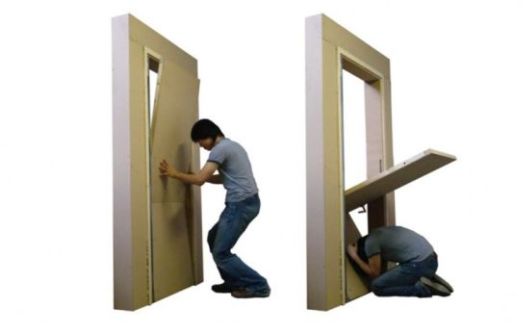 This brilliant idea is brought to us by a design student in Kingston University, who has created a special door that provides shelter in the event of an earthquake.
The door?s system allows it to fold in half, creating a roof under which we are protected from possible detachments. The door?s frame also holds a small survival kit: a flashlight, drinking water and medicine that could help us survive if we were trapped by the earthquake.
A good idea that can save lives.

A machine that lays down streets. Incredible but true. 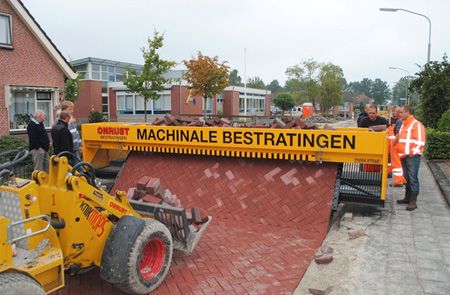 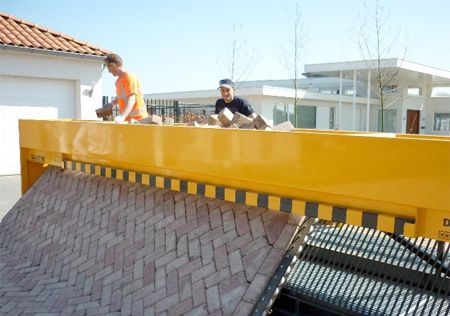 Here is a truly surprising idea: a machine that, literally, lays down streets. It?s name is Tiger Stone and, with the help of only a couple of workers, it can build 400 meters of streets in one day.
A Dutch company called Vanku BV is responsible for this original idea, that builds streets as if it were sowing rugs made of bricks or slabs, which are introduced in one end of the machine, and come out of the other ready to become pavement.

The milk carton that changes color before expiring 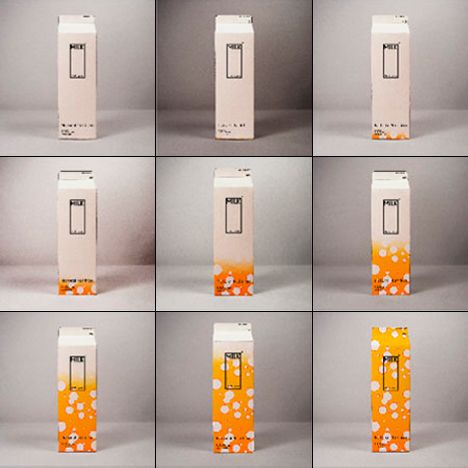 What a great idea designer Ko Yang has had with this milk carton that changes color telling us how fresh the milk is. The carton begins being white in color, and as the expiry date moves closer, it begins changing color to tell us we should drink the milk before it?s too late.
A brilliant way to help us consume our food without wasting any, something to which other ideators have already given some thought:
(31999) Expiry date for products that have been opened
(2255) Visual warning for expiry of food products

Underwater diving without getting wet 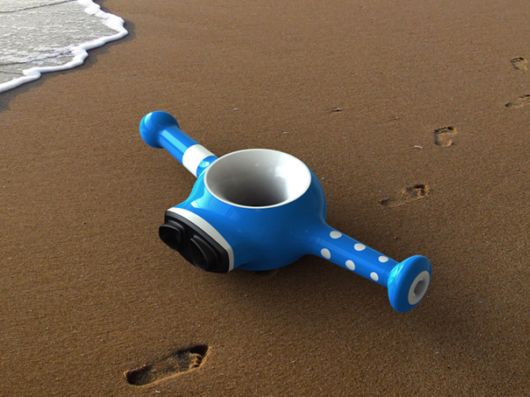 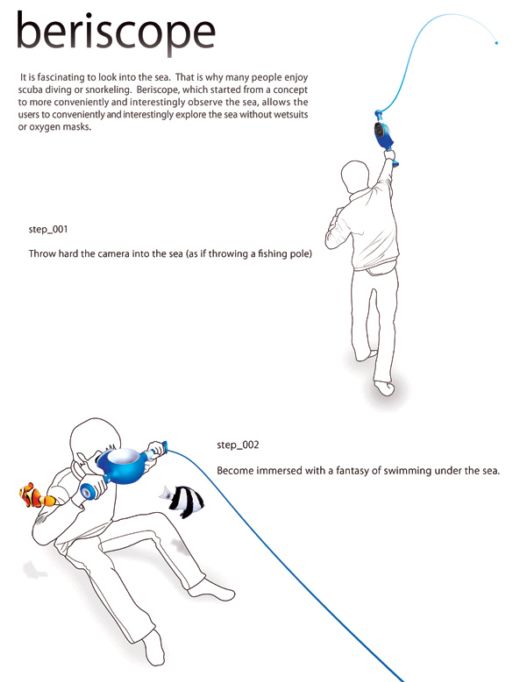 Sometimes ideas allow us to imagine fantastic things, and this concept is like that. Its name is Beriscope and it allows us to dive without getting in the water.
Who knows if designer Jaewon Choi?s dislike for cold water made him come up with this idea, but the fact is Beriscope saves us from experiencing those small inconveniences related to underwater diving or snorkeling. It also brings the marvels of the seabed to people who would otherwise have no access to them, be they elderly people, small children, or disabled people who cannot dive.
It has a camera at the end of a long cable that is thrown into the water as if fishing, once the camera is inside the water, all that is left is to enjoy all that is hidden in the bottom of the sea.
Via YankoDesing

A cellphone that runs on Coca-Cola. Incredible! 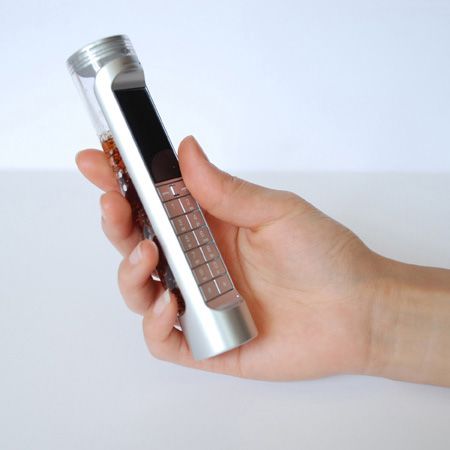 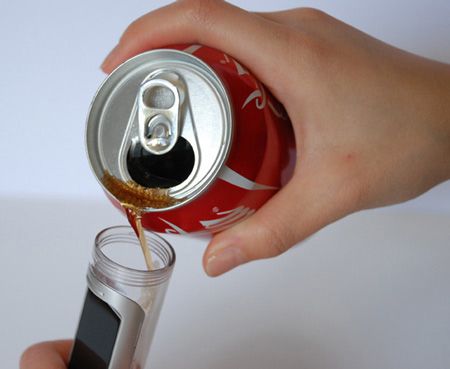 Designer Daizi Zheng brings us an interesting concept: a Nokia phone that runs on Coca-Cola. Yes, you read right. It may sound incredible, but it seems this eco-friendly cellphone model really works.
The designer has called it Nokia?green?phone and it works generating electricity through carbohydrates such as the sugar contained in this and other similar drinks. It does not pollute because the end-product of the process is water and oxygen. And to top it all off, Daizi herself assures us that this completely biodegradable battery can last up to 3 and 4 times the normal life of lithium batteries.
We?ll just have to find out.

We?ve already mentioned, on other occasions, a couple of similar ideas that have sprung up in our Community: My Bedside Chair and idea (7813) Purse/Handbag Holder in Restaurants.
Chairs for restaurants and other establishments that can hold a purse, bags, or any other personal belonging, keeping it away from bag-snatchers that are ready to take advantage of any distraction.
This new chair?s name is Stop Thief Chair and is marketed by Danish furniture manufacturer Dan-Form since September. They can be purchased through their official website, in 12 different colors, for 38£.
The idea is really just a slight variation made to the seat, that allows us to place any bag or purse under our legs, but I would definitely love to see them at the cafés I go to.

Take a seat wherever you like with this portable seat 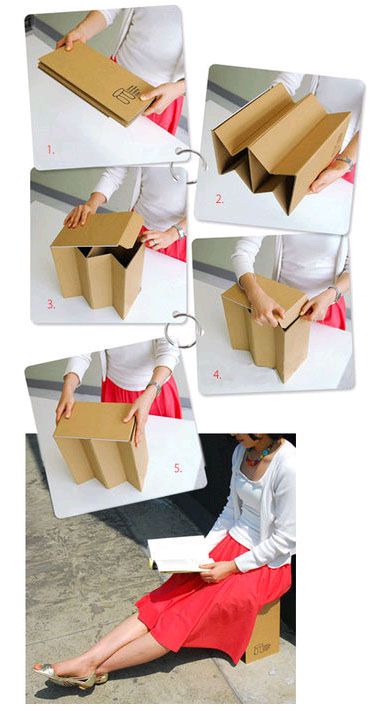 What a great idea it would be to always have a seat at hand to sit down and rest, something light and easy to carry. That?s just what Dolmen is, this clever seat made of cardboard, which -as always- comes from Japan.
It weighs only 360 grams and folds so that it can be carried in a purse or briefcase. Whenever you feel like sitting down and taking a breather, all you need to do is unfold it. For the time being, we can unfortunately only buy it in Japan, for the equivalent of approximately 7.50?, in 4 different colors.
Until it?s available elsewhere, we?ll just have to sit down and wait. 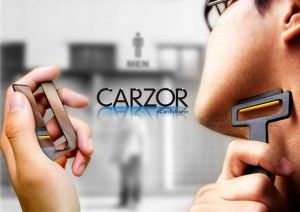 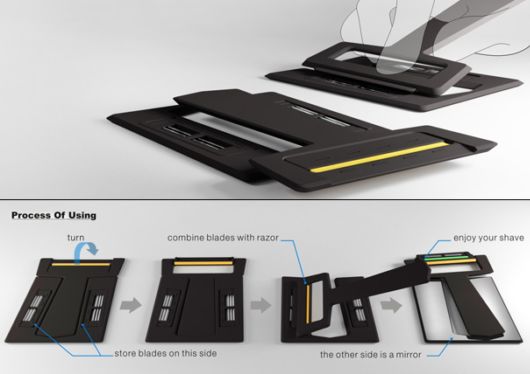 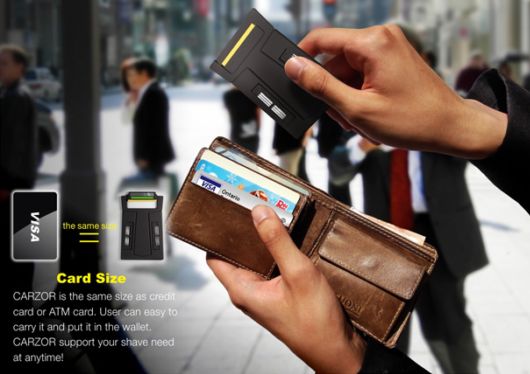 Small, light and simple. This is the perfect razor concept for today?s hectic, dynamic life. With this razor you can finally shave anywhere you like.
Its name is Carzor and is designed by Kuo Chia Hung. It is a portable razor, the size of a credit card, making it perfect for carrying in a wallet. It comes with two spare blades and, best of all, it includes a small mirror, so that you can shave at any time. It also includes a small filament that gives off scents such as mint, lemon, sandal, ocean or orange to avoid irritation and give some aroma.
We saw it in Yanko Design

The suitcase that becomes a scooter. Forget running around the airport. 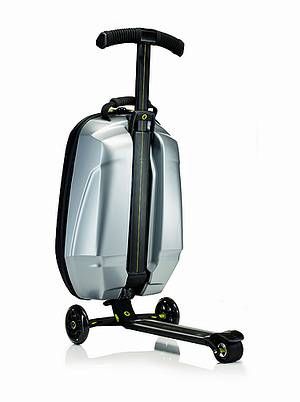 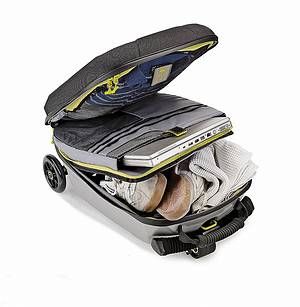 Do you travel frequently and hate having to run down never-ending corridors and terminals? Well, the people at Samsonite have joined forces with Micro Mobility to design this brilliant suitcase called Samsonite X Micro Mobility Trolley Scooter.
It is a suitcase that transforms into an useful and amusing scooter. It takes advantage of the suitcase?s two wheels, and the handgrip becomes a handlebar.
This is the end of having to run to catch your flight. 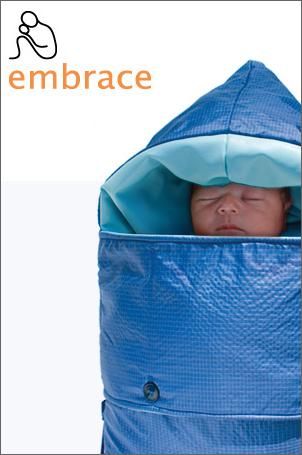 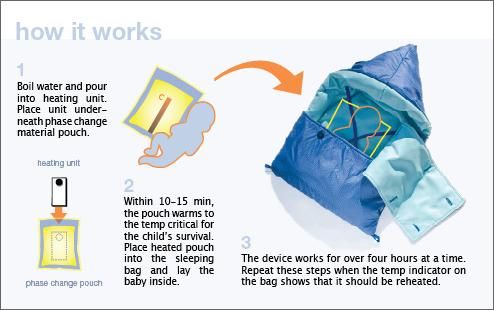 A group of scientists at Embrace have created a baby incubator that costs only 25$ and is specifically intended for use in developing countries, where close to 20 million low birth rate and premature babies are born every year.
A traditional incubator we might find in any hospital costs over 20,000$, which is far too expensive for a developing economy.
Embrace has the appearance of a sleeping bag and is activated with boiling water, it requires no electricity and is covered with a special material that regulates temperature.
It can work for approximately four hours, after which it must be reheated. It can even be sterilized and reused.
You will find all the information in the official website.

The brilliant idea of the 3-D plug 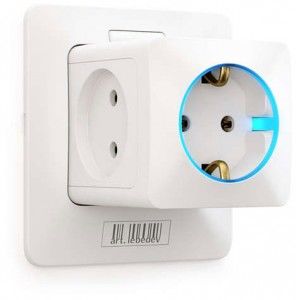 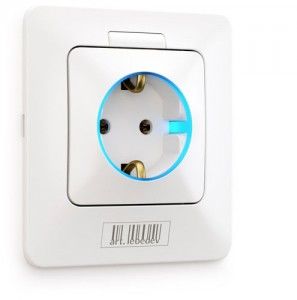 Now this is real genius! Stop for a moment and count how many power strips you have at home. They?re always in the way, are not at all aesthetic, and more often than not, they don?t have enough space for plugs because adaptors are too big for them.
This original and, above all, functional design known as Rozektus 3D is the solution to all these problems. Rozektus? 3D design transforms one plug into five, each on one of the Rozektus? faces so that none of the plugs is in the way of others. The concept for this cube-shaped socket was developed by Russian art collective Lebedev Studio.
And, best of all, if you only need one socket, it can simply be pushed inside the wall and out of the way.
>From what I?ve managed to find out, it is now available around Europe. Genius!

Stop smoking with the E-cigarette 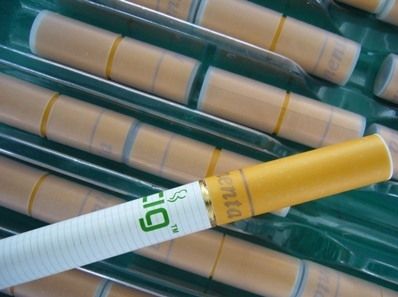 The electronic cigarette is driven by modern micro-electronic technology, and is not flammable. It consists of a small rechargeable battery and one only safe and replaceable cartridge containing water, propylene, glycol, nicotine, and tobacco aroma. None of these ingredients are considered cancer-causing agents.
When inhaling the cigarette, the air flux is detected by a sensor and a microprocessor activates an atomizer which, in turn, injects minute doses of the liquid compound into the air inhaled, producing a kind of vapor that simulates the effect of a real cigarette.
The electronic cigarette is an alternative to traditional cigarettes. Smokers will be able to smoke anywhere, in a way that is more advanced and will not disturb other non-smokers. A fine discovery made by vanguard evaporation micro-technology, that works with a simple rechargeable battery.
Rocío Bravo From Ideas4all

A good idea to help people with limited mobility 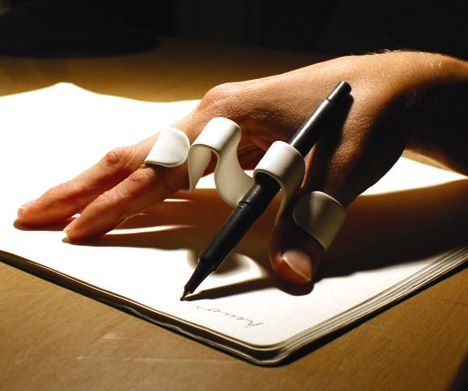 What you see in this photograph is called Slip Grips. It was designed by Stanton Burns, student of Auburn University (U.S.), and helps people with mobility problems in their everyday activities.
Slip Grips allows these persons to carry out simple actions such as write, hold tools and many more movements that can sometimes become an obstacle. This idea will help them become a little more independent.
Although it has not yet been marketed, we will surely see it in stores in very little time.
Maria Maza from ideas4all

Pin anything down without ruining it: Magnetic Push Pins 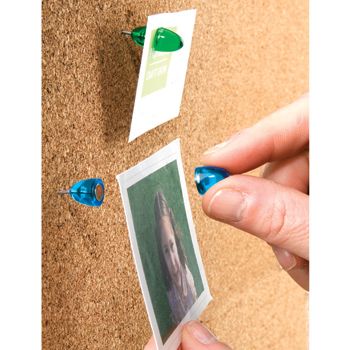 They?re called Magnetic Push Pins and I think they?re a brilliant idea that will save many of us from having to push holes into all those important documents or photos we hang from cork boards and somehow need to keep within view.
This invention is based on the simple concept of placing a magnet on a thumbtack. This allows you to pin it anywhere you like, using the magnet to hold whatever you pin, without ruining it.

Pajamas that can tell if your baby has a fever 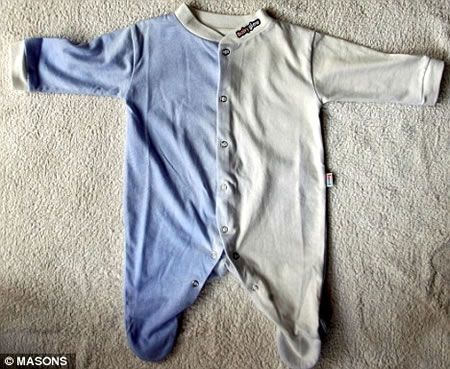 This idea will make life easier for all parents who, sometimes, simply don?t understand why their baby is crying, as well as help employees at hospitals and kindergartens at their jobs.
These baby?s pajamas called Babyglow, designed by Chris Ebejer, show us if our baby has a fever, by changing color when our child?s temperature is higher than 37ºC. Parents will instantly realize what is wrong with their baby, and remedy the situation before it worsens.
It comes in various colors, but turns white if the child?s body temperature becomes higher than normal. The good news is that it is not just a good idea, but is already being sold in the United Kingdom for 20 Euros.

Bergmönch, a bike in your rucksack 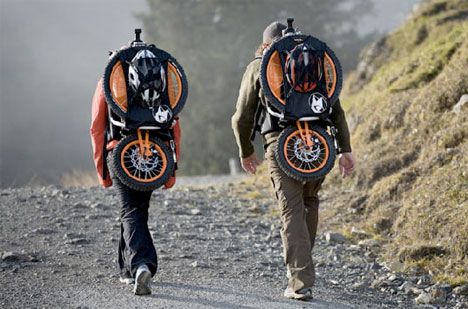 When talking about the idea we are going to present you, maybe we should talk about a bike transforming into a rucksack.
In the last years it is very common to come across with novel and original bike designs, and even with contests trying to find the definite bike. All these designs use to share one common point: what is looked for is an urban bike.
It is true that bike are the most sustainable transport system known (unless you consider walking to be a transport system); for this reasons, bikes are more than necessary, and all ideas helping to alleviate the problems a bikers encounters in the big city are welcome, like how to park one´s vehicle.