Stunning pictures of a solar corona where temperatures around Sun reach 2,000,000c

Shooting a million miles or more out into the hard, cold vacuum of space, this fiery halo is one of the wonders of the universe.

Whipped into gigantic swirls by the Sun’s ferocious magnetic fields, the shell of super-hot gas is as beautiful as it is dangerous.

It’s called a corona and can’t normally be seen because of the brightness of the Sun, a broiling sea of hydrogen gas at 10,000c. But during a solar eclipse, the Moon blocks out the Sun and the corona is spectacularly revealed. 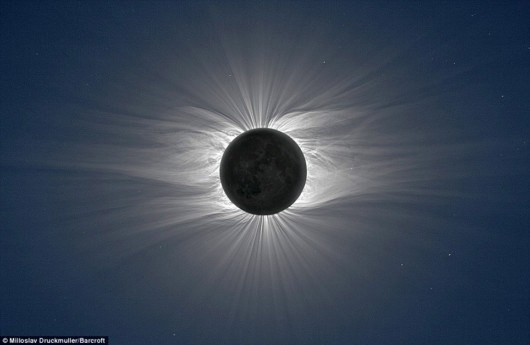 A photo montage captured during a solar eclipse over the Marshall Islands in July 2009. The beautiful image shows the solar corona that makes up the sun’s ‘atmosphere’ in amazing detail as the sun passes behind the Moon

This extraordinary image is a montage, digitally stitched together from 38 photos taken in Mongolia in August 2008 by veteran eclipse hunter Miloslav Druckmuller.

Even though there are small pink areas resulting from over-exposure, the result is still the clearest picture yet of this extraordinary phenomenon. To understand it is to come closer to grasping the awesome power of the Sun.

This flaming ball of hydrogen and helium gas, at 865,000 miles across, is 100 times wider than the Earth, with a million times its volume. Powered by nuclear reactions in its core, it is the most majestic object in our skies. 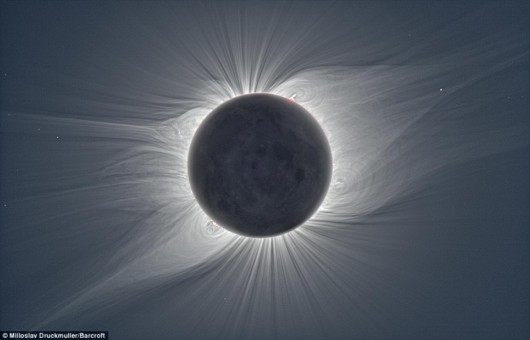 This picture was created from 38 individual photographs at ISO 100, exposure time was between 1/125 seconds and 8 seconds 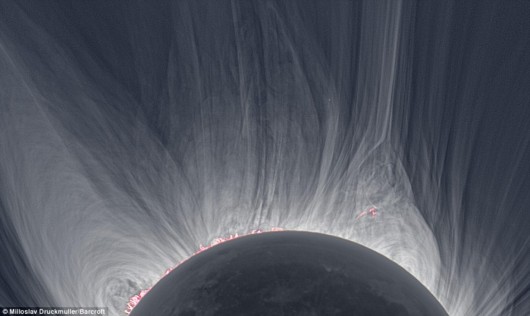 As well as being very hot, the ionised gas of the corona (called plasma) has a superthin consistency. It is less than a billionth of the density of the hydrogen that makes up the main ball of the Sun

As hot as the Sun is, the corona is 200 times hotter – more than a million degrees celsius. Why this should be is a mystery. Some believe it is the result of a form of heating called induction – the same thing that powers hi-tech cooking hobs.

As well as being very hot, the ionised gas of the corona (called plasma) has a superthin consistency. It is less than a billionth of the density of the hydrogen that makes up the main ball of the Sun.

The odd result of this is that if, by some magic, you were to touch the corona, you would freeze rather than fry.

Despite its thinness, the corona can pack a deadly punch. Occasionally, the Sun’s surface erupts in a solar quake, a paroxysm of gigantic storms and flares. Sometimes these are powerful enough to eject vast blobs of corona gas into space at millions of miles per hour. 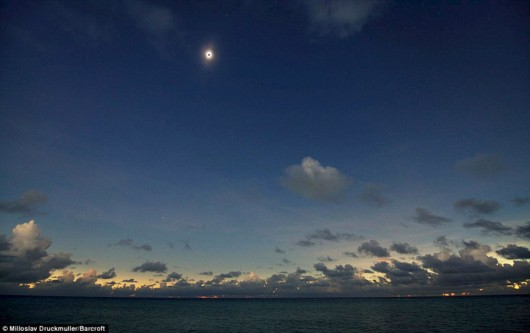 This was the view from the Marshall Islands for Mr Druckmuller where the pictures were taken. He has travelled the world chasing eclipses

In 1859, one such eruption hit the Earth square on, generating a brilliant aurora in the night sky (bright enough to wake sleeping Gold Rush miners in the Klondyke) and shorting out much of the world’s nascent telegraph system.

Though solar storms can’t hurt humans directly, the 1859 event was powerful enough to melt copper cables. Should such an event happen today, it would cause utter chaos and could well precipitate an economic meltdown.

Our electricity grids would be fried and phone and internet lines would be shut down.

But what’s the likelihood of that happening? Unfortunately, it’s impossible to say – though some scientists predict another corona eruption in the summer of 2012, when the Sun is predicted to enter a new ‘manic’ phase of turbulence. 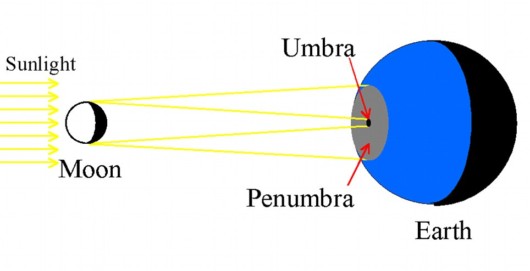