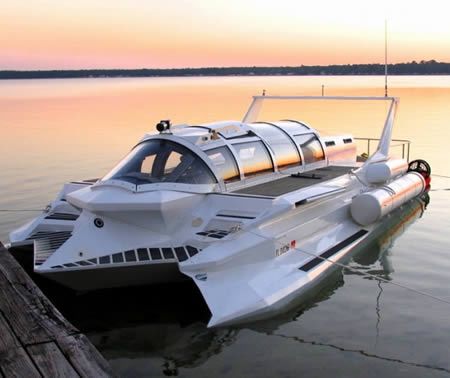 Not even James Bond would scoff at the beautiful Hyper-Sub. After all, how could he not want to step foot onto a $3.5 million submersible powerboat? This craft designed by Marion HSPD, will finally be heading to the production line. Of course $3.5 million may be a tough price tag to cope with, but you’re getting a rather powerful little toy in exchange.

On the powerboat side, it’s a heavy-duty, 31-ft. surface-cruiser with an enclosed cabin. Powered by twin 440 hp inboard diesels for a total output of 880 hp, the Hyper-Sub has a maximum surface speed of 40 knots and a maximum surface range of 500 miles. In dive mode the Hyper-Sub can plunge up to 250 feet, and offers umbilical SCUBA support. 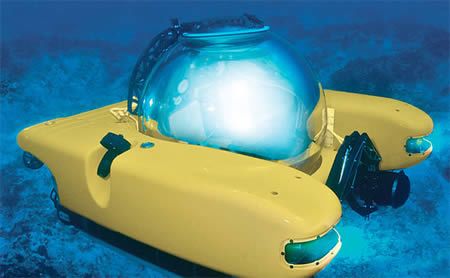 This is another personal submarine, and it is yellow. Unfortunately, it is not big enough so we all can live in it, as it only seats two people with upright seating. It is good for going 1,000 feet under the water, and the life support is good for six hours. It also features a 120 volt and 24 volt battery bank, two 3 horsepower main thrusters, two 3 horsepower vertical thrusters, four external halogen lamps, VHF communication radio, GPS, as well as a climate controlled sphere. I’m not certain what that means, but I’m guessing you can make it very warm or very cool in there.

I don’t know how far you could go with this guy from the shore, but man, I would love to see it for myself. After all, they only cost a low price of?two million dollars? Well, I knew that this type of hobby wouldn’t be cheap. 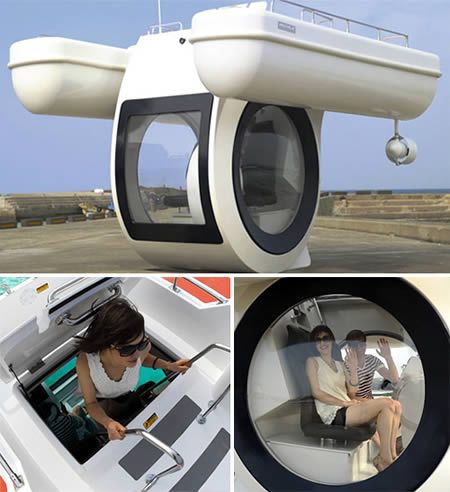 Technically this isn’t a submarine. This is not to say that the EGO semi-submarine does not travel underwater. In fact, the cockpit is always that way. However, the upper part of the boat remains above the water all the time. This reduces the risk factor of traveling underwater, and makes it very easy to control. The company website says that ?you don’t even need to know how to swim?. I say that it probably wouldn’t hurt.

The clear view gives the user a terrific view of the aquatic life, which is perfect for those who want to see fish up close without getting wet. Best of all, the EGO is eco-friendly as it is mostly electric-powered. On a 6-10 hour charge, the user is able to get about four hours worth of cruising time. The EGO semi-submarine is made by a company called RAONHAJE, and the product’s official website does not have a price. All I have to say is: ?if you have to ask, then you can’t afford it?. 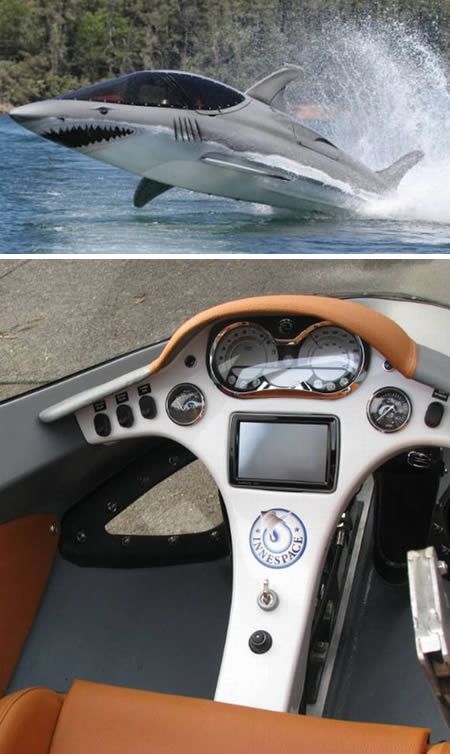 Called the Seabreacher X, this incredible shark-shaped water submersible boasts "a 260 hp supercharged engine, propelling the vessel to a top speed of 50 mph on the surface and 25 mph below."

The Seabreacher X can sustain high speed dives and then breach the surface, launching the entire vessel clear out of the water. The new fully vectored thrust system mimic the tail articulation of real aquatic animals like sharks and dolphins. The custom tuned exhaust system also gives the vessel a more throaty growl as it tears across the surface. 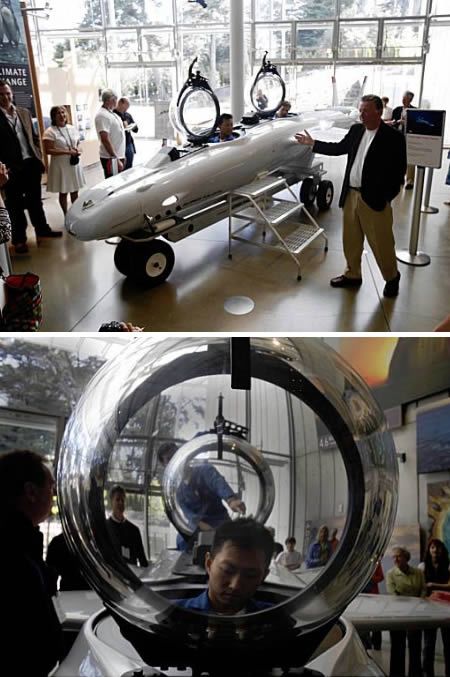 It has a single rear-mounted propeller, looking much like an electric fan, drives the vessel, and a 48-volt lithium phosphate battery provides power. Its thick pressure hull is a carbon-epoxy mixture, and the two passengers aboard ride seated in cockpits fore and aft, observing their watery surroundings through thick Plexiglas canopies.

According to Hawkes, the craft ?flies? just like a jet plane, with electric motors controlling for roll, pitch and yaw. It can fly downward at a maximum of 200 feet per minute, upward at twice that speed and keep flying for a maximum of five hours at 4 knots ? about 4.6 mph. John McCosker, [California Academy of Sciences] chair of aquatic biology, said the agile submarine will enable him and his colleagues for the first time to follow along with the travels of ?whales and dolphins and even super sharks ? maybe even the mysterious giant squid.? 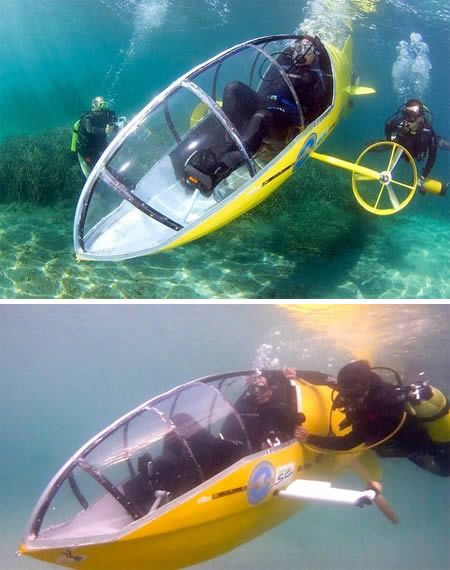 Scubster is a human powered personal submarine made from carbon fiber. Designed by Stephane Rousson to take part in the International Submarine Race, the sub currently travels at a maximum speed of 6 mph and can reach depths of 20 feet.

14-year-old Swiss teen and naval enthusiast Aron Kreier spent 4 years to build his own pedal-powered submarine made from parts of a pig trough. 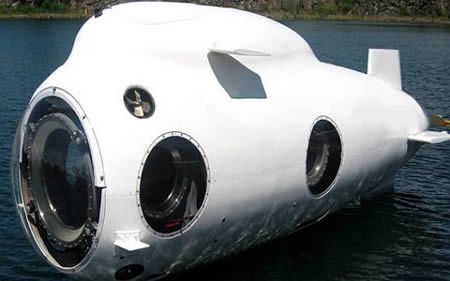 It seems like every rich guy in the world has a yacht these days. What ever happened to exclusivity? What’s a billionaire to do if he wants to travel around the world’s oceans in something so expensive and ludicrous almost no one else has one? A private submarine, naturally. The Nautilus VAS Luxury Submersible is a private submarine that’s designed to launch off of yachts. It’s got military-grade construction, so if you somehow get into a situation where people are shooting at you, you should be safe. And hey, it has a minibar and a stereo inside! Jaques Cousteau, eat your heart out. Oh, and it’ll set you back $2.7 million. Just FYI. 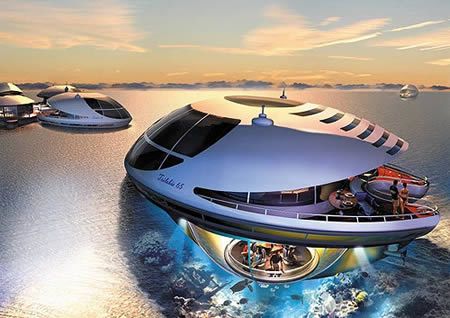 Italian naval architect Giancarlo Zema dreamed big ? really big when he designed a part yacht part submarine house called Trilobis 65. At first glance, the Trilobis looks as if it would be more at home soaring into the sky than plying the waters of atolls, bays and maritime parks. Looking at a computer image of the bow conjures up visions of the flying saucers in 1950s science fiction films. The Trilobis’s blueprints, however, reveal a nautical heritage that reaches back to the humble dugout while simultaneously embracing 21st century technologies that include high-strength composites and nonpolluting hydrogen fuels. 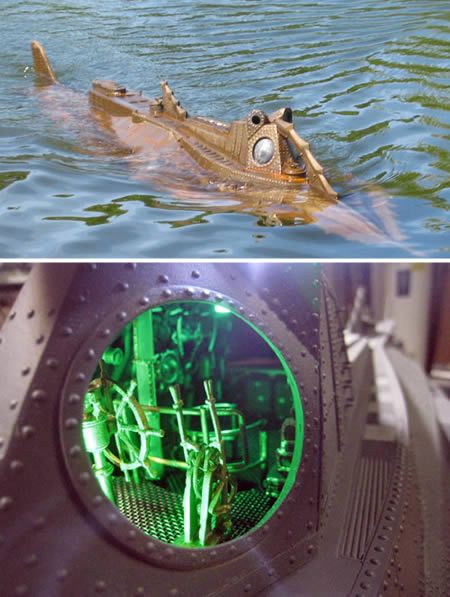 Created by Bob Martin, this remote controlled submarine is a replica of the Nautilus submarine from 20,000 Leagues Under the Sea. The remote controlled, 66.5-inch sub is based on Disney’s 1:32 scale replica kit. The Steampunk submarine has been built painstakingly to follow minor details in construction and in function. It has a watertight cylinder, ballast tank, and servo control; all powered by a lithium ion battery to ensure that the submarine is functional.