Cell phones do emit radiation. No one knows definitively whether it’s enough to worry about. 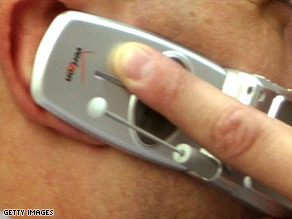 So what are we all to do until they figure it out? After enough interviews with physicists, engineers and doctors one common line of reasoning can be reached. Cell phones do emit radiation. No one knows definitively whether it’s enough to worry about. Mobile phones meet federal safety limits, but if you’re still worried, there are some simple steps you can take to lower your exposure to radiation.

This was, without question, the favorite alternative of the experts. Nothing is near your head. Hold it away from a minimum of a few inches. A foot or two is ideal. Every inch you can get away from your body, the radiation reduces very quickly. Hold it out two inches, and the radiation drops by a factor of four. Hold it out four inches, and it drops by a factor of 16. In other words "every millimeter counts."’

Using a wired headset and a ferrite bead on the cord can help reduce your radiation exposure.

2. Use a wired headset with a ferrite bead

A ferrite bead is a clip you put on the wire of a headset. The concern is that the wire itself emits radiation into your ear. The bead is designed to absorb the radiation so you don’t. Of course, if the phone is in your pocket or clipped to your belt, all bets are off, because the phone itself will be radiating into your body. So if you’re worried about radiation, keep the phone as far away as possible, and do your best to make sure the wire isn’t touching your body.

3. Use a Bluetooth earpiece

A Bluetooth earpiece still has radiation, but it’s at least 100 times less than the radiation you get when you hold a cell phone to your head. Bluetooth is only whispering radiation into your ear. The problem is, some people wear it all the time

4. Use a "hollow tube" earpiece

It’s just like a regular wired earpiece, except the last six inches or so — the part next to your ear — is a hollow tube. There’s no wire under the plastic. "You’re getting the sound through the air. You’re not dependent on radiofrequency waves," said Dr. David Carpenter, director of the Institute for Health and the Environment at the University of Albany.

5. Get a phone with less radiation

Phone radiation is measured in specific absorption rate, or SAR. Compare the SAR for phones and select the one which is safer