The art of conversation takes practice, and is not as hard as you might think. 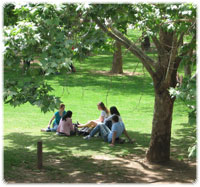 It will take some knowledge, practice, and patience, and you can learn to relax and enjoy a great conversation. With these tips you will be well on your way to having a good, meaningful and entertaining conversation with anyone!

Make a good first impression. Smile, ask questions that require more than a yes/no answer, and really listen. Maintain eye contact and keep as friendly and polite as possible.

Listen. This is the most important part of any conversation. You might think a conversation is all about talking, but it will not go anywhere if the listener is too busy thinking of something to say next. Pay attention to what is being said. When you talk to the other person, injecting a thought or two, they will often not realize that it was they who did most of the talking, and you get the credit for being a good conversationalist ? which of course, you are!

Find out what the other person is interested in. You can even do some research in advance when you know you will have an opportunity to talk with a specific person. Complimenting them is a great place to start. Everyone likes sincere compliments, and that can be a great ice-breaker.

Forget yourself. Dale Carnegie once said, ?It?s much easier to become interested in others than it is to convince them to be interested in you.? If you are too busy thinking about yourself, what you look like, or what the other person might be thinking, you will never be able to relax. Introduce yourself, shake hands, then forget yourself and focus on them instead.

Practice active listening skills. Part of listening is letting the other person know that you are listening. Make eye contact. Nod. Say ?Yes,? ?I see,? ?That?s interesting,? or something similar to give them clues that you are paying attention and not thinking about something else ? such as what you are going to say next.

Ask clarifying questions. If the topic seems to be one they are interested in, ask them to clarify what they think or feel about it. If they are talking about an occupation or activity you do not understand, take the opportunity to learn from them. Everyone loves having a chance to teach another willing and interested person about their hobby or subject of expertise.

Paraphrase back what you have heard, using your own words. This seems like an easy skill to learn, but takes some practice to master. Conversation happens in turns, each person taking a turn to listen and a turn to speak or to respond. It shows respect for the other person when you use your ?speaking turn? to show you have been listening and not just to say something new. They then have a chance to correct your understanding, affirm it, or embellish on it.

Consider your response before disagreeing. If the point was not important, ignore it rather than risk appearing argumentative. If you consider it important then politely point out your difference of opinion. Do not disagree merely to set yourself apart, but remember these points:

It is the differences in people?and their conversation?that make them interesting.

A person is interesting when they are different from you; a person is obnoxious when they can not agree with anything you say, or if they use the point to make themselves appear superior.

Try to omit the word ?but? from your conversation when disagreeing as this word often puts people on the defensive. Instead, try substituting the word ?and?, it has less of an antagonistic effect.

Consider playing devil?s advocate ? which requires care. If your conversation partner makes a point, you can keep the conversation going by bringing up the opposite point of view (introduce it with something like ?I agree, and??). If you overuse this technique, however, you could end up appearing disagreeable or even hostile.

Do not panic over lulls. This is a point where you could easily inject your thoughts into the discussion. If the topic seems to have run out, use the pause to think for a moment and identify another conversation topic or question to ask them. Did something they said remind you of something else you have heard, something that happened to you, or bring up a question or topic in your mind? Mention it and you?ll transition smoothly into further conversation!

Know when the conversation is over. Even the best conversations will eventually run out of steam or be ended by an interruption. Shake hands with the other person and be sure to tell them you enjoyed talking with them. Ending on a positive note will leave a good impression and likely bring them back later for more!

Be sincere! Compliments are great, but too much flattery is obvious and will reveal you as being insincere.

Beware of topics that can be inflammatory ? such as religion and politics ? and don?t venture into them unless you know the person has roughly the same convictions as you, or the circumstances otherwise allow for pleasant discussion. Again, it?s fine to disagree and can be nice to talk about differences, but it can also be a quick step toward an argument.

Try not to argue! You do not have to agree with everything someone says, but you do not have to tell them all about how you disagree. If you feel the need to explain an opposing viewpoint, express it simply and without putting the other person on the defensive. It is better to simply change the subject in a casual conversation than to get involved in an argument.

Try not to nod or respond with ?Yes? and ?I see? so much. It might make the person think you are bored and sometimes it may seem like you are rushing them along. Never say anything hurtful or offensive to the other person, this may project a bad feeling between you.

If it is a planned conversation, try listening to the news in case you run out of thing to say, it is always a good solution.

Also try not to cut the person off mid-sentence. It seems disrespectful and it makes it seem like what you have to say is more important than what the other person has to say. Let the person finish their thoughts and then continue on with thoughts of your own.