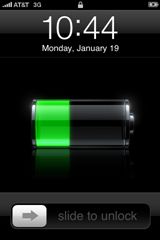 If you?re expecting a call and your battery icon starts blinking, the first thing you should do is find a charger. But if that?s not an option, here are ten things you can do to hang on. We?ll skip the usual tips about the ?memory effect? and which battery type is better NiCd or Li-Ion because you don?t really have a choice in that.

Turn Down Screen Brightness
The screen is one of the most power-consuming parts of the mobile phone. The lower the brightness, the lesser power it needs. Keep it as low as you can, so long as you can still see it! Also, some phones like the E61 and the BlackBerry Pearl come with auto-adjust features that increase the brightness in brightly lit areas and dim it in low-light areas. If you?re setting the brightness low, make sure that auto-adjust is turned off.

Don?t Use Animated Wallpapers or Screensavers
The animations in wallpapers and screensavers can drain a bit of battery as they also consume a wee bit of CPU. Turn them off.

Turn Off Keypad Lights
If you?ve been using the phone for a while, you may be able to use the keys without seeing them. If this is the case, the keypad backlight can be turned off. However, not a lot of phones support this, but it?s worth considering if your phone does.

Decrease Screen Standby Time Out
The time till your screen dims out and/or gets turned off is configurable in most phones. 10 seconds is good, 5 seconds is better. Set it as low as you can go without it becoming inconvenient.

Turn Off Vibration
Probably the second most power-consuming feature of any mobile phone is the built-in vibration alert. See if you can do without it.

Turn Down Ringer Volume, Keypad Tones and Speaker During Calls
If you?re mostly indoors, like in the office or at home, a low ringer volume can go a bit towards saving your battery. Most phones also have DTMF-like keypad tones, which are not necessary if the keypad has decent tactile feedback. I keep them turned off most of the time you can try it too. Volume of the earpiece when you?re on a call can also be lowered, and that helps too.

Disable Voice Clarity / EFR / Voice Privacy
Almost all phones now do Enhanced Full Rate (EFR) for voice communication that consumes a little more power. In most cases, the enhanced quality of EFR doesn?t make a difference thanks to the high noise levels in our city. Keep it off, you probably won?t miss it. Some phones (mostly Samsungs) have a ?voice privacy? feature which can also be turned off to save battery.

Turn off 3G / GPRS / EDGE
Most 3G/UMTS/WCDMA phones keep searching for 3G coverage by default. In India, they?ll keep searching till 2008, draining your battery, so go to the network selection screen and choose GSM-only. If your phone has a secondary camera near the screen, it?s a 3G phone. Check your phone?s specs on the website if you aren?t sure. Sometimes, even regular GPRS or EDGE connections stay active in the back, so make sure you specifically disconnect when you?re done browsing the web.

Use Bluetooth and WiFi Only While Transferring
If you only use Bluetooth occasionally to transfer files to and from other devices, there?s probably no point keeping it on all the time. Most phones only come with an on/off setting for Bluetooth, unlike the ?Turn on for 10 minutes? setting available for Infrared in some phones (mostly Sony Ericssons). People tend to forget about Bluetooth being left on after transferring the file avoid doing this. Same goes for WiFi, if you?re phone has that.

Here?s another tip find a USB cable if your phone supports recharging via USB. The Motorola RAZR/KRZR/SLVRs and most Windows Mobile Smartphones have a standard miniUSB slot that can use the same cable as most digital cameras. You?re more likely to find one of these lying around somewhere than a charger for your phone, unless it?s a Nokia, of course.

Finally, the last tip is not very recommendable, but it is something to consider if you?ve tried everything else above: don?t use the phone too much. Of course, you can?t use the camera and media features (most Samsung phones won?t even let you, if the battery is low) but you can also be a bit choosy while answering incoming calls not all of them need to be answered. This is even more true in case of unknown numbers!