Search
Menu
Search
coldest place, from the highest to the lowest and many more! 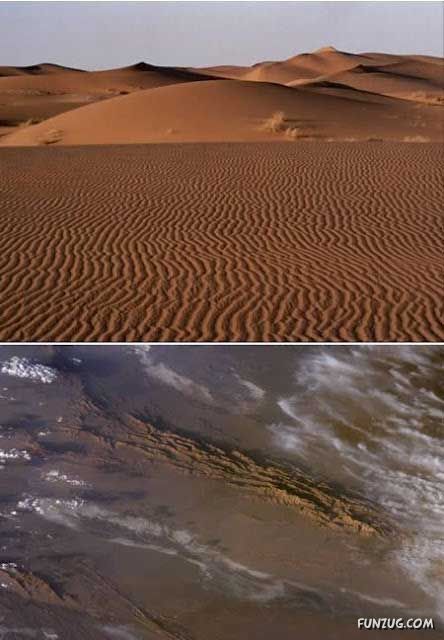 There is a big discussion about the hottest spot on Earth. Many believe it is in Al Azizyah, Libya, with a recorded temperature of 136 degrees Fahrenheit (57.8 Celsius), and the second hottest place being in Death Valley, California, USA, where it got up to 134 Fahrenheit in 1913. But according to other sites, a NASA satellite recorded surface temperatures as high as 71 °C (159 °F) in the Lut desert of Iran, supposedly the hottest temperature ever recorded on the surface of Earth. This region, which covers an area of about 480 kilometers, is called Gandom Beriyan (the toasted wheat). 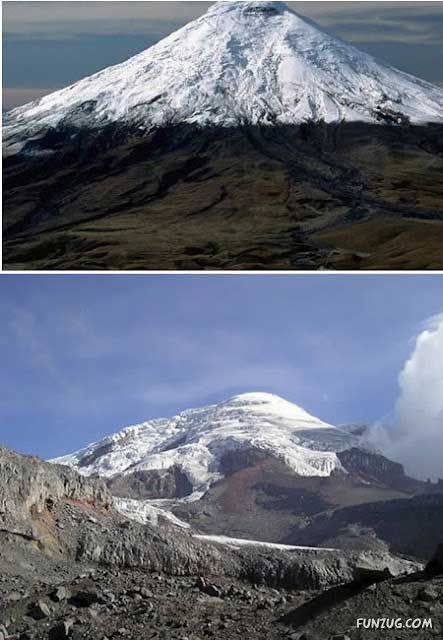 But not many people know about Mt Chimborazo in Ecuador with an altitude of 6,310 meters (20,703 feet), which is less than Mount Everest; however, Chimborazo has the distinction of being the highest mountain above Earth’s center. This is because Earth is not a sphere – it is an oblate spheroid. As an oblate spheroid, Earth is widest at its equator. Chimborazo is just one degree south of Earth’s equator and at that location it is 6,384 kilometers from Earth’s center or about 2 kilometers farther from Earth’s center than Mount Everest.

Tristan de Cunha (UK): most remote inhabited archipelago on Earth at 2,000 miles from the nearest continent 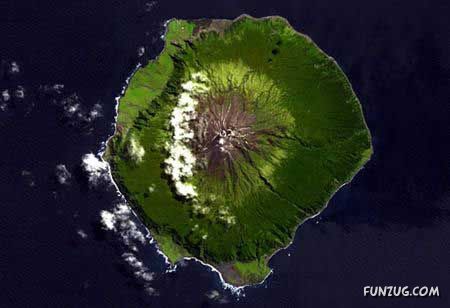 The most remote inhabited island group in the world, Tristan de Cunha in the southern Atlantic Ocean, is so tiny its main island has no airstrip. Home to 272 people sharing just 8 surnames, inhabitants suffer from hereditary complaints like asthma and glaucoma. Annexed by the United Kingdom in the 1800s, the island’s inhabitants have a British postal code and, while they can order things online, it takes a very long time for their orders to arrive. But then, that’s the trade off for having your own island settlement some 2,000 miles from the nearest continent. (Link | Photo) 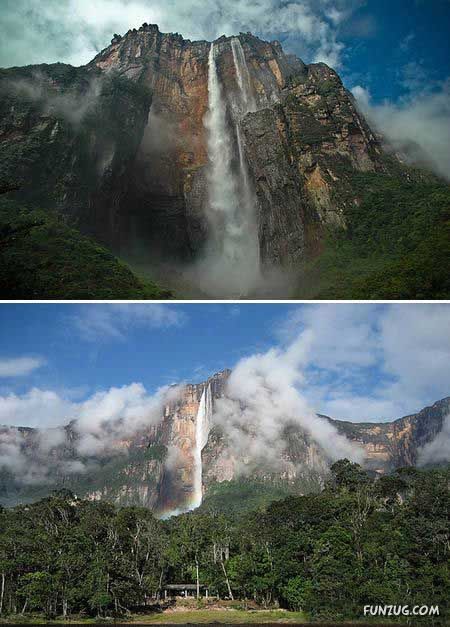 Angel Falls (Salto Ángel) in Venezuela is the highest waterfall in the world. The falls are 3230 feet in height with an uninterrupted drop of 2647 feet. Angel Falls are located on a tributary of the Rio Caroni. The falls are formed when the tributary stream falls from the top of Auyantepui (a tepui is a flat-topped structure surrounded by cliffs – similar to a mesa). 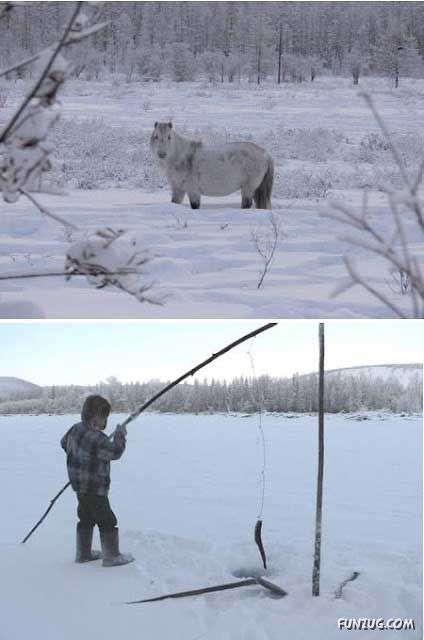 Oymyakon is a village in Oymyakonsky Ulus of the Sakha Republic, Russia, located along the Indigirka River, 30 kilometers (20 mi) northwest of Tomtor on the Kolyma Highway. The population is 800 people. Oymyakon is known as one of the candidates for the Northern Pole of Cold, because on January 26, 1926, a temperature of −71.2 °C (−96.2 °F) was recorded there. This is the lowest recorded temperature for any permanently inhabited location on Earth. It is also the lowest temperature recorded in the Northern hemisphere.

The lowest temperature ever recorded on Earth was -129 °F in 1983, at the Russian Base Vostok in Antarctica. 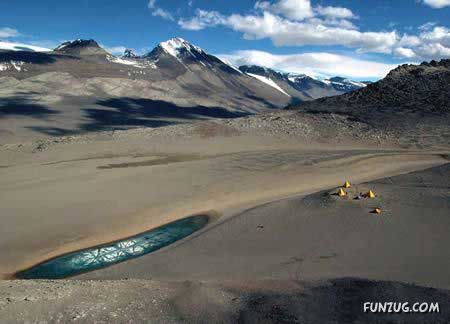 One interior region of the Antarctic is known as The Dry Valleys. These valleys have not seen rainfall in over two million years. With the exception of one valley, whose lakes are briefly filled with water by inland flowing rivers during the summer, the Dry Valleys contain no moisture (water, ice, or snow). The reasons why the Dry Valleys exist are the 200 mph Katabatic down winds which evaporate all moisture. The dry valleys are strange: except for a few steep rocks they are the only continental part of Antarctica devoid of ice. Located in the Trans-Antarctic Range, they correspond to a mountain area where evaporation (or rather, sublimation) is more important than snowfall, thus all the ice disappears, leaving dry barren land.

Another driest place is the Atacama Desert in Chile, some parts of which have received absolutely zero precipitation in centuries. Parts of the Atacama Desert may actually exceed the dryness of most of Antarctica, though data from the latter is insufficient to tell. 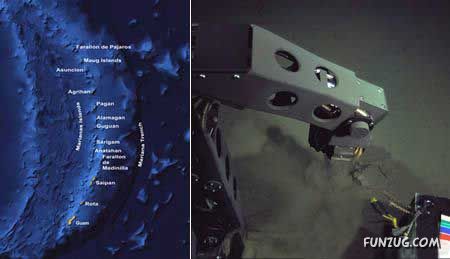 Challenger Deep in the Mariana Trench (or Marianas Trench) is the deepest point in Earth’s oceans. The bottom there is 10,924 meters (35,840 feet) below sea level. If Mount Everest, the highest mountain on Earth, were placed at this location it would be covered by over one mile of water. The only people to have ever explored this trench were Jacques Piccard and Don Walsh. At the bottom they were seven miles down and all around them eight tons of pressure. They observed fish, shrimp and other creatures living on the bottom of the sea floor. (Link | Photo) 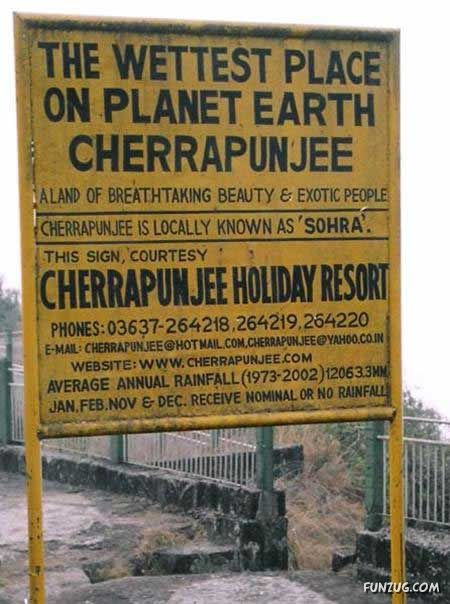 Cherrapunji, North-Eastern India is thought for many years to be the wettest place in the world. Here 10,820mm rain falls on average in a year. Unlike Colombia where the rain falls throughout the whole year, Cherrapunji gets most of its rain during the ‘south-west monsoon’, or wet season, between June and August. Cherrapunji does hold the record for the wettest month on record, recording 9,296mm in July 1861. Actually, between 1860 and 1862 Cherrapunji was incredibly wet; between August 1st 1860 and July 31st 1861 (which overlaps parts of 2 wet seasons) 26,467mm rain fell. In the calendar year 1861 22,987mm rain fell, of which 22,454 fell between April and September. 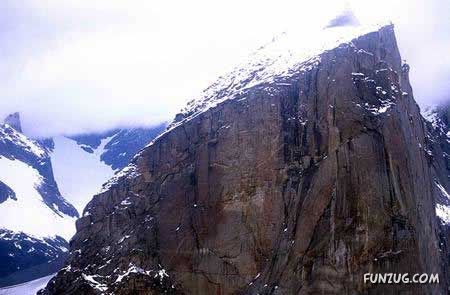 Mount Thor, in Auyuittuq National Park on Baffin Island, Nunavut, Canada, presents a 4,100 foot pure vertical drop. Mt. Thor is Canada’s most famous peak, and it’s made of pure granite. It’s a favorite of thrill seekers and climbers. Mount Thor was first climbed in 1953 by an Arctic Institute of North America team. There have been a few recent rappel expeditions, with one fatality in 2006. (Link) 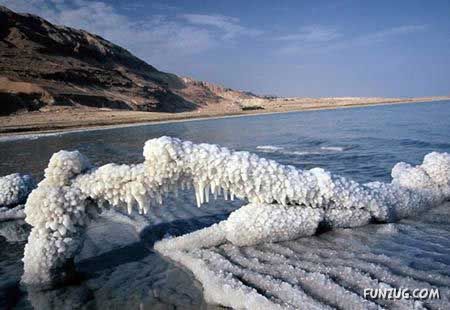 The Dead Sea is the lowest elevation on Earth’s surface on dry land, its surface and shores are 422 meters (1,385 ft) below sea level. On the border of Jordan and Israel, the road around the Dead Sea also happens to be the lowest road on Earth. Famous for its salinity (over ten times that of the Mediterranean Sea), the Dead Sea is said to be home of the first health retreat. Because of the extreme salt content, no life can survive in the sea, hence the name.