Waterfalls have been omnipresent, not just in Bollywood films but in life in general, as a picture of serenity and calm. As a stage in the life of a river stream, it’s a natural water feature surrounded by the lush greenery of the hill sides, reinforcing the aestheticism of water abiding by the laws of nature and gravity. Take a look at these 19 beauties to see what we mean.

If you’re on your way to the Rohtang Pass from Manali, you will for sure come across this waterfall along the Manali-Leh Highway. It’s 16 km away from the popular hill station and is a 20-minute bus ride away.

Seat yourself on one of the rocks and watch the cascade roll by. "Life is a roller-coaster, you just gotta ride it" – Ronan Keating 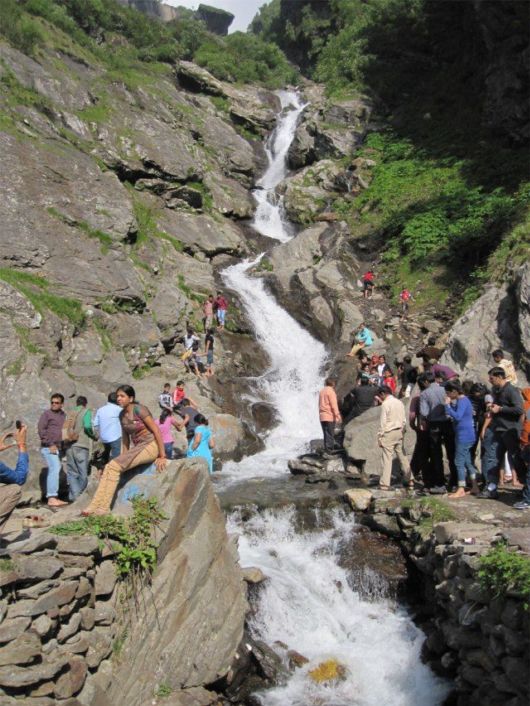 2. Dudhsagar, Goa
Flowing down the sides of the Western Ghats in Goa, the Dudhsagar was named after the legend of a bathing princess who poured a jug of milk over herself to cover her n*ked body while being ogled at by a pervert prince.

Another reason is the sheer intensity of the waterfall with bubbling white gushes which look like streams of milk pouring down the sides of the mountain side. Standing at a height of 600 metres, it is located at the Goa – Karnataka border and attracts a steady stream of visitors who visit during the monsoon season. Trekking along the mountainside is another popular activity. 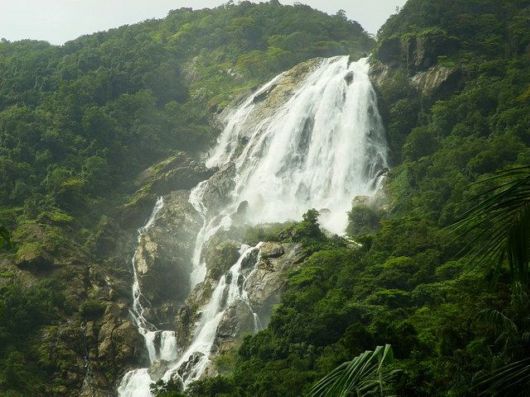 3. Talakona Falls, Andhra Pradesh
Located in the Nerabailu village of Chittoor District and standing 270 feet tall, this is the highest waterfall in this southern state. It is of religious significance due to the close proximity of several temples, the most famed of which is the Tirupathi in neighbouring Tamil Nadu (58 km away).

The Talakona forests are home to some of the most endangered species in India, such as the porcupine, mouse deer, panther, Chital and Golden Gecko. There are several trekking routes, of different levels of difficulty, leading to the summit of the hill. A 240 metre long canopy walk about 40 metres in height, is a thrilling experience for adventure seekers. 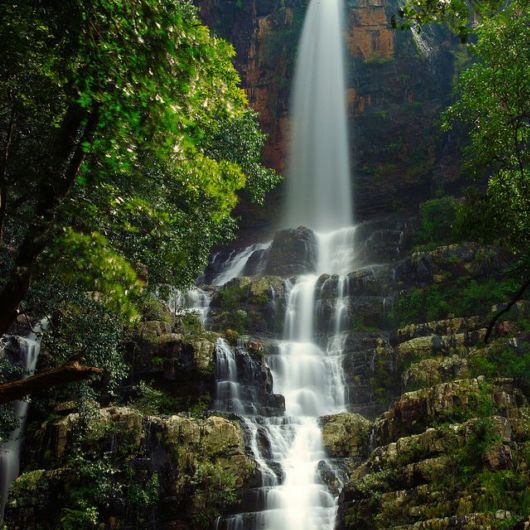 4. Jog Falls, Karnataka
The second highest waterfall (253 metres) in India, the Jog falls are located in the Shimoga district and is an offshoot of the Sharavathi river.

Associated with the waterfall is the nearby Linganmakki Dam across river Sharavathi. The power station has been operational since 1948, and is of 120 MW capacity, one of the largest hydroelectric stations in India at that time and a small source of electric power for Karnataka now. 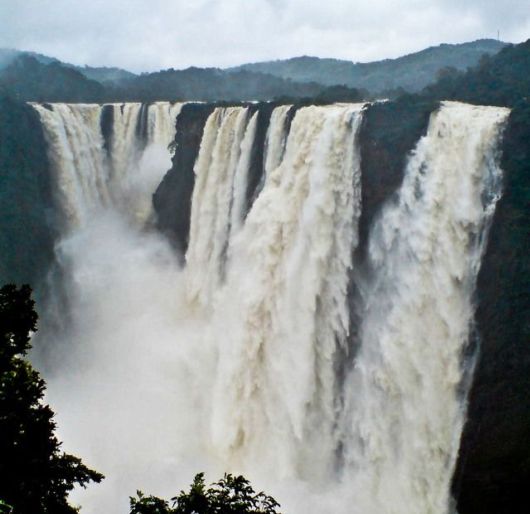 5. Khandadhar Falls, Orissa
Located 54 km away from the town of Keonjhar (180 km north of Bhubaneshwar) the Khandadhar falls at a height of 152 metres. The water seems to have a smoke-like appearance probably due to the fact that it violently sprays water while gushing down the steep rock face. 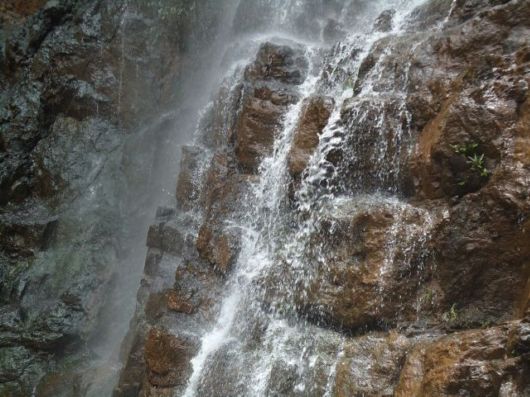 6. Athirappilly Falls, Kerala
Nicknamed the "Niagara Falls of India", it originates from the 145 km long Chalakudy River in the Anamudi mountains of the Western Ghats and flows through the Vazhachal Forest toward the Arabian Sea. The river initially runs smoothly but becomes more turbulent as it nears Athirappilly. At Athirappilly Falls, the water surges around big rocks and cascades down in three separate plumes. 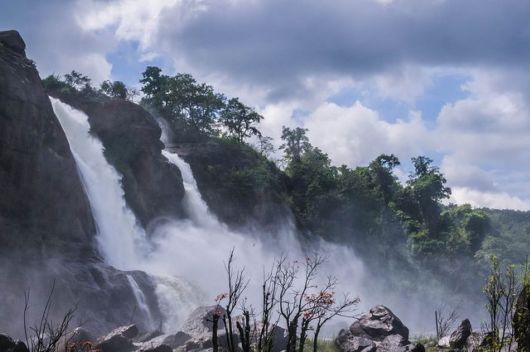 7. Hundru Falls, Jharkhand
Other than being famed for a mental asylum, Ranchi has a beautiful waterfall 45 km away at a height of 98 metres on the course of the Subarnarekha river. The Hundru Falls is one of the several scarp falls in the region. During rainy season it takes a formidable form but in the dry season it turns into an exciting picnic spot. At the base of the Hundru Falls, there is a pool, which serves as a bathing place. 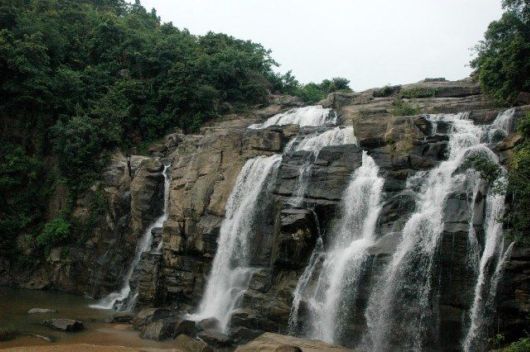 8. Courtallam Falls, Tamil Nadu
The Courtallam area has scenic surroundings with a Shiva temple (Thirukutralanathar) standing in front of the waterfall. Peraruvi (main falls), the biggest falls in Courtallam, is about 60m high. The flow of water is interrupted by the Pongumakadal, a 19m deep crater and comes down with greatly reduced impact, making a bath safe.

The closest towns to Courtallam are Sengottai and Tenkasi at 5 kms respectively. The closest airport is Tuticorin Airport approximately 90 kms away and the nearest railway station is Tenkasi, 5 kms away. 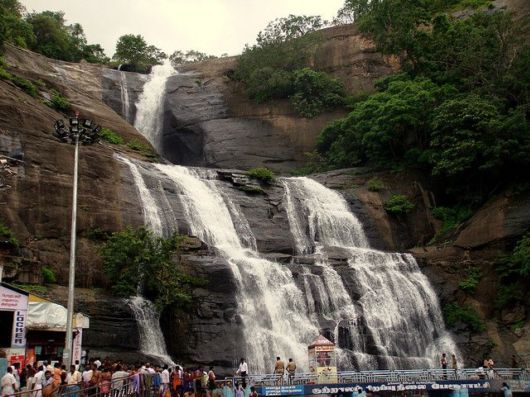 9. Thalaiyar Falls, Tamil Nadu
Better known as Rat Tail Falls due to the steady straight stream of water that crashes down at a height of 297 metres. The very edge at the top of the falls has a low concrete wall on either side concentrating the flow of water to focus the falls into a tapering shape. You can walk along the wall and get near the center of the falls. You can watch the water in freefall, mostly silent. The noise of the crashing water below doesn’t rise up.

It is possible to hike to the bottom of the falls in the dry season, starting from the Manjalar Dam. This difficult hike proceeds along a path through mango orchards and potato fields around the Manjalar Reservoir and up along the stream as far as a small shrine. The return hike is more difficult. The full hike there and back covers about 15 km and can take up to a full day. 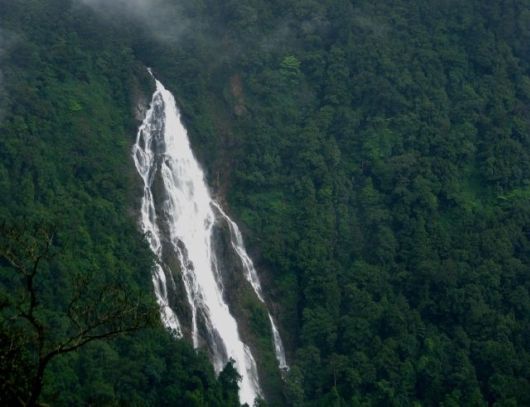 10. Chitrakoot Falls, Chhattisgarh
The free drop of the falls is a sheer height of about 30 metres. It is located at a distance of 38 km to the west of Jagadalpur. Due to its horseshoe shape, it is compared with the Niagara Falls. During the rainy season, from July and October, rainbows are created with sun rays reflecting on mist from the waterfall.

On the left bank of the Chitakoot Falls, a small Hindu shrine dedicated to Shiva and several naturally created grottos named "Parvati caves" are located. The weather in the area is generally pleasant except in the summer season. Below the falls, the river passes through the Bodhghat forested area and the river regime undergoes drastic change in its flow conditions. 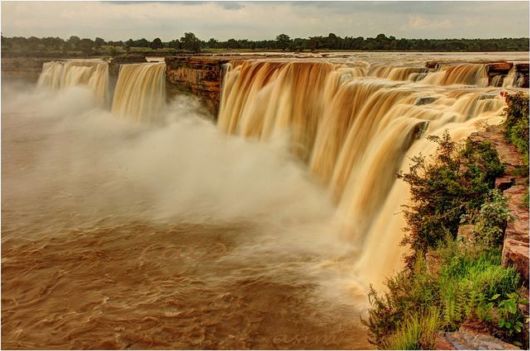 It has an average width of 305 meters, a height of 98 m, and an average volume of 934 cubic meters/sec. It is a perennial waterfall and the best time to visit is the monsoon season from July to October.

There are two ways to reach Shivanasamudra from Bengaluru. You can drive along the Bengaluru-Mysore highway till Maddur. Immediately after Maddur bus station, take a left towards Malavalli. This route is about 135 kilometers and takes three hours from the city without stopping. 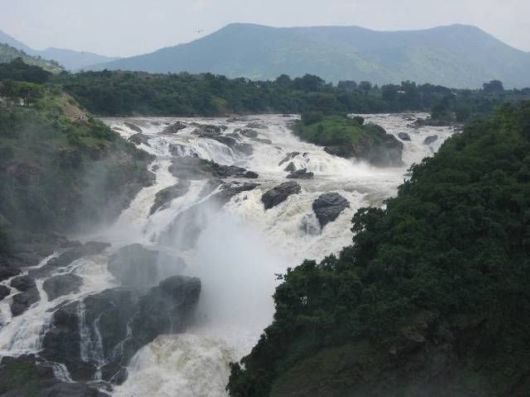 12. Ethipothala Falls, Andhra Pradesh
Ethipothala Falls is 21 metres high and is situated on the Chandravanka river, a tributary of the River Krishna. The waterfall is a combination of three streams and is about 11 km away from Nagarjuna Sagar Dam.

There are also the Ranganatha and Dattatreya temples nearby which draw several devotees. 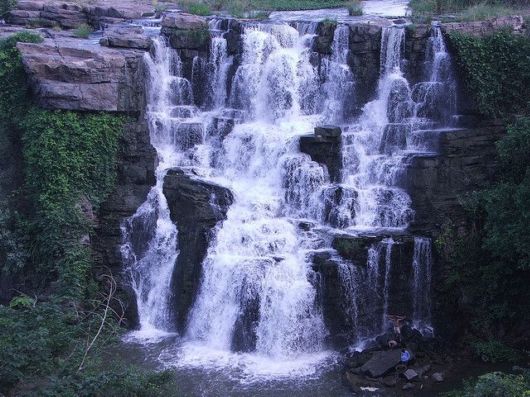 13. Barkana Falls, Karnataka
Barkana waterfalls was once restricted to the forest department as there was Naxal activity in that area. Barkana is one of the top ten highest waterfalls in India, 850 feet in height. Barkana Falls is a product of the Seeta river which is also the source of a hydro electricity project. Visiting Barkana during the rainy season is risky as leeches are in abundance here and the trekking route gets slippery.

Off-road bikes can also be used to reach the waterfalls. Barkana waterfalls is 7 km from the village of Agumbe. 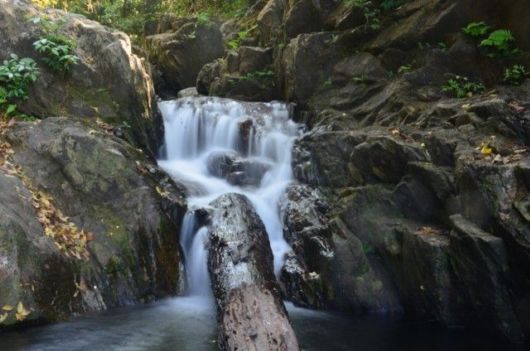 14. Elephant Falls, Meghalaya
Elephant Falls was the British name of what the local Khasi people once referred to as Ka Kshaid Lai Pateng Khohsiew (or "Three Steps Waterfalls") since the falls actually consisted of three sections one after the other. The British renamed it because of a rock resembling an elephant near the left side of the main falls which was destroyed in an earthquake in 1897.

It is situated 12 km outside Shillong, and the mountain stream descends through two successive falls set in dells of fern-covered rocks. 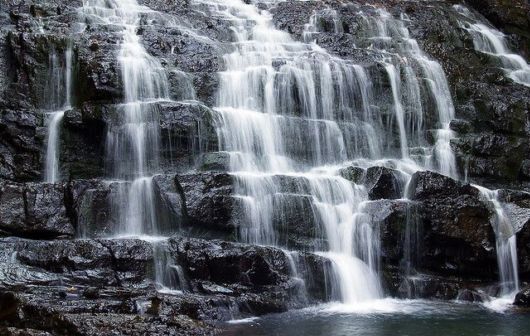 15. Nohkalikai Falls, Meghalaya
Located near Cherrapunji, the wettest place on Earth, this hauntingly beautiful waterfall, cascading down from the top of the gorge to the mystic deep green pool below, reminds one of the tragic legend associated with it. A grief stricken mother plunged to her death, unable to overcome her sorrow over the murder of her daughter by her husband.

It is the tallest plunge waterfall in India at a height of 1115 feet (340 metres). Nohkalikai Falls are fed by the rainwater collected on the summit of a comparatively small plateau and decrease in power during the dry season in December-February. Below the falls is a plunge pool with unusual green colored water. 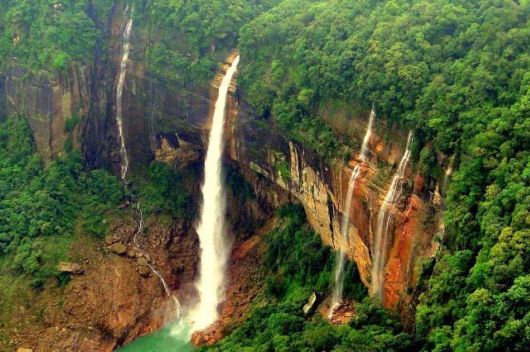 16. Dhuandhar Falls, Madhya Pradesh
The Dhuandhar Falls are located on Narmada River in Bhedaghat at a height of 10 metres. The plunge, which creates a bouncing mass of mist, is so powerful that its roar is heard from a far distance. The Marble Rock formations located just 1 km from the falls, is also worth seeing. 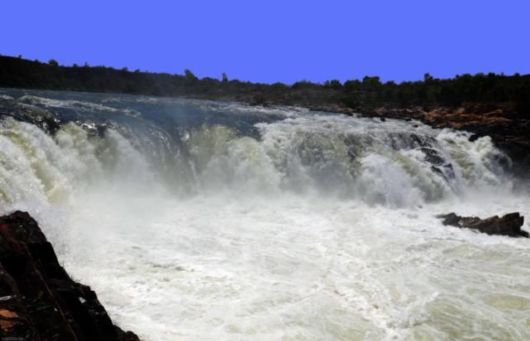 17. Barehipani Falls, Orissa
Barehipani is India’s second highest and Orissa’s highest waterfall. The height of the waterfall is 1309 ft. The source of the waterfall is the Budhabalanga River that flows over the mountain. It is a two-tier waterfall, which means the water falls in two sections. The best time to visit is between October and June.

The forest lodge situated on the opposite bank is a wonderful place for viewing wildlife. There are elephants, tigers, gaurs, deer and a great variety of birds. 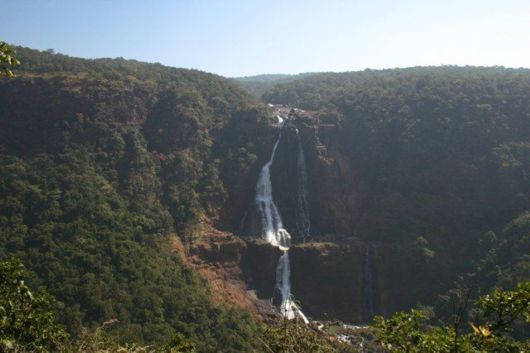 18. Bear Shola Falls, Tamil Nadu
Bear Shola Falls is a soaring waterfall in a reserve forest. It is the perfect picnic spot in Kodaikanal and is just within 2 km of the lake, where bears once came to drink water. The final draw nearby is a soothingly climbing foot-path. Ideal to visit during the rainy season, the approach path to the falls is a craggy hill path and hence appropriate means of transport are essential to reach the falls.The Shola forest all around is meant to be appreciated by wildlife enthusiasts and there is a concrete track for short treks into the deeper backwoods. 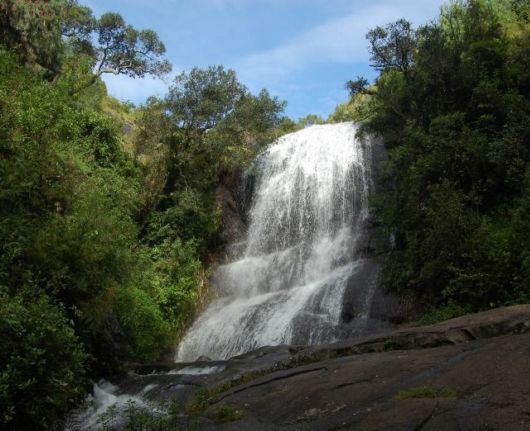 19. Thoseghar Falls, Maharashtra
It is a scenic spot located near the small village of Thoseghar, which is 20 km from Satara, at the edge of the Konkan region. There are a series of waterfalls, some of them 15 to 20 metres and one which is 500 metres in height. People come from all over Maharashtra to visit the area, especially during the rainy or monsoon season (July to November). The immediate area is calm and quiet, with a clean lake and dark woods in a hilly area. A newly constructed platform which gives a good view of the waterfall has been built, but it is not safe when it is raining heavily. 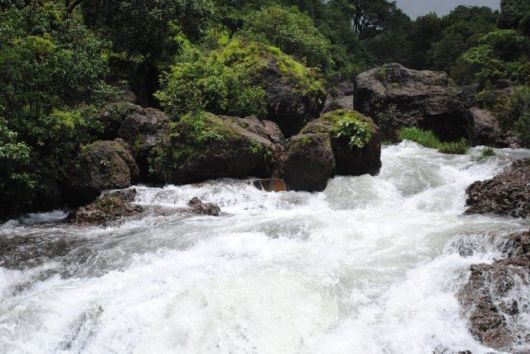