Road trips done on Scenic Roads are exciting, fun and memorable and a great way to experience a country. From coastal highways and dizzying mountain passes, we have compiled a list of some of the most beautiful, challenging and unforgettable roads in the world. 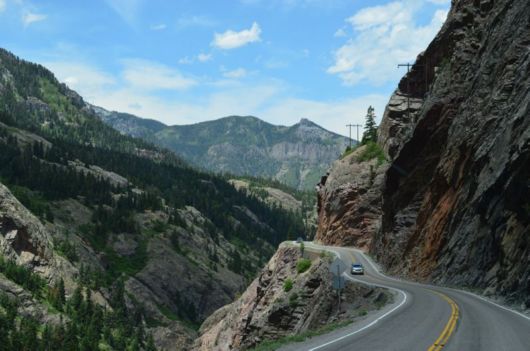 U.S. Route 550 is a spur of U.S. Highway 50 that runs from Bernalillo, New Mexico to Montrose, Colorado in the western United States. The section from Silverton to Ouray is frequently called the Million Dollar Highway. This stretch through the gorge is challenging and potentially hazardous to drive; it is characterized by steep cliffs, narrow lanes, and a lack of guardrails; the ascent of Red Mountain Pass is marked with a number of hairpin curves used to gain elevation, and again, narrow lanes for traffic?many cut directly into the sides of mountains. 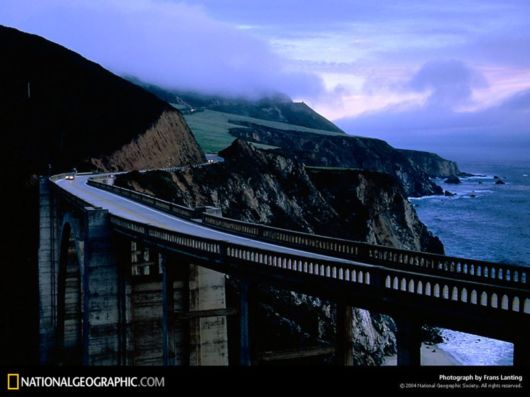 State Route 1 (SR 1) is a major north-south state highway that runs along most of the Pacific coastline of the U.S. state of California. The highway is famous for running along some of the most beautiful coastlines in the USA, leading to its designation as an All-American Road.

Highway 1 enters the Big Sur region crossing the San Carpoforo Creek just south of the Monterey County line. For about 90 miles (140 km) from the San Carpoforo Creek to the Carmel River, the road winds and hugs the cliffs of Big Sur, passing various coastal parks in the area. The road also briefly leaves the coast for a few miles and goes through a redwood forest in the Big Sur River valley. This segment of the highway, built between 1919 and 1937, also crosses several historic bridges, including the scenic Bixby Creek Bridge shown above. 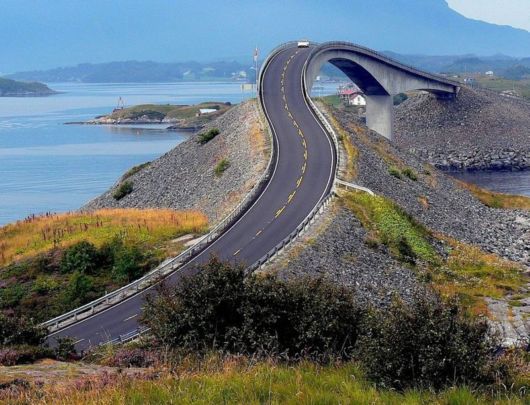 Opened on July 7, 1989, the Atlantic Road is a National Tourist Route and was honoured as Norway?s Construction of the Century in 2005. The Atlantic is an 8.3 kilometer (5.2 miles) section of Country Road 64 which runs between the towns of Kristiansund and Molde, the two main population centres in the county of More og Romsdal in Fjord, Norway.

The road is built on several small islands and skerries, which are connected by several causeways, viaducts and eight bridges. For more information check out this featured post on the Sifter. 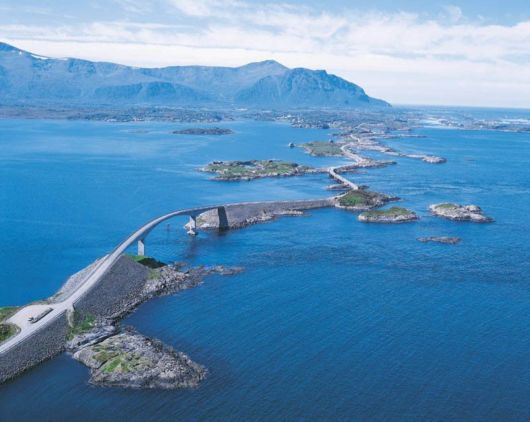 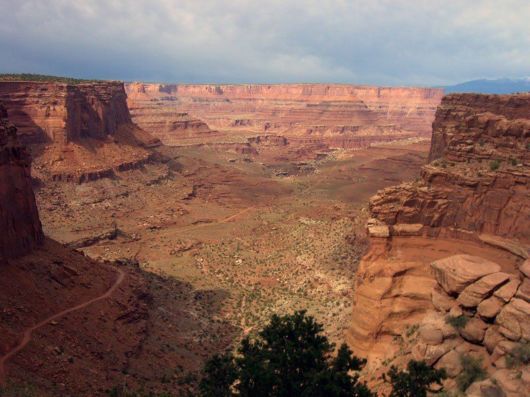 The 100-mile White Rim Road loops around and below the Island mesa top and provides expansive views of the surrounding area. Trips usually take two to three days by four-wheel-drive vehicle or three to four days by mountain bike. All vehicles and bikes must remain on roads. ATVs and non-street legal dirt bikes are not permitted. Pets are also not permitted, even in vehicles. 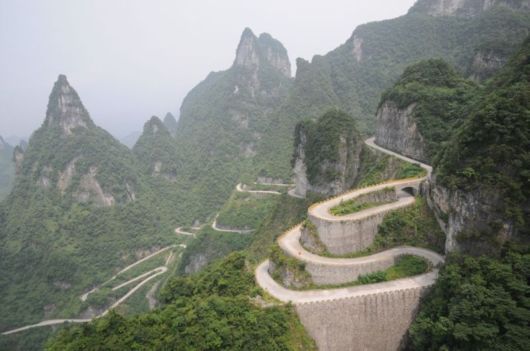 Tianmen Mountain is a mountain located within Tianmen Mountain National Park, Zhangjiajie, in northwestern Hunan Province, China. A cable car operates from nearby Zhangjiajie railway station to the top of the mountain. It features 98 cars and a total length of 7,455 meters and an ascent of 1,279 meters.

The highest gradient is an unusual 37 degrees. There is also an 11 km road with 99 bends that reaches the top of the mountain and takes visitors to Tianmen cave, a natural hole in the mountain at a height of 131.5 meters. 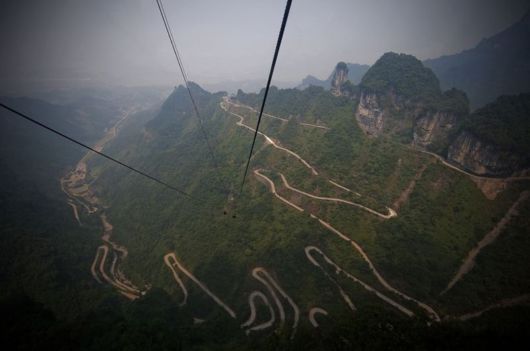 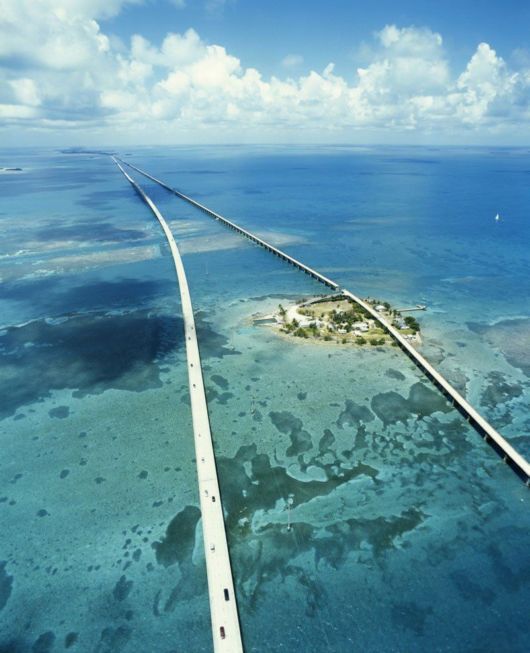 The Seven Mile Bridge is a famous bridge in the Florida Keys, in Monroe County, Florida, United States. It connects Knight?s Key (part of the city of Marathon, Florida) in the Middle Keys to Little Duck Key in the Lower Keys.

Among the longest bridges in existence when it was built, it is one of the many bridges on US 1 in the Keys, where the road is called the Overseas Highway. 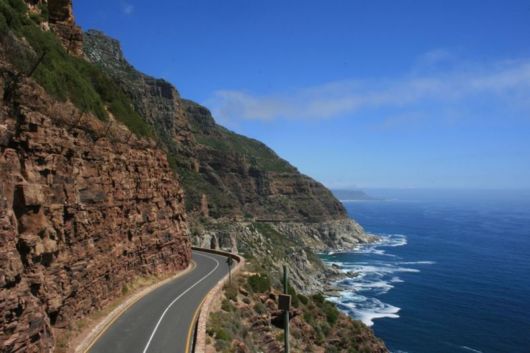 Chapman?s Peak Drive winds it way between Noordhoek and Hout Bay on the Atlantic Coast of the south-western tip of South Africa. The 9km route, with its 114 curves, skirts the rocky coastline of Chapman?s Peak (593m).

The drive is affectionately known as ?Chappies? and offers stunning 180° views with many areas along the route where you can stop and take in the exquisite scenery. 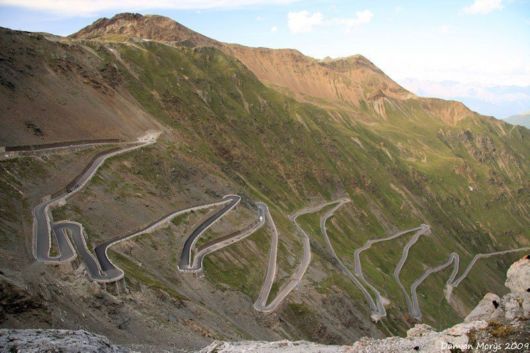 The Stelvio Pass, located in Italy, at 2757 m (9045 feet) is the highest paved mountain pass in the Eastern Alps, and the second highest in the Alps, slightly below the Col de l?Iseran (2770 m, 9088 feet). Stelvio was also picked by the British automotive show Top Gear as its choice for the ?greatest driving road in the world?, although their search was concentrated only in Europe.

This conclusion was reached after the team went in search of a road that would satisfy every ?petrolhead?s? driving fantasies in the premiere of the show?s 10th season. Top Gear later decided that the Transfagarasan Highway in Romania was possibly a superior driving road. 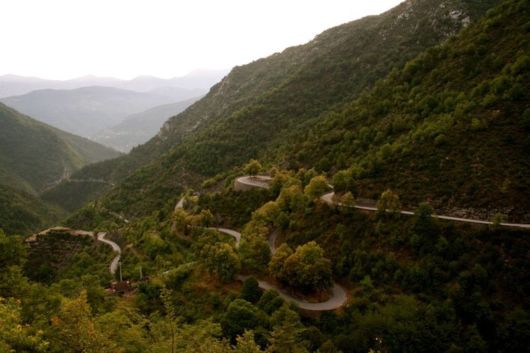 The Col de Turini (el. 1607 m) is a high mountain pass in the Alps in the department of Alpes-Maritimes in France. It lies near Sospel, between the communes of Moulinet and La Bollène-Vésubie in the Arrondissement of Nice. It is famous for a stage of the Monte Carlo Rally which is held on the tight road with its many hairpin turns. 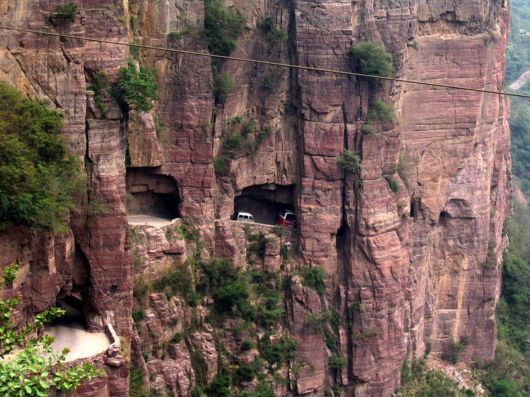 The Guoliang Tunnel is carved along the side of and through a mountain in China. The tunnel is located in the Taihang Mountains which are situated in the Henan Province of China. If you want to get there, you should start your trip in Xinxiang. Leave the city by driving north on Huanyu Avenue (the S229). After 13 miles you?ll enter the town of Huixian.

Stay on the S229 for 15 miles more until you reach the junction with the S228. Turn left here and keep following the S229. After 8 miles you reach the village of Nanzhaizen. Turn left again and follow directions to Guoliang, 8 miles further. 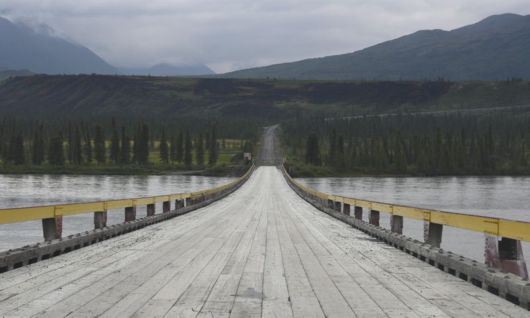 Denali Highway (Alaska Route 8) is a lightly traveled, mostly gravel highway in the U.S. state of Alaska. It leads from Paxson on the Richardson Highway to Cantwell on the Parks Highway. Opened in 1957, it was the first road access to Denali National Park (then known as Mount McKinley National Park). The Denali is 135 miles (217 km) in length. 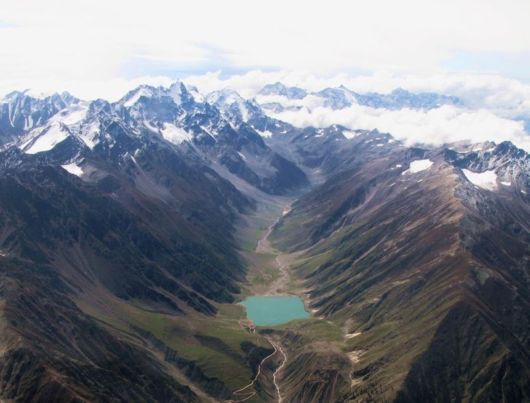 The Karakoram Highway (KKH) is the highest paved international road in the world. It connects China and Pakistan across the Karakoram mountain range, through the Khunjerab Pass, at an elevation of 4,693 m/15,397 ft. It connects China?s Xinjiang region with Pakistan?s Gilgit?Baltistan and Khyber Pakhtunkhwa regions and also serves as a popular tourist attraction.

Due to its high elevation and the difficult conditions in which it was constructed, it is also referred to as the ?Eighth Wonder of the World.? The Karakorum Highway is known informally as the KKH, and ? within Pakistan ? officially as the N-35; within China, officially as China National Highway 314 (G314).

The Great Ocean Road is an Australian National Heritage listed 243-kilometre (151 mi) stretch of road along the south-eastern coast of Australia between the Victorian cities of Torquay and Warrnambool. The road was built by returned soldiers between 1919 and 1932, and is the world?s largest war memorial; dedicated to casualties of World War I.

It is an important tourist attraction in the region, which winds through varying terrain alongside the coast, and provides access to several prominent landmarks; including the nationally significant Twelve Apostles limestone stack formations.

Sani Pass is located in the western end of KwaZulu-Natal province of South Africa on the road between Underberg and Mokhotlong, Lesotho. Sani Pass is a notoriously dangerous road that requires the use of a 4×4 vehicle. The pass is approximately 9 km in length and requires above average driving experience.

While South African immigration at the bottom of the pass prohibits vehicles deemed unsuitable for the journey, the Lesotho border agents at the top generally allow vehicles of all types to attempt the descent. Border between the two countries closes at 4:00 pm every day and the Pass is often closed due to weather conditions, especially during winter. 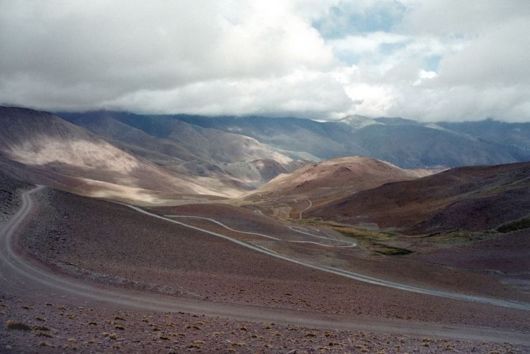 National Route 40 or RN40 (often called Ruta 40), is a route in western Argentina, stretching from Cabo Virgenes in Santa Cruz Province in the south to La Quiaca in Jujuy Province in the north, running parallel to the Andes mountains. The southern part of the route, a largely paved road through sparsely populated territory, has become a well-known adventure tourism journey. 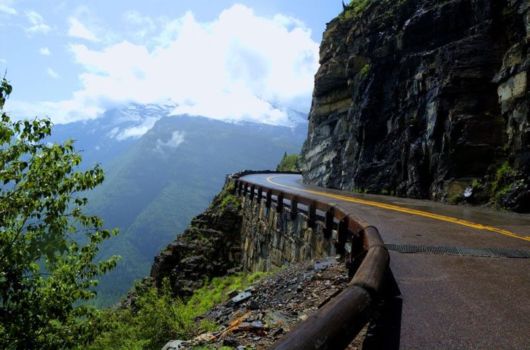 Going-to-the-Sun Road was completed in 1932 and is a spectacular 50 mile, paved two-lane highway that bisects Glacier National Park east and west. It spans the width of the Park, crossing the Continental Divide at 6,646-foot-high Logan Pass. It passes through almost every type of terrain in the park, from large glacial lakes and cedar forests in the lower valleys to windswept alpine tundra atop the pass. Scenic viewpoints and pullouts line the road.

In 1983 Going-To-The-Sun Road was included in the National Register of Historic Places and in 1985 was made a National Historic Civil Engineering Landmark. 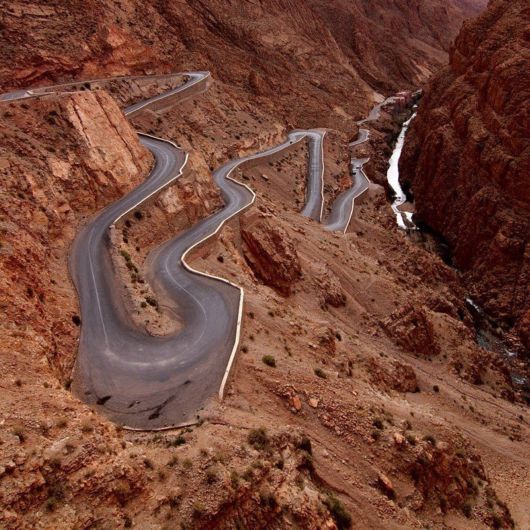 Carved over the centuries by the Dades River, the Dades Gorge is now a very popular destination for travellers in Morocco. Travellers in 4WD (with a guide) can follow a mountain loop (at certain times of the year), following Dades Gorge as far north as Agoudal, then turning south to head for Todra Gorge. It can be accessed from the small town of Boumaine which lies 116 km northeast of Ouarzazate and 53 km from Tinerhir.

A sealed road runs for 63 km through the Gorge as far as Msemrir, after that 4WD is necessary. The best time to visit the lower valleys is from March to May and the mountains are best from May to July. 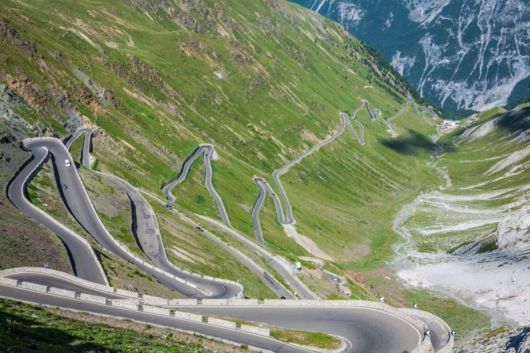 Furka Pass (el. 2429 m.) is a high mountain pass in the Swiss Alps connecting Gletsch, Valais with Realp, Uri. The Furka Pass was used as a location in the James Bond film Goldfinger. 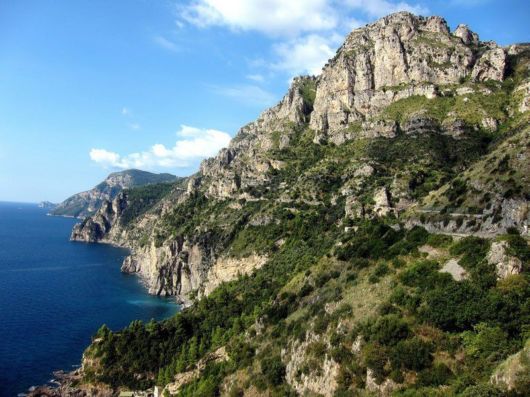 The Amalfi Coast is widely considered Italy?s most scenic stretch of coastline, a landscape of towering bluffs, pastel-hued villages terraced into hillsides, corniche roads, luxuriant gardens, and expansive vistas over turquoise waters and green-swathed mountains. Deemed by UNESCO ?an outstanding example of a Mediterranean landscape,? the coast was awarded a coveted spot on the World Heritage list in 1997.

The Amalfi Coast lies along the southern flanks of the Sorrento Peninsula, a cliff-edged promontory that wanders out from the mainland at the southern end of the Bay of Naples. 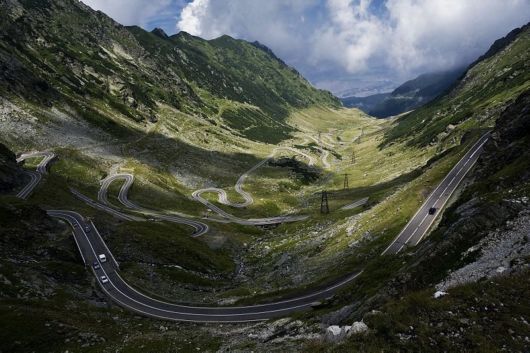 The Transfagaraan or DN7C is the second-highest paved road in Romania. Built as a strategic military route, the 90 km of twists and turns run north to south across the tallest sections of the Southern Carpathians, between the highest peak in the country, Moldoveanu, and the second highest, Negoiu. The road connects the historic regions of Transylvania and Wallachia, and the cities of Sibiu and Piteti.

The road climbs to 2,034 metres altitude. The most spectacular route is from the North. It is a winding road, dotted with steep hairpin turns, long S-curves, and sharp descents. Top Gear host, Jeremy Clarkson, had said about Transfagaraan that, ?this is the best road? in the world? ? a title the program?s presenters had previously given to the Stelvio Pass in Italy.