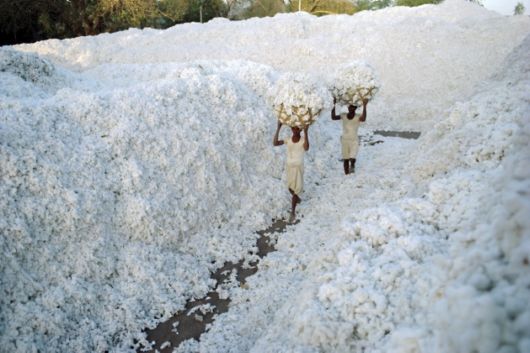 The nation?s largest producer of cotton and salt, Gujarat is the birthplace of Mahatma Gandhi. In 2005 and 2006 heavy monsoons caused severe flooding, killing more than 1,000 people and devastating both infrastructure and agriculture. Climate change is expected to lead to increasingly unpredictable monsoon rains and floods. 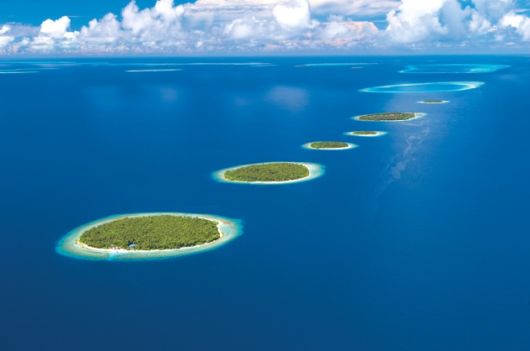 Famous for its 1,200 tropical islands, snow-white beaches, swaying palm trees, and richly colored coral reefs, the Republic of Maldives stretches across more than 600 miles. With 80 percent of the country less than 3.3 feet above sea level, rising ocean levels and a potential increase in the intensity of tropical storms pose a serious threat. 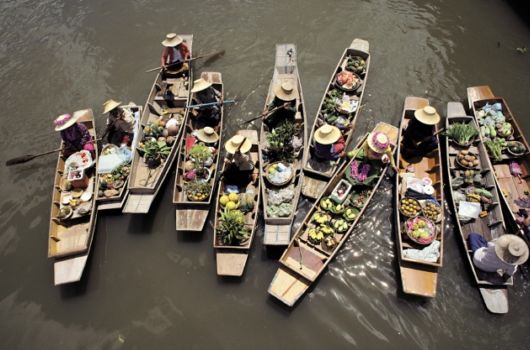 Bangkok is a tropical metropolis where the traditional East meets the modernity of the West. But geography exposes it to flooding, especially during the monsoon season. The city is already sinking due to its soft underground, heavy urbanization, and excessive pumping of groundwater. Much of Bangkok could be underwater before the end of the century. 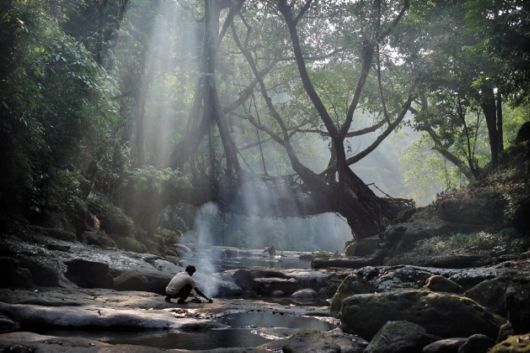 Shrouded in clouds and surrounded by waterfalls, Cherrapunji is one of the wettest places on Earth. Paradoxically, its residents face water shortages, since there is generally no rain for nearly eight months of the year. Rainfall has decreased over the last century, and erosion from deforestation limits the ground?s capacity to store rainwater. 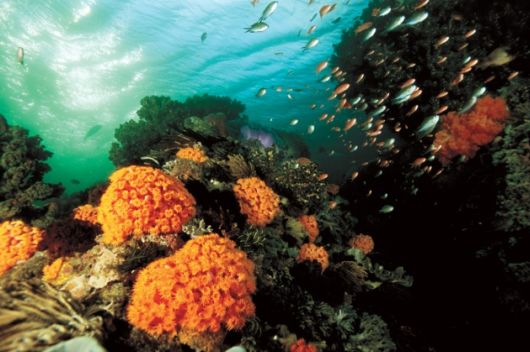 The sea surrounding Komodo provides some of the world?s best diving, thanks to its spectacular fish and coral reefs. The island is also home to Komodo dragons, lizards that grow up to 10 feet long. Rising sea levels threaten to flood its mangrove forests and beaches, while increased acidification and rising surface temperatures may eventually kill the coral. 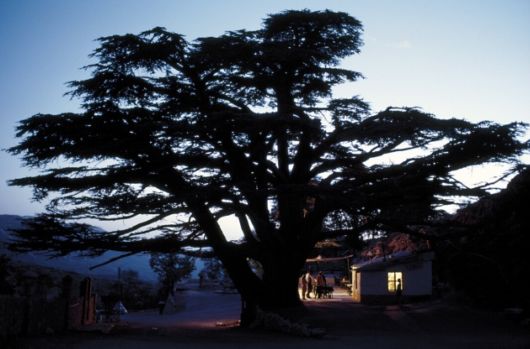 At one time the plains and mountains of Lebanon were densely covered with majestic cedar trees. Today, the remains of the immense forests are found on the high slopes of Mount al-Makmal in northern Lebanon. The last ancient cedars face a severe threat from rising temperatures and decreases in precipitation, which could leave Makmal?s slopes barren. 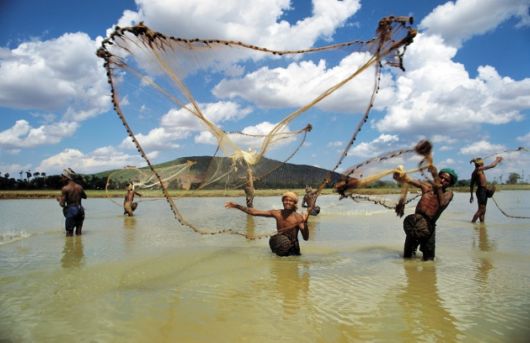 Nutrients from the two great rivers of Ganges and Brahmaputra feed the soil of the paddies in the low-lying Ganges Delta. Some 300 million people depend on the crops produced here. The delta spreads over a massive 65,000 square miles. Climate change could increase rainfall and cause more frequent flooding and monsoons. 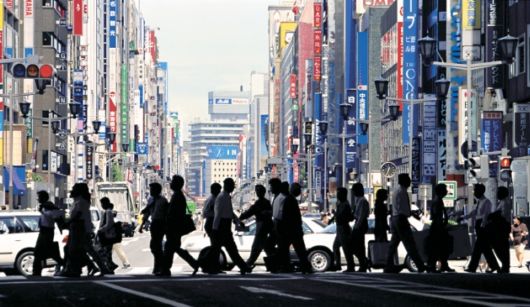 Tokyo is one of the world?s greatest metropolises. But it now suffers from a phenomenon known as ?heat islands,? a characteristic of mega cities in which artificial heat from car exhaust and factory emissions creates a local greenhouse effect. If global temperatures continue to rise, the heat in big cities like Tokyo could increase. 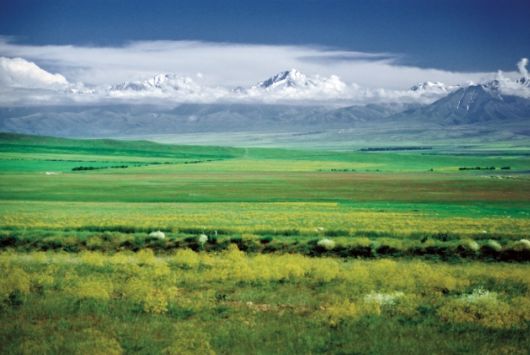 Farmers and cattle breeders at the foot of the Tian Shan mountain range have been dependent on meltwater from Central Asian glaciers for 3,000 years. But in the past 50 years, the glaciers have lost about 36 percent of their mass. With temperatures projected to increase, water may be limited at a time when demand is growing quickly.

Today the red-crowned crane is the second-rarest crane species in the world. There are about 1,200 in Hokkaido, where they breed, stalk the fields, and perform wild courtship dances.Their habitat is shrinking as massive developments, deforestation, and rising sea levels threaten the Kushiro marshland. 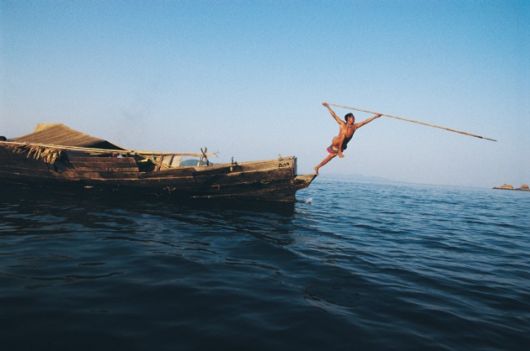 Blue waters and white coral reefs are home to some of the last surviving nomadic sea hunters and gatherers in the world. Their very existence is now endangered by changes in ocean movement and rising sea temperatures, which also threaten the entire reef ecosystem. 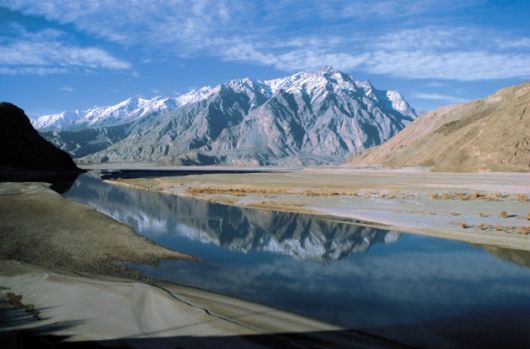 Fed by glaciers on the Himalayan mountains, the Indus runs for 1,900 miles, nourishing temperate forests, plains, and countryside. The melting of the Tibetan glaciers and an increasingly irregular precipitation pattern could create more intense water shortages. 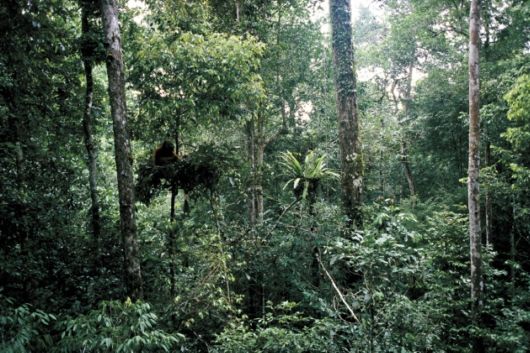 Many of the world?s remaining wild orangutans live in the rainforests of Borneo. But these rainforests are being stripped of trees as a result of logging, road construction, and palm-oil plantations. Now rising temperatures are reducing the abundance of fruit and increasing the incidence of malaria and the risk of forest fires. 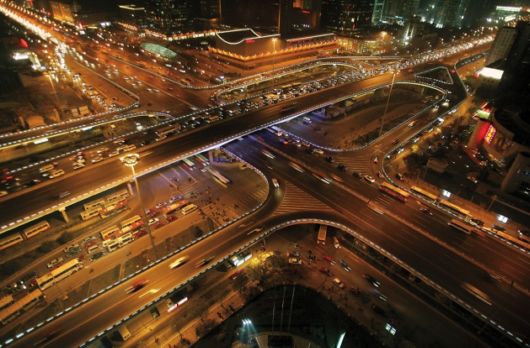 Beijing is China?s capital and, with its huge multilane highways, is a major transportation hub. But the desert is encroaching on this metropolis. Beijing is plagued by sandstorms howling in from Inner Mongolia?one storm dumped almost 364,000 tons of sand and dirt on the city in 2005. Rising temperatures combined with less predictable rain patterns are likely to reduce water supplies and augment desertification. 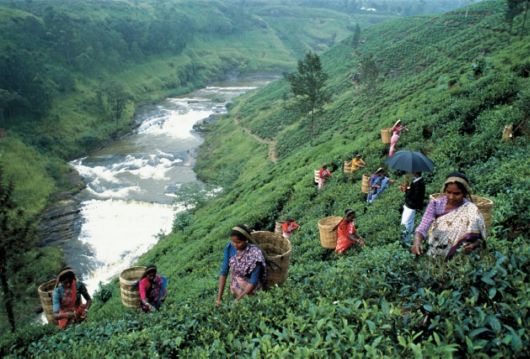 The hillsides here are perfectly suited for growing tea, which requires an even distribution of rainfall throughout the year, moderate temperatures, and a sunny climate. Yet increasing temperatures and drier weather are likely to create droughts that will reduce the yield and damage many of the plants. Heavier rainfall could also cause soil erosion and landslides. 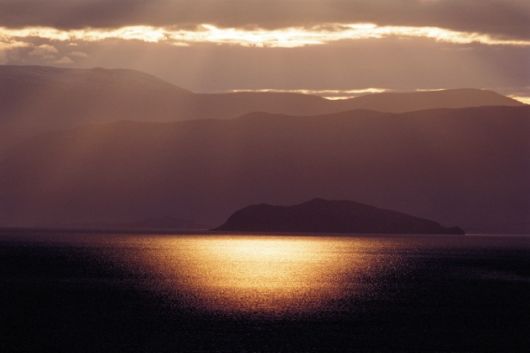 Lake Baikal in southern Siberia is the world?s oldest and deepest lake, containing more water than all of North America?s Great Lakes combined. The lake?s biodiversity has adapted to cold, long winters, but its waters have been warming over the last several decades. If temperatures continue to rise as projected, the entire ecosystem could suffer. 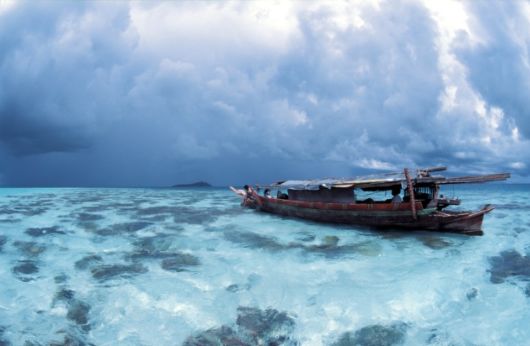 Historically, the Bajau people have lived a nomadic seafaring life in this tropical monsoon climate. But traditional life is growing increasingly complicated. Overfishing and other illegal tactics such as blasting and poison-fishing are damaging the coral reefs. Rising sea-surface temperatures and increasing acidification only exacerbate this problem. 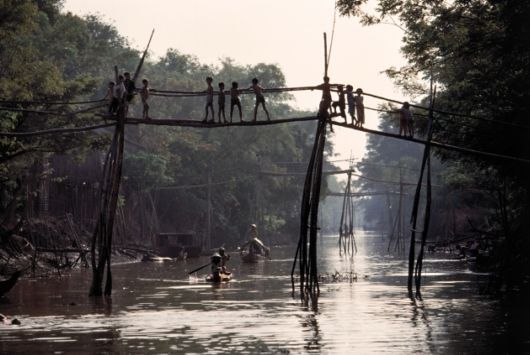 A lush area of vast plantations and one of Vietnam?s largest rice-, vegetable-, and fruit-producing regions, the delta is threatened by upstream dams and pollution. The projected rise in sea level could increase saltwater intrusion into freshwater ponds and rice fields. It could also cause flooding, leading to a loss of cropland and mangroves. 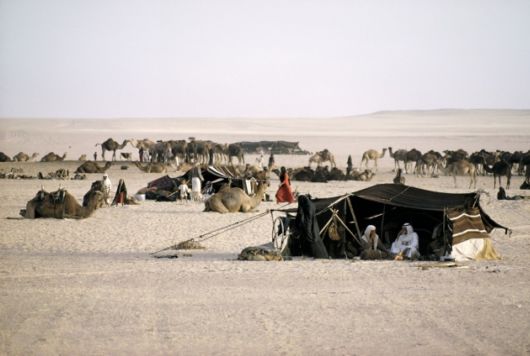 The Empty Quarter is the largest continuous sand sea in the world. For centuries, Bedouin communities have survived in this vast wilderness. The vegetation?scattered herbs, shrubs, and weeds?feeds the Bedouins? livestock, and this sensitive ecosystem is particularly vulnerable to increasing temperatures. 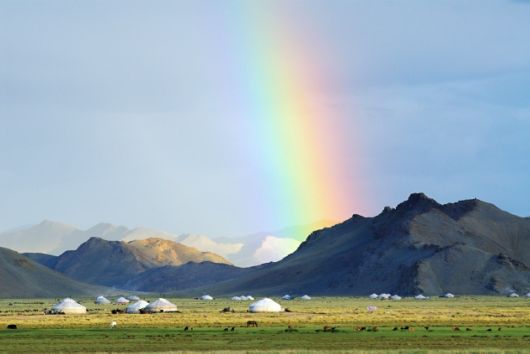 Today, half of the nearly 3 million Mongolians still live as herdsmen. They lead a pastoral way of life, moving around in search of pastures for their livestock and sites for their gers, round, moveable dwellings. Rising temperatures and changing rainfall patterns could expand the Gobi desert, threatening the nomadic way of life. 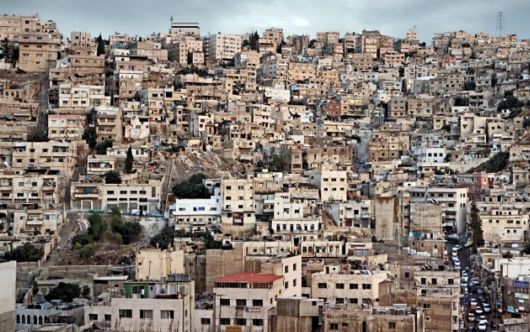 This city of 3 million, perched on hills between the desert and the fertile valley below, draws its drinking and irrigation water from the Jordan River. Yet the river?s flow has decreased in recent decades. Temperature rises and precipitation drops are expected to increase the severity of water shortages, fueling tension in the region. 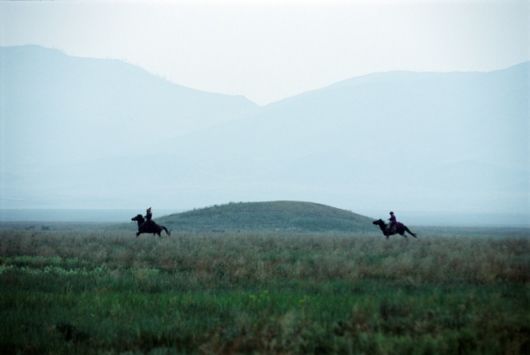 The Russian section of this mountain range is on UNESCO?s World Heritage List because of its diverse plant life, which varies from steppe to mixed forest to alpine vegetation. Temperatures have been rising over the last century and a significant reduction of the permafrost is expected in the coming decades, threatening this unique natural habitat. 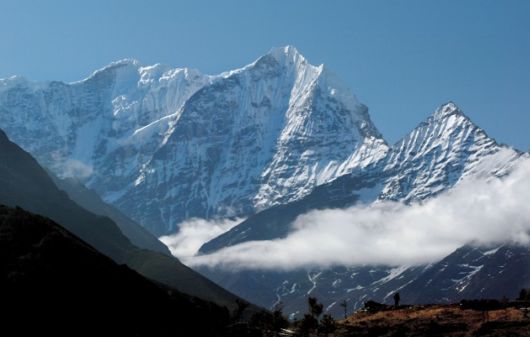 The highest mountain in the world, Mount Everest, is known to the Nepalese as Sagarmatha. This high-altitude landscape of snow and rock is home to the snow leopard, musk deer, and red panda. Two thirds of the Himalayan glaciers have retreated significantly, a trend that could lead to rapid expansion of glacial lakes, causing floods and landslides. 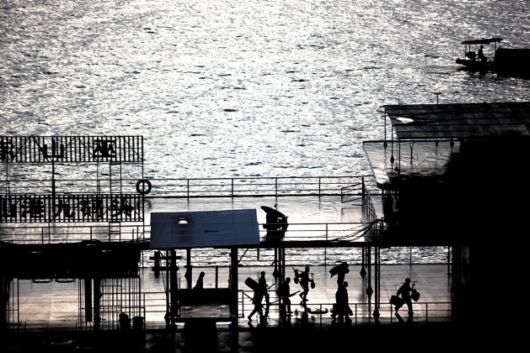 Stretching for 3,900 miles from the Tibetan plateau to the East China Sea, the Yangtze is the longest river in Asia. Due to the diminishing of the Tibetan glaciers, the flow of the once mighty Yangtze could dwindle during the dry season in the future, reducing the availability of fresh water in large parts of China all year round and lowering rice yields. 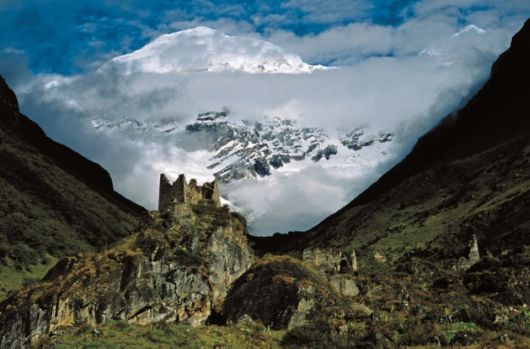 The ruins of Sey Dzong, a 17th-century fortress monastery, lie at the foot of the holy mountain of Chomo Lhari. For centuries, the population has depended on melt water from the glaciers of the high mountains to irrigate their farmland. As melt-off from the glaciers increases, the rapidly increasing flow of water could pose a serious threat.