Moynaq ship Graveyard ? Mo?ynoq also spelled as Muynak and Moynaq, is a city in northern Karakalpakstan in western Uzbekistan. Formerly a sea port, now home to only a few thousand residents at most, Mo?ynoq’s population has been declining precipitously since the 1980s due to the recession of the Aral Sea. 30 years ago Moynaq was one of two biggest Soviet fishing harbours at the Aral Sea. The Aral Sea has been steadily decreasing since the 1960s, as the waters of the two rivers feeding it, the Amu Darya and Syr Darya, were aimed at irrigating agricultural areas. Formerly one of the four largest lakes in the world with an area of 68,000 km2 or 26,300 sq mi, the Aral Sea has been steadily shrinking since in 1960s after the rivers that fed it were diverted by Soviet irrigation projects. In 2007, it had declined to 10% of its original size, splitting into four lakes ? the North Aral Sea, the eastern and western basins of the once far larger South Aral Sea, and one smaller lake between the North and South Aral Seas.However, in 2009, the southeastern lake had disappeared and the southwestern lake had retreated to a thin strip at the extreme west of the former southern sea. The maximum depth of the North Aral Sea is 42 meter or 138 ft in 2008. 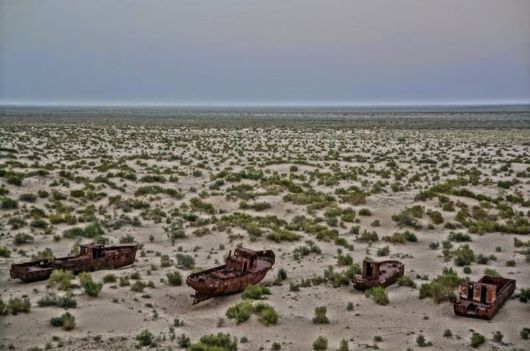 The shrinking of the Aral Sea has been called "one of the planet’s worst environmental disasters". The region’s once-prosperous fishing industry has been essentially destroyed, bringing unemployment and economic hardship. The Aral Sea region is also heavily polluted, with consequent serious public health problems. The retreat of the sea has reportedly also caused local climate change, with summers becoming hotter and drier, and winters colder and longer. 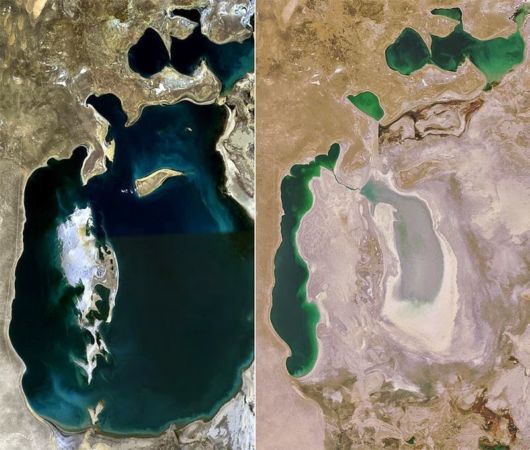 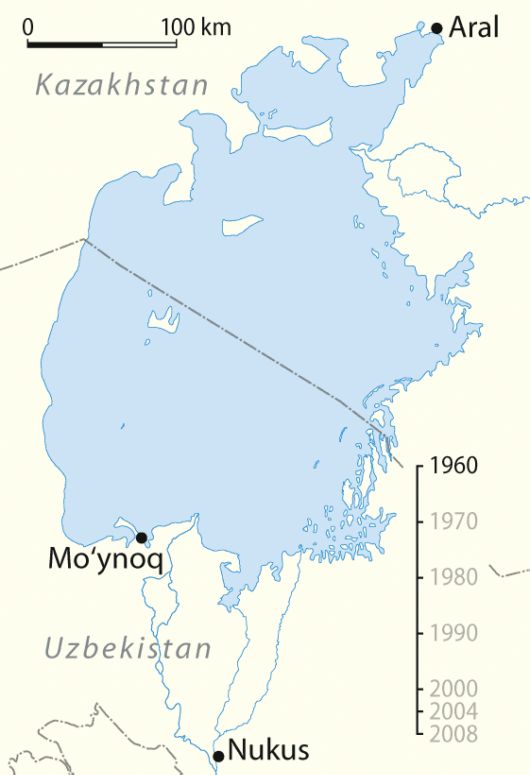 The Aral Sea, Timeline of shrinking 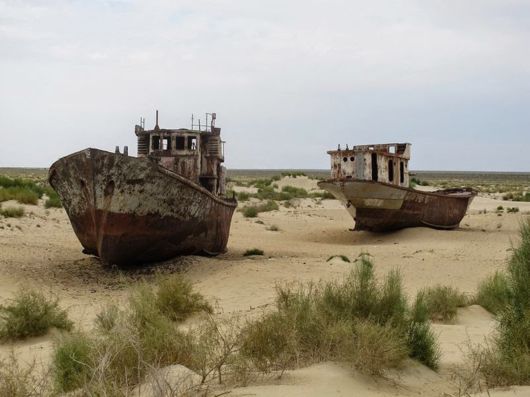 In an ongoing effort in Kazakhstan to save and replenish the North Aral Sea, a dam project was completed in 2005; in 2008, the water level in this lake had risen by 12 m or 39 ft compared to 2003. Salinity has dropped, and fish are again found in sufficient numbers for some fishing to be viable. The Aral Sea watershed encompasses Uzbekistan and parts of Tajikistan, Turkmenistan, Kyrgyzstan and Kazakhstan. 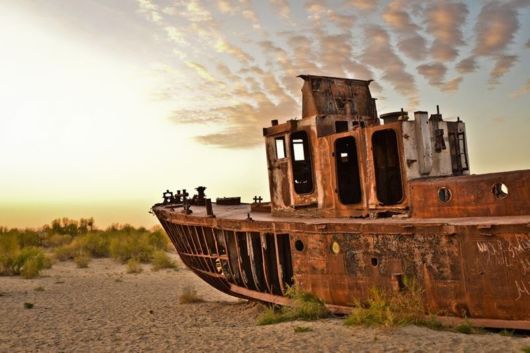 Today Mo?ynoq’s major "tourist attractions" are the armada of rusting hulks that once made up the proud fishing fleet during the Soviet era, and a one-room museum devoted to Mo?ynoq’s heritage as a center of the fishing industry. Poisonous dust storms kicked up by strong winds across the dried and polluted seabed give rise to a multitude of chronic and acute illnesses among the few residents who have chosen to remain, most of them ethnic Karakalpaks, and weather unmoderated by the sea now buffets the town with hotter-than-normal summers and colder-than-normal winters. 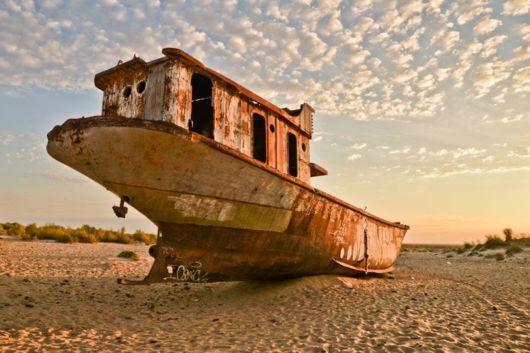 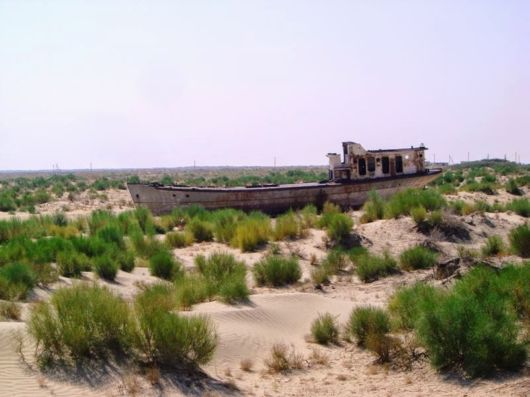 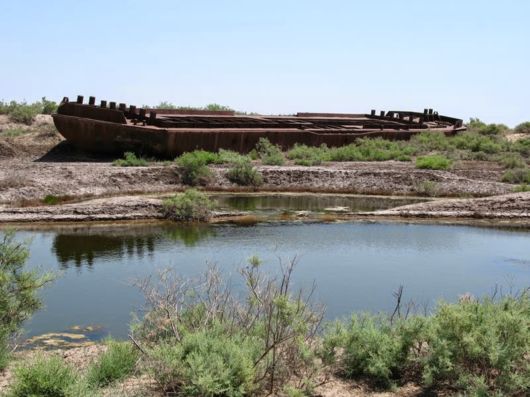 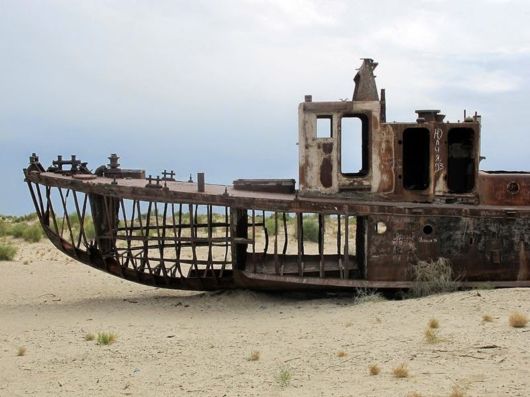 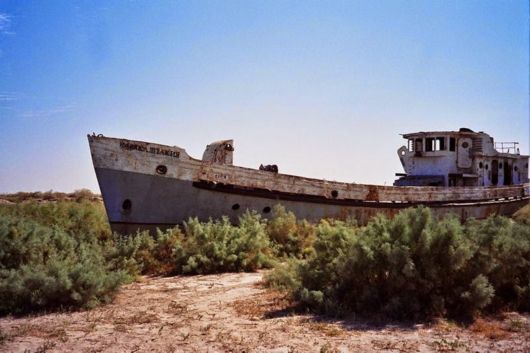 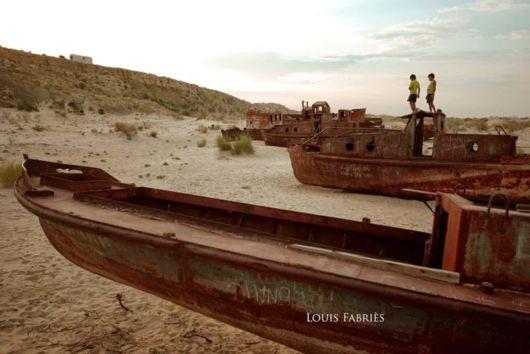 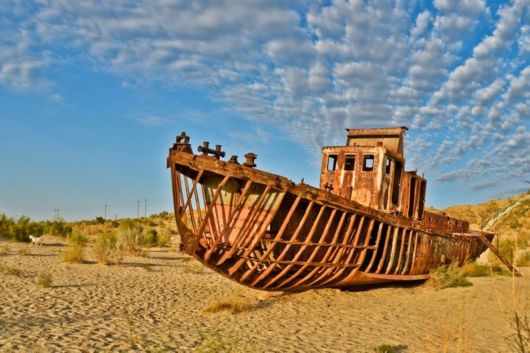 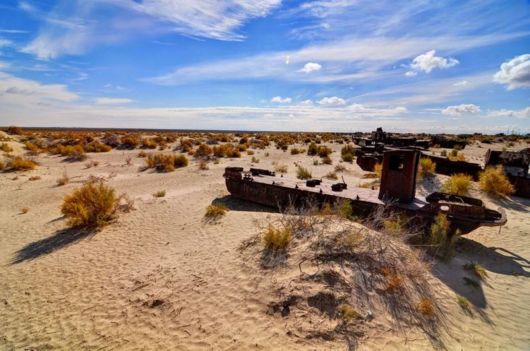 The former fishing port on the Aral Sea. The sea is now over 180 km away. 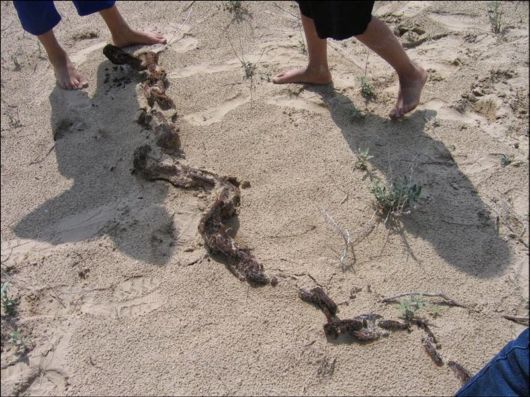 Aral Lake and the Ship Graveyard of Moynaq. 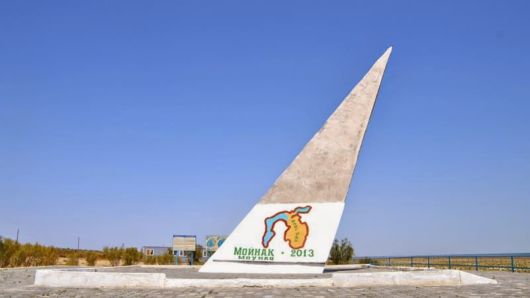 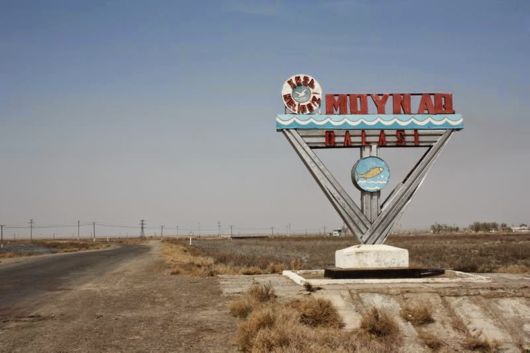