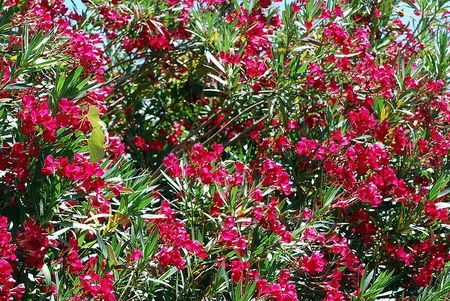 It may look like an attractive flowering shrub, but don’t be fooled! Oleander is one of the most poisonous of all commonly grown garden plants, and though it’s especially toxic to children it is often planted in school yards. It is a hearty bush and grows on many different continents, and with beautiful, fragrant blossoms, it is tempting to include it in any garden… just don’t even think about touching it or tasting the leaves or stems.

A small child can experience symptoms after handling just one leaf from the plant, though typically it takes more contact for severe reactions to take place. Upon consumption, the poison causes intestinal issues like vomiting, diarrhea (sometimes bloody), excess salivation, and cramping/pain. It can also cause a racing, irregular heart rate, poor circulation, tremors, seizures, coma, and death.
In India, there are many cases of people consuming mashed Oleander seeds to attempt suicide. 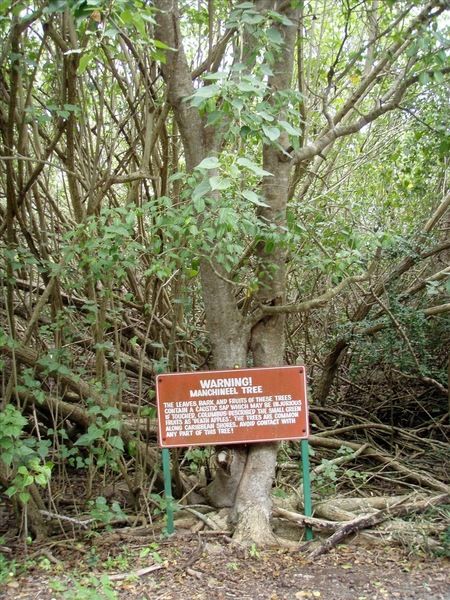 The flowering plants are considered among the most poisonous trees in the world and are native to Florida, the Bahamas, the Caribbean, Central America and northern South America. The Spanish name is "manzanilla de la muerte: which means "little apple of death."

In fact, it’s not just the fruit (which does in fact resemble little apples) that is poisonous, but the entire tree is toxic to humans and animals. The tree oozes a white sap when it rains, so standing beneath the tree can cause blistering of the skin. Burning the tree releases extremely toxic fumes which can cause blindness and respiratory problems when humans come into contact with the smoke. Consumption is generally fatal, and it’s, by all accounts, an agonizing death.

It is common for locals to mark the tree with signs or a red X on the trunk to keep people away. The sign on the tree above reads: "Warning! The leaves, bark, and fruits of these trees contain a caustic sap which may be injurious if touched. Columbus described the small green fruits as ‘death apples.’ The trees are common along the Caribbean shores. Avoid contact with any part of this tree!" 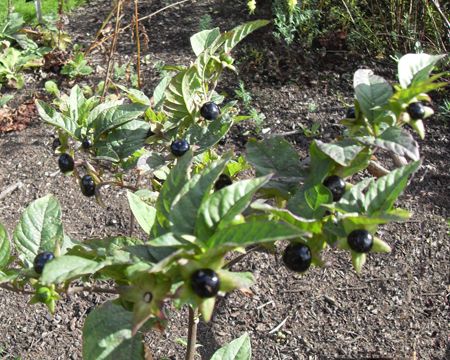 This plant goes by many names, including Belladonna, Devil’s Berries, and Death Cherries. Both the leaves and the berries are extremely toxic, and children have been known to die from eating just two berries.
One of the most toxic plants in the Western Hemisphere, consumption of Deadly Nightshade leads to delirium, hallucinations, dilated pupils, sensitivity to light, blurred vision, tachycardia, loss of balance, staggering, headache, rash, dry mouth and throat, slurred speech, urinary retention, constipation, confusion, hallucinations, delirium, and convulsions.

Without receiving the antidote, sufferers will eventually die due to the plant’s disruption of their body’s involuntary activities such as sweating, breathing, and heart rate. 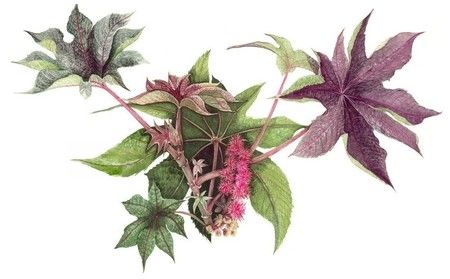 Castor oil has long been used to aid digestion. While it has a foul taste and consistency, it is not harmful when ingested, yet you may be surprised to learn that just one bean from the plant that is used to make castor oil can be fatal to an adult in minutes.

That’s because when they make castor oil they remove a lethal compound called ricin, making the oil safe to consume. While usually fatal, if consumption of the castor bean doesn’t kill you, you can look forward to symptoms like nausea, emesis, diarrhea, tachycardia, hypotension and seizures, often persisting for up to a week. 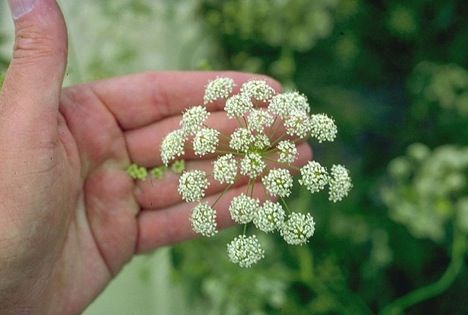 Water Hemlock grows in temperate regions of the Northern Hemisphere, mainly North America and Europe, usually appearing in marshy areas like wet meadows and along stream banks. Called ?the most violently toxic plant in North America," it is the plant’s roots that contain the deadly sap that, when touched or eaten, causes grand mal seizures and death. 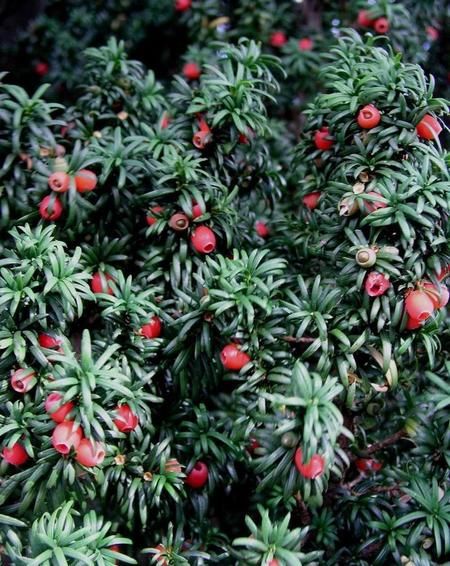 One of the most deadly trees in the world, these evergreens are common in the forests of Europe. With the exception of the berries, all of the tree is toxic, and the Yew was once used by early herbalists to induce abortions. Sadly, the result was often fatal to both mother and child.

Consumption of the Yew in even tiny amounts causes cardiac issues that result in death. It is quick-acting and there is no antidote. 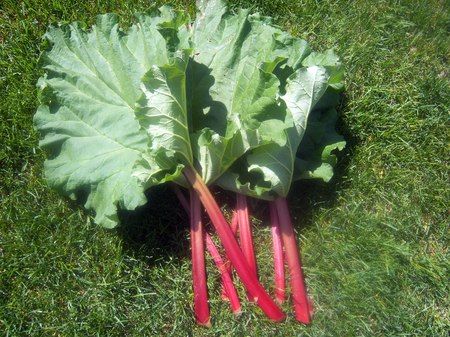 While some people enjoy eating the stems of this plant in desserts like Rhubarb Pie, eating Rhubarb leaves can be fatal. Eating large amounts of raw or cooked leaves causes difficulty breathing, burning of mouth and throat. Symptoms set in within an hour of eating the leaves and lead to convulsions, internal bleeding, coma, and death. 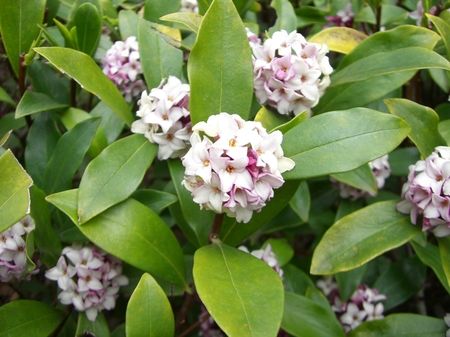 Native to Europe, Asia, and north Africa, this broad species of plants has fragrant flowers and highly poisonous berries. Commonly planted in baskets and other planters, even a handful of these red or yellow berries can cause burning of the mouth and intestinal tract, followed by coma and usually, death. 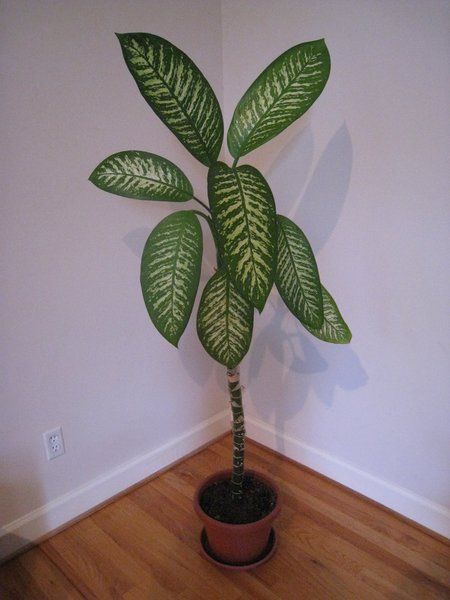 A common shade-loving household plant, Dumb Cane is a tropical plant that is among the most poisonous plants in the world. Chewing on any part of this leafy plant causes intense pain in the mouth and throat, excessive salivation, and in rare cases, severe swelling of the throat that can lead to strangulation. 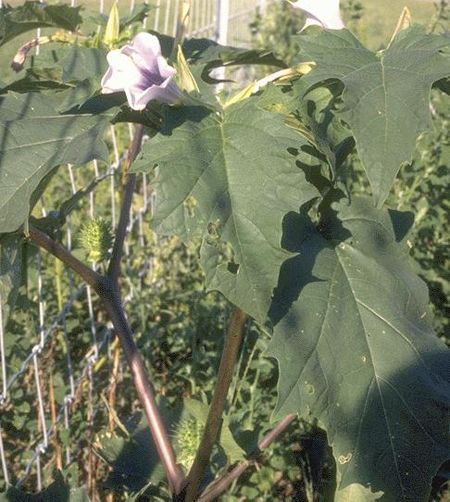 The very first plant poisoning death in the United States is credited to this little weed: Jimsonweed. The Jamestown, VA settlers used jimsonweed to poison British soldiers, who then spent 11 days in a state of insanity until they came to their senses (and didn’t remember a thing). Turns out those soldiers got off easy; symptoms such as abnormal thirst, vision distortions, delirium, incoherence, and coma are often fatal.

Also called devil’s trumpet, angel’s trumpet, devil’s weed, stinkweed, locoweed, and hell’s bells, people who attempt to consume this weed recreationally for the hallucinogenic properties often get more than they bargain for because it’s nearly impossible not to overdose. In South Africa, they call them ;mad seeds.