Meteora, Greece, is a special place. It is home to one of the world’s wonders – six magnificent monasteries still exist there, perching on huge pinnacles of stone as high as 1,300 feet (396 meters) from the ground. To reach these high places of worship, the believer had to climb, as there were no steps (added in the 20th century), using crude ladders, ropes and their own hands.

These strange but stunning buildings are part of history, and are centuries old. They are listed by UNESCO as world heritage sites, and for good reason. Enjoy and learn about the stunning monasteries of Meteora. 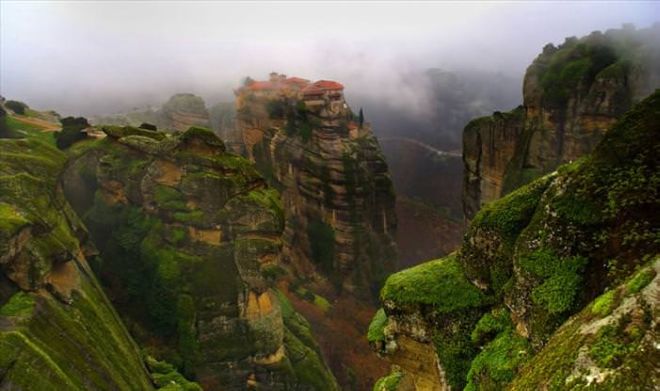 For over fifty millennia, say scientists, the caves of Meteoa, Greece, were inhabited. But over time, the inhabitants were raided, again and again, until the ‘hermit monks’ of the caves moved, in the 9th century, to monasteries they built high upon the cliffs. “Access to the monasteries was originally (and deliberately) difficult, requiring either long ladders lashed together or large nets used to haul up both goods and people. This required quite a leap of faith — the ropes were replaced, so the story goes, only ‘when the Lord let them break.’” – Wikipedia.

A view of some of the monasteries. Far left: The Nunnery of Roussanou, perched on a cliff. Middle: Villa of Kastraki. To the right of the village is Doubiani Rock, and to its right is the Monastery of St. Nicholas Anapafsas. Upper right: Great Meteroa Monastery. Only 6 monasteries are still without damage, of those, only one – the Holy Monastery of St. Stephen is inhabited. Nuns reside there today. 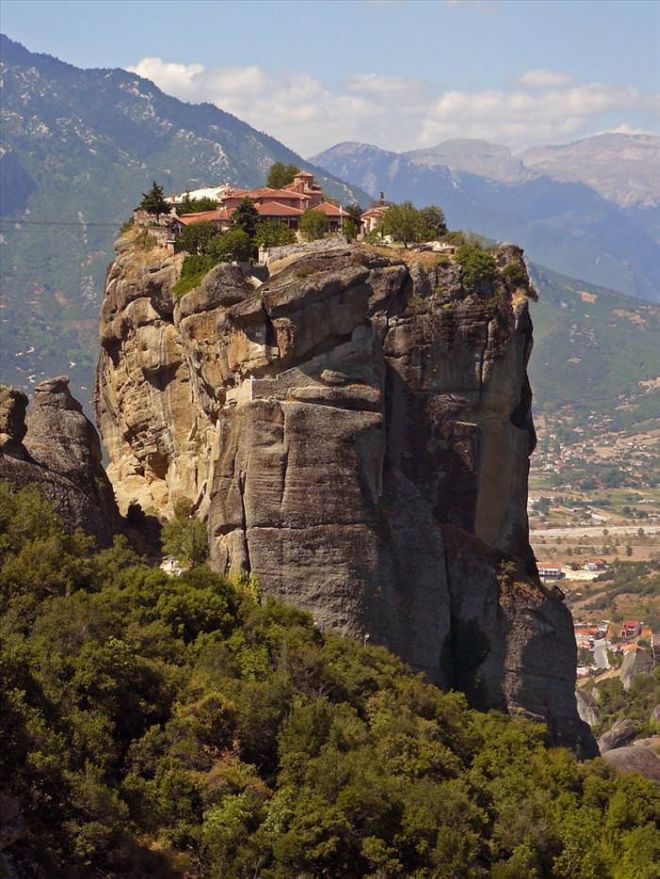 Meteora Monastery of the Holy Trinity, ‘Agia Triada’. This monastery was built in 1475, and has been remodeled and rebuilt many times since then.

The Holy Monastery of Varlaam. This is the second largest monastery in Meteora, and dedicated to All Saints. 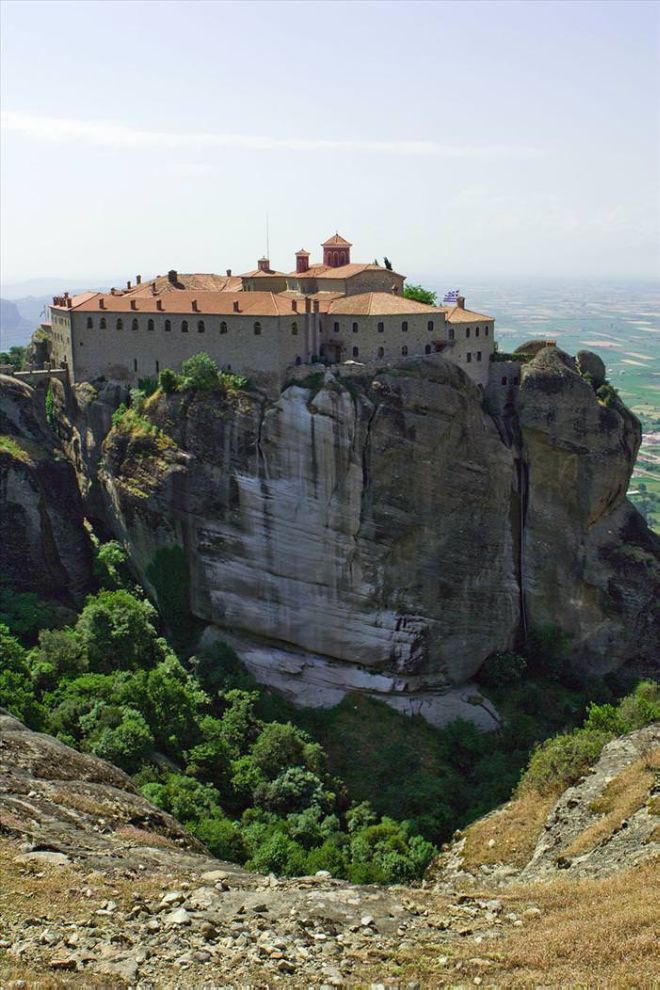 The Nunnery of Roussanou. It was built during the early 1500s, and was not rennovated since 1560. 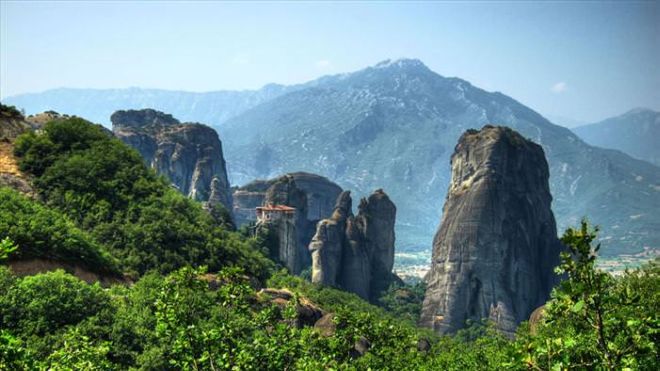 St. Stephen’s Holy Monastery is the only one in Meteora not built on a high cliff. It was built upon what was known as the ‘plain’ during the 16th century, and decorated in 1545. It also has a recent story: During the second world war, the Nazis were convinced that this little church was hiding insurgents, they attacked and damaged the structure and it was abandoned until nuns came back to it and reconstructed. 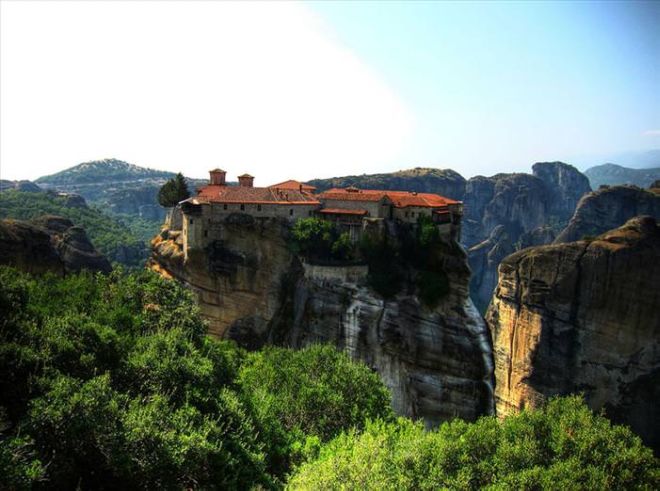 The Holy Monastery of Varlaam, who was a hermit that lived on this rock around 1350. He built a small church there. In 1548, two Greek brothers devoted the wealth of their rich family to building the current monastery we can see today. The stairs, however, were only added in 1923, breaking four centuries of relative isolation. 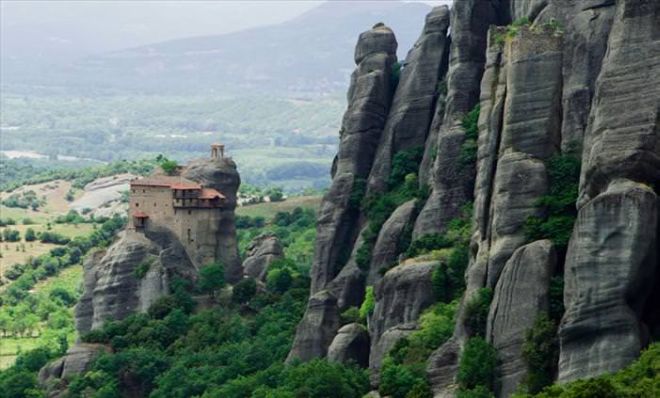 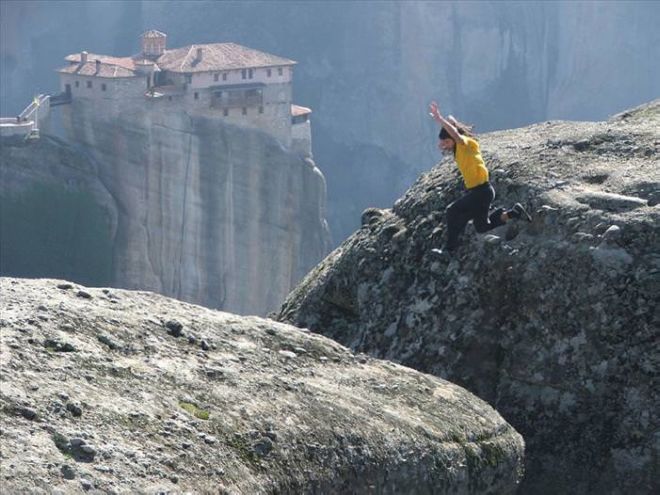 Did the monks jump from one cliff to the other to keep in shape? 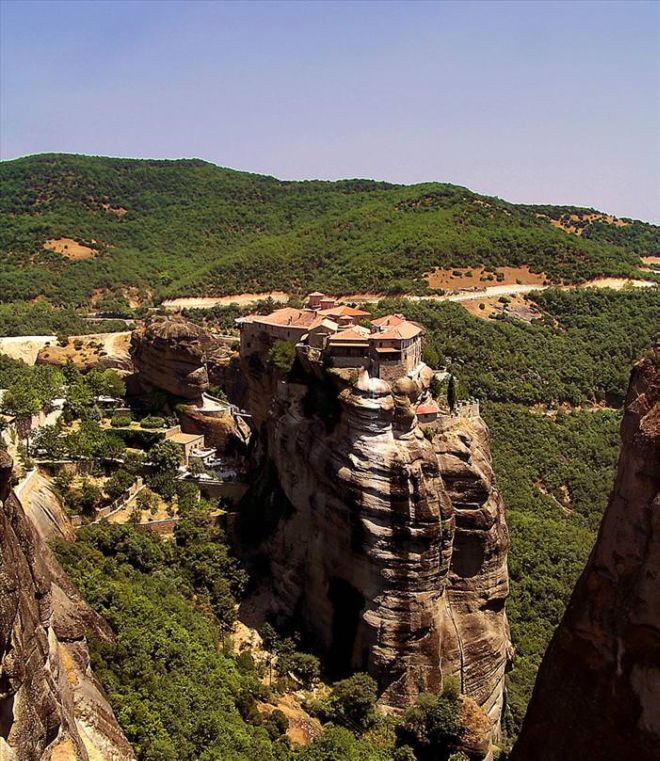 Another amazing monastery perching on the high cliff in Meteora. 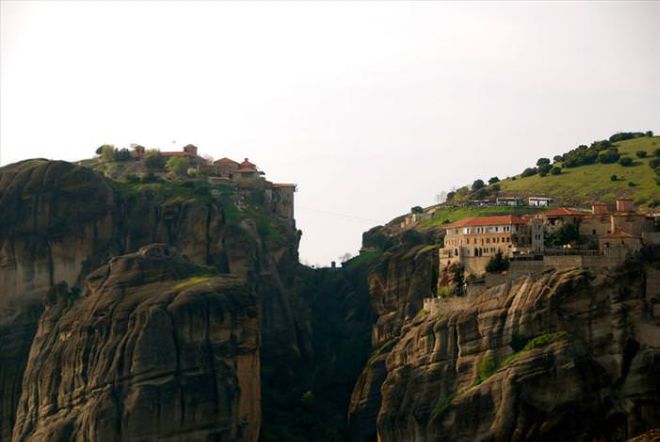 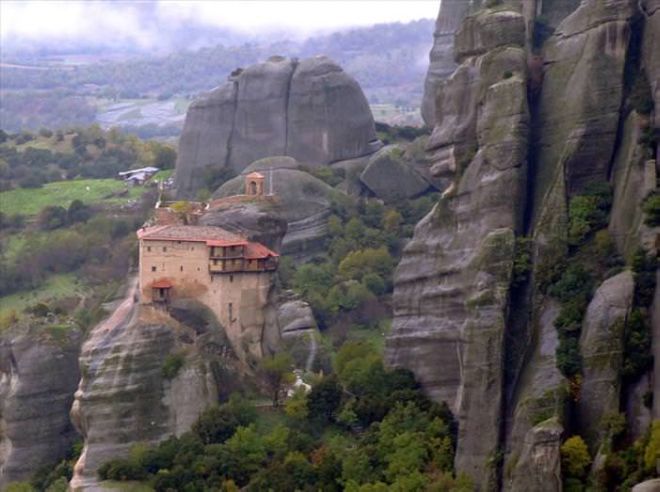 Another angle of the ancient Monastery of St. Nicholas. 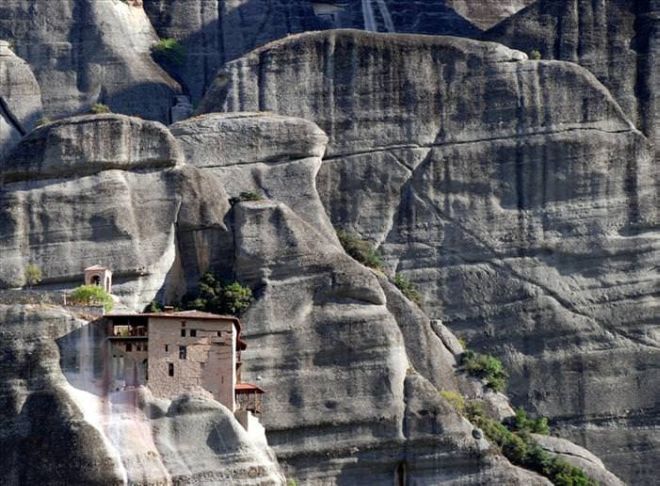 The area of the Meteora Monasteries has been declared a UNESCO World Heritage Site. 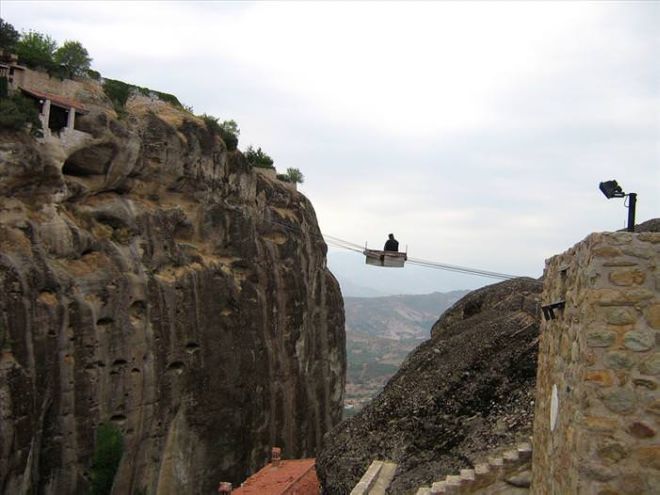 Today’s monks residing in the Great Meteroron Monastery use this mode of transportation to bypass all the stairs, not to mention the tourists! 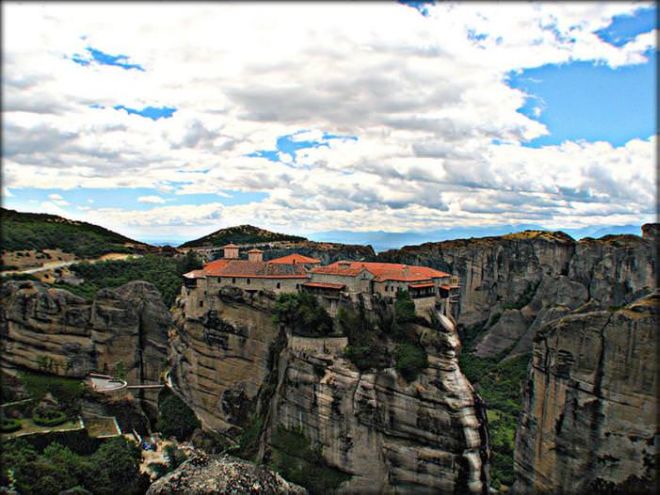 Late afternoon on the cliffs of Meteora. 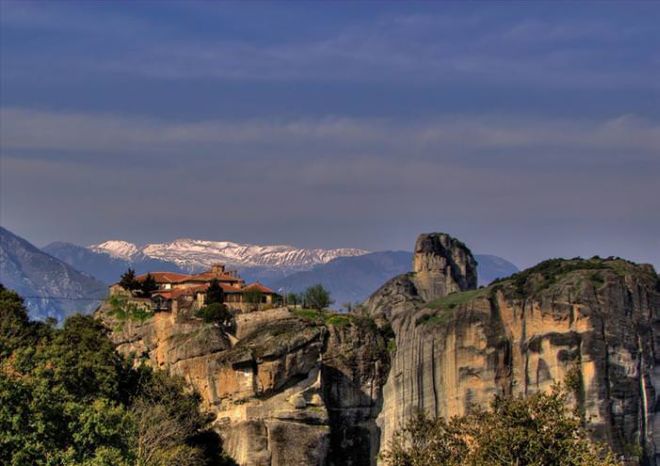 Hanging between heaven and earth – was this what they saw in their vision of the buildings to come?

Meteora under the moon light. You can see the great stone pillars and some of the monasteries built there. The lights below belong to the town of Kalambaka. 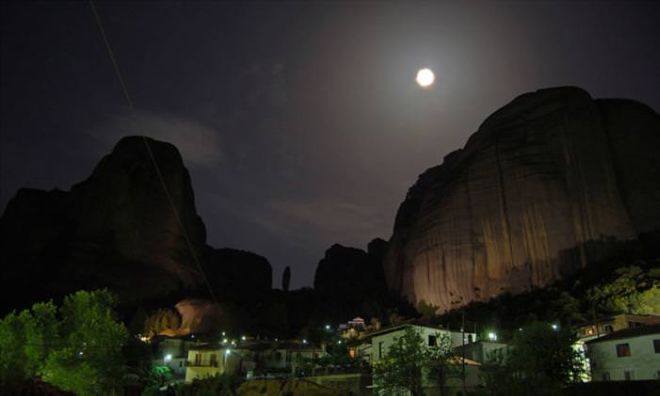 The silhouette of Meteora, seen from the village of Kastraki. 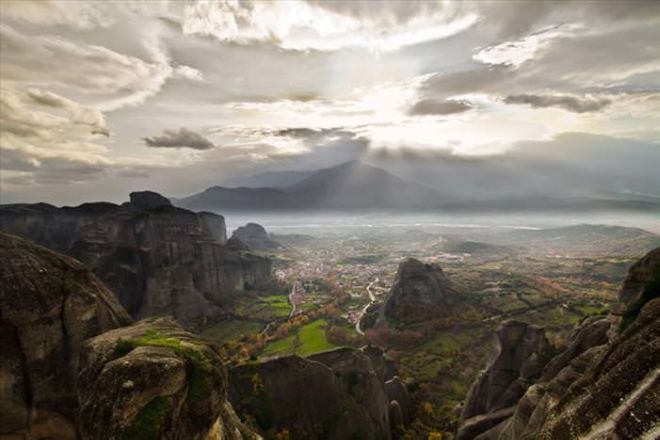 Panoramic view of the Greek-Orthodox monasteries of Meteora.

Another day comes down with mist and fog over the Meteora and the village of Kastraki. What a beautiful and special place.