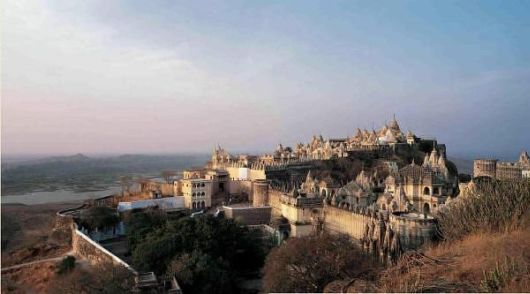 Palitana is the greatest and biggest pilgrimage center and sacred place of Jains. The Shwetambar Jain community believes that the hill of Palitana (Siddhachal) is eternal. Rshabhadev (Adinath), the first Jain Tirthankara, came here several times and preached. Billions of monks and nuns have attained Nirvana (Salvation) from this hill from times immemorial. 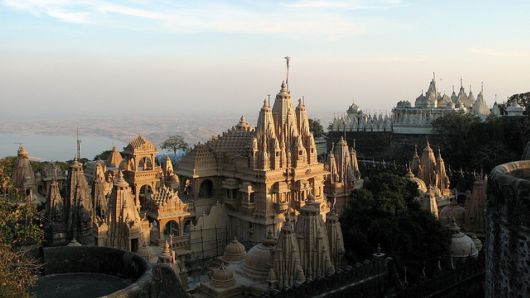 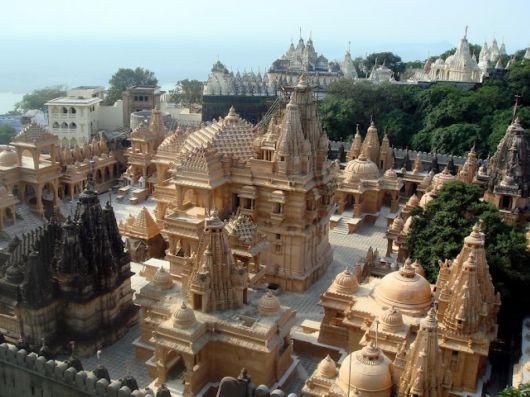 Palitana is a city in Bhavnagar district, Gujarat, India. It is located 50 km southwest of Bhavnagar city . 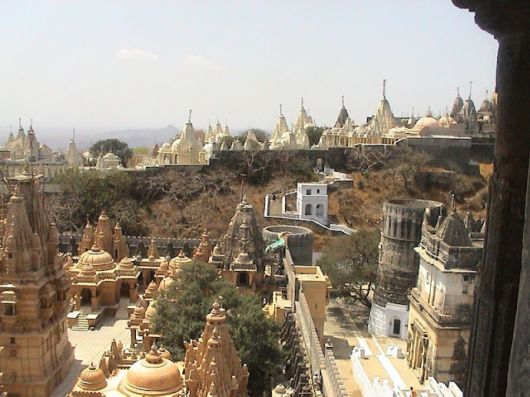 The Palitana temples are considered the most sacred pilgrimage place (tirtha) by the Jain community, and is the world’s largest Temple Complex. There are more than 3000 temples located on the Shatrunjaya hills, exquisitely carved in marble. The main temple on top of the hill, is dedicated to 1st tirthankar lord Adinath (Rishabdeva). 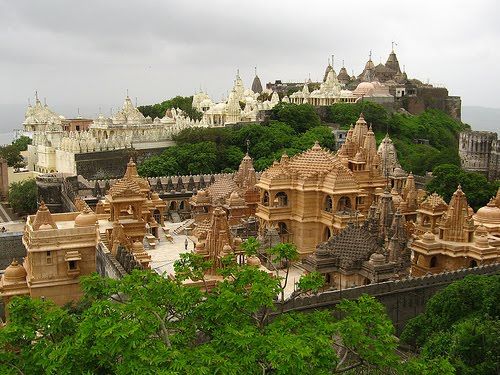 On the top the Shatrunjai Hill is a cluster of Jain temples, built by generations of Jains over a period of 900 years, from the 11th century onwards. The temples are managed by the Anandji Kalyanji Trust of the Kasturbai Lalbhai group. 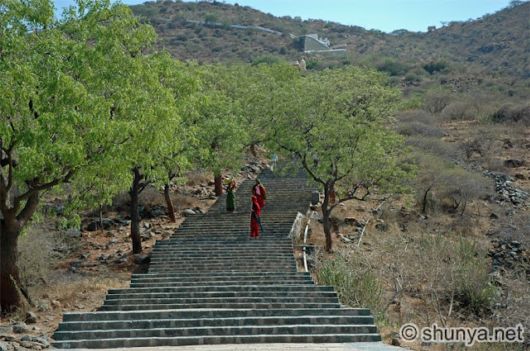 From the foot of the hill to the top there are 3,800 and odd stone steps cut to facilitate climbing.The steps were hewn out of the rock in the 13th century CE during the time of Jain minister Vastupal. 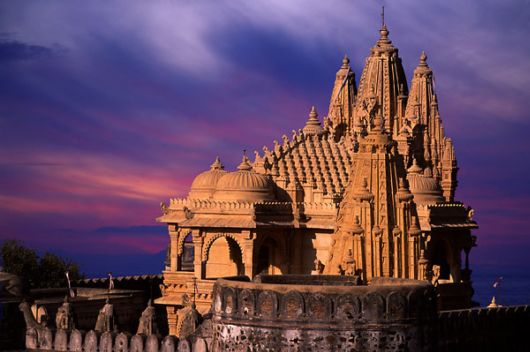 The temples are exquisitely carved in marble, veritable prayers in stone. To an observer, these appear to be ivory miniatures when seen from a distance. Created by master craftsmen, the most important temple is that of the first teerthankara, Shri Adishwar. It has ornate architectural motifs, though in its overall plan it is simpler than the Choumukh. 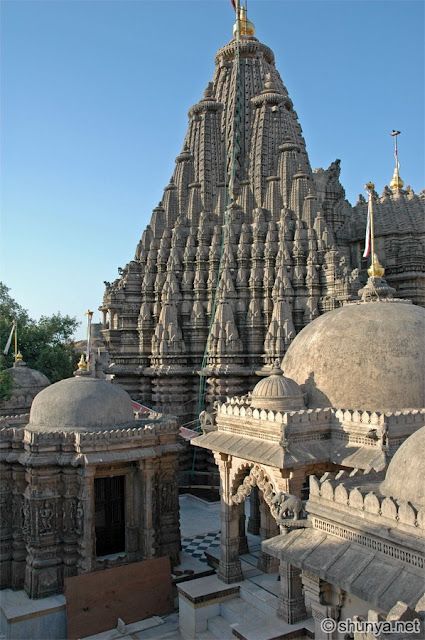 Other notable temples are those of Kumarpal, Vimalshah and Sampriti Raja. Kumarpal Solanki, a great Jain patron, probably built the earliest temple. The temple has a fabulous collection of jewels, and these can be seen with special permission. 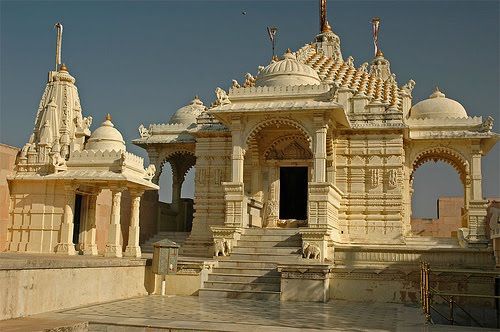 The temples date from 11th to the 20th century 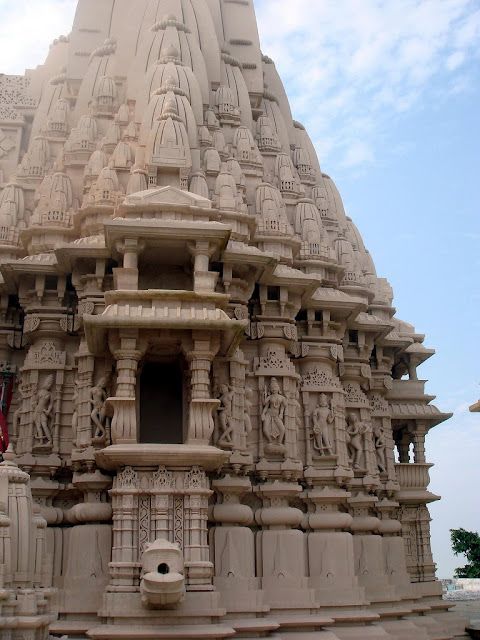 On one special day (Fagun Sud 13), which usually falls in February/March of every year (According to Hindu Calender, it is 13th Day of Sud Cycle in the month of Falgun) there is a huge crowd of thousands of people visiting its place as it is said that on this particular day, millions of Jain followers attained salvation from this Hill. Also the pilgrim on that day is almost 3 times as compared to any other day which is also called as "6 Gaon" which is approximately 15-18 Kilometers of walk and climbing of Hilly terrain. 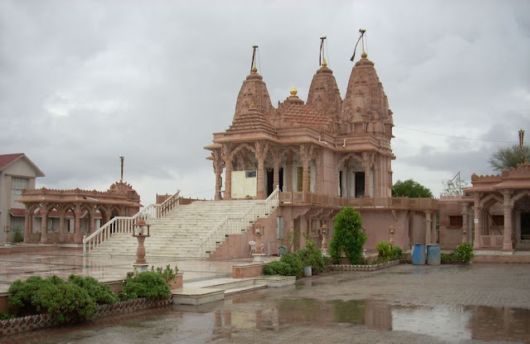 Every devout Jain aspires to climb to the top of the mountain at least once in his lifetime, because of its sanctity. The journey is arduous. The walk up the stone stairway hewn into the mountain face takes about an hour and a half. For those unable or unaccustomed to the strain, sling-chairs are available at a bargain.The code for the climbers is stringent, in keeping with the rigours of the Jain faith. Food must neither be eaten nor carried on the way.They can, however, drink water and water posts are provided all along the route 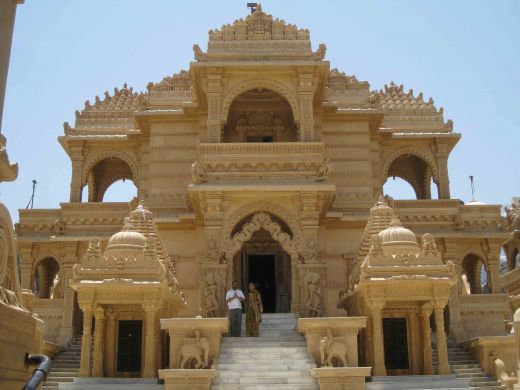 Moti Shah Toonk (Temple) at the top of Siddhachal hills 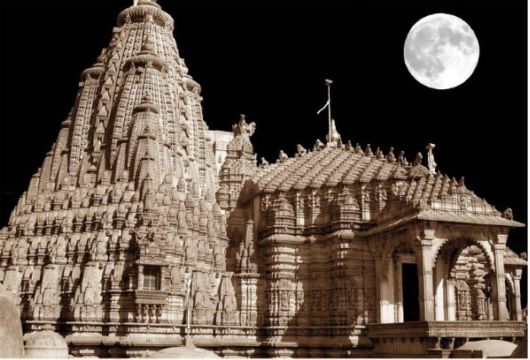 The descent must begin before it is evening, for no soul can remain atop the sacred mountain during the night. Such is the mystique of Palitana, the summit of Shatrunjaya. While atop one can also visit a Muslim shrine of Angar Pir. The childless women seek the Pir’s blessings to be blessed with children. They offer miniature cradles to the Pir and the shrine is strewn with such cradles. 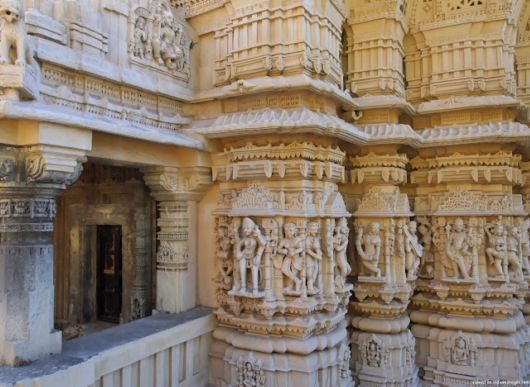 A recently concluded count reveals that there are a total of more than 27,000 idols of jain god on this mountain alone 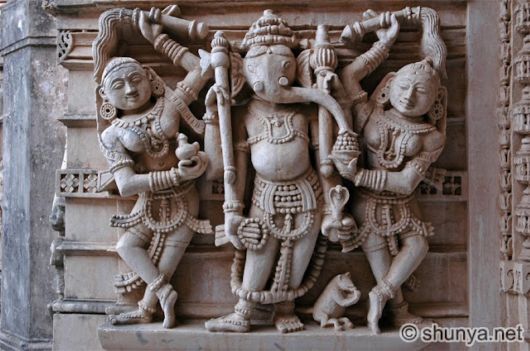 No one is allowed to sleep overnight including the priest, because the temple city has been built as an abode for the Gods 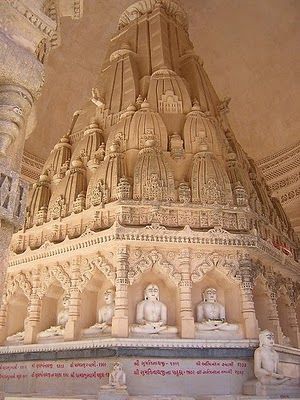 There are 900 temples big and small on the two summits. The sculptures that adorn the marble temples present a feast to the eyes. You need not be a Jain to admire the spectacle. Generations of Jain all over the country have contributed their mite to make Shatrunjay Hill what it is today. 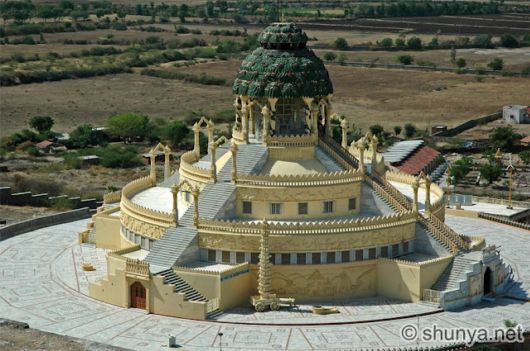 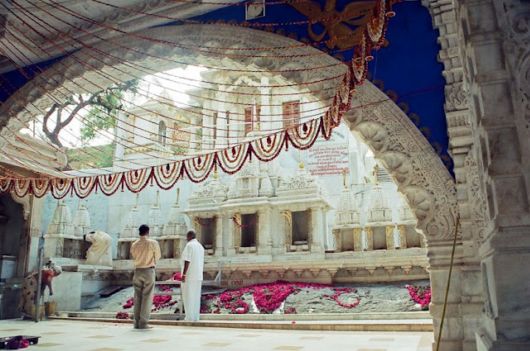 It is said all the Jain Tirthankars, excepting Neminath, had attained nirvan on Shatrunjay Hill. This fact adds to the veneration the devout have for the place. The place is therefore called Siddhakshetra where one attains moksh.The mountain is associated with Rishabhdev, the first Tirthankar who is also known as Adinath. 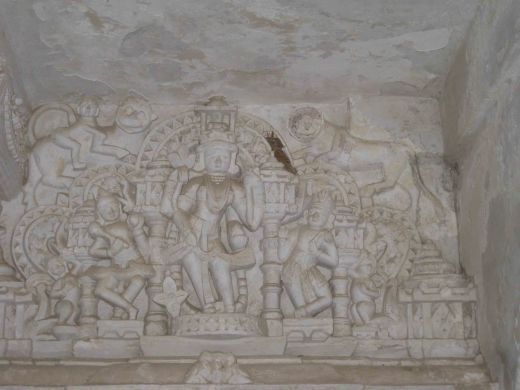 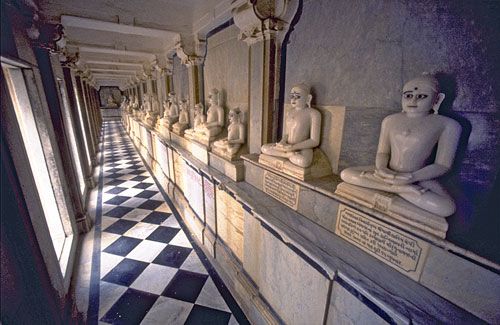 The main temple at the top contains his idol in padmasan. He belonged to the Ikshvaku Dynasty of Ayodhya. So Rama was his ancestor. Adinath visited the Shatrunjay Hill 93 times. 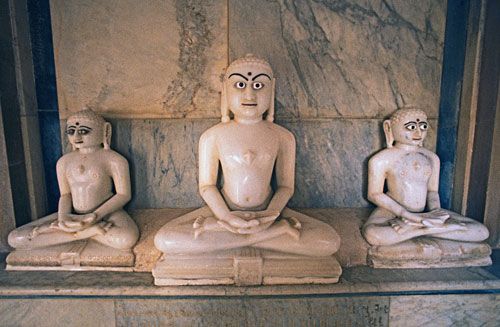 Every shrine has idols of Tirthankars adorned with jeweled eyes. 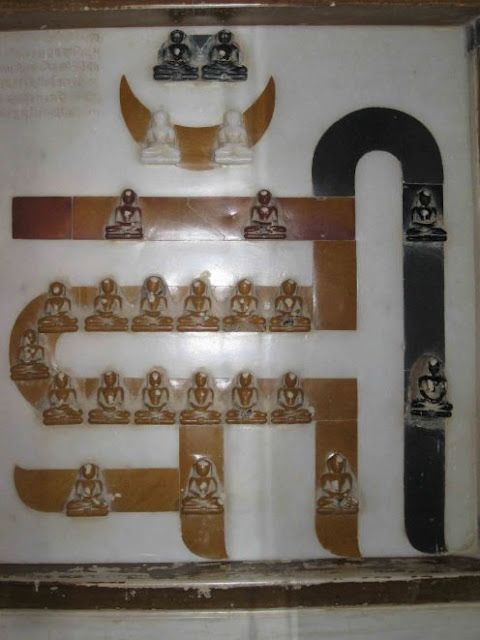 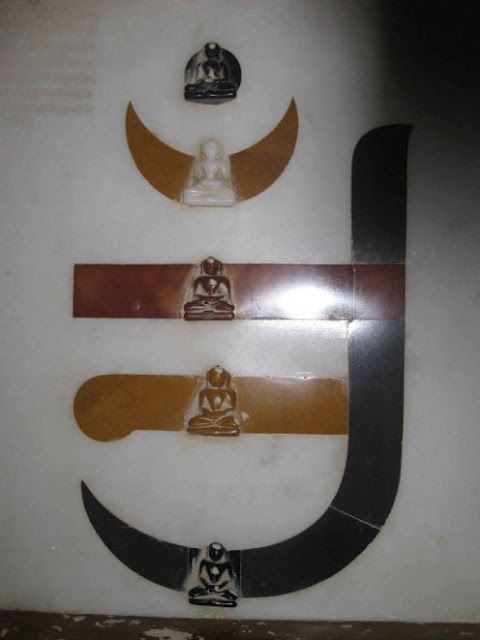 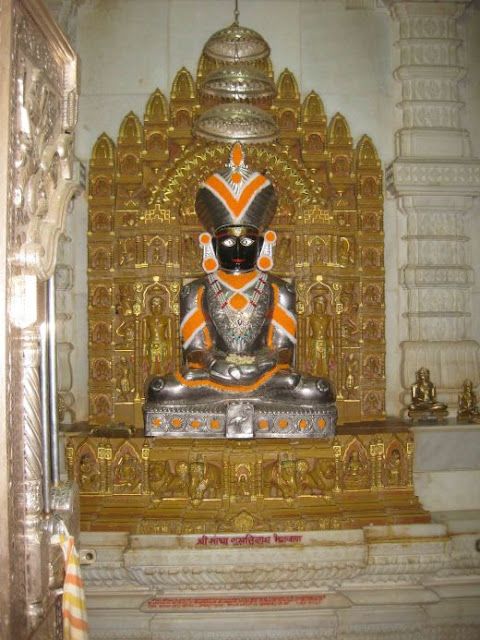 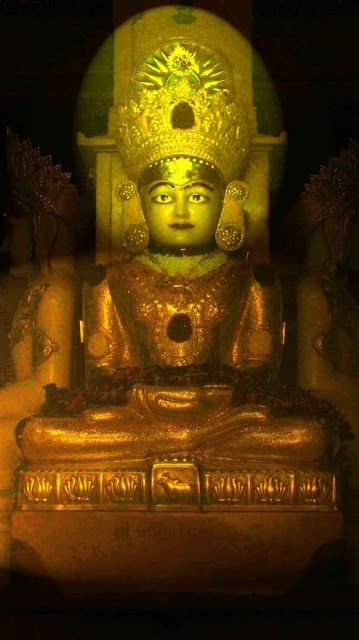 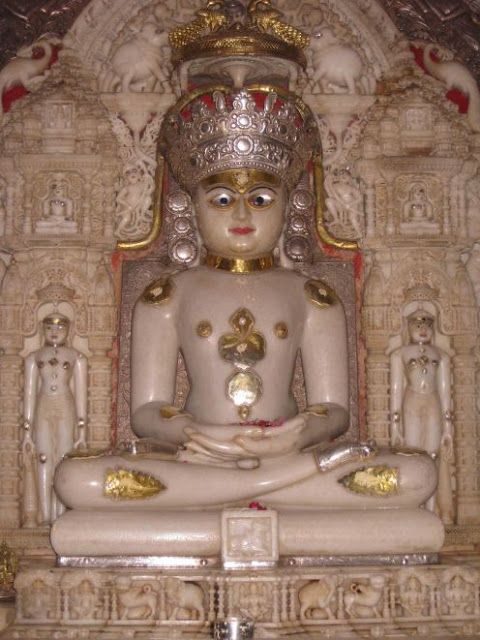