Matmata cave town – a town of caves located along small Berber speaking town in southern Tunisia. Some of the local Berber residents live in traditional underground "troglodyte" structures. Originally "Matmata" – the name of one of the tribes of the Berbers, who inhabited this area. Later the name of the village was also the name of the people who built their own houses in the form of in-depth excavation of caves in diameter from 8 to 13 meters. In some of them you can only go down the rope or the rope ladder. The structures typical for the village are created by digging a large pit in the ground. Around the perimeter of this pit artificial caves are then dug to be used as rooms, with some homes comprising multiple pits, connected by trench-like passageways. 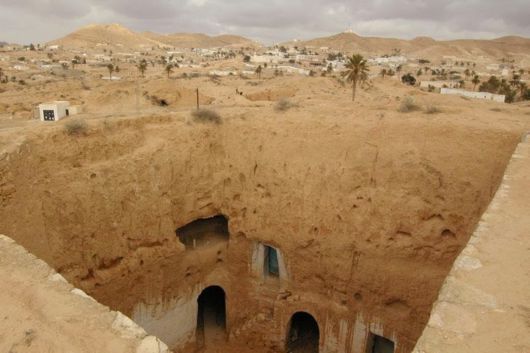 The origin of this extraordinary place is not known, except from tales carried from generation to generation. The most improbable account says that underground homes were first built in ancient times, when the Roman empire sent two Egyptian tribes to make their own homes in the Matmata region, after one of the Punic wars, with permission to kill every human being in their way. The dwellers of the region had to leave their homes and to dig caves in the ground to hide from those invaders, but they left their underground shelters in the night to attack invaders, which appeared to be very effective in sending the killer groups away from Matmâta. A myth was made those days, that monsters emerge from beneath the ground and kill land usurpers. In any case, the underground settlements remained hidden in very hostile area for centuries, and no one had any knowledge of their existence until 1967. 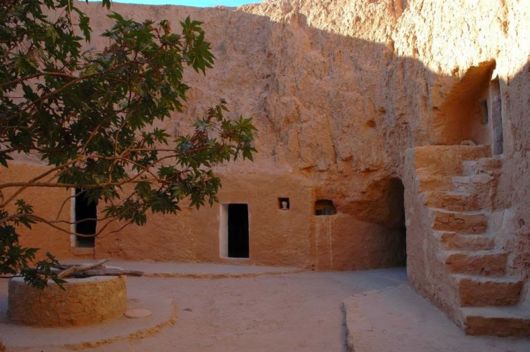 The way of survival in those severe conditions was difficult ? since Tunisia is famous for prolific olive oil production, the men went searching for work north of the villages every spring, when the olive season began, getting back home in autumn, when the season was over. They were usually paid in olive oil, which they traded for other goods (in present days for money), and thus provided enough food, clothes and other things for normal life of their families. 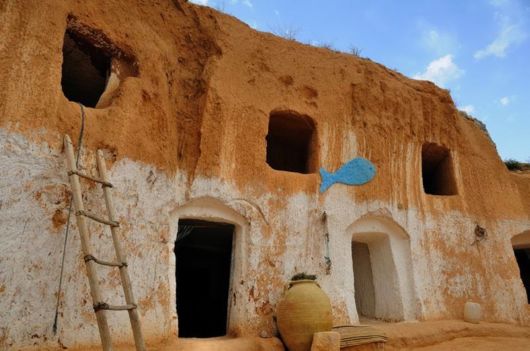 It was not generally known until 1967 that there were regular settlements in this area besides wandering nomadic tribes. That year, intensive rains that lasted for 22 days inundated the troglodyte homes and caused many of them to collapse. In order to get help from the authorities, a delegation was sent to the community center of the region in the town of Gabès. The visit came as a surprise, but help was provided, and the above-ground settlement of Matmâta was built. However, most of the people continued their lives in re-built underground homes, and only a few of the families moved to the new surface dwellings. Today, Matmata is a popular tourist attraction, and most of the population lives on tourism and folklore exhibitions in their homes. 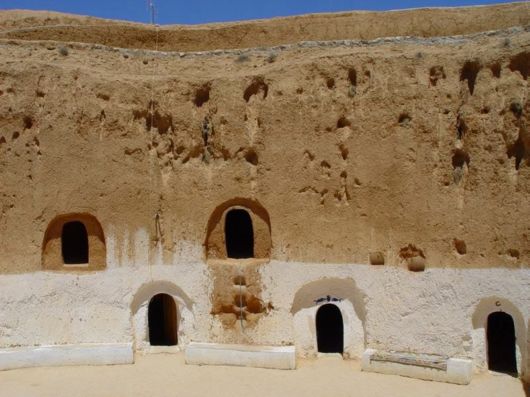 Troglodyte architecture used in "A New Hope" and "The Phantom Menace" (Matmata, Tunisia) 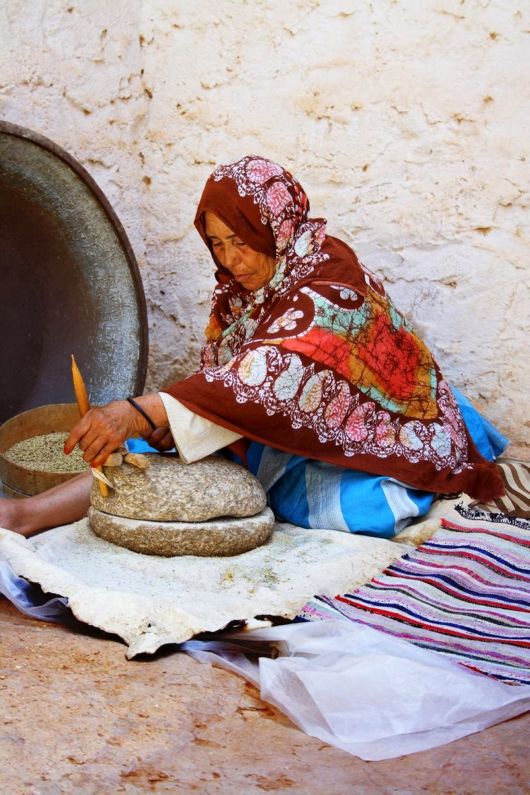 A Berber woman mills semolina by hand outside her beautiful cave dwelling in Matmata, Southern Tunisia. 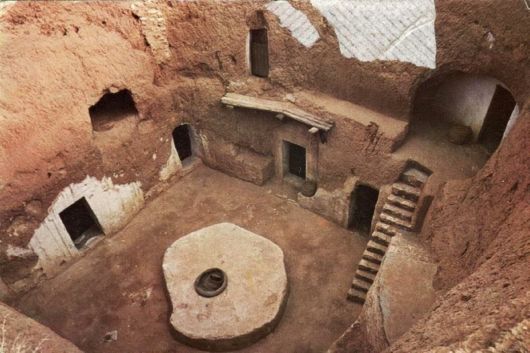 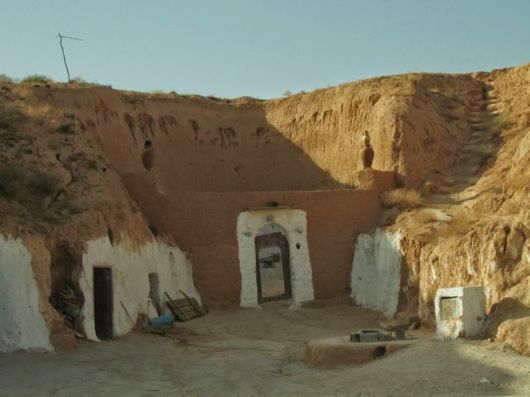 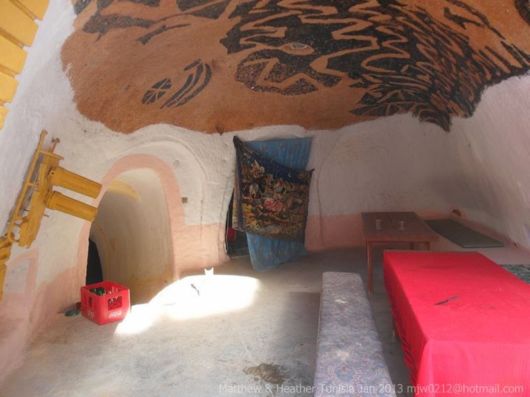 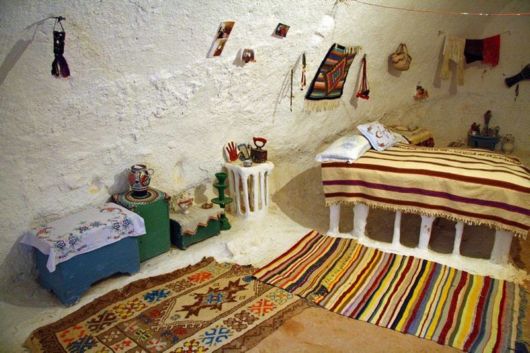 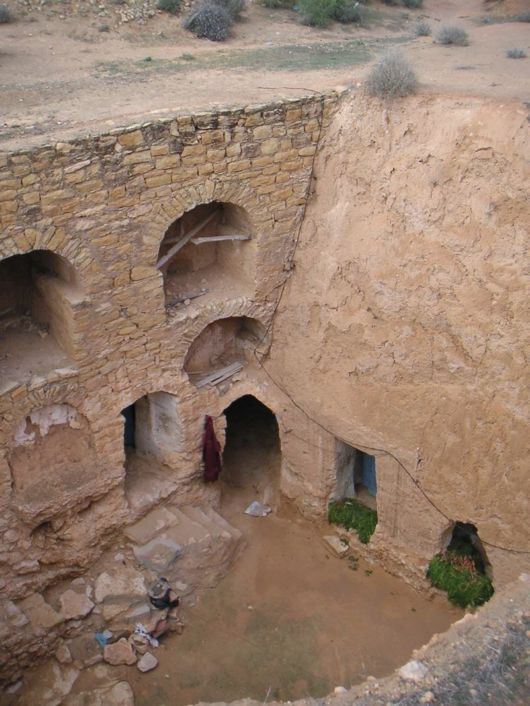 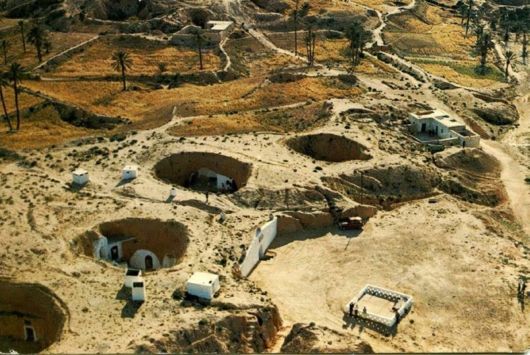