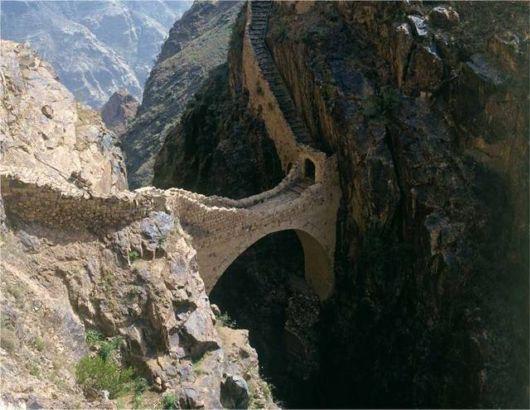 Yemen. North of Sana’a is a beautiful array of two Sahhar mountain (2306 m) and Mafluk (2215 m), and around – the green land of Wadi Vaara, famous for its mild subtropical climate. It also houses one of the main attractions of the northern part of the country – a village-fortress Shikhar (163 km north of Sanaa), located on top of the mountain height of 2160 meters, and therefore practically impregnable. Over its long history of this place was the headquarters of the resistance forces and the Turks during the XVI-XVII centuries, and the headquarters of the Royalists during the Civil War of 60s. The village is actually made up of two parts, each of which is crowned with its own mountain peak.

Deep gorge separates the village and connects two parts of it only old bridge Sahhar (Shikhar), built in the XVII century, and with the amazing engineering calculations. A simple architecture Shikhar harmony with the stunning landscapes surrounding area – the sun scorched mountains and gleaming green valleys, which are clean and dry air locally visible for miles neighborhood. 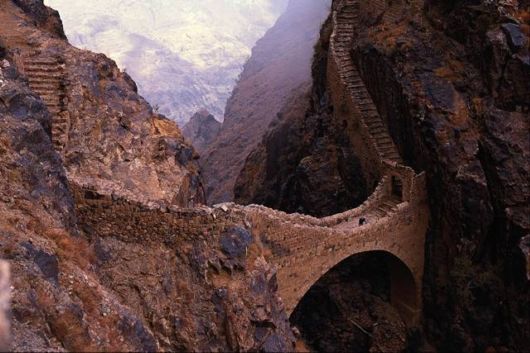 Stone bridge connects two parts of the village Shikhar. Was built the 400 years ago and is an outstanding example of architecture of the 17th century. . Plan design was created by renowned architect Salah Al Yamani (Salah al-Yamani) – most likely a pseudonym 🙂 Long ago the bridge looked like three arches, one above the other, but these days, leaving only the upper arch of the bridge. 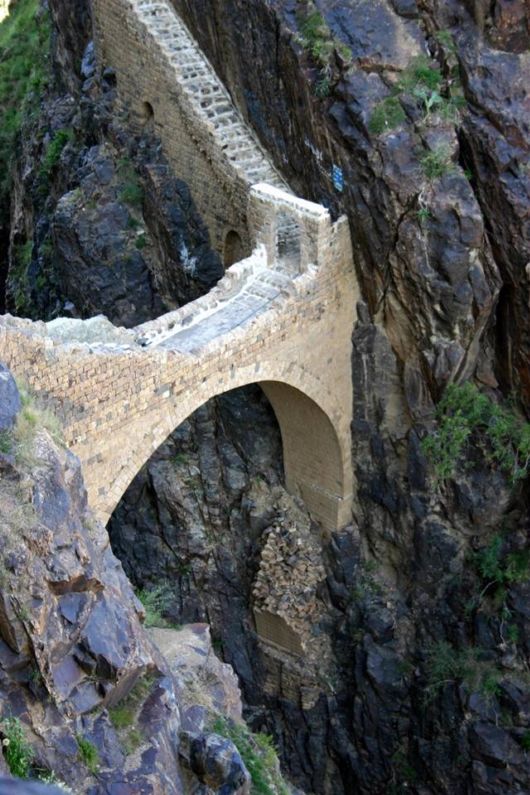 Shikhar lies on top of the mountain height of 2160 meters and almost unapproachable, so before it is actively used to house military headquarters. Now to the village and the bridge, respectively, too hard to get there: Road disgusting. Night at Shikhar is a bit scary: electricity not used and not to be killed, people are walking around with a headlamp. 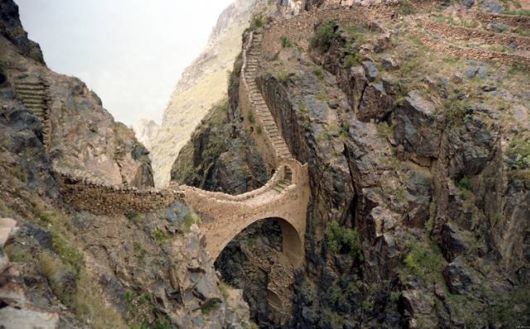 Despite the fact that the bridge is quite frightening, it is a popular tourist destination, and local residents cross it every day. This bridge is even depicted on the coins in denominations of 10 riyal.

On the fragments of the two sides of the valley can be seen that this is not the first set here Bridge. In ancient times there were two different villages belonging to a gentleman, and the bridge was needed to move.

Shihamsky bridge became a national symbol of Yemen, his image adorns e coin worth 10 riyals. But to visit the village is not only because of the great miracle of architecture. The road uphill and bring a lot of memorable experiences and gives amazing views. To get here is not easy – even from the capital will take at least 8 hours in relative proximity to Sana’a (140 km, of which 120 – on the highway). 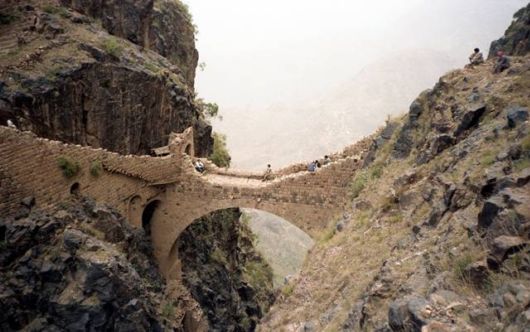 Shiharskie house like small towers. So in ancient times looked classic example of a residential building. Houses are decorated with fanciful carvings, and the doors usually carries his decorative rings are very popular in pre-Islamic times. Usually they were made Jewish blacksmiths, who lived in the mountains.

Once logged in, once you get into a spacious hallway with no windows. Just above the door hollowed small opening for light and ventilation. The doors of many houses can seem irrationally high, but in ancient times, some people have lived under the same roof with livestock. The animals could safely go into the house, made such wide aisles. 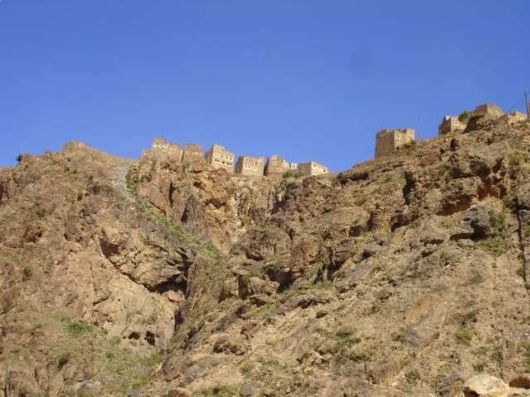 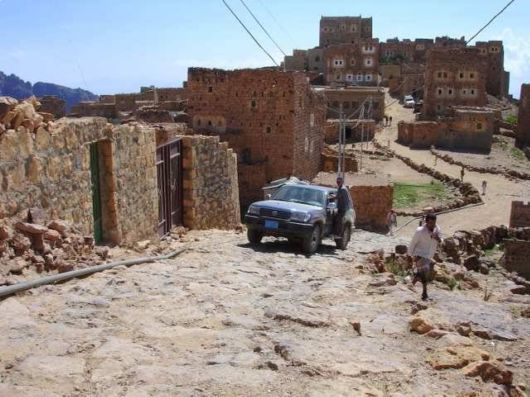 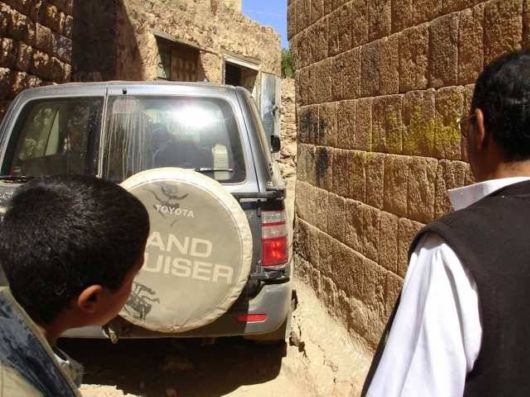 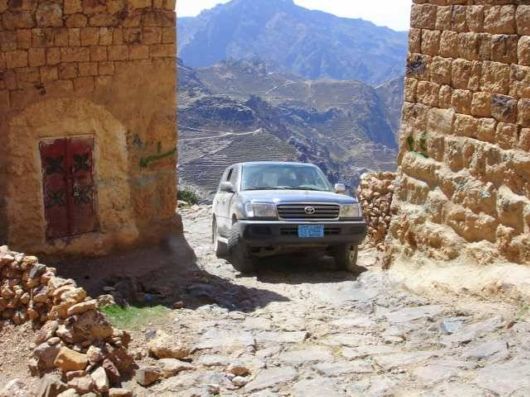 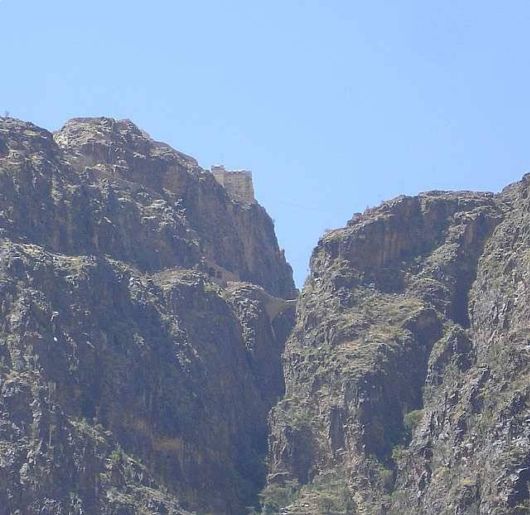 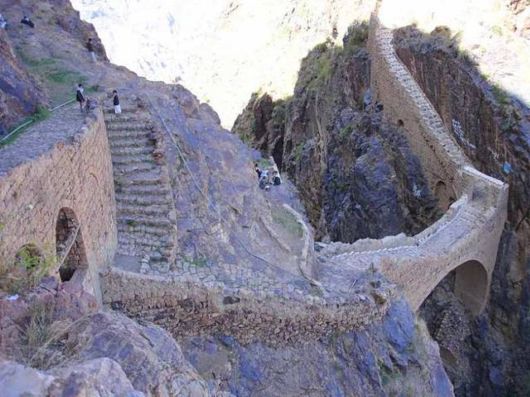 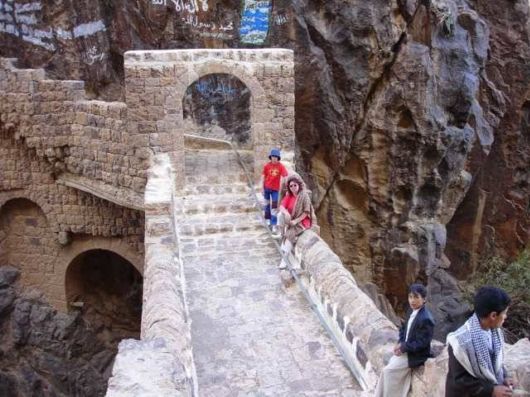 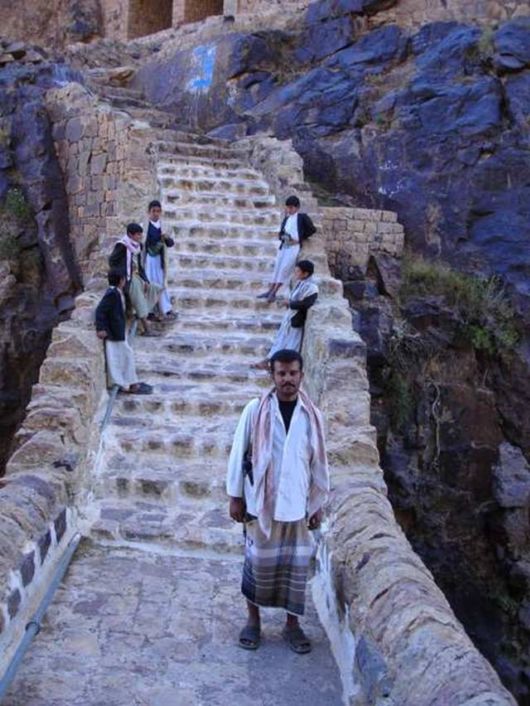 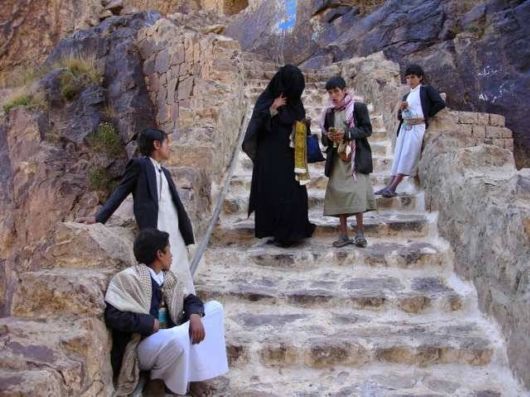 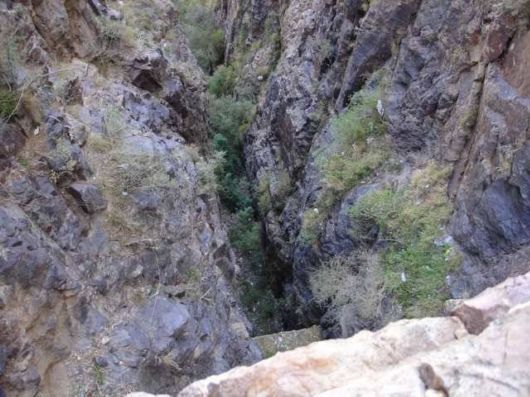 The guidebook says that because the village now and then is at the center of armed conflict, people are suspicious of all outsiders. Probably. But the tourists, a little different category. And now is not the time of those.
Boys ran after us and emotionally discussed how much they will be able to cut down to us. For nothing. Called what that huge sums. All came up again, stripped-to share was less. Discussed the question of what, if we just say thank-you to complain to her relatives, and can not, we have a security guard with a gun? When we reached the car, one of the jerks (meter with a cap) was playing with a penknife at the wheel the car. Actually, the question disappeared when Slava shifted the gun in the car … The painting, to the public .. They all got and the way back in silence .. happily ran after the car. They are spoiled by civilization … tourists …