Hierve el Agua or The water boils, is set of natural rock formations in the Mexican state of Oaxaca that resemble cascades of water. The site is located about 70 km east of Oaxaca city, past Mitla, in the municipal devision of San Lorenzo Albarradas, with a narrow, winding unpaved road leading to the site. At first glance, this formation looks like a frozen waterfall, which in itself is impossible, given the mild climate of southern Mexico. But in fact it is – stone waterfall that sounds even less likely, but it is quite real. This amazing waterfall that looks petrified, is a tourist attraction known as Boiling Water. Natural mineral springs that attract crowds of tourists, are also responsible for the formation of this unprecedented geological formation. Once there actually was a waterfall, but its waters were so rich in minerals that after he was dry, his place is left is a stone formation. 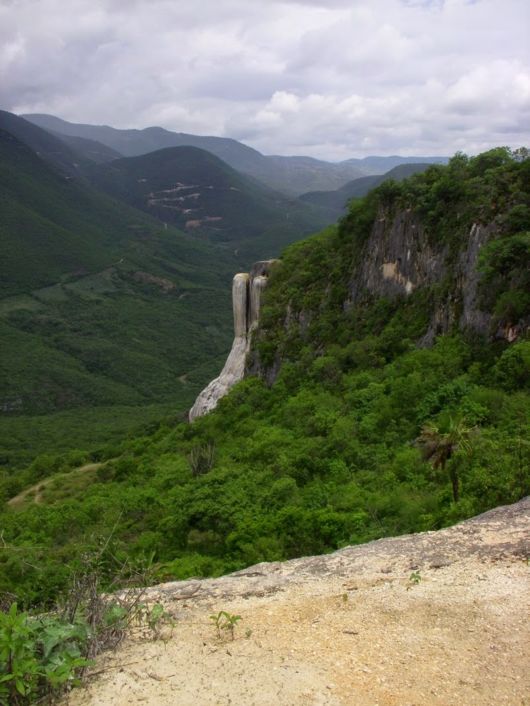 The site consists of two rock shelves or cliffs which rise between fifty and ninety metres from the valley below, from which extend nearly white rock formations which look like waterfalls. These formations are created by fresh water springs, whose water is over-saturated with calcium carbonate and other minerals. As the water scurries over the cliffs, the excess minerals are deposited, much in the same manner that stalactites are formed in caves. One of the cliffs, called the "cascada chica" (small waterfall) or the Amphitheatre, contains two large artificial pools for swimming as well as a number of small natural pools. One of the artificial pools is very near the edge of the cliff. 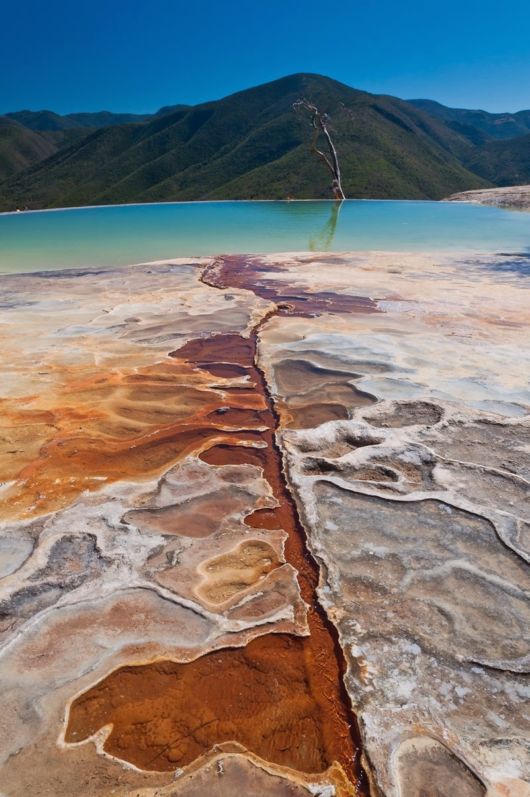 The site consist of two waterfall-like rock formations which have been formed over thousands of years. Both cliffs rise over 50 meters from the valley floorimpressive petrified waterfalls (calcium carbonate) formed from thousands of years ago by the carbonated water runoff. From springs, water falls rugged cliffs over 50 meters high., with one rock formation reaching down twelve metres and the other reaching down thirty metres. The twelve meter one is called "cascada chica" (small waterfall) and "flows" off a base which is about sixty metres wide. The other, "cascada grande" (large waterfall), extends down from a base with which is about ninety metres wide and eighty metres above the valley floor 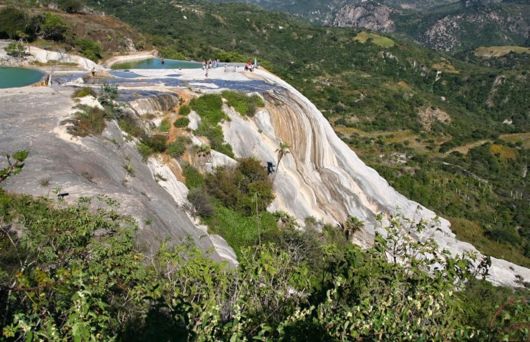 The rock formations are often described as "cascadas de sal" (salt waterfalls), "cascadas petrificadas" (petrified waterfalls) and "cascadas pétreas" (rock waterfalls) . The falls are formed by relatively small amounts of water which is oversaturated with calcium carbonate and comes to the surface through cracks or figures on the mountainside. The water has a temperature of 22 to 27C. As the water runs down the rock face, it forms large stalactites similar to those found in caves. The flow of water from the spring varies significantly between the dry and rainy seasons. 95% of the surface rock formations are of calcium carbonate; however, lower layers of both rock and water currents are little known as they are sealed by the above layers. The calcium carbonate gives the formations a white or near white appearance, but other minerals that can be present in the water, such as silver, barium and iron can also be found and determines the color of a particular stalactite. The calcium carbonate in the water is due to rainwater which passes underground. First it absorbs carbon dioxide, and forms molecules of carbonic acid. This acid comes into contact with underground marble and partially dissolves creating calcium bicarbonate. When the water runs above ground, the excess minerals fall out. 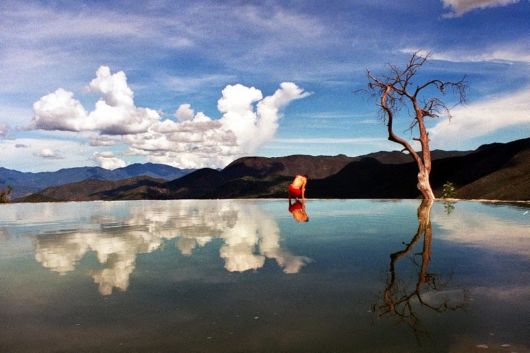 The waters, with their high mineral content, are reputed to have healing qualities. The more easily accessible and more often visited of the two waterfalls is the "cascada chica," also called the Amphitheatre. This cliff rises over fifty metres above the valley floor, where there is a natural platform about sixty meters wide. This platform has four springs. The water from three of the four springs is captured by a number of small natural pools and two large artificial pools in which visitors can swim. The lower of the two pools is very close to the cliff edge and was built in 2007. In these pools, the water appears a turquoise green due to the mineral concentration. The fourth spring is located closest to the edge and responsible for most of the waterfall rock formation. Two of the four springs on the Amphitheatre side rise from the level floor and appear to bubble up, which is the source of the name. The bubbling action of these and some other springs is thought to occur due to construction of underground water currents. This bubbling action leads to the name of the area, Hierve el Agua (the water boils). Water constantly flows out of the springs and the process of depositing the calcium carbonate is ongoing, which can be seen on the walls of the artificial pools. 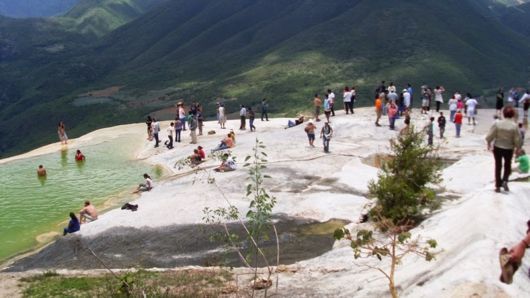 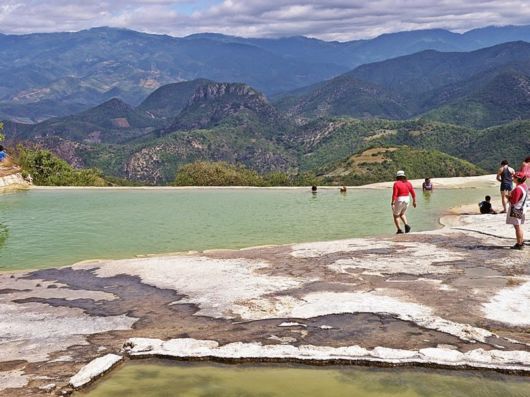 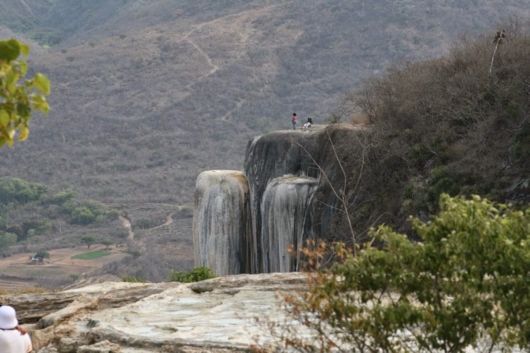 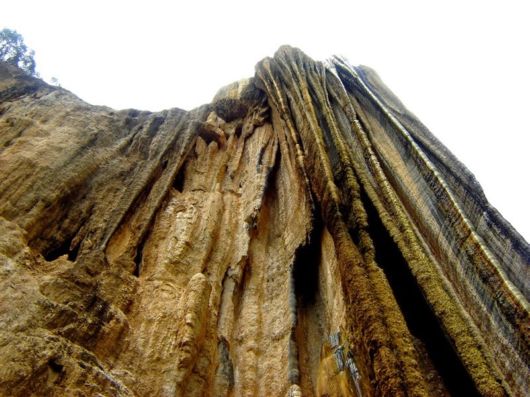 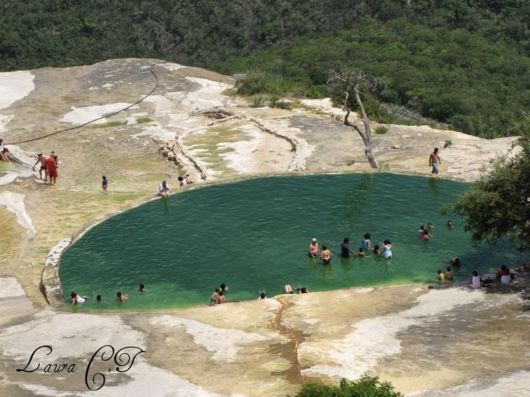 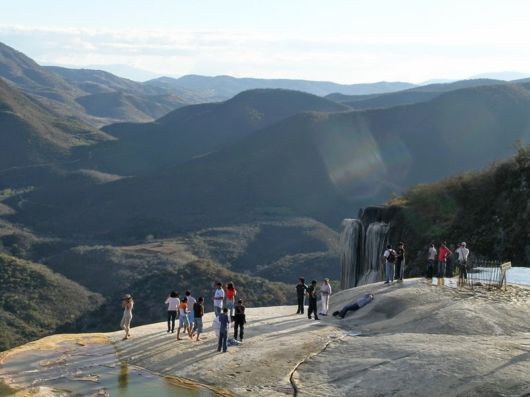 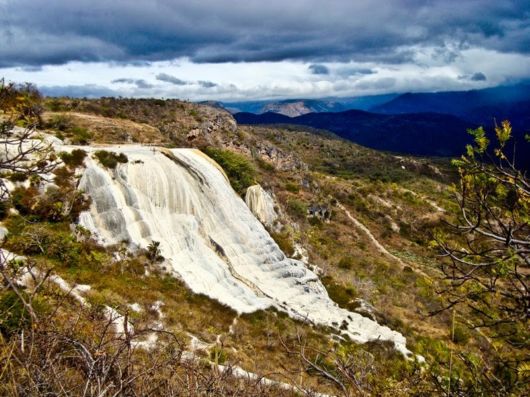