From time to time, we hear about an archeological dig that discovered some fascinating or bizarre buildings and objects from ancient times. These findings provide us with a window to a long-forgotten past, and to life in earlier periods of humanity. Did you know, however, that there are also some spectacular archeological sites located underwater? This collection will give you a few examples of places that were home to people until they were swallowed by water, only to be revealed many years later. These places are proof that we never truly know what lies below the surface?

A lone belfry marks the location of what was once the town of Curon Venosta, which was lost beneath the waters of Lake Reschensee. At its prime, the town had 163 houses and spanned some 130 hectares. Shortly after WWII, it was decided to vacate the town and turn the three local lakes into one large artificial lake, to produce hydroelectric power. 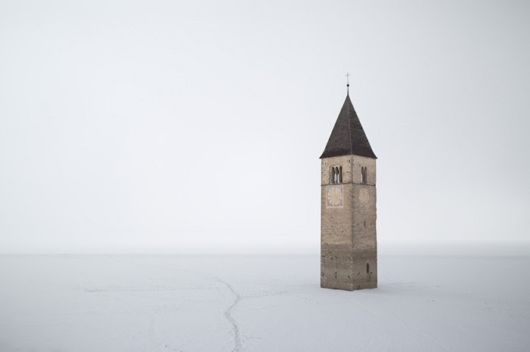 The whole town was flooded, but several years later, the top of the belfry, built in the 14th century, emerged from beneath the surface. In 2009, the water damage to the tower was repaired, and during the winter, as the lake freezes over, people walk over the ice to take the beauty in up close. 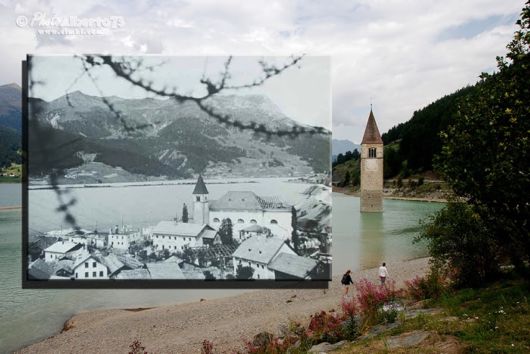 Local legend has it that even though the bells were removed, they can still be heard on particularly quiet nights? 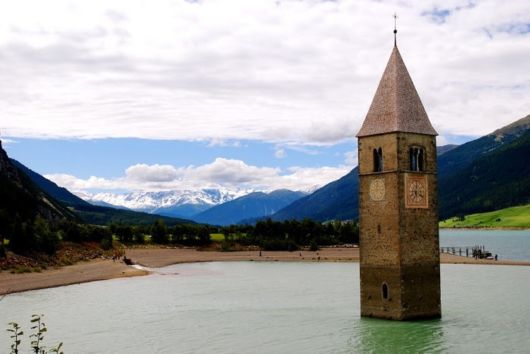 Villa Epecuen is a small village that was established in 1920 along the shore of Lake Epecuen, south-west of Buenos Aires. The village grew and by 1970 the population reached 5,000 people, with nearly 300 local businesses, including hotels, shops and museums. The abnormally heavy rainfall during that year caused the lake?s water levels to slowly but steadily rise. On November 10, 1985, the local dam broke and the village was flooded completely. The villagers fled, leaving much of their possessions behind. 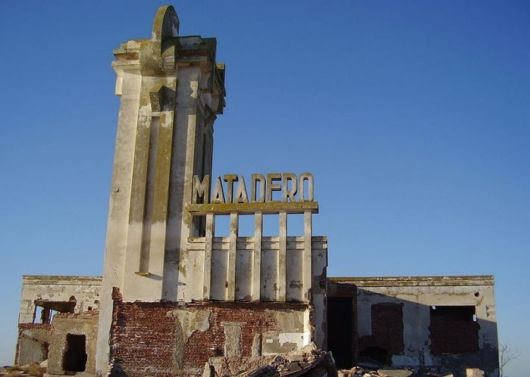 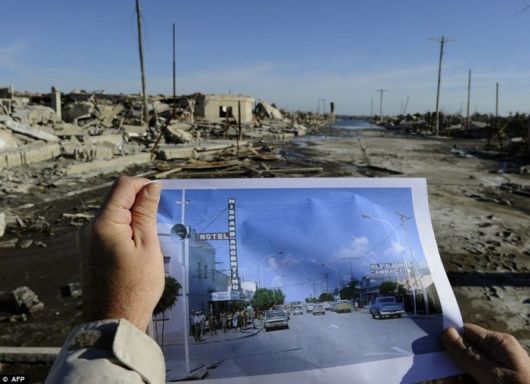 Nearly 25 years later, in 2009, the water levels began to drop, and slowly but surely, the remains of the village started reappearing. None of the villagers returned, even after the area dried out, with the exception of Pablo Novac, an 80 year old man, who rebuilt his home and is now the only official resident. 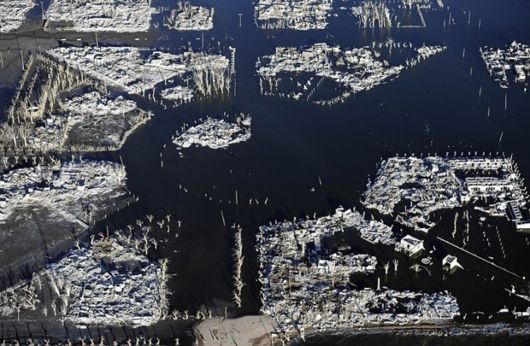 Jaipur?s water palace appears to be floating in the center of Man Sagar Lake, but when it was built in the 16th century, the whole area was dry. During those days, a dam protected the area from the water of the lake, but when it eventually broke, the palace was completely flooded. 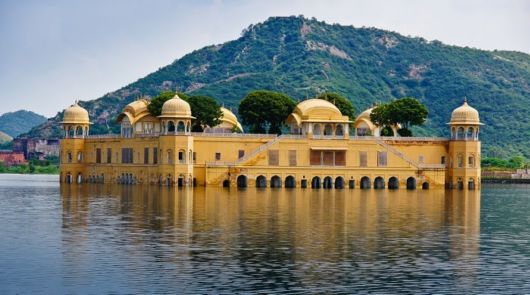 Nowadays the water has gone down significantly, but even so, the bottom four floors of the palace are still under the waters of the lake, and only the top floor remains visible. The top floor was restored and opened to the public, allowing visitors to come in by boat and see the memorial tombs of the Maharaja?s wives. 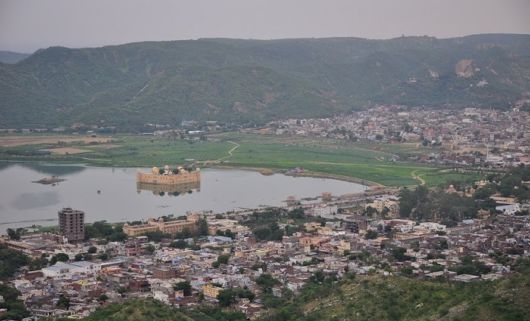 At nighttime, the whole building is lit up, giving it a beautiful-yet-eerie look. 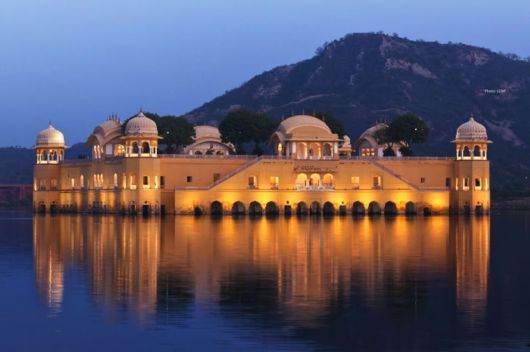 Also known as ?The Green Lake?, this park is famous for its picturesque scenery, green grassy knolls, and a clear lake that lies in its center. 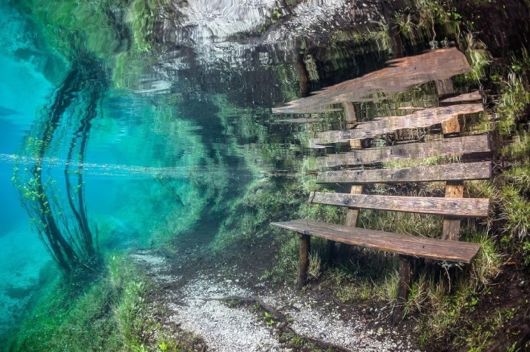 When the park was built, the lake was less than 2 meters (6.5ft) deep, but as snow melted from the surrounding mountains; the park was completely flooded, turning the whole area into a spectacular underwater park, lying under 12 meters (40ft) of water. 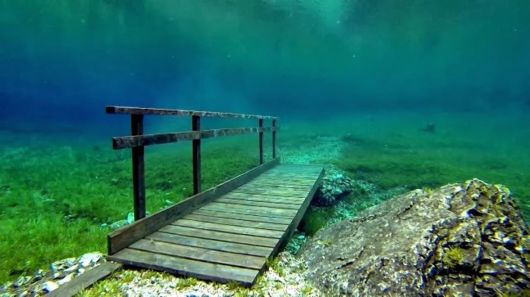 These days, visitors can take a stroll through the park only during the winter, when the mountains freeze and water stops seeping into the park. During the warm months, however, the park disappears once more, becoming accessible only to divers. 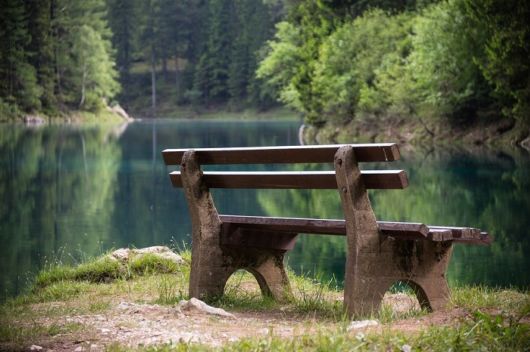 In 2015, a severe drought hit the Chiapas region of Mexico, but also revealed the remains of an ancient church in the center of Grijalva River. 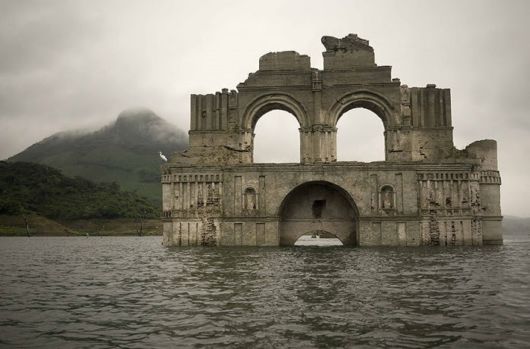 The church, constructed in the 16th century by local monks, was lost in 1966 following a massive flood that caused the water level to rise by 24 meters (78ft). Despite the difficulties caused by the drought, it at least had one beneficial outcome. 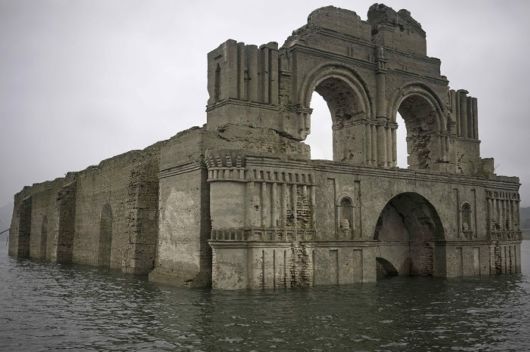 Not far from the tallest waterfall in the Balkan region of Europe, lies the Mavrovo National Park, named after the lake that lies in its center. Nestled between snowcapped peaks, sprawling grasslands and breathtaking views, there lies an abandoned church that turned the area into a tourist attraction. 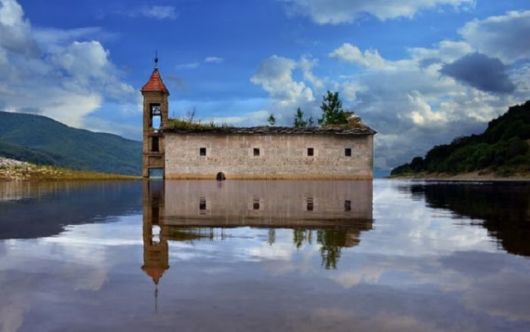 The Church of St. Nicholas paid the price for the formation of an artificial lake, which was formed to power a local hydroelectric power station. Initially, the water covered the church completely, but by the end of the project, the top of the church reemerged, and these days visitors can see the whole upper floor. 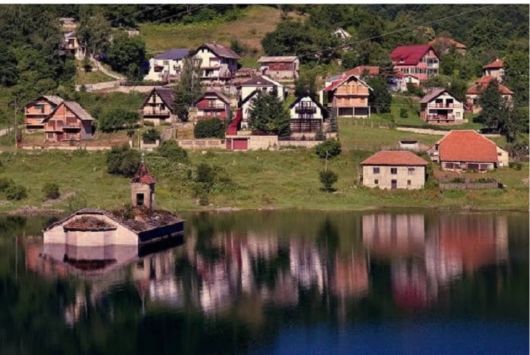 Even though weeds grew between the cracks, and parts of the roof collapsed, the church became part of the local scenery, attracting many tourists annually. 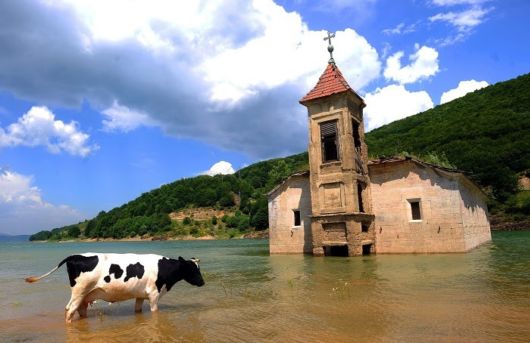 Deep within the waters of China?s Lake Quandao hides an architectonic treasure. Lion City was established during the Han dynasty, between 25 and 220 CE, and includes spectacular stone buildings decorated by intricate statues and carvings, which are still well preserved. 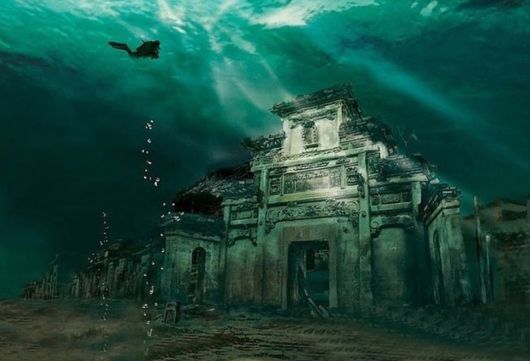 The city was flooded as a result of the construction of a dam, and became an attraction for divers, who descend to depths of 26-40 meters (85-131ft) just to see this unusual sight. 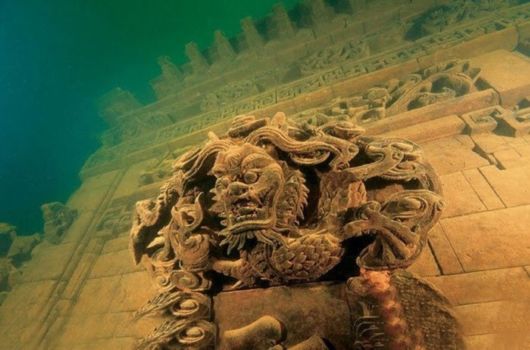 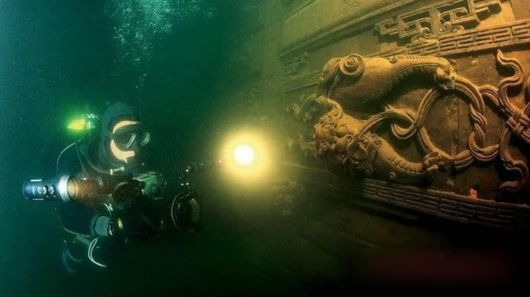 Thomas Smith, a Mormon settler after who gave the town its name, established St. Thomas in 1865. However, with the construction of the Hoover Dam, the water levels of the Colorado River rose, flooding the town, and by 1938 it was completely abandoned. 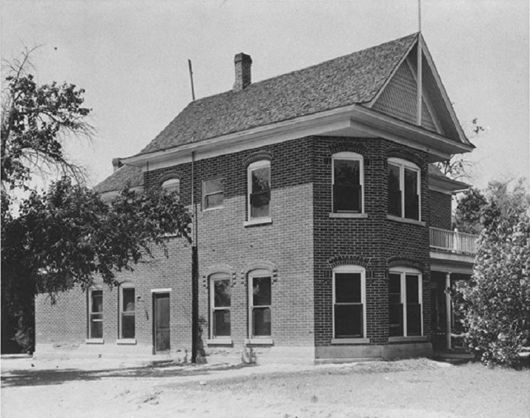 After a long drought, local fishermen discovered the foundations of the city that hid beneath the river?s water. Water levels have since descended even more, revealing more parts of the old town. 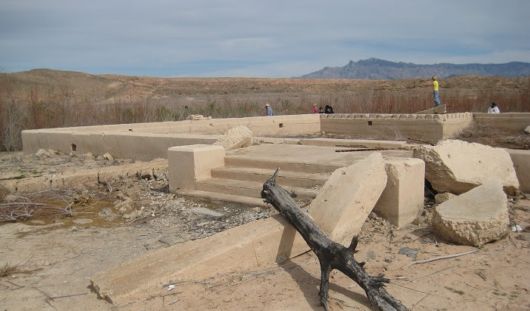 The discoveries did not do much to attract new settlers and the whole area remains a ghost town. 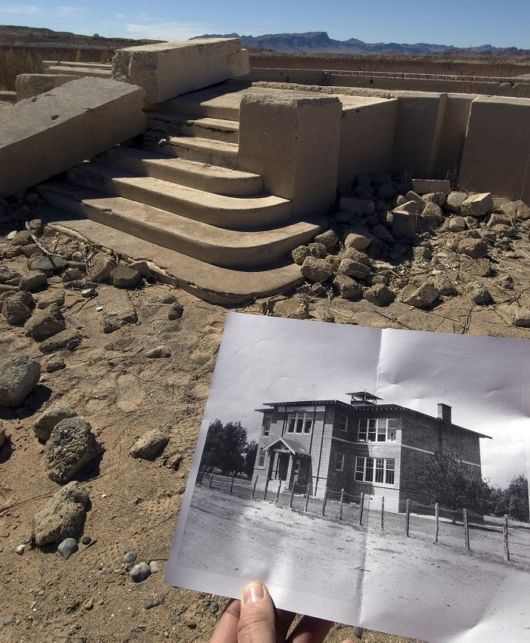 In 1985, fishermen sailing along one of Táchira?s artificial lakes discovered a cross jutting out of the water. The fishermen tried pulling the cross out, but when they couldn?t, they realized that it must be attached to something below the surface. Their theory was proven correct when in 2008, a drop in water levels revealed what the lake was hiding for many years. 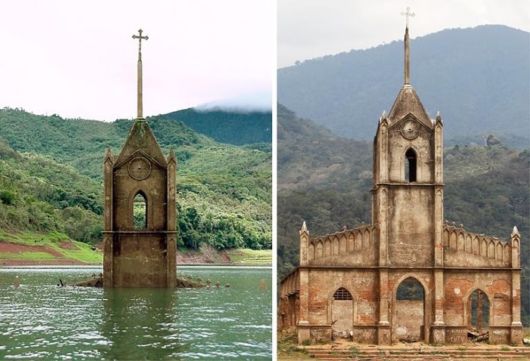 The cross was the tip of the gothic church of a town called Potosi, which was flooded when the local river was dammed to create hydroelectric power. At the time, the whole town was evacuated as water levels rose, claiming the buildings. The town remains flooded, but the church?s belfry is now exposed, and serves as a marker for what still lies beneath the surface. 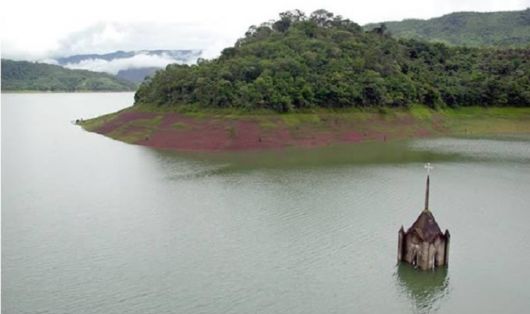