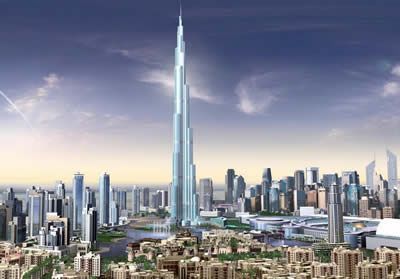 The Burj Dubai will be the world’s tallest building when it opens in 2009. The building is part of a 2 km2 (0.8 sq mi) development called ‘Downtown Dubai’ and is located at the "First Interchange" along Sheikh Zayed Road at Doha Street. The building was designed by Adrian Smith before he left Skidmore, Owings and Merrill LLP (SOM) of Chicago to start his own independent practice, Adrian Smith + Gordon Gill Architecture in October 2006.[3] SOM continues to lead the architectural, structural engineering and mechanical engineering of the Burj Dubai. The total budget for the Burj Dubai project is about $4 billion US dollars and for the entire new ‘Downtown Dubai’, $20 billion US Dollars.

Its shape is inspired by the indigenous desert flowers that often appear as decorative patterns in Islamic architecture, but it also has an engineering purpose: The swirl shape ensures that the mass of the structure lessens as it reaches the top, making the structure steadier. A mixed-use building developed by Dubai’s Emaar Properties, the Burj Dubai will house shops, offices, residences, and entertainment venues. 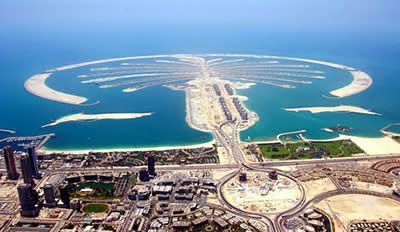 The Palm Islands in Dubai are the three largest artificial islands in the world. They are being constructed by Nakheel Properties, a property developer in the United Arab Emirates, who hired the Dutch dredging and marine contractor Van Oord, one of the world’s specialists in land reclamation. The islands are The Palm Jumeirah, The Palm Jebel Ali and The Palm Deira. The Islands are located off the coast of The United Arab Emirates in the Persian Gulf and will add 520 km of beaches to the city of Dubai.

The first two islands will comprise approximately 100 million cubic meters of rock and sand. Palm Deira will be composed of approximately 1 billion cubic meters of rock and sand. All materials will be quarried in the UAE. Between the three islands there will be over 100 luxury hotels, exclusive residential beach side villas and apartments, marinas, water theme parks, restaurants, shopping malls, sports facilities and health spas. The creation of The Palm Jumeirah began in June 2001. Shortly after, The Palm Jebel Ali was announced and reclamation work began. In 2004, The Palm Deira, which will be almost as large in size as Paris, was announced. Palm Jumeirah is currently open for development. Construction will be completed over the next 10-15 years.
3. Dubailand: world’s largest amusement park 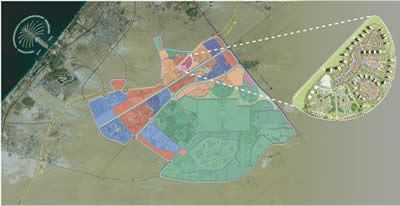 Dubailand is to be the largest amusement park collection in the world. Twice the size of Disney World, it is expected to be a full featured city divided into six theme worlds: 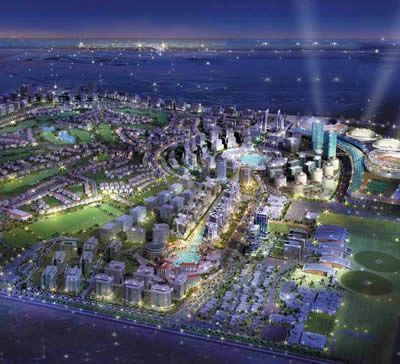 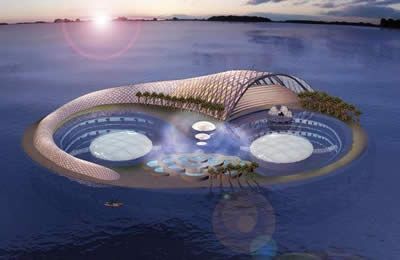 Hydropolis, the world’s first underwater luxury resort, brings new meaning to the "ocean-view room." Situated 66 feet below the surface of the Persian Gulf, Hydropolis will feature 220 guest suites. Reinforced by concrete and steel, its Plexiglas walls and bubble-shaped dome ceilings offer sights of fish and other sea creatures. It’s scheduled to open in 2009.

5. The World Islands: man-made islands in the form of a world map 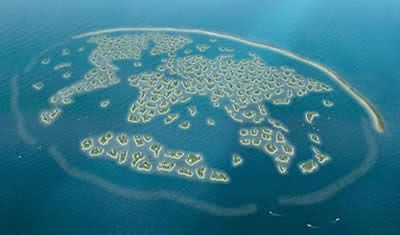 Ever wish the world was smaller? The World is a man-made archipelago of 300 islands in the shape of a world map. The World is being built primarily using sand dredged from the sea. Each island ranges from 23,000 m2 to 84,000 m2 (250,000?900,000 square feet or 5.7?21 acres) in size, with 50?100 m of water between each island. The development will cover an area of 9 km in length and 6 km in width, surrounded by an oval breakwater. The only means of transport between the islands will be by boat and helicopter. Prices for the islands will range from $15-45 million (USD). The average price for an island will be around $25 million (USD). Dredging started in 2004 and as of March of 2007 The World is around 90% complete. According to the National Geographic Channel (The Best of Megastructures) the overall price for the World is $14 Billion US Dollars. 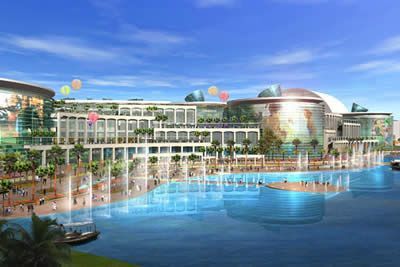 The Dubai Mall claims to be the largest mall in the world when completed. It will cover a total area of more than 12 million ft2, with 10 – 15 individual smaller malls built inside it, consisting of 9 million ft2 of shopping retail space (comprising of a total of more than 1000 stores).

Featured attractions include the world’s largest gold souk; the 850,000 ft2 Fashion Island; one of the world’s largest aquariums; an Olympic-sized ice skating rink; Oasis Fountain Waterfall; WaterFront Atrium; a view of the (soon to be completed) world’s tallest building, Burj Dubai. The mall has already won five awards. It won two awards at the Retail Future Project Awards at MAPIC, Cannes, in 2004, for Best Retail Development Scheme (Large), Best Use of Lighting in a Retail Environment. And the Dubai Mall brochure has won three awards at the Summit Creative Awards 2005, in Portland, Oregon; Gold award for Best Art Direction / Graphic Design, Silver award for Best 4-colour B2B Brochure, and Judges Special Recognition award. The mall is being built by a Joint Venture of Dutco Balfour Beatty and AGCCC for client Emaar Properties and was scheduled to be completed in 2006, claiming to be the size of 50 "international-sized football(soccer) pitches". It is now expected to be completed in 2008. 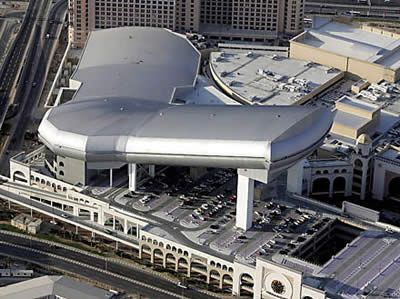 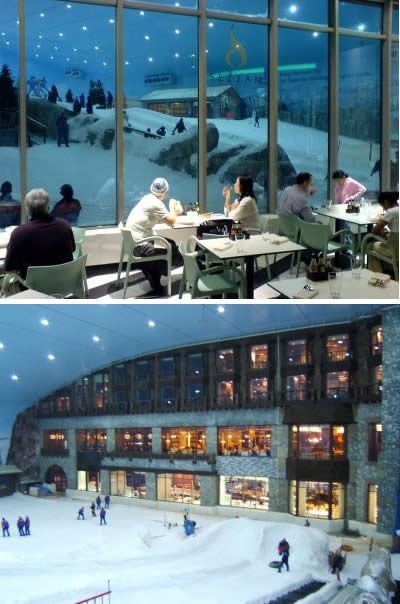 An extremely efficient insulation system is the key to maintain the temperature of -1 degrees Celsius during the day and -6 degrees during the night when the snow is produced.