The Japanese art of gardening is an ancient one. It involves the careful planting of each flower, bush, and tree to achieve a medium between natural and orderly. These gardens are meticulously maintained and often contain ponds & Zen gardens. Join me on a trip through 25 of the most beautiful gardens in Japan: 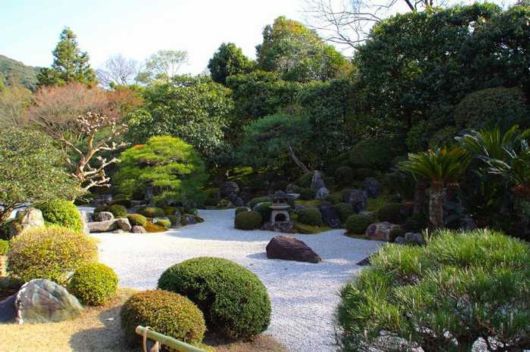 The temple was founded in 1188 and is dedicated to Zen Buddhism. The magnificent Zen garden is overlooked by a teahouse, allowing visitors a relaxing cup of tea as they sit and contemplate. 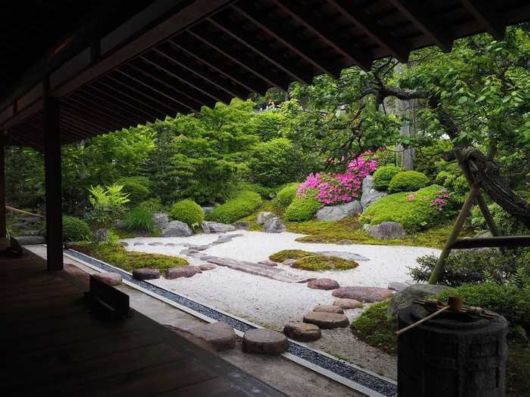 The garden is part of a Buddhist temple, built in 1047. The temple is located by a pond representing the ocean, which separates life and death. It is one of the last of the Paradise Gardens from the Heian period. 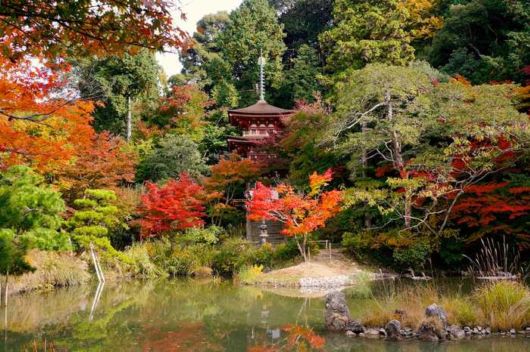 After the death of his mother in 900 C.E., emperor Daigo built this temple in her memory. In the midst of its garden lies a pond filled with water-lilies. It is said that the pond used to be sailed upon by poem-writers, though today you may only stroll alongside it. 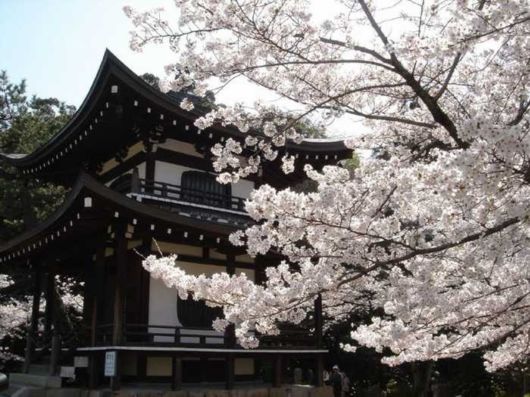 Zen was introduced to Japan by the monk Eisai, who is now buried in the grounds of this temple. Founded in 1202, it?s considered one of the most important Zen temples in Kyoto. 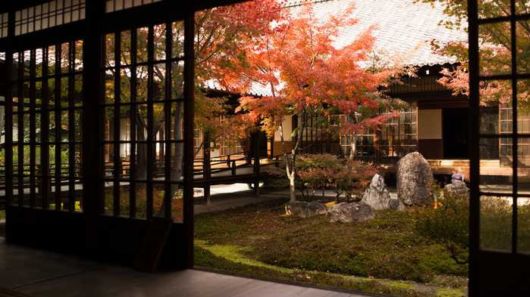 Covering 81,000 square meters (50 square miles), these gardens were built by the founder of Mitsubishi for the enjoyment of his employees. The gardens surround a lake that serves as the focal point of the gardens. There are 3 islands in the lake, with a teahouse on one. 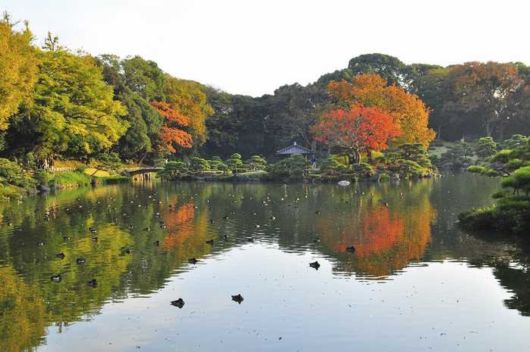 Located in Tokyo, the gardens house Japanese maples that turn bright red in the fall, and a rose garden that produces spectacular flowers. 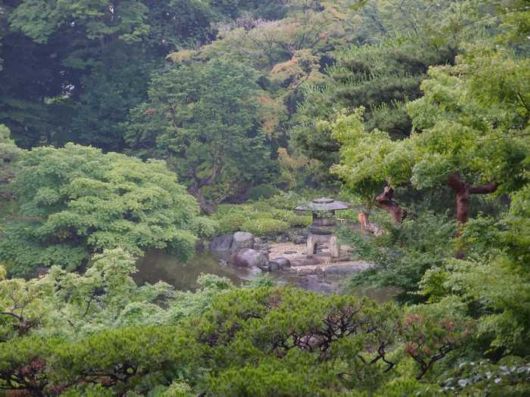 Originally a traditional house from the Japanese Edo period (the end of the 18th century), the Shigemori house is now a garden museum. 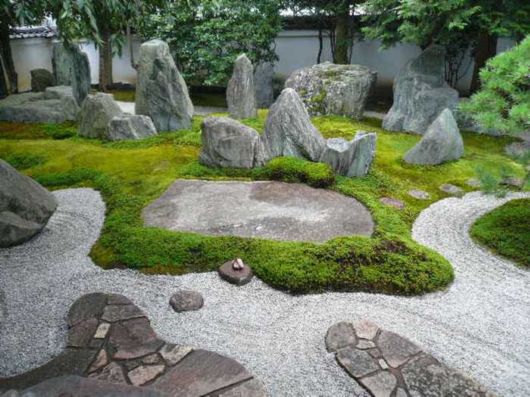 This flower garden is located in Tokyo and is not a traditional Japanese garden. It has one surviving flower garden from the Edo period. Mukōjimacomes from the region?s old name and Hyakkaen was chosen to mean "a garden with a hundred flowers that bloom throughout the four seasons". 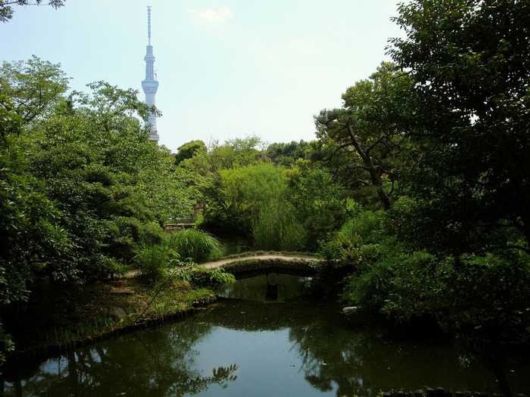 This small garden was once the home of one of Japan?s most loved artists ? Namikawa. It has been preserved and kept in its original state. Not known to many, the garden, while not large, is quite magical. 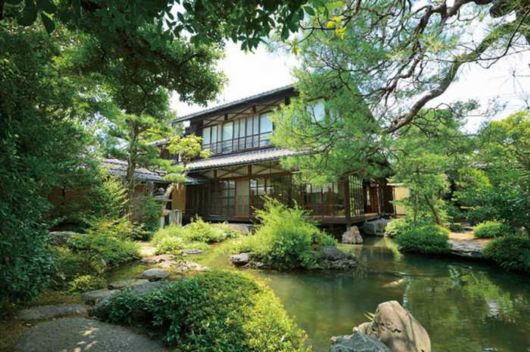 Opened in 1940, this museum was severely damaged by the allies? bombing of Tokyo in 1945. It was renovated after the war, and the garden is now back to full glory. Containing 2 ponds, which are connected by small streams. You?ll also find teahouses and a beautiful garden lantern. 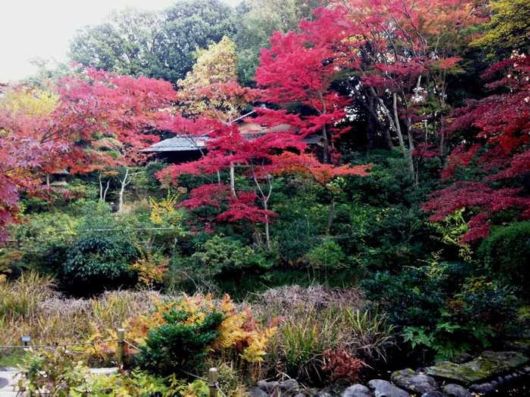 Ninna-ji is the head temple of Shingon Buddhism in Japan. It was founded in 888 C.E. by emperor Uda and is part of the historical monuments of ancient Kyoto ? a UNESCO world heritage site. 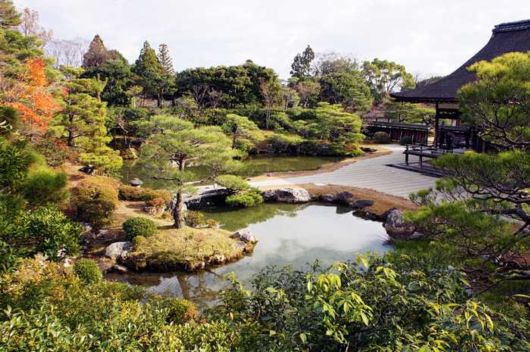 These 470-years-old gardens belong to the Reiun-in temple of Zen Buddhism. The gardens were neglected for many years until they were renovated and redesigned in 1970 by renowned Japanese artist Shigemori Mirei. 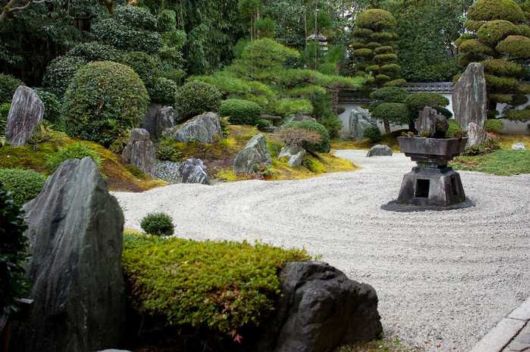 The rural town of Ohara hides this tranquil moss garden and its stone statues. The garden is part of the Sanzen-in temple, built at the end of the 10th century. 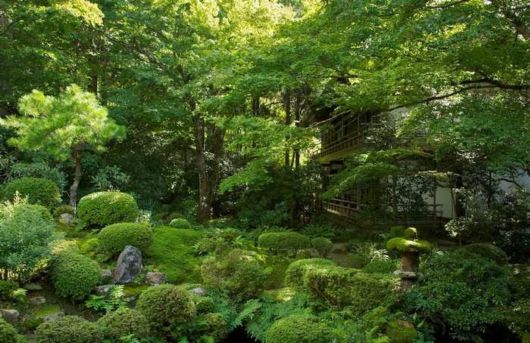 In the northern part of Kyoto, you?ll find Entsuji temple. Established in 1678 by Emperor Reigen, who had an affinity for gardens. The garden itself has over 50 species of Camellia (of which tea is made). 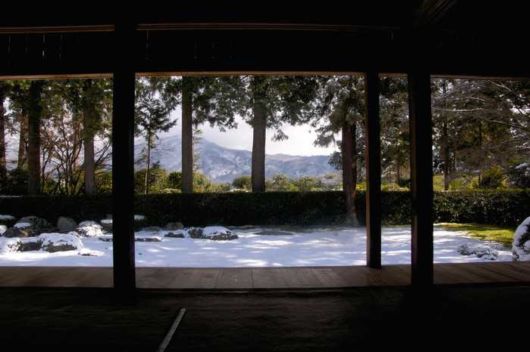 Gio-ji is a quiet temple, surrounded by trees and a lush moss garden. The temple is named after Gio, a dancer from 12th-century Japan, who fell in love with a powerful leader, but when he ended their relationship, she became a Buddhist priestess. 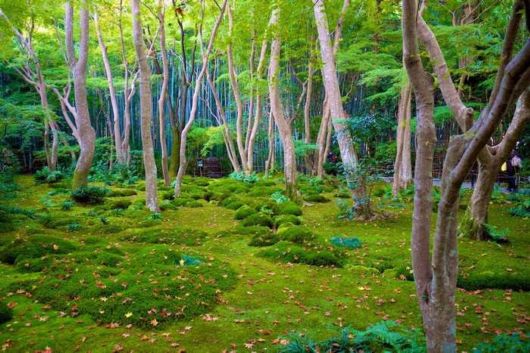 Built in the early 17th century along the hills of the Edo region. With a beautiful stream running through it, it houses many bonsai trees, most of whom are over 100 years old, with one being over 500 years old. 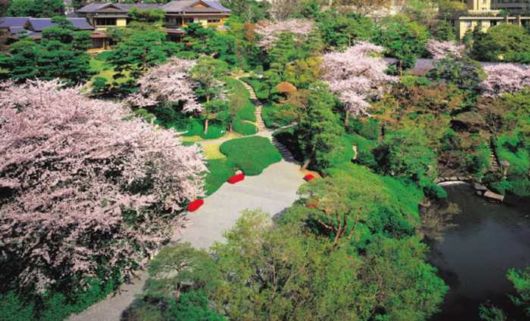 Hase-Dera is an ancient Buddhist temple, originally built in 686 C.E. in honor of emperor Temmu. The temple has been burnt and rebuilt 10 times throughout history. Nowadays, it is a favorite tourism spot, and the place is usually filled with visitors. 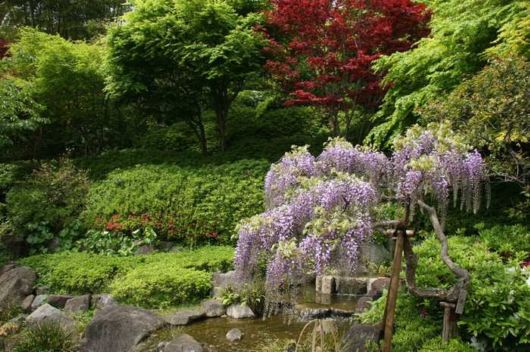 A temple of the school of Zen Buddhism, Hosen-in is one of the older temples in the region. Constructed in 1012, it houses an amazing garden, where visitors are invited to sit and contemplate while sipping on green tea provided by the monks. 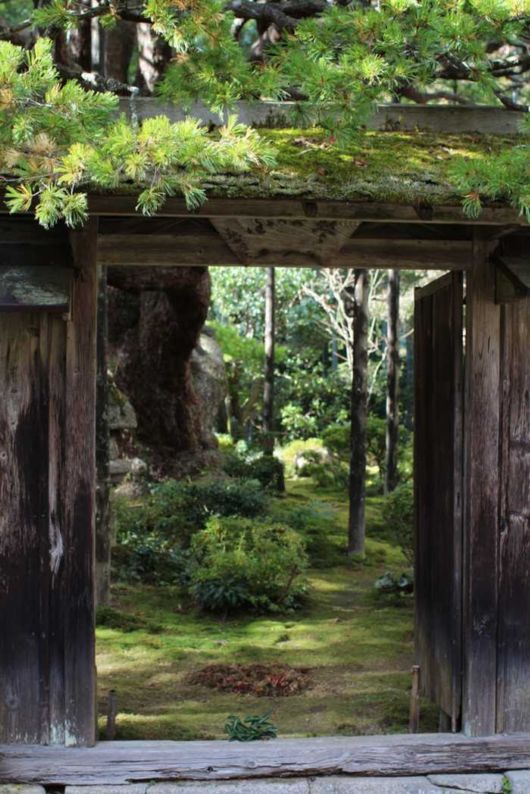 This garden belongs to the Higashi-Hongan-ji temple in Kyoto. The gardens you see in the picture were built in 1641 along with the original pond. The garden houses several Cherry trees that serve as a huge attraction in spring, when they bloom. Amazingly, this garden is located just a few meters away from the busy Kyoto station. 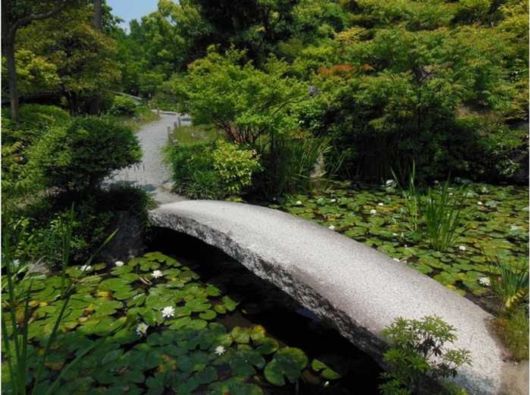 This is the newer garden of the Taizō-in temple, called yoko-en, built in 1963. The garden has several azaleas, along with a stream that cascades and flows into the pond, creating a spectacular view. 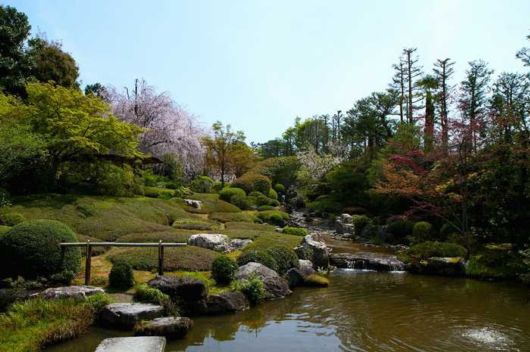 In 1341, emperor Takauji chose this spot, at the foot of Mount Kinugasa, to erect a temple on. This was the fulfillment of a vow he took while following the Zen teachings of Musō Soseki. Soseki also designed the gardens, pond and the tearoom. 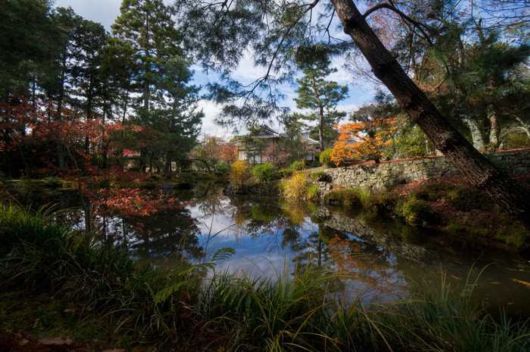 The Imperial Palace is the residence of the emperor of Japan, located in Tokyo. These breathtaking gardens are only open on the emperor?s birthday and on the first day of the new year. 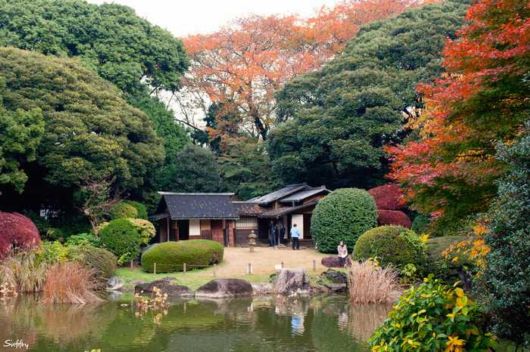 Built between 1913 and 1915, these are the gardens of the estate of Eguchi Teijo, the Vice-President of the Manchurian Railway. They were later purchased by the director of Mitsubishi, who completed it and added a teahouse. The gardens are built in the traditional Japanese style and have been purchased by the Tokyo Metropolitan Government for preservation and public enjoyment. 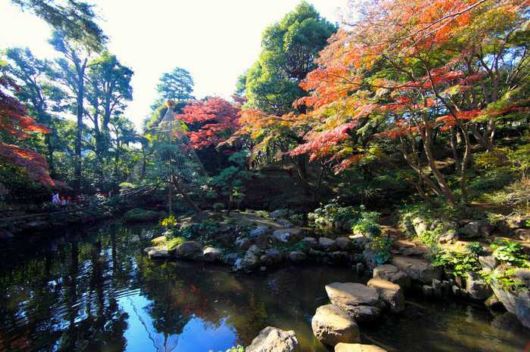