The Appian Way or Via Appia was one of the earliest and strategically most important Roman roads of the ancient republic. It connected Rome to Brindisi, Apulia, in southeast Italy. In fact, it is one of the longest and oldest roads planet and part of one of the most popular attractions in Italy. The road is laid in the time of the risk of the empire, became an integral part of its history. Appian Way and is today considered one of the wonders of Rome. The road that was built back in 312 BC, stretches for 560 kilometers from Rome to Brindisi. Such a long way was named after the famous Roman statesman Appius Claudius CC. Originally Appian Way was built for the passage of the army and of necessary supplies inhabitants of the empire, but eventually the road began to be used for other purposes. 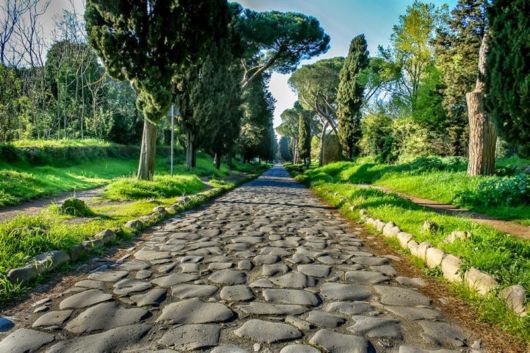 Large stones made up the bulk of its construction and a softer gravel that was compacted between the rocks cemented it. Roman roads and especially the Appian Way were extremely important to Rome. It allowed trade and access to the east, specifically Greece. The Appian Way is visible today and many significant tombs and architecture line its borders. It was this Via Appia Antica road that many events took place. It might be most famous for its role in the slave revolt lead by Spartacus in 73 B.C. After the Roman army subdued the insurrection they crucified more than 6000 slaves and lined the Appian Way for 130 miles with their bodies. 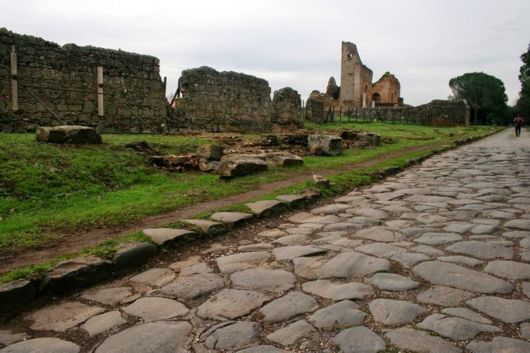 Ruins along the Appian Way.
The Appian Way is also lined with tombs of ancient patrician families of Rome. Among the tombs one will find the Christian catacombs, San Sebastian, San Domitilla, San Callixtus, and the most impressive, the tomb of Cecilia Metella. Walking along this road is rich in history and vision, a good starting place is at the gate of San Sebastiano. The Appian Way is so rich in history and significance and is really is a valuable experience. It is said to be the road in which Peter had his vision from Christ and headed back to the city of Rome to be persecuted. 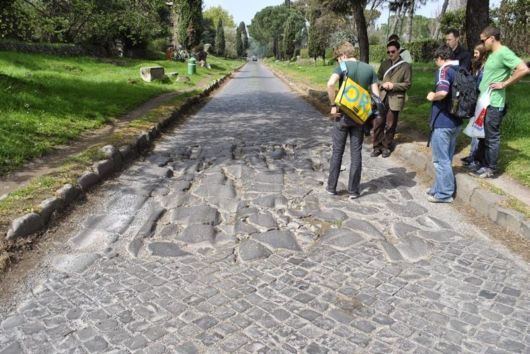 Ancient patch of Appian Way.
The part of Via Appia which is now called Via sacra (Sacred way, in the city center of Rome) begins at Capitol Hill. It passes through the Roman Forum leaving it just after the Arch of Titus. This ancient road also borders the Palatine and the Circus Maximus, as well as Caracalla’s Baths, reaching the imposing gate of St. Sebastian. The remains of aqueduct Claudius are also located nearby, and are still well preserved. 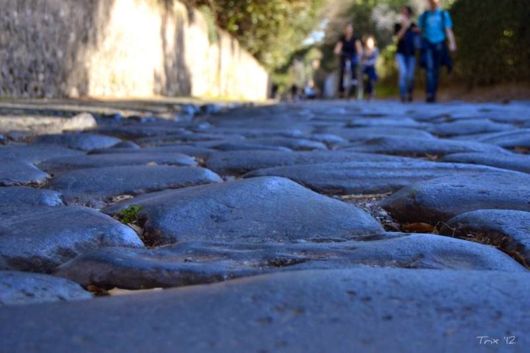 Caminando por la Via Appia Antica.
According to Roman tradition, the dead body can not be buried in the city. As a consequence, the tomb was erected on the outskirts of Rome, and many wealthy Romans lie right at the Appian Way. Their tombs near the road curious tourists can be seen today. It should be noted that the Appian Way – it’s just a terrific job for the time. Impeccably paved stones are likely to remain the same as were thousands of years ago. Argued that the roadbed laid so firmly that it will take a sharp object to remove one of the stones. Today part of the road was transformed into a park, but most of the Appian Way is still suitable for walking. 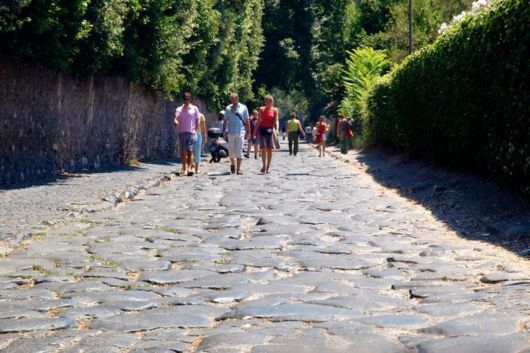 Walking along the original Appian Way. 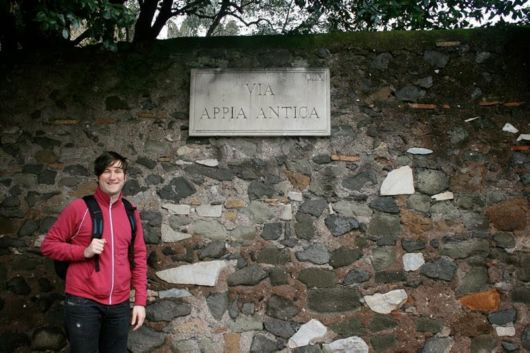 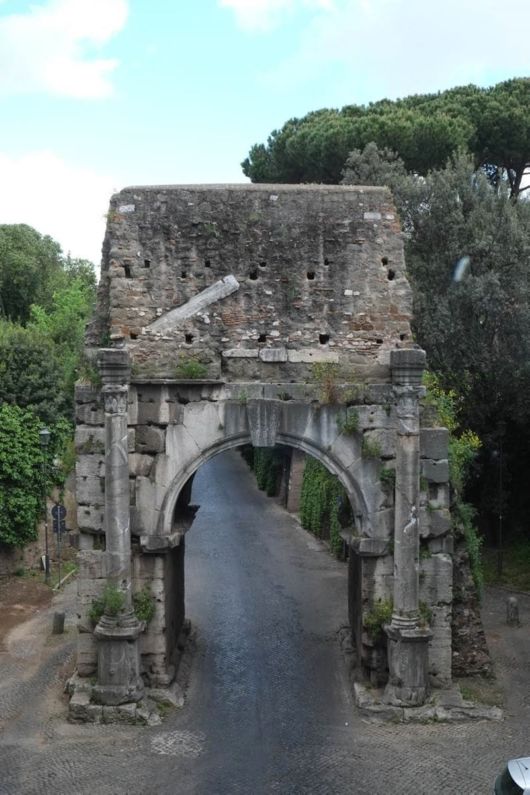 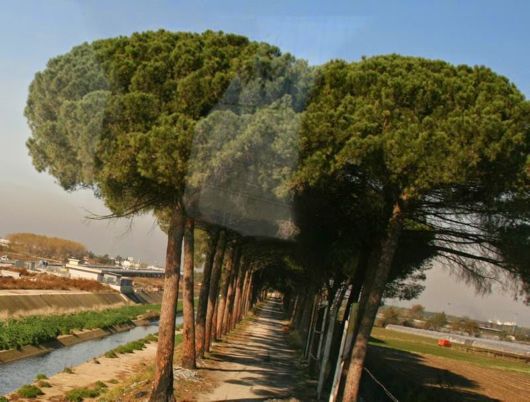 Looking down the Appian Way. 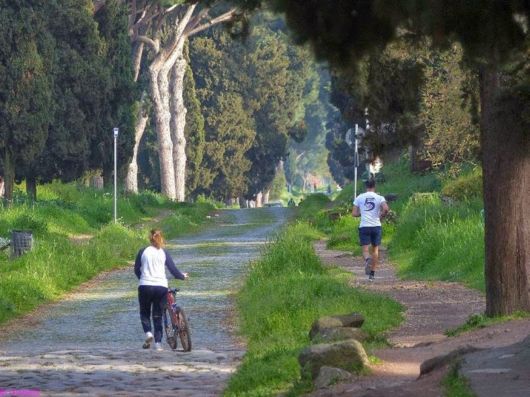 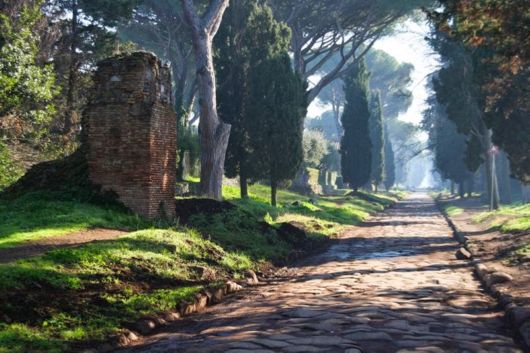 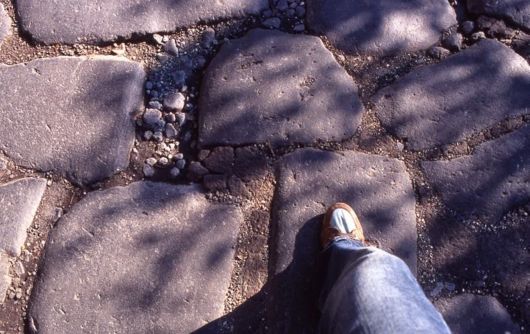