One of my favorite parts of traveling is trying out all the local foods. I look forward to sampling the local cuisine and local restaurants while trying all the flavorsome street food. Although many dishes are brought to other countries, there?s nothing better than getting the genuine dish in its home territory. Here is a list of the best street food delicacies to try when you go traveling.

This Turkish dish features a wrap made from flatbread, grilled crispy and filled with meat cooked on a vertical spit. Sometimes you will find vendors who offer chicken, beef or veal, but lamb is the typical filling. The wrap is topped with tomatoes, onions, cucumbers, lettuce, herb yogurt and hot sauce. This dish is also highly popular in Germany, but Istanbul is the ideal city to experience this tasty treat. 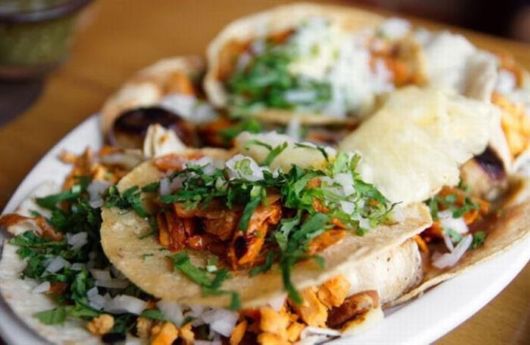 This is a true marriage of two food cultures: Lebanese immigrants introduced the tradition of split roasting meats and the tender meat began being served on the local Mexican tortilla. Typically the meat, usually pork, is marinated in dried chilies, spices, and pineapple. The tortillas are served with onions and cilantro and topped with salsa or lime juice. 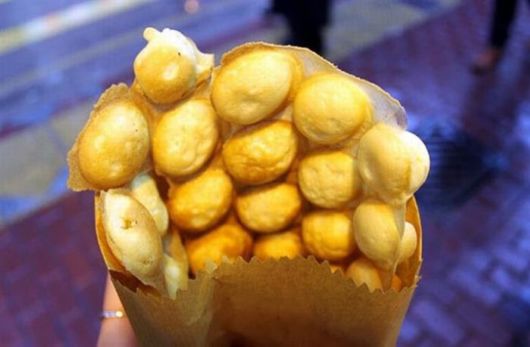 Called gai daan jai in Cantonese, this popular Hong Kong invented dish first appeared on the streets in the 1950s. An eggy batter is cooked between two metal plates of semi-spherical cells over a flame, giving the snack its unique form. Egg waffle is best enjoyed hot off the griddle and plain, although some vendors do add chocolate or fruit and mix the batter with green tea or ginger flavoring. 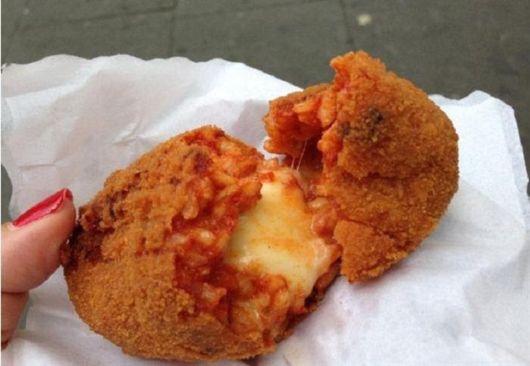 This finger food is native to Rome and is named after the Italian word for ‘surprise’, because of the unexpected mozzarella filled center. This Italian deep fried rice ball is combined with ragù, ground beef, and tomatoes. Older recipes used to use chicken giblets. This popular city croquette can also be found in pizza parlors and grocery stores, where it is served as an antipasto. 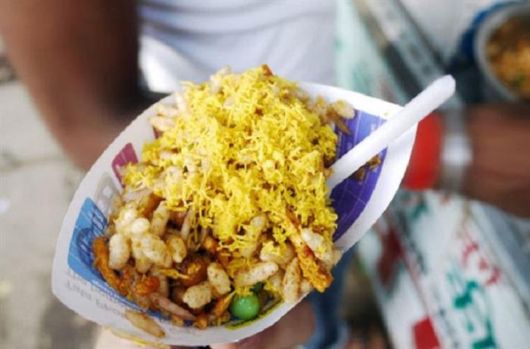 In India, a street snack is known as aschaat and while Bhel Puri is found all over the vast country, this dish is best tasted in Mumbai. The recipe includes a mix of puffed rice, vegetable, spices, chutneys, and semi-fried, vermicelli-like noodles. This flavorsome dish tastes sweet, salty, tangy and spicy all at the same time.
Currywurst in Berlin 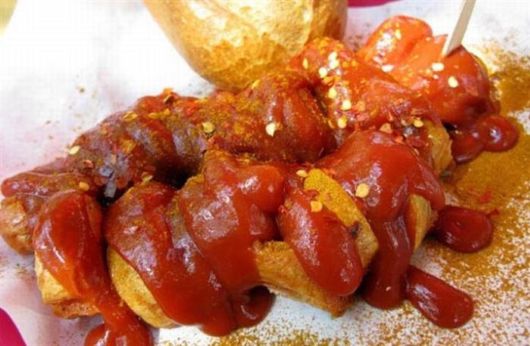 It’s hard to believe that this iconic German dish was only invented in 1949. 800 million currywursts are consumed annually across Germany and the dish is particularly popular in Hamburg and Berlin. This hearty street food features a steamed-then-fried pork sausage with ketchup and curry, served with bread or french fries. 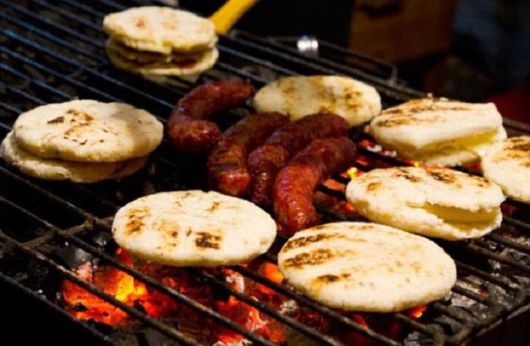 This popular flatbread is made from maize or flour and can be grilled, baked or fried. In neighboring Venezuela, the bread is used for sandwiches, while in Colombia arepas are topped with butter, cheese, eggs, condensed milk, chorizo, or hogao, an onion sauce. If you want to feel like a local Bogotano, eat a plain arepa with a cup of hot chocolate for breakfast. 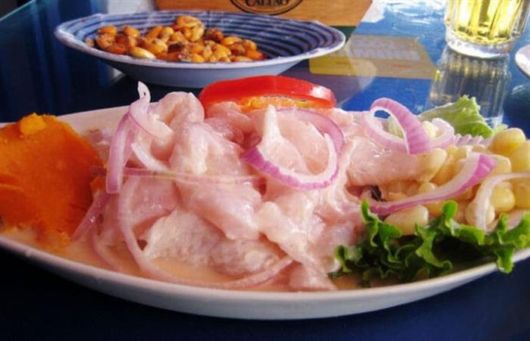 This fresh seafood appetizer is Peru’s national dish. Peruvian’s even hold a holiday in its honor. The recipe consists of chunks of raw sea bass, or sole, marinated in lemon juice and topped with onions and chili peppers. This dish is best served as soon as it?s prepared. It is commonly served with sweet potato, lettuce, corn or avocado. 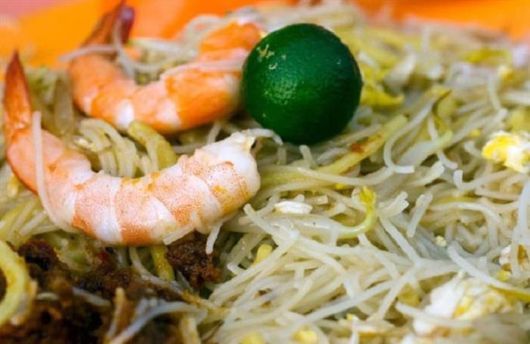 Among Singapore’s vibrant street food culture, Hokkien Mee stands out as a winner. This dish was created by Chinese sailors from Fujian Province after the Second World War. The rice and egg noodle dish is stir-fried with pork, egg, shrimp, squid, garlic, bean sprouts and soy sauce and is often garnished with lime and chili sauce. In the past pieces of lard were drizzled on the top, but this tradition was abandoned for health reasons. 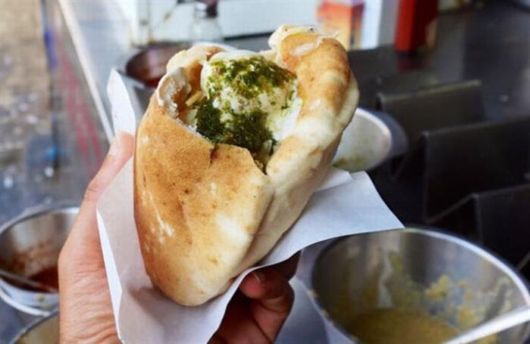 This delicious street food is Israel’s unofficial national dish. The origins of this food remain unknown and many neighboring nations claim it as theirs too, this dish is best enjoyed in Israel. The locals enjoy the deep-fried chickpea balls served in a pita, topped with salad, pickled vegetables, tahini, hummus and hot sauce. 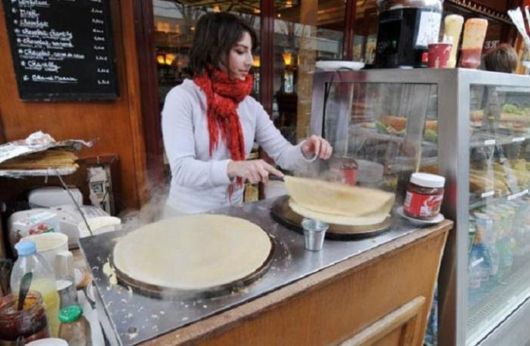 This much-loved street dish is an iconic Parisian scene. Head to Montparnasse, an area overflowing with crêpe stands. During dinner and lunch, you can enjoy a savory crêpe, typically made with buckwheat flour and filled with ham and cheese. Other savory versions include vegetables, eggs, and other meats. For dessert or breakfast, sweet crêpes are served, made with wheat flour and sugar. The sweeter crêpes are filled with fruit preserves, custards or even Nutella. 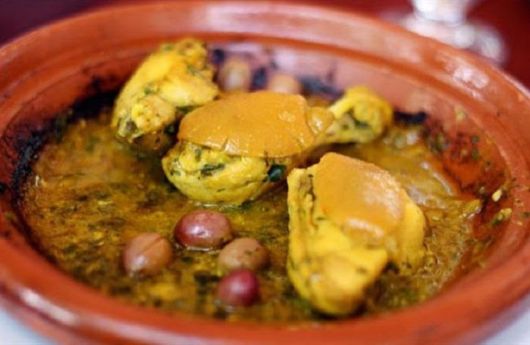 This Berber stew is named after the earthware pot it?s cooked in. The dish is slowly cooked over hot coals for hours and enjoys many variations. It usually features lamb, beef or chicken, vegetables and plenty of spices and herbs. Many locals add fruit and nuts and it is served with couscous or bread. You can find this dish offered in fine Moroccan restaurants, but it’s best enjoyed served in a simple setting. 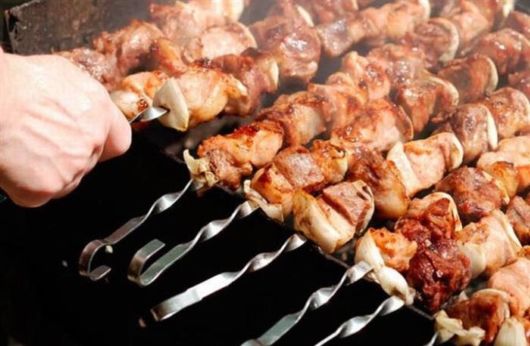 These "little skewers", cooked over small charcoal grills, are found all over Brazil. Popular meats are spiced beef and chicken, but anything can be put on the skewer such as sausages, shrimp, cubes of fish or quieijo coalho, a non-melting cheese. Vendors often serve the skewers with hot sauce and farinha, a crunchy flour that can be sprinkled on the meat. 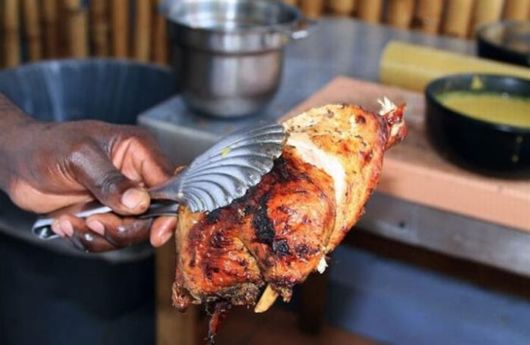 Well known outside of the Caribbean, jerk chicken is best on its home island. While the marinating jerk sauce is easy to replicate, the real secret is in its grilling. The Jamaicans grill the chicken over charcoal, for a unique smoky flavor. The meat is also cooked directly on top of fresh green wood logs, so that it absorbs the woody oils and fragrances, adding to the aromatic flavor.

Halo-Halo in the Philippines 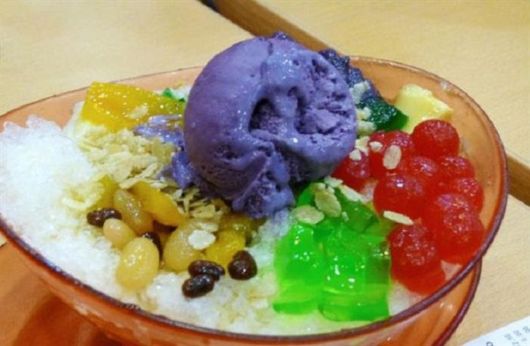 This dessert sounds wacky when you look at the ingredients, but locals are mad for this sundae. Shaved ice and evaporated milk are the base of this dessert, but you also might find a mix of kidney beans, chickpeas, sugar palm fruit, coconut, caramelized plantains, jackfruit, tapioca, sweet potato, crushed rice, flan and ice cream in this surprising dish.