South Africa is one of the most overlooked countries in the world, when it comes to travel destinations. There are many amazing sites to see and fun things to do throughout the country. You can hike along the Table Mountain in Cape Town, explore the incredible Cango Caves in Swartberg, or simply admire the sunset going down over a beach somewhere. It’s no wonder South Africa has been hailed as "the adventure capital of the world!" Enjoy the bonus video of South Africa at the end! 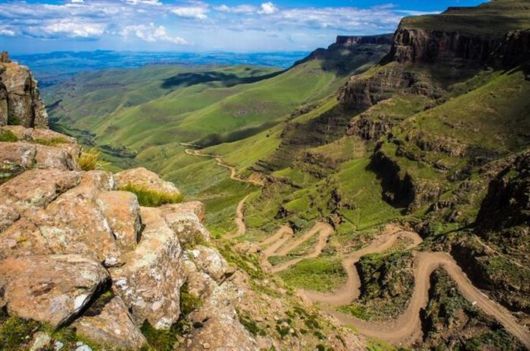 This stunning landscape trail provides the only route over the Drakensberg escarpment into the Kingdom of Lesotho. The enormous rocky trail is known as the Roof of Africa, since it stands approximately 9,426 feet or 2,873 meters above sea level. It’s suggested to travel up the rocky hills with a 4×4 vehicle.
2) Table Mountain 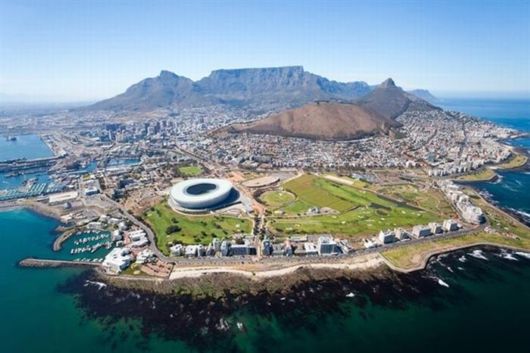 Table Mountain gets its name from its flat top shape. The historical mountains are one of the most visited places in world, and attracts many tourists each year. The recognizable South African mountain stands at 1,085 feet or 3,560 meters. There is a cable car that will take you to the top of the mountain in 5 minutes. 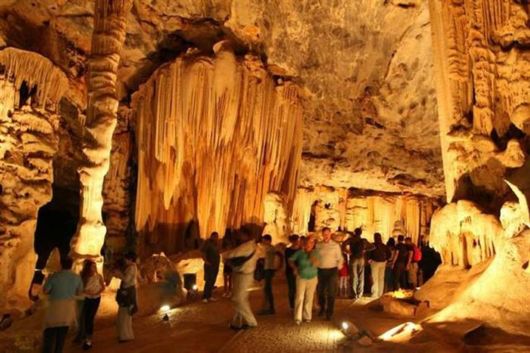 The spacious Cango Caves is located in the Swartberg Mountains, near the town of Oudtshoorn. The prehistoric caves date back nearly 20 million years. There are even hidden chambers deep inside the limestone rock layers! There are tours offered for the insides of the caves, suitable for geology lovers or adventure seekers. 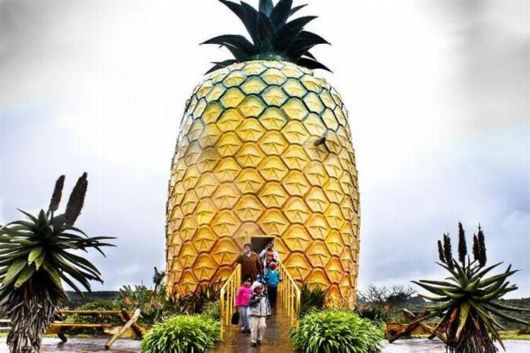 This giant pineapple shaped dome is based in the Eastern Cape town of Bathurst. The 55 foot or (16.7 meter) dome, is actually an auditorium made from fiber-glass and metallic structuring. The dome is famous for featuring documentaries on the pineapple industries. What else did you expect! 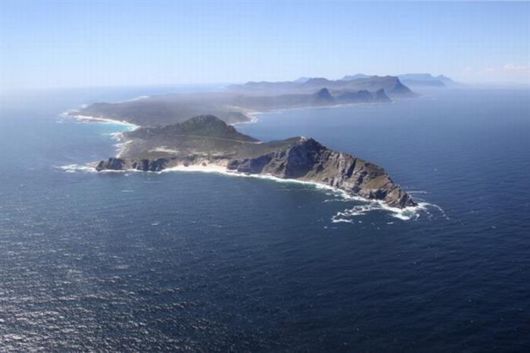 Cape Point Nature Reserve can be found high above the wide Cape Peninsula. It’s notable for having a lighthouse that dates back to 1859. You can elevate to the top of the cape within three minutes, via a railway ride, known as the Flying Dutchman Funicular. Needless to say, the view from atop is spectacular! 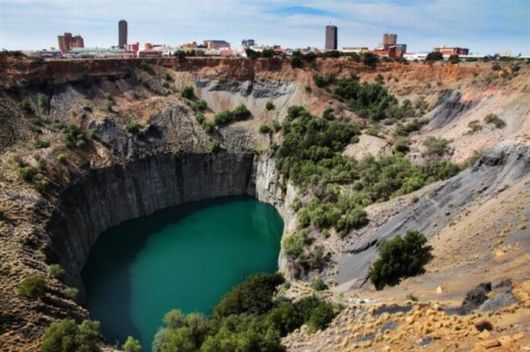 The Big Hole, also referred to as Kimberley Mine, was rumored to be the largest hole excavated in South Africa. The hole itself is approximately 2,625 feet or 800 meters wide. The one-time diamond mines actually contained over 2.7 tons (2,249 kg) of diamonds at one point, before officially closing in 1914. The Big Hole Museum is a very popular tourist attraction today. 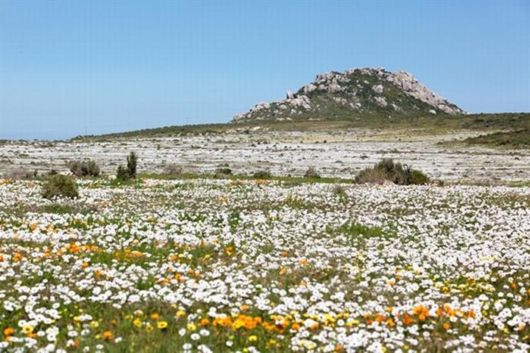 This stunning flower route can be found just five hours north of Cape Town. There are several reserves located along the Namaqualand Flower Route, which includes the Goegap Nature Reserve, Richtersveld National Park, and Skilpad Wild Flower Reserve. The flower route is an ideal setting for family picnics and scenic hikes along the trails. 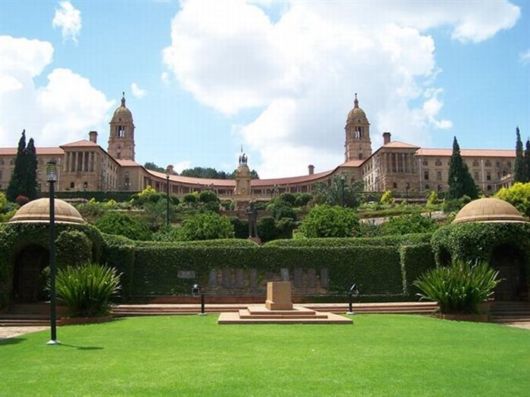 The iconic buildings play host to the South African government and president. The Union Buildings are located in the city of Pretoria. Nelson Mandela was sworn in as president in 1994, breaking the color barrier at the time. You won’t be able to go inside the legendary buildings, but you can certainly admire them from the beautiful gardens outside.

9) The Palace of the Lost City 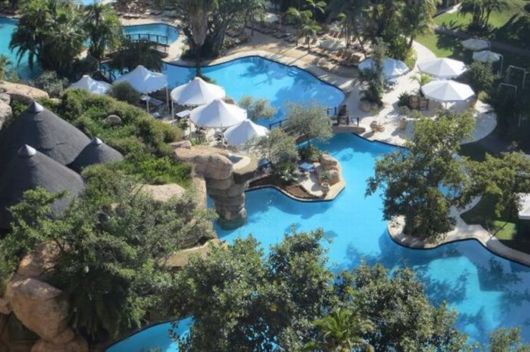 This luxurious vacation resort can be found in the heart of Sun City. The Palace was inspired by a long lost African tribe, and even features furniture made out of golden zebra hide! The resort has everything you could possibly ask for, including a first class restaurant, a safari and several casinos. This is truly the dream vacation for travelers!
10) Augrabies Falls 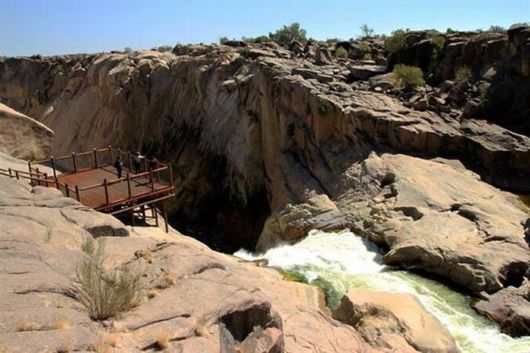 The thundering sounds of the Augrabies Falls crashes directly into the Orange River below. The name of the waterfall translates into "place of big noises", and stands at 183 feet (56 meters). A diverse spectrum of wildlife can be seen along the breathtaking waterfall. Nature lovers will simply adore the Augrabies Falls. 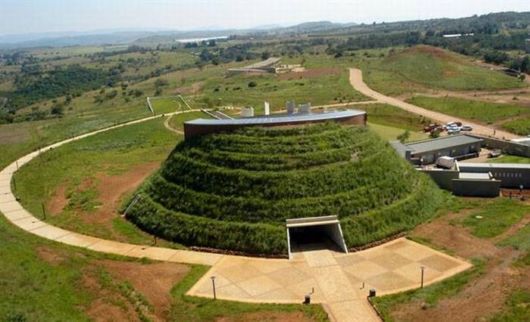 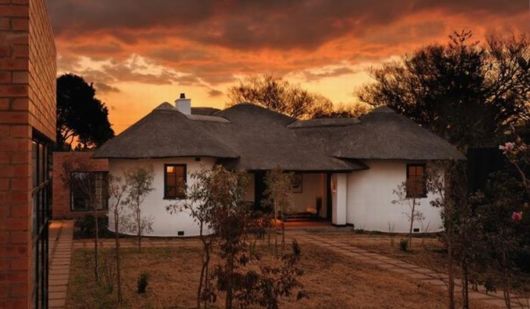 Mahatma Gandhi was a resident of this iconic house between 1908-1909. It was at Satyagraha House where Gandhi first began his successful crusade for India’s independence from the British Empire. The Satyagraha House serves as a museum today, and can be found in the city of Johannesburg. 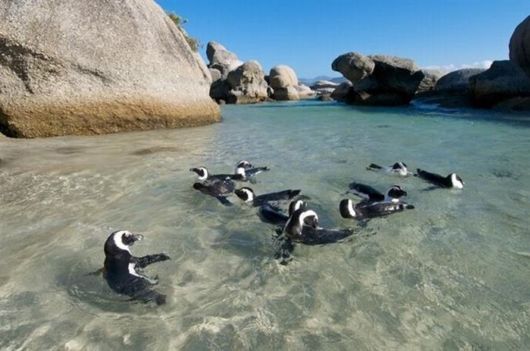 If you thought that penguins only lived in the arctic territories, you may want to think again! Boulders Beach is located in False Bay, which is near Cape Town, and is home to nearly 3,000 African penguins. The Foxy Beach boardwalk gives you a better glimpse of the cute little penguins. Boulders Beach is a perfect place to bring the kids.
14) St Lucia Estuary 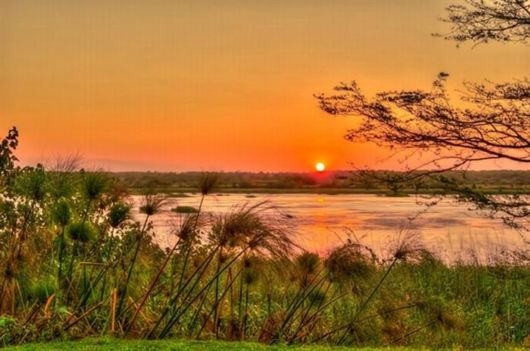 St Lucia Estuary is a settlement located in the KwaZulu-Natal province. The estuary is home to about 1,200 Nile Crocodiles and almost 800 Hippopotami. You can either admire the exotic animals, go horseback riding along the iSimangaliso Wetland Park trails, or go for a scenic kayaking trip along the estuary. 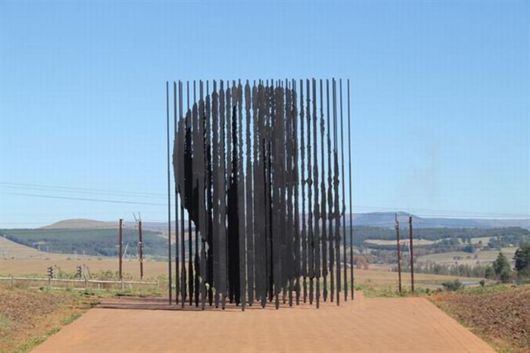 This iconic South African sculpture of Nelson Mandela was constructed out of 50 steel poles, and appears as an optical illusion from afar. The steel pole sculpture plays a vital role in South African history, and can be found in the province of KwaZulu-Natal. 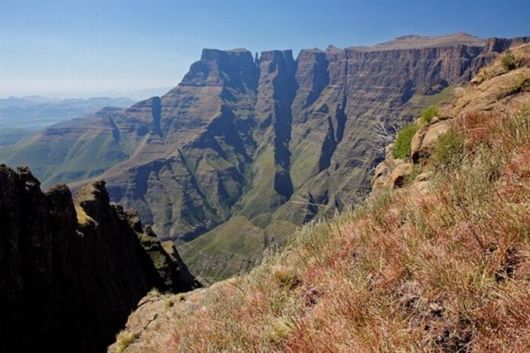 The Drakensberg Mountains are located along the Great Escarpment, which borders the central South African plateaus. Thabana Ntlenyana is the highest peak of the Drakensberg. It stands tall at over 11,424 feet or 3,482 meters. The name translates into the Dragon Mountains in Afrikaans.
17) Spirit Of the Emakhosini 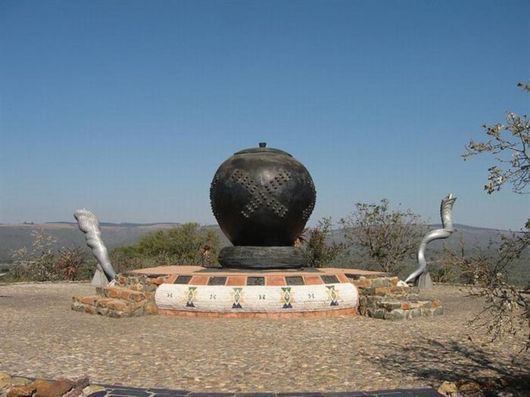 The bronze beer pot monument plays a significant role in tribal Zulu culture. The seven gigantic horns represent each of the seven kings buried in the legendary valley. The 18 bronze reliefs surrounding the monument symbolize Zulu life. The monument can be found along the Valley of the Kings, in Thabazimbi. 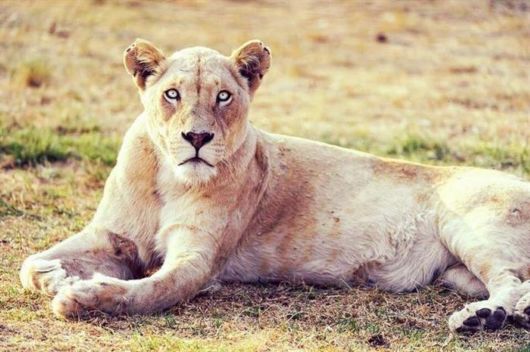 This famous lion sanctuary is situated in the heart of Johannesburg, and features many endangered species. The park is home to some of the rarest lions on the planet. Lion Park first opened its doors in 1966 by the Chipperfield Circus, and remains a popular attraction among tourists. 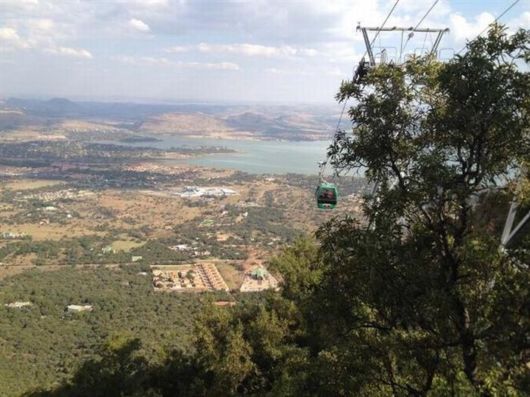 The aerial cableway offers some of the most breathtaking panoramic views of Hartbeespoort Dam and Magaliesberg Mountain range. The Hartbeespoort Aerial Cableway is the largest mono-cableway in Africa. The long trip to the top is simply magnificent, just as long as you don’t have a fear of heights! 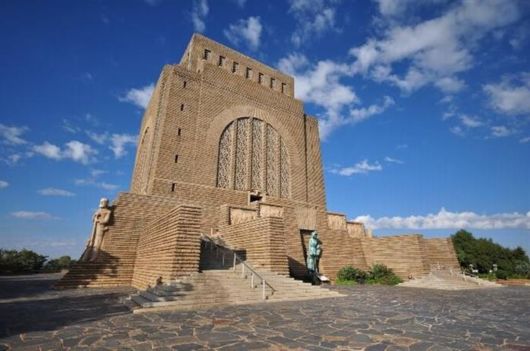 The enormeous Voortrekker Monument is can be found along the capital of Pretoria on Monument Hill. The enormous monument was constructed strictly out of granite as tribute to the Voortrekker pioneers and stands 40 meters or 131 feet. The monument was designed by South African architect, Gerard Moerdijk, and listed as a National Heritage Site. 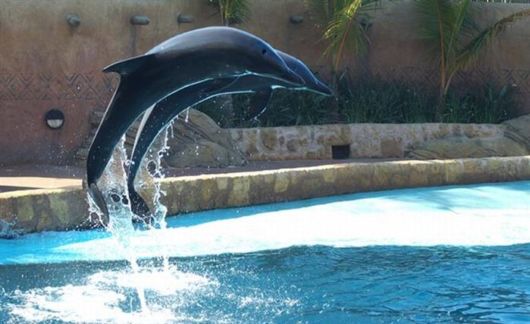 The uShaka Marine World is located in the KwaZulu-Natal city of Durban. The theme park features the uShaka Wet’n Wild water park, the uShaka Village Walk, and the uShaka Beach. The tremendous marine theme park is a family friendly experience that everyone can enjoy!

When it comes to picturesque landscape surroundings, very few can compete with the Blyde River Canyon. The spacious canyon also happens to be the third largest canyon on Earth, and can be found in the Mpumalanga province. The main feature is God’s Window, which stands 2,297 feet or 700 meters. Once you see the views, you’ll understand where the heavenly name came from!

23) Valley of a Thousand Hills 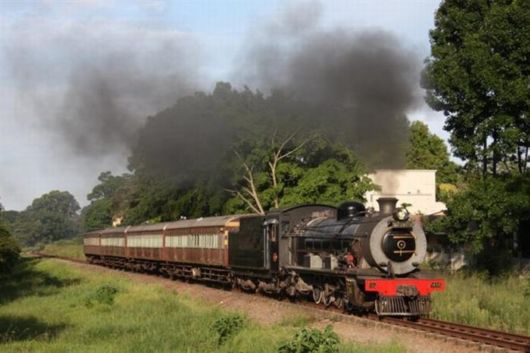 The Vally of a Thousand Kings lies between the cities of Durban and Pietermaritzburg. The valley also intersects the Umgeni River and the Msunduzi River. The Thousand Hills Choo Choo steam train will transport you from Kloof Station all the way across the Cato Ridge. The kids will truly love riding inside the loud steam engine train. 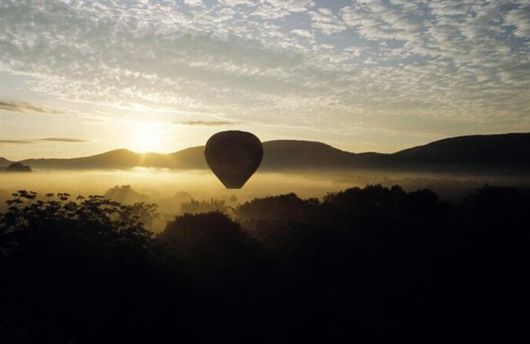 Are you looking for a more adventurous way to explore the safaris of South Africa? Treat yourself to a hot air balloon ride overlooking the Cradle of Mankind, the Hartbeespoort Dam, and the Magalies River Valley. The stunning views above the mountains alone are worth the trip! 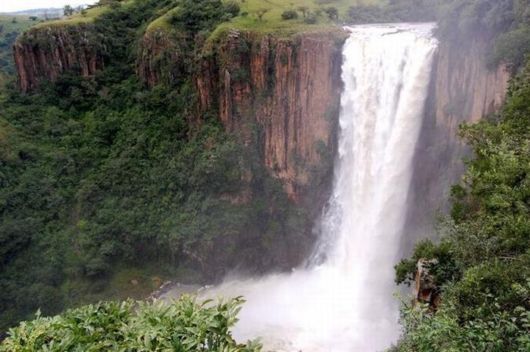