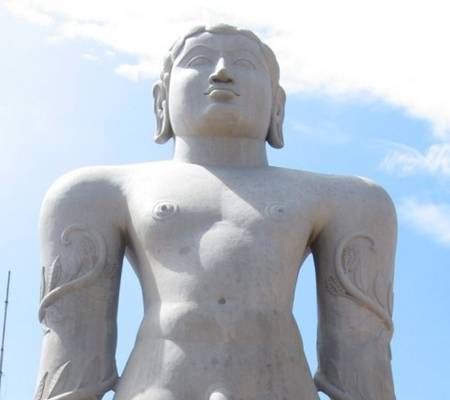 The 17.8 m monolith of Jain prophet Bhagavan Gomateshwara Bahubali, which was carved out around 983 C.E and is located in Shravanabelagola, India, is anointed with saffron every 12 years by thousands of devotees as part of the Mahamastakabhisheka festival. The colossal monolithic statue of Gomateshwara (Shravanabelagola is a synonymous word), also called as Bahubali the Jain saint, created around 983 C.E by Chamundaraya, a minister of the Ganga King, Rachamalla (Raachmalla SathyaVaak IV 975-986 C.E) is located atop the Chandragiri hill (618 steps climb leads to the monolith on the hill), near the town of Shravanabelagola in Karnataka state. This statue is said to have been carved out of a single block of fine-grained white granite and is considered of great religious significance because Jains believe Bahubali was the first to attain moksha (freedom from cycle of birth and death). The image stands on a lotus. It has no support up to the thighs and is 60 feet (18 m) tall with the face measuring 6.5 feet (2.0 m). The statue is completely in the nude, in the Jain custom and is visible from a distance of 30 km.With the serene expression on the face of the image, its curled hair with graceful locks, its proportional anatomy, the monolith size, and the combination of its artistry and craftsmanship have led it to be called the mightiest achievement in sculptural art in medieval Karnataka. It is the largest monolithic statue in the world.
The neighbouring areas of Shravanabelagola, apart from the Gomateshwara statue, have Jaina bastis and several images of the Jaina Thirthankaras. A beautiful view of the surrounding areas could be seen from the top of the Chandragiri hill. Every 12 years, thousands of devotees congregate here to perform the Mahamastakabhisheka, a spectacular ceremony in which the thousand-year-old statue is anointed with milk, curds, ghee, saffron and gold coins. The anointing last took place in February 2006, and the next ceremony will occur in 2018. 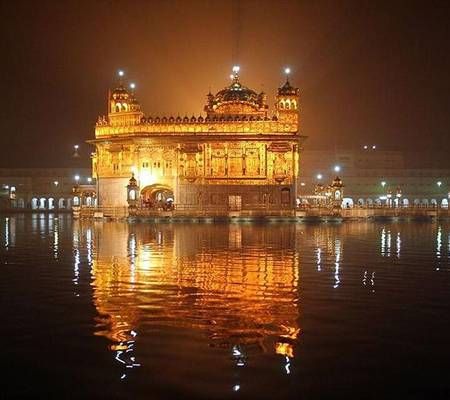 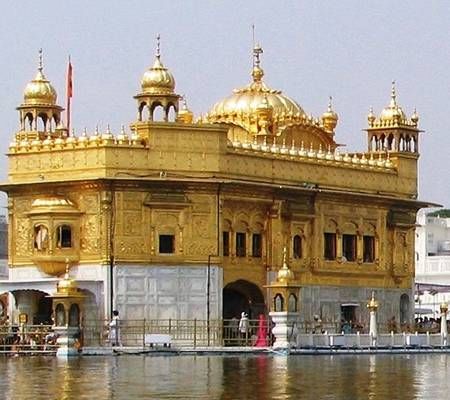 The Harmandir Sahib (Punjabi) or Darbar Sahib, informally referred to as the Golden Temple or Temple of God, is culturally the most significant shrine of the Sikhs and one of the oldest Sikh Gurudwara. It is located in the city of Amritsar, which was established by Guru Ram Das, the fourth guru of the Sikhs and the city that it was built in, is also due to the shrine known as Amritsar.
The fourth Guru of Sikhism, Guru Ram Das, excavated a tank in 1577 C.E which subsequently became known as Amritsar or Amrit Sarovar (meaning: Pool of the Nectar of Immortality), giving its name to the city that grew around it. In due course, a splendid Sikh edifice, Harmandir Sahib (meaning: The abode of God) [6], rose in the middle of this tank and became the supreme centre of Sikhism. Its sanctum houses the Adi Granth, compiled by Guru Arjun Dev, comprising compositions of Sikh Gurus and other saints considered to have Sikh values and philosophies e.g. Baba Farid, Kabir, etc. . Devotees, for whom the temple is a symbol of freedom and spiritual independence, come here from all over the world to enjoy its environs and offer their prayers. The Golden Temple sits on a rectangular platform, surrounded by a pool of water called the Amrit Sarovar. The temple building has four entrances instead of the usual single entry. This is symbolic of the openness of Sikhism and indicates that followers of all faiths are allowed inside. The walls within are decorated with carved wooden panels and elaborate inlay work in silver and gold. The Adi Granth, rests on a throne beneath a jewel-encrusted canopy. Priests conduct continuous recitation of verses from the holy book.

03. Taj Mahal
Taj Mahal, built in the memory of the queen Mumtaz Mahal 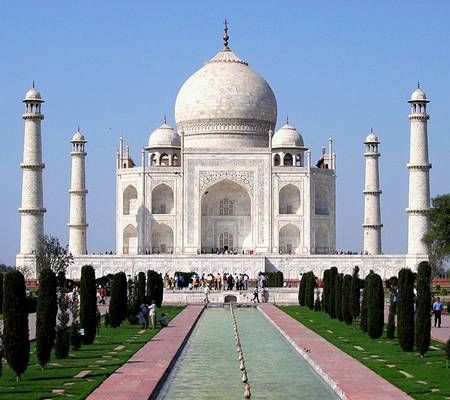 Taj Mahal (also "the Taj"), the pinnacle of Mughal architecture, * Archeological Survey of India description was built by the Mughal emperor Shah Jahan in memory of his queen Mumtaz Mahal. It is considered the finest example of Mughal architecture, a style that combines elements from Persian, Turkish, Indian, and Islamic architectural styles. In 1983, the Taj Mahal became a UNESCO World Heritage Site and was cited as "the jewel of Muslim art in India and one of the universally admired masterpieces of the world’s heritage." It is an integrated symmetric complex of structures that was completed around 1648. Ustad Ahmad Lahauri is generally considered to be the principal designer of the Taj Mahal.
The focus of the Taj Mahal is the white marble tomb, which stands on a square plinth consisting of a symmetrical building with an iwan, an arch-shaped doorway, topped by a large dome. Like most Mughal tombs, basic elements are Persian in origin. The base structure is a large, multi-chambered structure. The base is essentially a cube with chamfered edges and is roughly 55 meters on each side (see floor plan, right). On the long sides, a massive pishtaq, or vaulted archway, frames the iwan with a similar arch-shaped balcony. On either side of the main arch, additional pishtaqs are stacked above and below. This motif of stacked pishtaqs is replicated on chamfered corner areas as well. The design is completely symmetrical on all sides of the building. Four minarets, one at each corner of the plinth, facing the chamfered corners, frame the tomb. The main chamber houses the false sarcophagi of Mumtaz Mahal and Shah Jahan; their actual graves are at a lower level. The exterior decorations of the Taj Mahal are among the finest to be found in Mughal architecture. The calligraphy found are of florid thuluth script, created by Persian calligrapher Amanat Khan.
Masons, stonecutters, inlayers, carvers, painters, calligraphers, dome-builders and other artisans were requisitioned from the whole of the empire and also from Central Asia and Iran to build the monument. While bricks for internal constructions were locally prepared, white marble for external use in veneering work was obtained from Makrana in Rajasthan. Semi-precious stones for inlay ornamentation were brought from distant regions of India, Ceylon (SriLanka) and Afghanistan. Red sandstone of different tints was requisitioned from the neighbouring quarries of Sikri, Dholpur. It took 17 years for the Taj to be built. 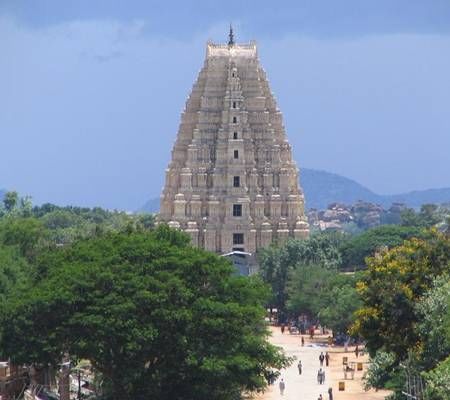 The 14th century ruins nestle within them with almost every highlight of classical Indian architecture. Palaces, temples, marketplaces, watch towers, stables, baths and monoliths lie scattered amidst huge boulders, which complement the rugged look and historic feel of the place. 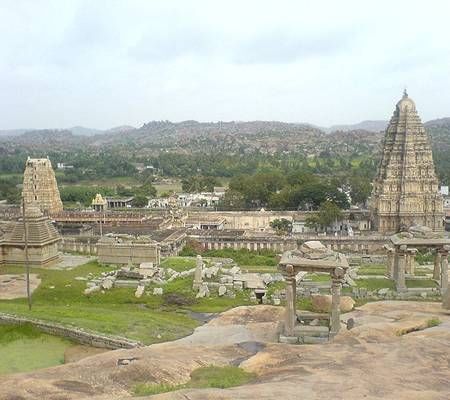 Ruins of Hampi – UNESCO World Heritage Site, presents the Vijayanagara architecture, a vibrant combination of the Chalukya, Hoysala, Pandya Chola styles, idioms that prospered in previous centuries. It Hampi was the last capital of the Vijayanagar Empire, which was admired by the travellers between the 14th and 16th centuries. But it was pillaged and abandoned by the Muslim confederacy which conquered the Decann in 1565 C.E. Palaces, temples, marketplaces, watch towers, stables, baths and monoliths lie scattered amidst huge boulders, which complement the rugged look and historic feel of the place.
Its legacy of sculpture, architecture and painting influenced the development of the arts long after the empire came to an end. Its stylistic hallmark is the ornate pillared Kalyanamantapa (marriage hall), Vasanthamantapa (open pillared halls) and the Rajagopura (tower). While the empire’s monuments are spread over the whole of Southern India, nothing surpasses the vast open air theatre of monuments at its capital at Vijayanagara. 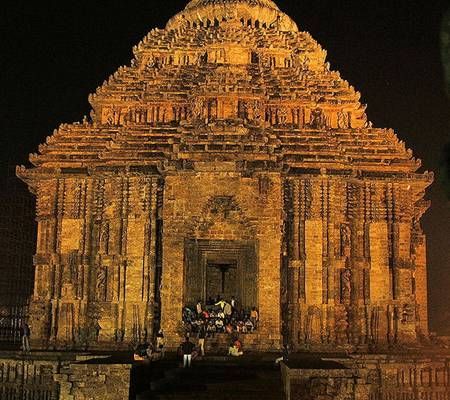 Konark Sun temple (also known as the Black Pagoda), was built in black granite by King Narasimhadeva I (1236 C.E-1264 C.E) of the Eastern Ganga Dynasty. The temple is a UNESCO-World Heritage Site. Built in the 13th century, the temple is designed in the shape of a colossal chariot with 24 wheels (3.3 m dia diameter each) drawn by seven horses and, carrying the Sun god, Surya, across the heavens.It is a stunning monument of religious (Brahmanical) architecture. The Sun temple belongs to the Kalinga School of Indian Temples with characteristic curvilinear towers mounted by cupolas and is aligned in the east-west direction as it is dedicated to Sun, which sun lits the entrance. The temple plan depicts three segments, viz., Natmandir (the outer complex), Jagmohan (the central complex) and Garbhagriha (the main complex housing the Deity). The main sanctum which (69.8 m. high) was constructed along with the audience hall (39.5 m. high) having elaborate external projections. The main sanctum which enshrined the presiding deity has fallen off. The Audience Hall survives in its entirely, but only small portions of the Dancing Hall (nata Mandir) and the Dining Hall (Bhoga-Mandap) have survived the vagaries of time. The Temple compound measures The Temple compound measures 857 ft (261 m) by 540 ft (160 m). 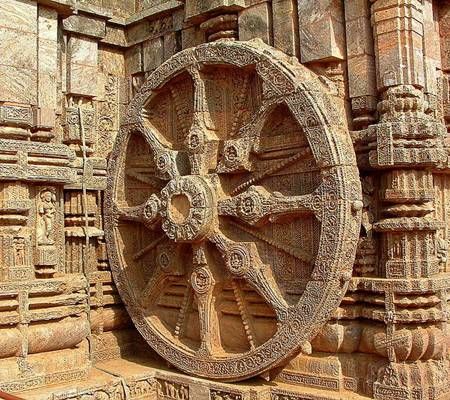 The entrance to the temple is guarded by two lions, each shown crushing a war elephant. Each elephant in turn is shown on top of a human body. At the entrance, there is also a Nata Mandir or dance hall where the temple dancers used to perform dances in homage to the Sun god. All around the temple, there are various floral and geometric patterns. There are also human, divine and semi-divine figures in sensuous poses. The poses contains couples in various amorous postures, and are derived from the Kama [email protected]

06. Nalanda
The stupa of Sariputta at Nalanda. 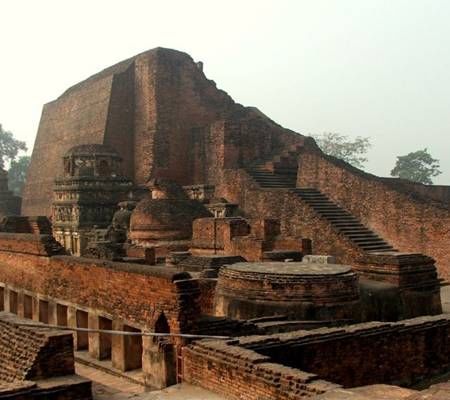 The Nalanda, located in the Indian State of Bihar, was a Buddhist center of learning from 427 C.E to 1197 C.E partly under the Pala Empire. It has been called "one of the first great universities in recorded history." According to historical studies the University of Nalanda was established 450 C.E under the patronage of the Gupta emperors, notably Kumaragupta. Nalanda, considered as the world’s first residential university, had dormitories for students and had accommodated over 10,000 students and 2,000 teachers. The university was considered an architectural masterpiece, and was marked by a lofty wall and one gate. Nalanda had eight separate compounds and ten temples, along with many other meditation halls and classrooms. On the grounds were lakes and parks. The library was located in a nine storied building where meticulous copies of texts were produced. The subjects taught at Nalanda University covered every field of learning, and it attracted pupils and scholars from Korea, Japan, China, Tibet, Indonesia, Persia and Turkey. The Tang Dynasty Chinese pilgrim Xuanzang left detailed accounts of the university in the 7th century. 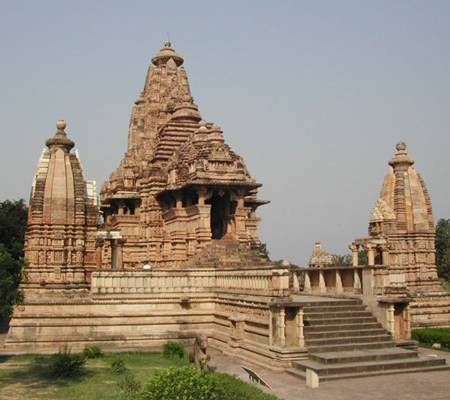 Lakshmana temple at Khajuraho, a panchayatana temple.Khajuraho Temple, India
Khajuraho has the largest group of medieval (between 950 C.E and 1050 C.E) temples of Hindu and Jain religion. There is perfect fusion of architecture and sculpture at this temple complex, famous for their erotic sculpture. The temples are a UNESCO world Heritage Site. At the Temple of Kandariya, there is a profusion of decorated sculptures considered as one of the greatest masterpieces of Indian art. Built by Chandela dynasty, the temples exhibit stunningly explicit sexual sculptures which were created by the artist’s imagination of lovemaking positions prevalent at that time, or based on the rules outlined in the Kamasutra. Many of the sculptors have claimed artistic ownership on many sculptures. Built of sandstone in varying shades of buff, pink or pale yellow, most of the temples belong to the Shiva, Vaishnava or Jaina religious Sects, which are difficult to differentiate from one another. The temples, sited in an East-West direction, depicts a plan with spacious layout with interior rooms inter connected. An entrance, a hall, a vestibule and a sanctum are part the common layout plan of the temples. It is stated that the Khajuraho temples are a celebration of womankind, her innumerable moods and facets which are witnessed by the carvings of a woman writing letter, applying makeup to her eyes, combing her tresses, dancing, and playing with her child. Also etched, sculpted with consummate skill are innocent, coquettish, smiling, seductive, passionate and beautiful and erotic sculptures depicted in intricate detail. It is also opined that the Chandelas followed the Tantric cult with the faith that gratification of earthly desires is a step towards attaining Nirvana, the infinite liberation. 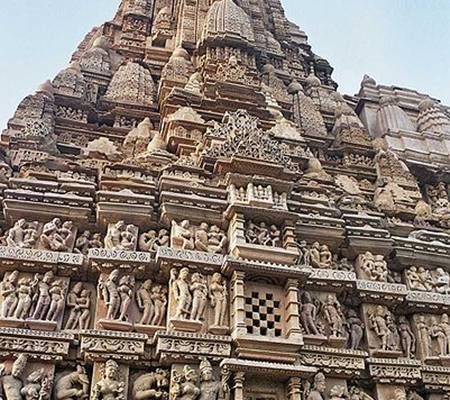