Tsaatan people are reindeer herders and live in northern Khövsgöl Aimag of Mongolia. Originally from across the border in what is now the Tuva Republic of Russia, the Tsaatan are one of the last groups of nomadic reindeer herders in the world. They survived for thousands of years inhabiting the remotest subarctic Ulaan taïga, moving between 5 and 10 times a year.

The reindeer and the Tsaatan people are dependent on one another. Some Tsaatan say that if the reindeers disappear, so too will their culture. Reindeers provide them with milk, cheese, meat, and transportation. They also sew their clothes with reindeer hair, reindeer dung fuels their stoves and antlers are used to make tools. They do not use their animals for meat. This makes their group unique among reindeer-herding communities.

As the reindeer populations shrink, only about 40 families continue the tradition today. Their existence is threatened by the dwindling number of their domesticated reindeers. Many have swapped their nomadic life for urban areas. In June 2014, after days spent horse-riding across the Ulaan taïga from the village of Tsagaan-Nuur, near Khövsgöl lake, we had the chance to meet them.
More info: parcheminsdailleurs.com 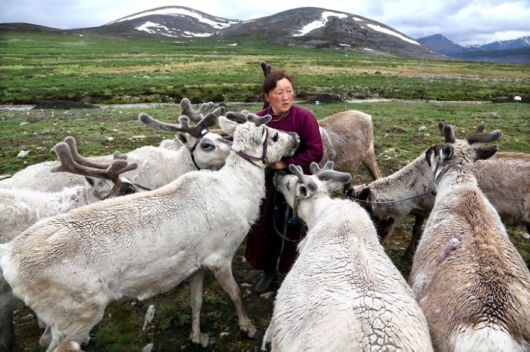 A residential group consisting of several families is called ?olal-lal? (meaning ?them? in the Tsaatan language). They usually refer to a specific group by the name of a representative member.

The sense of their community is structured around the reindeer, they are dependent on one another. Tsaatans say that if the reindeer disappear, so too will their culture 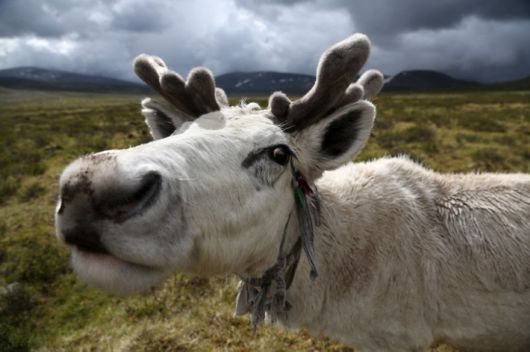 Reindeer pelts are used for making winter coats. Bags, mats for travelling, and shoes are also made from the skin. Material for shoes is taken from the skin on the reindeer?s shin. Reindeer antlers are ingredients in traditional Chinese medicine and have been supplied to China since 1975. 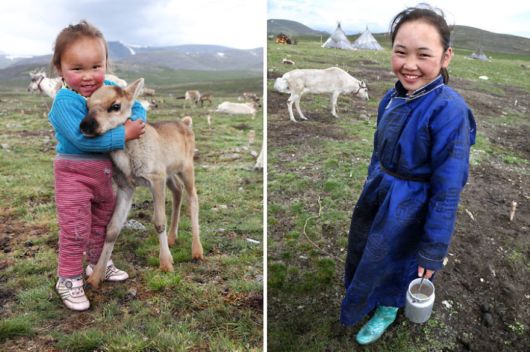 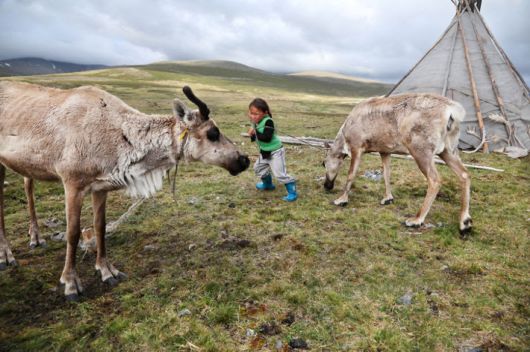 The reindeer are domesticated and belong to the household. The community?s chores and activities are centred around the care and feeding of their reindeer. Herding tasks are shared amongst the camp with children at a young age learning to care for the reindeer and keeping them safe. 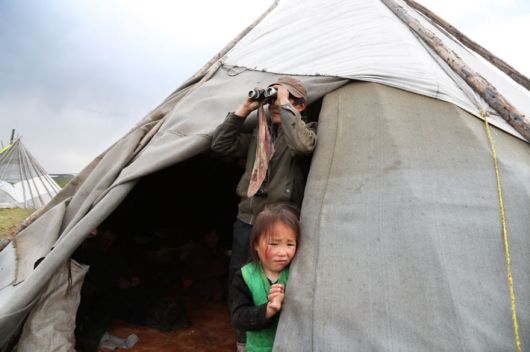 Families of the same olal-lal set up tents close to one another and collaborate in livestock herding. We visited the Tsaatan people at the end of June, when they had settled at their summer spot. Its altitude is around 2300 m.
Inside the Tsaatan tent 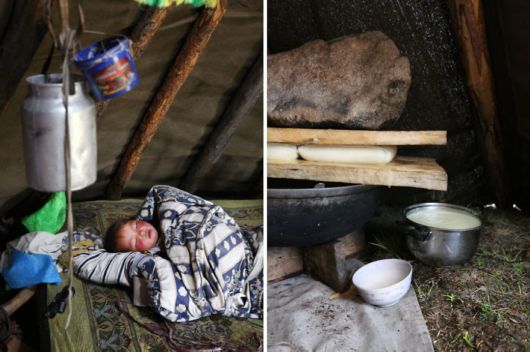 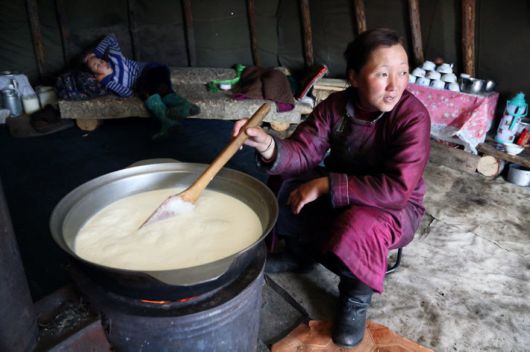 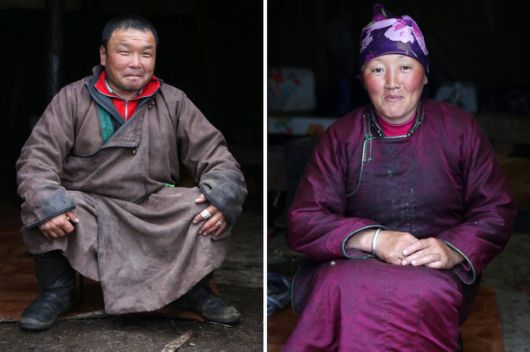 Full family posing proudly with some of their reindeer 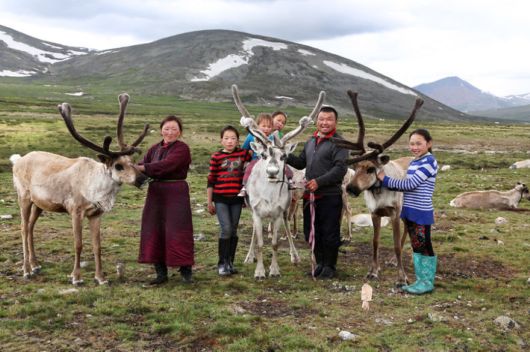 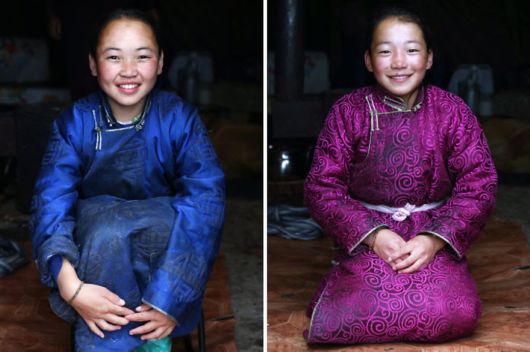 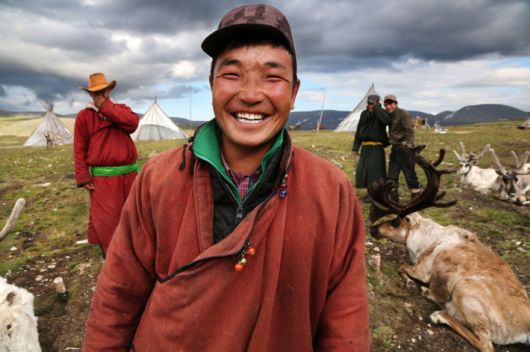 Every evening, more than 100 reindeer return to the camp after a long day walking through the Ulaan taïga to find some food 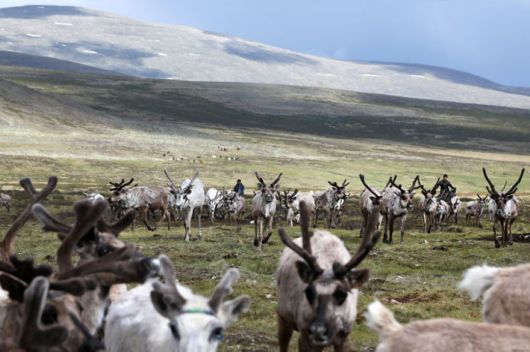 These were so unforgettable moments to see them coming back, every night, as a gracious army on the horizon, with their antlers dancing in the air.
Tsaatan selfie in the Ulaan taïga with Bayrsaïhan 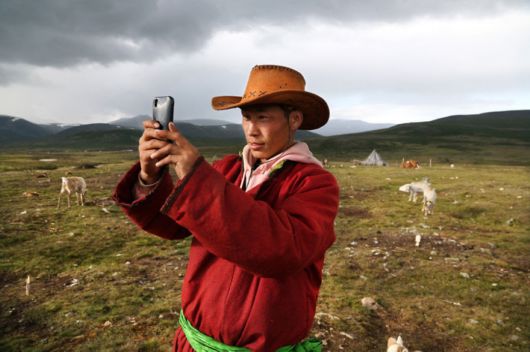 Cutting wood for the daily needs 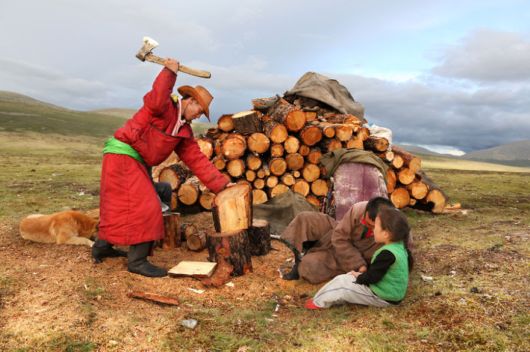 Tuvshinbayar is playing with the reindeer 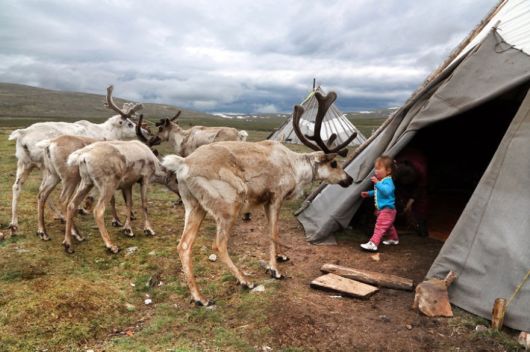 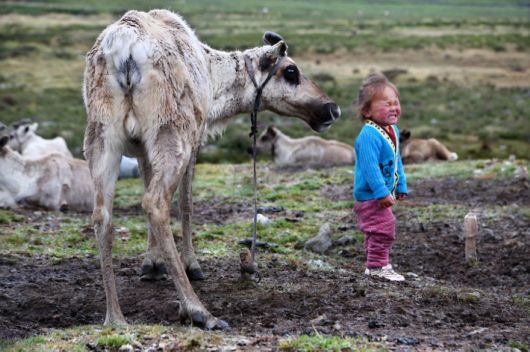 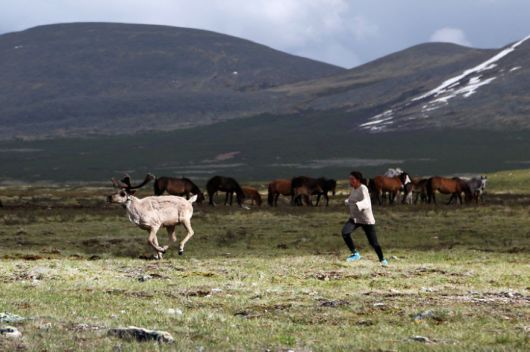 The girls and younger women do the milking and make yoghurt, cheese, and milk tea 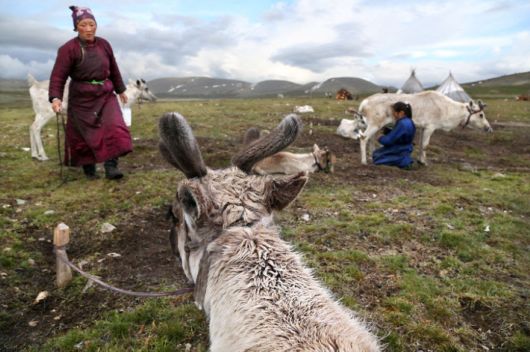 Narahuu?s aunt is offering us a bowl of Suutei tsai, the traditional salty milk tea 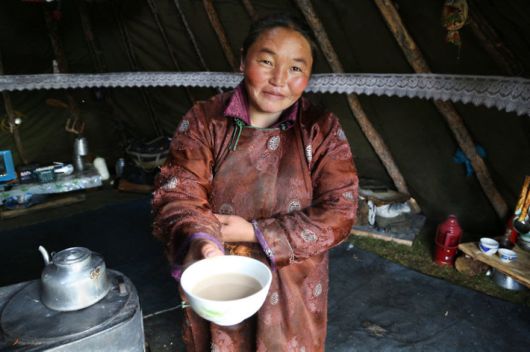 Ulziichimig, the youngest daughter of the family, is about to wake and tease her sister 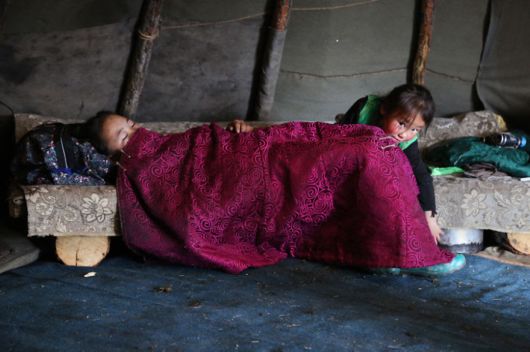 Sunset over the Ulaan Taïga 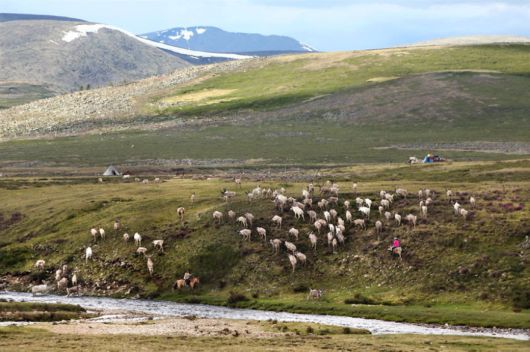 Because of the cold climate throughout the year, open grasslands spread across the high steppe. Reindeer cannot handle the heat well, so they must be pastured in high plains in the summer.

Tsaatan people believe that their ancestors? ghosts live on in the forest as animals that give guidance to the living, so they practice Shamanism, a religion based on nature worship 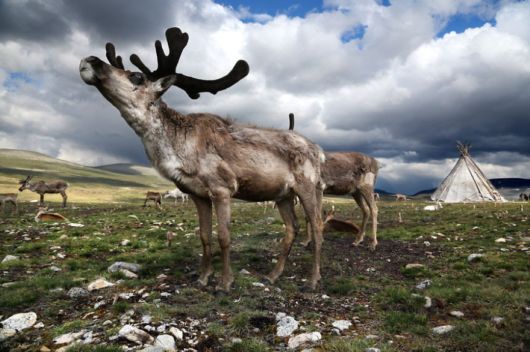 The Shamanistic practices among Tsaatans differ from those of other Shamanistic religions in the region. Shaman worship among the Tsaatan people is thought to represent the oldest variant of Shamanism practiced by Mongolian nomads. Not only do they worship their Shaman, but they have many mystical holy books as well, and use many different treatises in their daily lives, including those for hunting and for calling or banishing the rain.

Baagii wearing the Tsaatan traditional dress which is characterized by hats like those of the Khalkh people, and wide deels (traditional Mongolian overcoats) 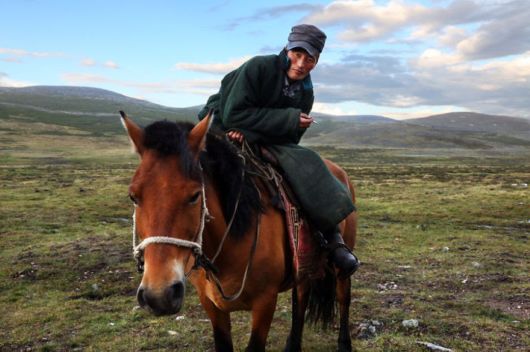 They wear strong, warm boots fashioned from the hides and sinew of their reindeer. These boots are known for their quality of workmanship and are very expensive to purchase.
Sunset on the camp 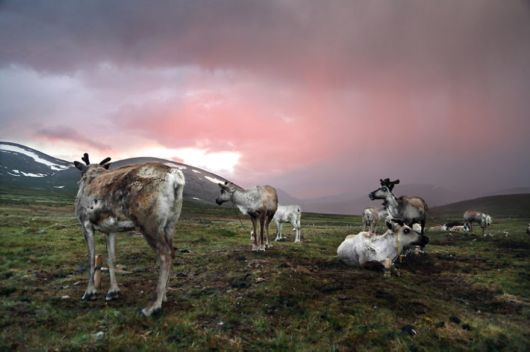