Capsule Hotel, Netherlands: a hotel made out of a survival pod 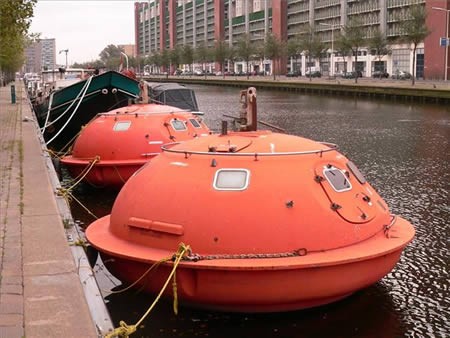 Your own survival pod! Escape pod hotel in a city centre dock location. Moored in The Hague , your room is a bright orange survival pod which once saw service on an oil rig platform. Originally built in 1972 they are 4.25 metres in diameter and unaltered apart from the addition of a lock on the outside and an ?emergency’ chemical toilet inside. While not everyone’s luxury choice, each pod provides cosy protection from the elements for up to three occupants.

First created for accommodation as an art project in 2004, owner Denis Oudendijk has 8 different models ready for use and is currently working on additional locations in central Amsterdam and Nantes , France .

Everland, Paris: a hotel which parks in unusual places with amazing views

Everland is a hotel with only one room including a bathroom, a king-size bed and a lounge. What makes it so different is that – because it is also an art installation – this hotel travels! The Everland has been ?parked’ in the most unsual places, like the roof-deck of the Museum of Contemporary Art in Leipzig, Germany, or the roof of Palais de Tokyo (with a spectacular view on the Eiffel Tower) in Paris. 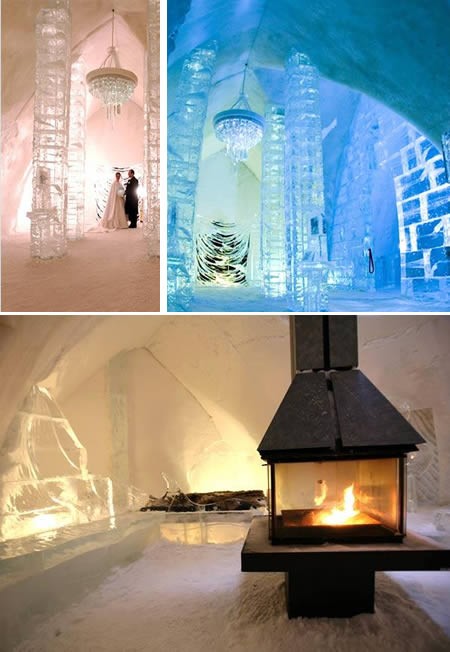 Made entirely of ice and snow, this unique one-story structure has been rebuilt each year since 2000. The 9th season of the Ice Hotel lasted from January 4th through March 29th 2009. The Ice Hotel has become an unparalleled and world-famous winter experience. It takes 5 weeks, 500 tons of ice, and 15,000 tons of snow to craft the Ice Hotel with its ceilings as high as 18 feet, walls covered with original artwork and furniture carved from ice blocks. 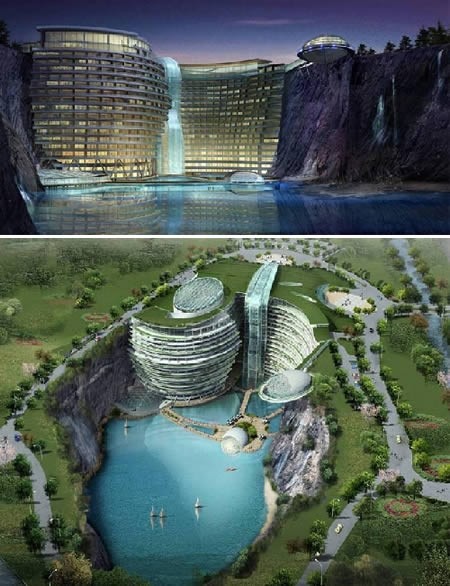 Atkin’s Architecture Group won first prize for an international design competition with this stunning entry. Set in a spectacular water filled quarry in Songjiang , China , the 400 bed resort hotel is uniquely constructed within the natural elements of the quarry. Underwater public areas and guest rooms add to the uniqueness, but the resort also boasts cafes, restaurants and sporting facilities.

Sala Silvergruva, Sweden: a single room hotel inside a silver mine 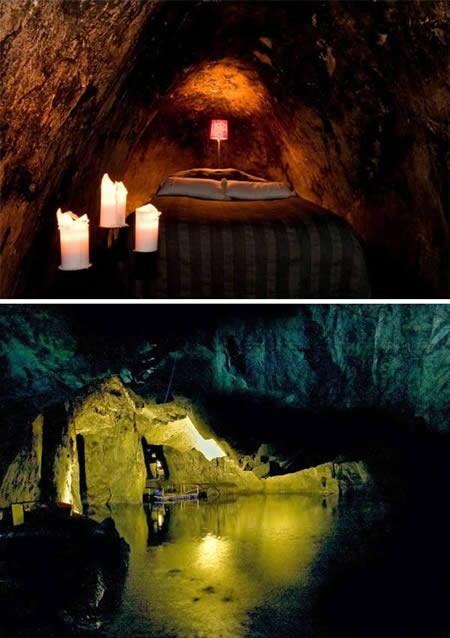 Picture this A single suite, 155m underground in historic Sala Silvermine, one of the world’s best preserved mine settings. (During its heyday, production amounted to more than 3 tons of silver a year and a total of more than 400 tons of silver and about 40,000 tons of lead were extracted – completely by hand!) If you wake up in the middle of the night and have to use the bathroom, make sure you turn right or else you’ll end up exploring dark winding galleries, vast caverns and magic lakes.

Das Park Hotel, Austria: a hotel where rooms are made of concrete pipes 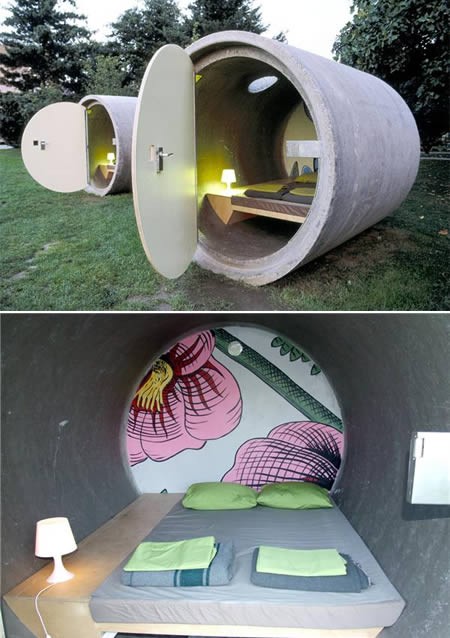 A hotel with rooms made of giant concrete sewage pipes might sound a little odd, but this artistic creation can be recreated to provide cheap lodging anywhere. These 9,5 tonne concrete sections are a standard item in near all concrete factories and the oden floors, a really comfortable double bed, minibar and room service through to 1am. For night owls, the reception is open 24hrs. With the amazing view below there is little else needed, except if you’re staying in bed past 10am, when pajamas would be a wise thing to wear, as although you can look out – tourists can look in

The De Vrouwe van Stavoren Hotel in the Netherlands salvaged four wine casks from Switzerland and converted them into rooms. Formerly filled with 14,500 liters of Beaujolais wine from the French chateau, each now holds a modest two-person room with standard amenities and even an attached bathroom and a sitting room.

The one thing that might bother you, if you’re not a wine enthusiast, is the smell of wine that the barrels still maintain. All in all the Barrel Hotel, in Stavoren, northern Netherlands , makes for a very pleasurable experience. General rates for a cask room are from 74-119 Euros a night with discounts of up to 75% off depending on season. If you go in the wintertime, a wine cask room can be as low as 18 Euros a night, cheaper than most hostels.

Giraffe Manor , Kenya : a hotel where you dine with a friendly giraffe 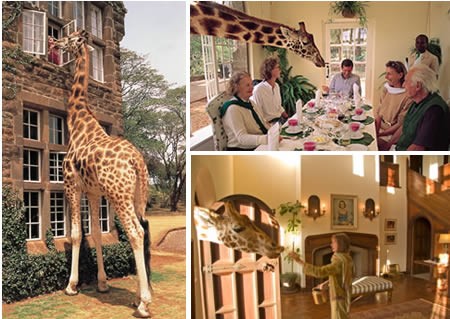 This small and exclusive hotel — surrounded by 140 acres of indigenous forest just outside Nairobi — is famous for its resident herd of giraffe. It’s the only place in the world where you can enjoy the experience of feeding and photographing the giraffe over the breakfast table, at the front door or while you dine, and the giraffes poke their heads through the window.

As well as the giraffe, the property is also home to many species of birds, large families of warthogs and the elusive Bush Buck.

Hotel Im Wasserturm , Germany : a hotel inside a water tower 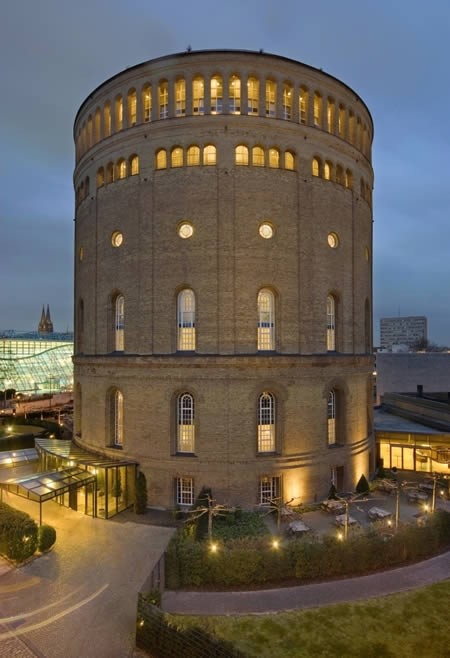 Rising high above Cologne , this international luxury hotel was once the largest water tower in 19th century Europe . In 1990, French designer Andrée Putman transformed it into an elegant 78-room hotel.

Classified as a heritage site, the timeless modern design still manages to preserve the water-tower architecture and a sense of refuge and protection. 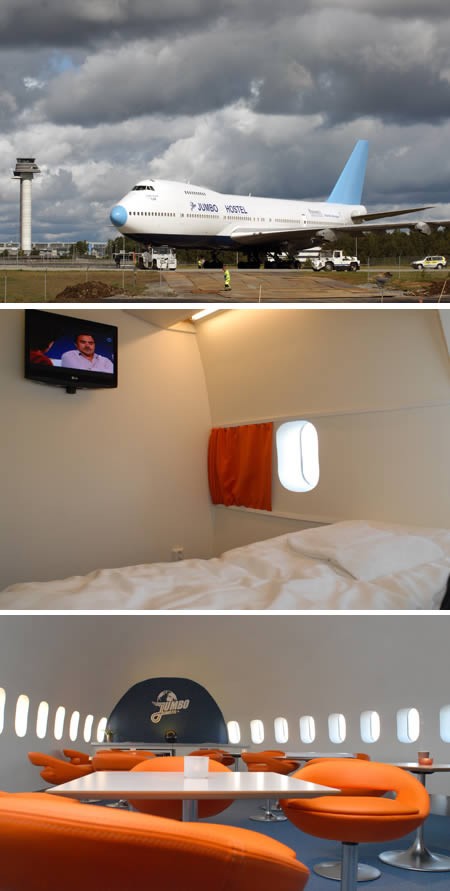 Stockholm is the house of this wacky hotel, the first aircraft inn. An abandoned Boeing 747 jumbo jet has been saved from being trashed metal to become a 25-room hotel sited in Stockholm-Arlanda airport. Each room is bare 65 square ft big and furnished with bunk beds, overhead luggage storage and flat-screen TVs. There is a reception area and a cafe with toilets and showers at the rear of the aircraft, which means that you will have to share! The upper deck is a conference room and the best of all, the cockpit, is where the wedding suite is housed. Not a very comfy hotel I would think, but staying there just to get a feel of it might be cool.