Abandoned places, especially when it comes to cities, towns, factories or mills, have always attracted the attention of many curious adventurers. Ask why? Quite simply, we can see what will happen to the world if all people suddenly disappear. Imagine that you are standing in the middle of the street, that seems quite normal, with houses, sidewalks and parks. But, surprisingly, not a soul around you. This situation is reminiscent of the film "I Am Legend," starring Will Smith. Ghost towns look very scary, but at the same time attracted by its mysterious and enigmatic. It is worth noting that in the U.S., Europe and Asia, ghost towns are not such a rarity. So, get acquainted with the most mysterious places of our vast planet. 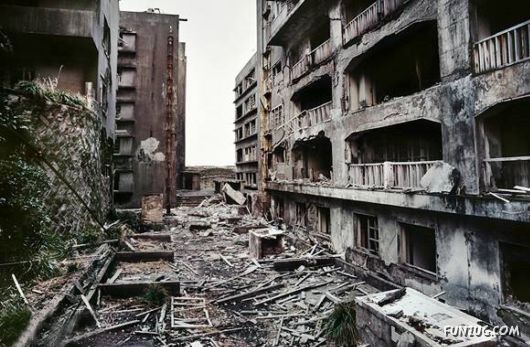 Hashima Island or Gunkandzhima a unique example of a ghost town. In the early 20th century, the Japanese company "Mitsubishi" planned to start mining coal in the island and built a lot of houses for workers. But time passed, technology does not stand still and the main natural resource was oil. Coal mines have lost their importance, and the city became inexorably empty. Now closed for the people, because all the houses are in an emergency situation, but the government is not going to give up the island – has created projects for the rehabilitation of the city. Therefore, there is still a chance to tourists to experience the mysterious atmosphere of a ghost town. 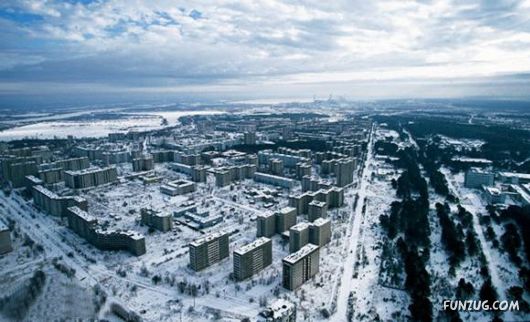 Pripyat is located in northern Ukraine, in the Chernobyl accident. Just listen: before the crash in 1986, the city population was 50,000 people. Most people work at a nuclear power plant. Immediately after the accident, the city was deserted. But the Russian people do not change – the dashing 90 years, people have risked their lives and went to the radiation-contaminated town to find something of value, in other words, engaged in looting. A great opportunity to experience the atmosphere of the city, with no risk to your health is the game "Stalker", because the game’s plot unfolds is in Pripyat. It should be noted that there has already begun to organize special tours to these mysterious places. 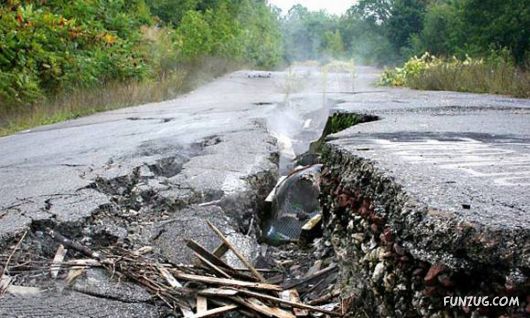 Centralia is a shining example of how stubborn and swinish attitude of senior people can devastate an entire city. Centralia was a thriving town, which was engaged in the coal industry. But about 50 years ago here razrozilsya underground fire, which reduced the population from 1 000 in 1981 to 9 (!!) People, according to the year 2008. It is the most sparsely populated point in Pennsylvania. In fact, many believe that it Centralia became a muse to create the legendary thriller "Silent Hill."
Varosha, Cyprus 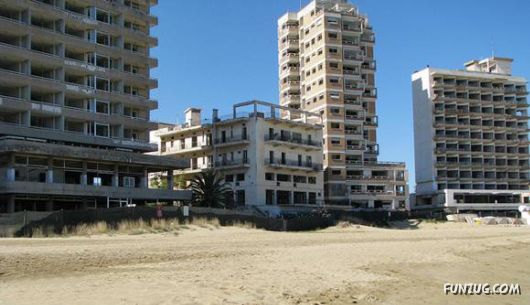 Varosha was a great resort town with many hotels, white sand beaches and the sea of tourists. But, in the fateful 1974, Turkey invaded the territory and the development of the resort was brutally preostanovleno. Local residents had to leave their homes, with the hope that they would shortly return smougt. Unfortunately, the happy ending did not happen. Turkish authorities obtyanuli area with barbed wire, the residents or the curious journalists could not enter the territory. Since then, the only visitors the resort were turtles and other fauna. Here are the consequences of wars between countries. 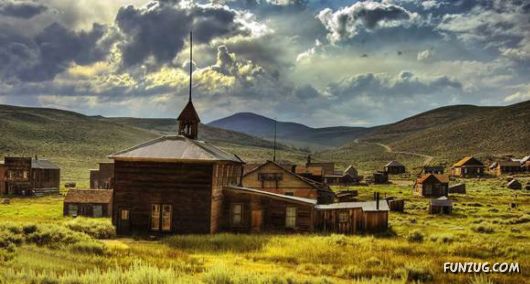 Bodie is a shining example of the American ghost town. The city was founded in 1876 and is a typical mining town with 10,000 inhabitants. There was even a Chinatown, where several hundred workaholic from China found their American dream. But, as we know, natural resources tend to dwindle, so the work was less and people began to leave the city in search of a better life. Body could stretch up to 1962, but then the most loyal people had to leave. In the same year, the town declared a national historic reserve, which is open all year round for tourists. 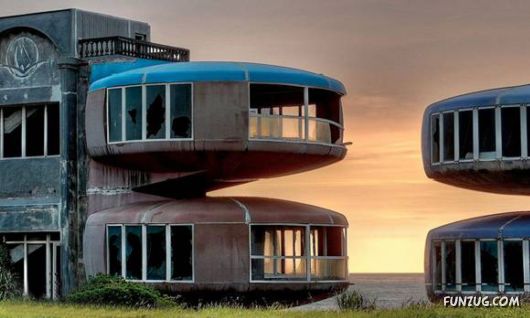 Ghost Town of San Zhi is located near the capital of Taiwan – Taipei. Assumed that it is a favorite playground of the rich people, where they can safely spend time and enjoy nature with the family. Look at these fun flats, which are more like children’s attractions! But, during the building of the city, there were several accidents and people started talking that settled here ghosts. Government by all means wanted to complete the construction and they got it, they even held a grand opening, "resort", but unfortunately due to the bad rumors, there were no buyers, and the city was doomed to desolation. 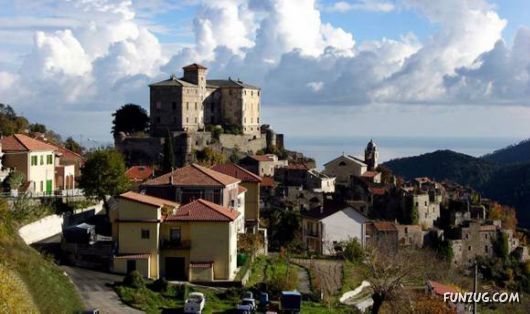 A distinctive feature of Balestrino from other ghost towns, is the fact that the city is up to its desolation has a rich history. The first mention of Balestrino brings us back to the distant 11th century, when farmers settled here, because the weather here is just wonderful and is a great place for growing olives. By 1860, the town population was 800 residents. But then, a series of earthquakes disrupt the harmony of the city. Most people did not want to be here and headed to safer regions of Italy. And 60 years later, in 1953, the last resident left this place.
World catholyte, Taiwan 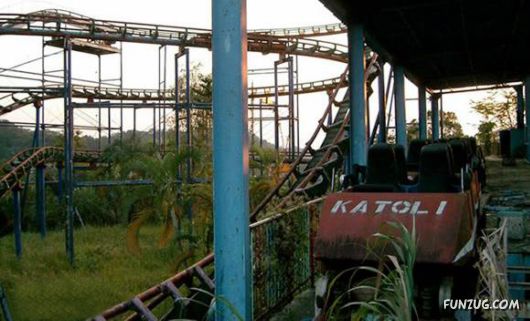 World catholyte was one of the largest amusement parks Tayavanya, but September 21, 1999, after the earthquake everything has changed dramatically. Though earthquakes are not killed people, the government had to close the park and now only tropical plants, animals and insects to enjoy the beauty of the World catholyte. Being here is really scary, because all these bright colors, pictures and statues to symbolize joy and merriment. But, instead, you feel the atmosphere of death and destruction ruthless elements. 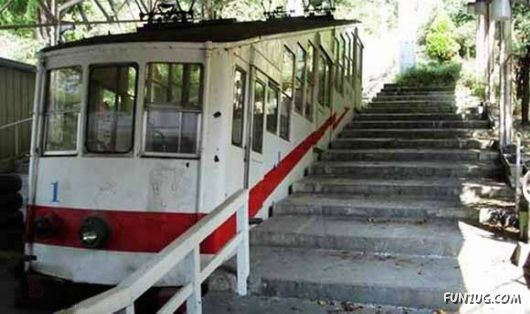 At one time, the town was a popular destination Yashima Japan. Every year, thousands of pilgrims gathered in 80 years, the government has decided to turn this place into a fashionable resort. Immediately in Yashime the construction of hotels, cafes and entertainment venues. But, after a few years, the country underwent a crisis in the real estate, which led to the bankruptcy of most companies and a project to create a paradise of Yashima was closed. The city remained stores with goods in stores, hotels, furnished in anticipation of the tourists who will never appear 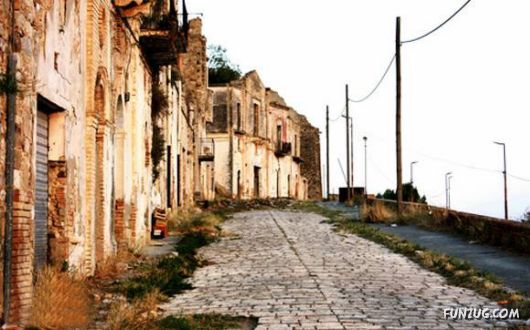 he first mention of the Kraken takes us to the far 1060. Like most medieval Italian cities, Krakow built on top of hills. In the late 19th century, the city found refuge over 2000 inhabitants. But due to frequent earthquakes, landslides and poor conditions for agriculture, people left the city.