At the 5 star Conrad Maldives Rangali Island Resort, you?ll stay in one of the 50 villas built on stilts ? some up to 500m out to sea ? with views of the lagoon and the Indian Ocean. You can also have dinner at the Ithaa Undersea Restaurant, which is 16 feet below sea level with views of the reed and marine life. 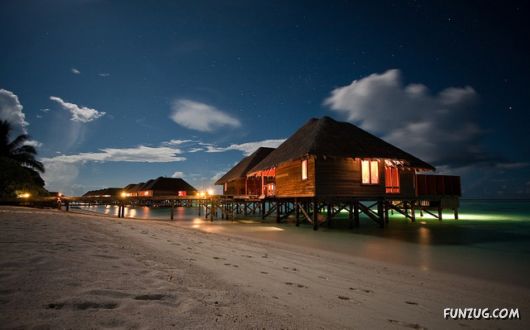 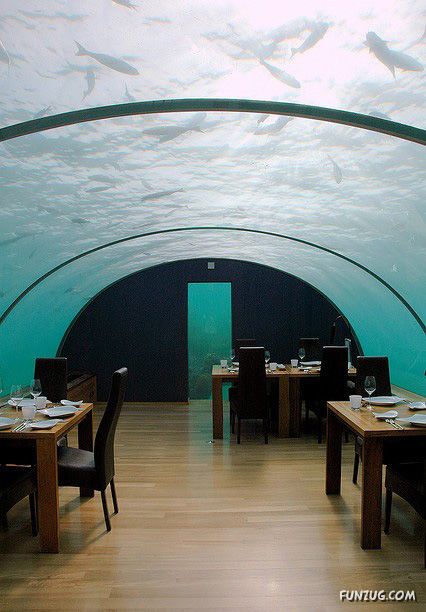 The Ithaa Restaurant sits 15 feet below the waves of the Indian Ocean, surrounded by a coral reef and encased in clear acrylic, offering diners 270-degrees of panoramic underwater views.

This internationally acclaimed hotel in Phuket is bordered by the Andaman Sea. Surrounded by water, guests can enjoy the sounds of the flowing lagoon and tropical five star living with their own private pool surrounded by coconut trees. 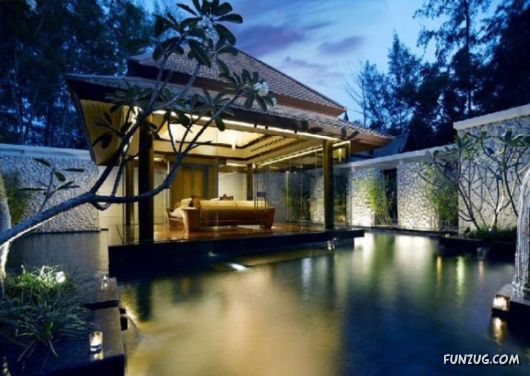 This five star resort is located on Dubai?s Palm Jumeirah, the manmade, palm-tree-shaped island just off the Jumeirah coast. The resort is a good choice for travellers seeking an action-packed aqua holiday, as it?s home to an Aquaventure Waterpark, Dolphin Bay, The Lost Chambers marine viewing site and a dive centre for travellers looking to take part in scuba lessons and excursions. The Lost Chambers Suites also offer guests underwater views of the Ambassador Lagoon from both the bedroom and bathroom. 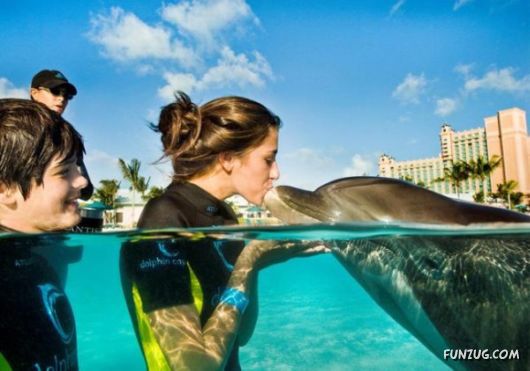 The Mandalay Bay Resort in Las Vegas has been described as an ?oceanic island paradise?, despite being located in the middle of the Nevada desert. The four star resort is built on eleven acres of beach environment, and is home to three pools, a river, an adults-only pool, a 1.6-million gallon wave pool with a sand-and-surf beach, and an onsite shark reef aquarium. The property?s main ?beach? area also doubles up as an outdoor concert environment with a massive stage extending out of the wave pool.

5. THE PALACE OF THE LOST CITY, South Africa

Travellers looking for an action-packed water adventure holiday need not look any further than The Palace of the Lost City, Sun City?s five star flagship hotel. Set amid twenty-five hectares of botanical jungle, guests are surrounded by an array of water features including winding cascades and waterfalls, lakes, lagoons, wave pools and water adventure rides. 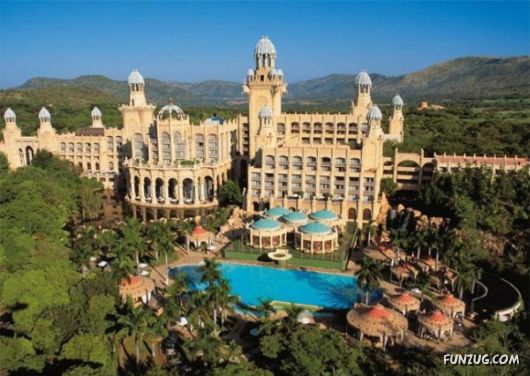 The four star Atlantis Royal Towers is located on Paradise Island in the Bahamas and occupies 171 acres of the island. The resort has been designed around the mythical theme of the Lost Continent of Atlantis, and the $15 million marina features its own village as well as the Caribbean?s largest casino. As far as activities go, guests can opt to swim with the dolphins or sea lions or ride on a water slide through shark-infested waters. 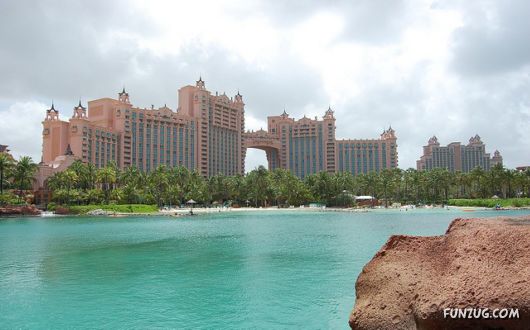 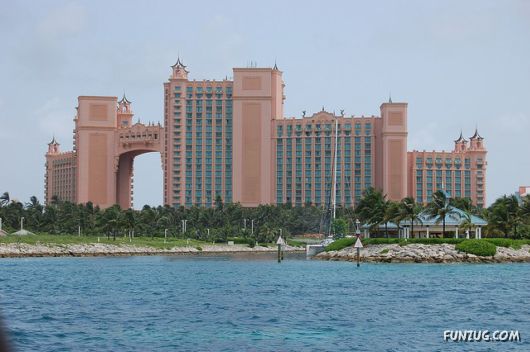 Guests will be in paradise at the Le Meridien, located on the famous tropical island in the world ? Bora Bora. The four star resort is made up of ninety-nine tropically themed bungalows, and you can see the marine life through the glass bottomed floor of the over-water ones. Guests also have access to traditional Polynesian outrigger canoes, jet skiing, sailing, shark feeding and scuba diving. 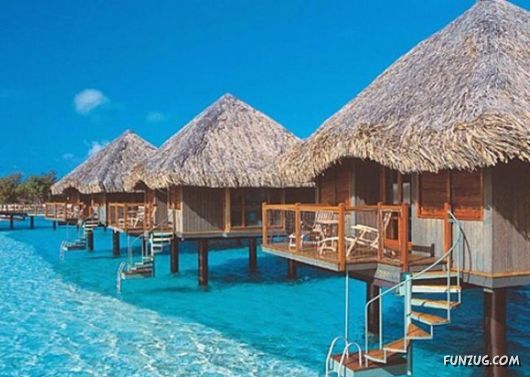 For a water experience of a different kind travellers should book a stay at the five star Marina Bay Sands Hotel in Singapore. This hotel has been described as an ?awe-inspiring structural masterpiece? thanks to the ?Sky Park?, which is an oversized infinity-edge pool that spans the top of all three hotel towers and extends 65 metres beyond, with views of Mandalay Bay and the sea. 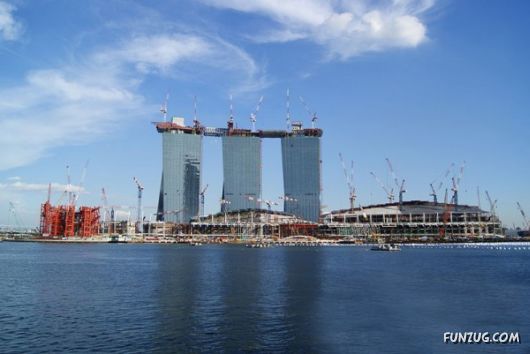 The Hilton Auckland has been designed to look like a cruise ship and is complteley surrounded by the waters of Waitemata harbour. Sitting at the end of a pier a hundred metres out into the Hauraki Gulf, gusts can enjoy being at sea without having to worry about getting sea sick. The rooms simulate a modern cruise ship cabin with curved walls and floor-to-ceiling windows, and the outdoor pool features an underwater viewing window overlooking the harbour.

The Grand Bay Hotel in Isla Navidad on the Pacific Coast has panoramic views of the ocean, lagoons and mountains . This four and a half star hotel is built in a sheltered cove on Manzanillo?s Isla Navidad, and boasts a private yacht marina and beach. Deep sea diving and the 27 round golf course are highlights. 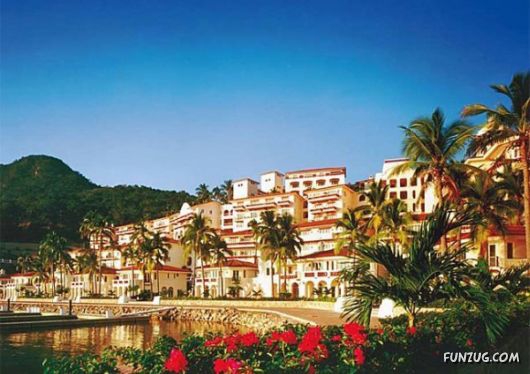