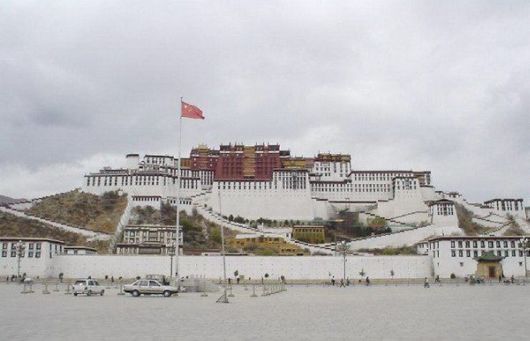 The Potala Palace (Tibetan: Wylie: Po ta la; simplified Chinese: traditional Chinese: is located in Lhasa, Tibet Autonomous Region. It was named after Mount Potala, the abode of Chenresig or Avalokitesvara. The Potala Palace was the chief residence of the Dalai Lama until the 14th Dalai Lama fled to Dharamsala, India, after an invasion and failed uprising in 1959. Today the Potala Palace has been converted into a museum by the Chinese.
The building measures 400 metres east-west and 350 metres north-south, with sloping stone walls averaging 3 m. thick, and 5 m. (more than 16 ft) thick at the base, and with copper poured into the foundations to help proof it against earthquakes. Thirteen stories of buildings ? containing over 1,000 rooms, 10,000 shrines and about 200,000 statues ? soar 117 metres (384 ft) on top of Marpo Ri, the "Red Hill", rising more than 300 m (about 1,000 ft) in total above the valley floor. Tradition has it that the three main hills of Lhasa represent the "Three Protectors of Tibet." Chokpori, just to the south of the Potala, is the soul-mountain (bla-ri) of Vajrapani, Pongwari that of Manjushri, and Marpori, the hill on which the Potala stands, represents Chenresig or Avalokiteshvara. 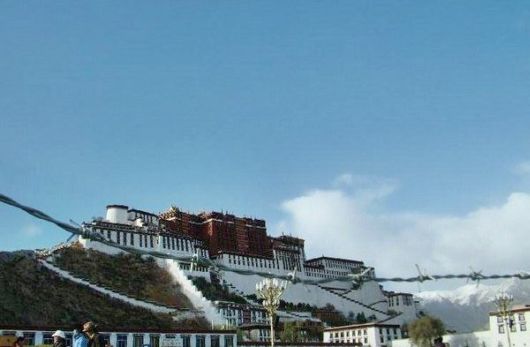 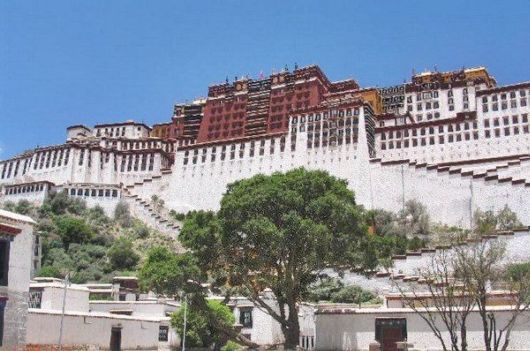 History
The site was used as a meditation retreat by King Songtsen Gampo, who in 637 built the first palace there in order to greet his bride Princess Wen Cheng of the Tang Dynasty of China.
Lozang Gyatso, the Great Fifth Dalai Lama, started the construction of the Potala Palace in 1645 after one of his spiritual advisers, Konchog Chophel (d. 1646), pointed out that the site was ideal as a seat of government, situated as it is between Drepung and Sera monasteries and the old city of Lhasa. The Dalai Lama and his government moved into the Potrang Karpo (‘White Palace’) in 1649. Construction lasted until 1694, some twelve years after his death. The Potala was used as a winter palace by the Dalai Lama from that time. The Potrang Marpo (‘Red Palace’) was added between 1690 and 1694.
The new palace got its name from a hill on Cape Comorin at the southern tip of India?a rocky point sacred to the bodhisattva of compassion, whom is known as Avalokitesvara, or Chenrezi. The Tibetans themselves rarely speak of the sacred place as the "Potala," but rather as "Peak Potala" (Tse Potala), or usually as "the Peak.
The palace was slightly damaged during the Tibetan uprising against the Chinese in 1959, when Chinese shells were launched into the palace’s windows. It also escaped damage during the Cultural Revolution in 1966 through the personal intervention of Zhou Enlai, who was then the Premier of the People’s Republic of China but who personally opposed the revolution. Still, almost all of the over 100,000 volumes of scriptures, historical documents and other works of art were either removed, damaged or destroyed.
The Potala Palace was inscribed to the UNESCO World Heritage List in 1994. In 2000 and 2001, Jokhang Temple and Norbulingka were added to the list as extensions to the sites. Rapid modernisation has been a concern for UNESCO, however, which expressed concern over the building of modern structures immediately around the palace which threaten the palace’s unique atmosphere. The Chinese government responded by enacting a rule barring the building of any structure taller than 21 metres in the area. UNESCO was also concerned over the materials used during the restoration of the palace, which commenced in 2002 at a cost of RMB180 million (US$22.5 million), although the palace’s director, Qiangba Gesang, has clarified that only traditional materials and craftsmanship were used. The palace has also received restoration works between 1989 to 1994, costing RMB55 million (US$6.875 million).
Daily visitorship to the palace was restricted to 1,600 a day, with opening hours reduced to six hours daily to avoid over-crowding from 1 May 2003. The palace was receiving an average of 1,500 a day prior to the introduction of the quota, sometimes peaking to over 5,000 in one day. Visits to the structure’s roof was banned after restoration works were completed in 2006 to avoid further structural damage. Visitorship quotas were raised to 2,300 daily to accommodate a 30% increase in visitorship since the opening of the Qingzang railway into Lhasa on 1 July 2006, but the quota is often reached by mid-morning. Opening hours were extended during the peak period in the months of July to September, where over 6,000 visitors would descend on the site. 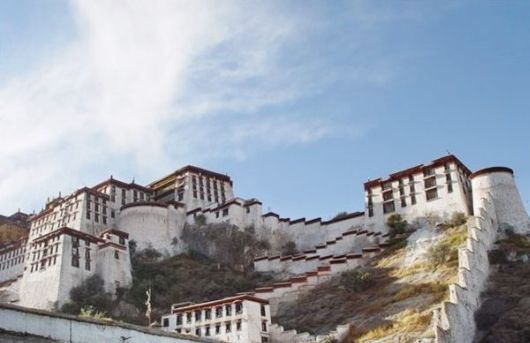 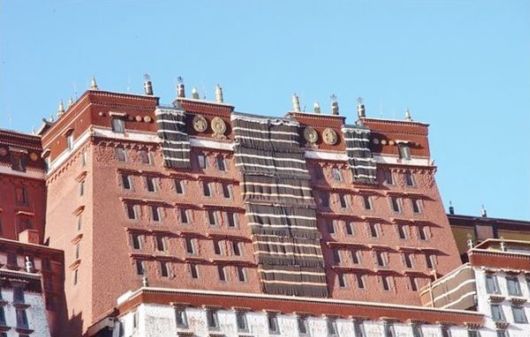 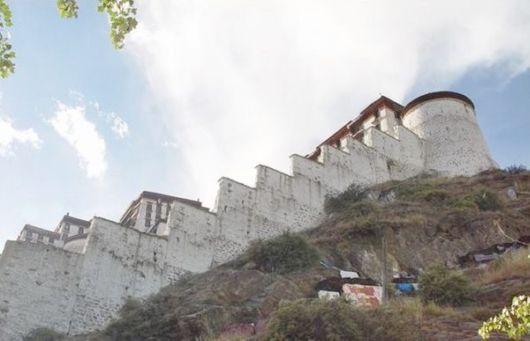 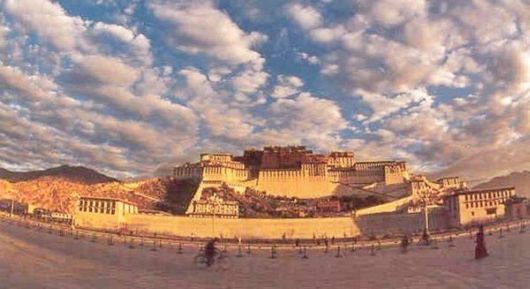 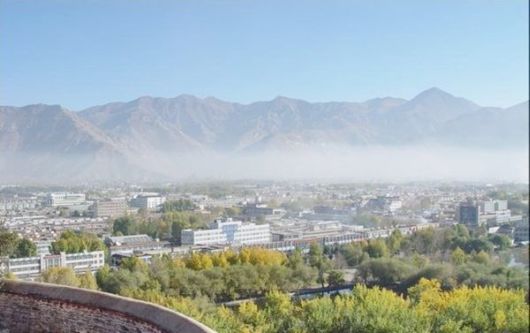 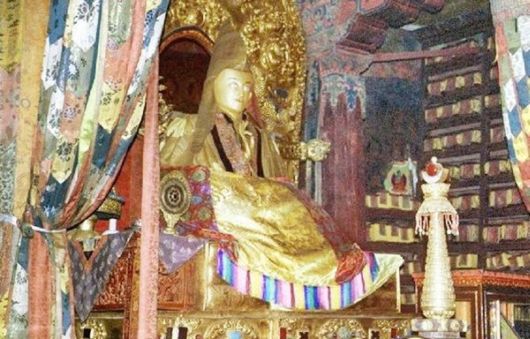 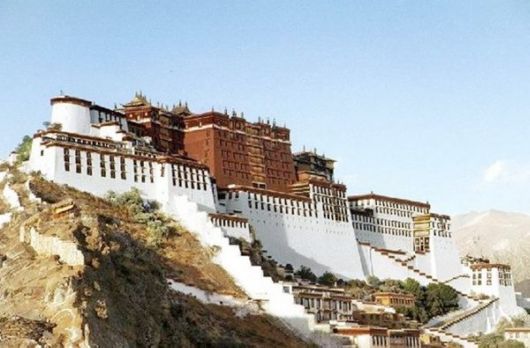 Architecture
Built at an altitude of 3,700 m (12,100 ft), on the side of Marpo Ri (‘Red Mountain’) in the center of Lhasa Valley, the Potala Palace, with its vast inward-sloping walls broken only in the upper parts by straight rows of many windows, and its flat roofs at various levels, is not unlike a fortress in appearance. At the south base of the rock is a large space enclosed by walls and gates, with great porticos on the inner side. A series of tolerably easy staircases, broken by intervals of gentle ascent, leads to the summit of the rock. The whole width of this is occupied by the palace.
The central part of this group of buildings rises in a vast quadrangular mass above its satellites to a great height, terminating in gilt canopies similar to those on the Jokhang. This central member of Potala is called the "red palace" from its crimson colour, which distinguishes it from the rest. It contains the principal halls and chapels and shrines of past Dalai Lamas. There is in these much rich decorative painting, with jewelled work, carving and other ornament.
The Chinese Putuo Zongcheng Temple, built between 1767 and 1771, was modeled after the Potala Palace. The palace was named by the American television show Good Morning America and newspaper USA Today as one of the "New Seven Wonders". 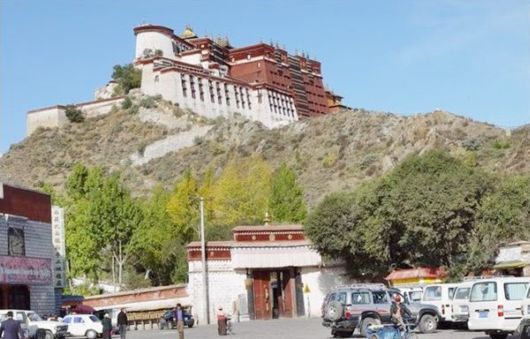 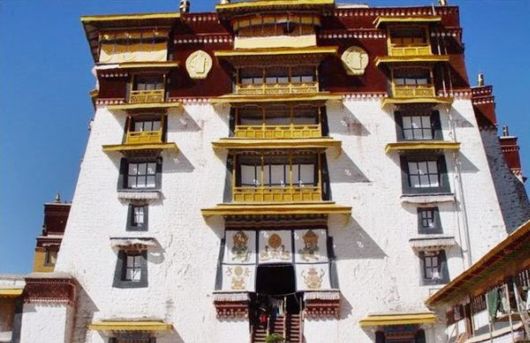 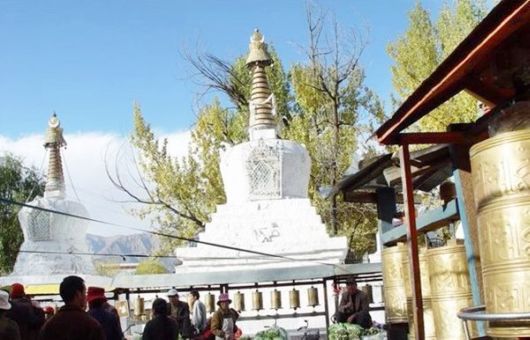