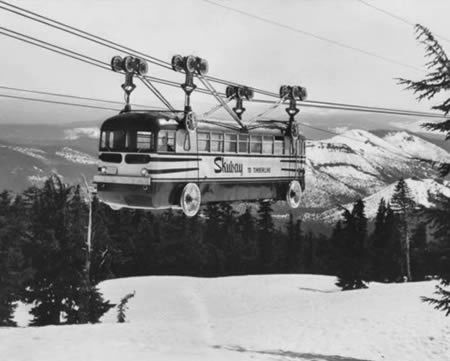 The Ski-Lift Bus, a bus turned into a gondola, was used on Mt. Hood, Oregon between Government Camp and Timberline Lodge. It was built in 1956 and, at the time, it was the world’s longest tram. It was constructed from old city buses and used a cable system that was developed by timber loggers. The Tram opened on February 3rd, 1956 but only lasted a few seasons before it turned into a financial disaster. In 1961 the cable system and tramway was permanently removed from the slopes of Mount Hood. 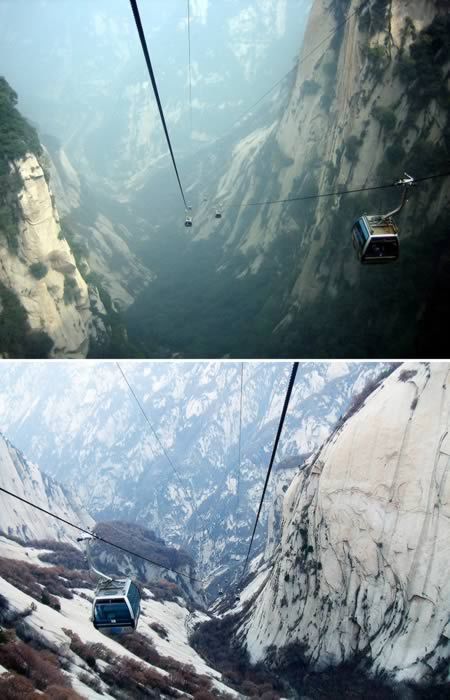 Mount Hua is a sacred Taoist mountain located in Shaanxi Province, China. It is one of the Five Great Mountains. The 1,997-meter-tall mountain, true to its reputation as the "most precipitous mountain under heaven," is a cluster of five peaks with breathtaking cliff faces presenting a tough challenge to mountaineers.

For many years most people have taken a traditional but efficient walking ascent and cable car descent to climb this mountain. By taking this route, visitors can experience not only its danger but also the meaningful scenic locations. 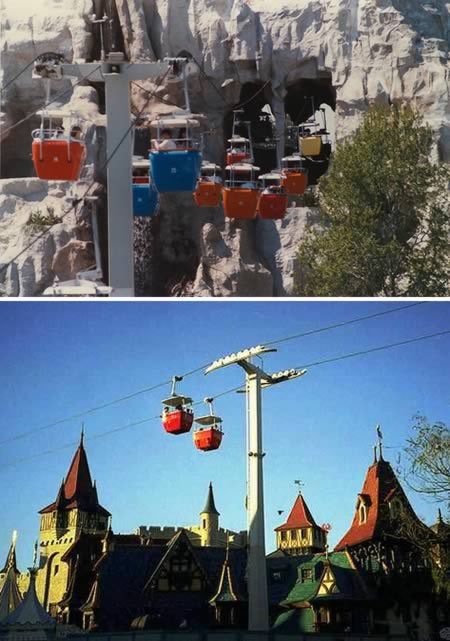 Most visitors to Disneyland before the mid-nineties will remember this attraction, even if they never rode it. After all, an aerial gondola ride that went through the Matterhorn was something that was pretty easy to remember. The ride was built in 1956, and while plenty of similar rides exist in parks around the country these days, at the time it was the first aerial ropeway in the U.S. In fact, the Skyway was actually built before the Matterhorn, which had to be built around the pre-existing gondola ride.

While the ride was very popular for allowing guests to view the entire park from above, it was closed in 1994 because the Matterhorn battery supports started to show stress cracks. 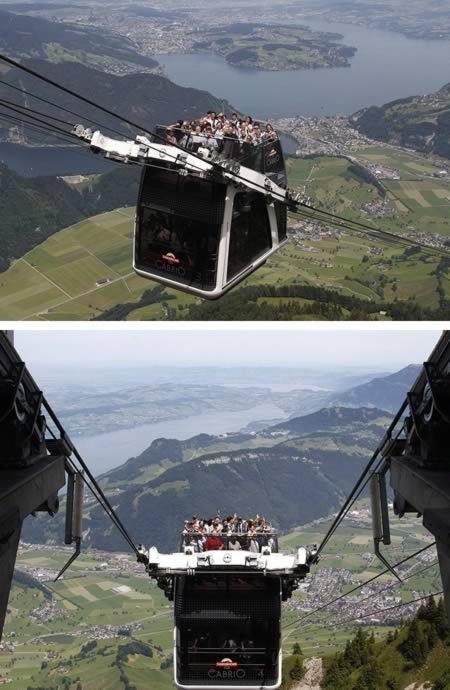 The thought of riding in a cable car which soars 1,900 meters up into the Swiss Alps will strike fear into the hearts of those who are afraid of heights. But at least being encased in glass can usually offer some kind of comfort to terrified passengers and a semblance of safety. However, for those riding the world’s first convertible cable car, even that small crumb of security won’t be available.

Opened in Switzerland, The Cabrio rises to a height of 1.2 miles above sea level as it climbs the Stanserhorn mountain near the city of Lucerne. Carrying up to 60 passengers at any one time, the innovative cable car has room for half of them to brave the bracing mountain air and stand on the top deck. Even those riders who dislike heights might not find the inside much of a refuge, since the lower floor is made entirely of glass.

Starting at Kalti, which is 711 meters above sea level, the Cabrio transports passengers to the summit station 1,850 meters up.

The Kharkiv lift was put into operation in 1971. It runs from the Central Park of Culture and Rest.Bitter (or Lesopark) to Paul’s district field. Immediately after its opening, the road was used not only as a stroller, but also as a transportation system. According to the stories, students were especially keen to use the Kharkov cable car. They traveled from dormitories to Pauline Field to institutions located in the heart of the city. Such a route to the center was not only unusual and fascinating, but also cheap.

The length of the route between the two landing stations of "Gorpark" and "Paul’s Field" is 1,385 m. Rising to a height of 26 meters (this is the highest point), the Kharkov cable car offers wonderful views. It is supported by 18 towers of varying heights, going up and down from 8 to 26 meters, and it has 124 double passenger cabins. 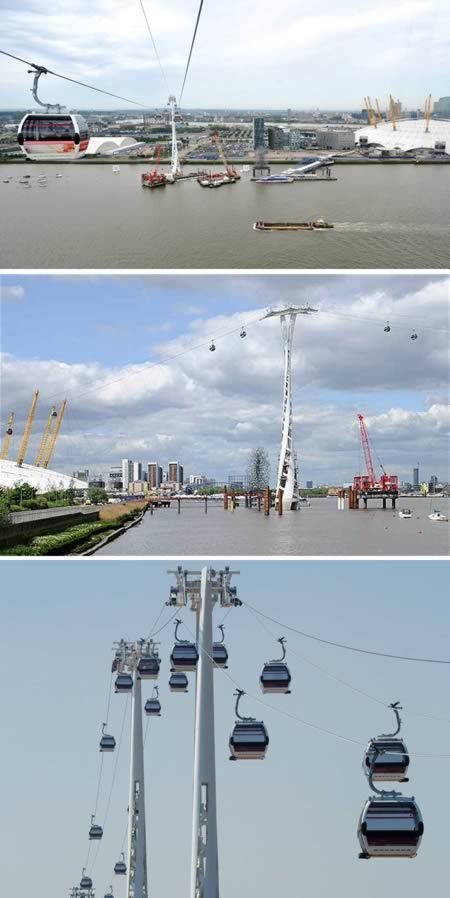 It was certainly one way to beat the predicted chaos of the capital’s public transportation during the Summer Games. If you get stuck, at least there are the dramatic views of London’s skyline, not to mention a glimpse of the Olympic stadium, to enjoy.

The cable car across the River Thames was officially launched by Boris Johnson in June 2012, just a month prior to the 2012 London Olympics. The London Mayor was the first passenger on the £44 million Emirates Air Line, which offers 360-degree views of the city. The system is sponsored by Dubai-based airline Emirates, which has contributed £36 million to the project in a 10 year deal. 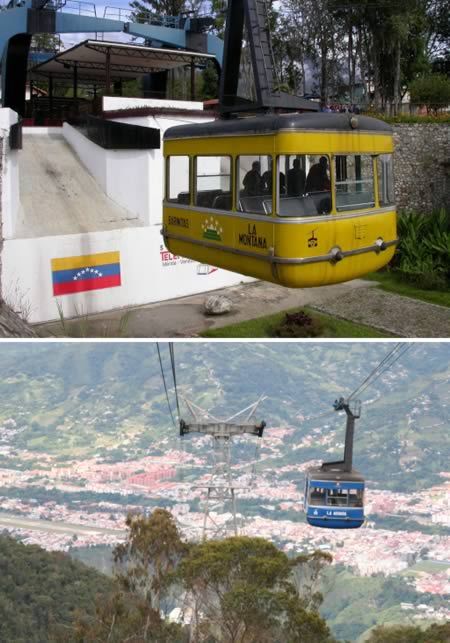 The highest and longest teleférico in the world takes an hour to ascend from a plateau in the Andes located at 10,250 feet (3,125 meters) to the top of Pico Espejo. Stop off at four stations on the way if you wish, and at the top admire Pico Bolívar.
8. Bondinho (Rio de Janeiro, Brazil) 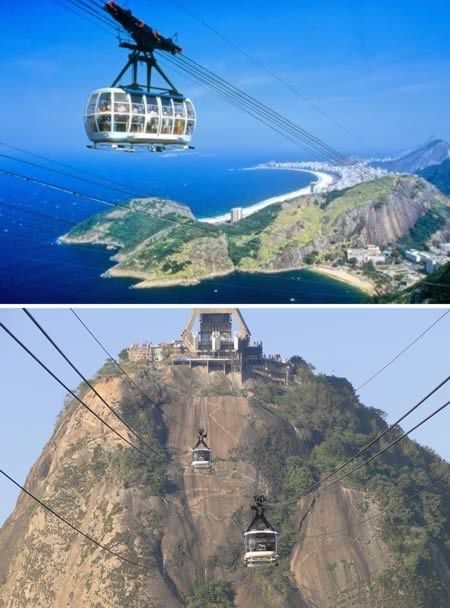 Sugarloaf Mountain (in Portuguese, Pão de Açúcar), is a peak situated in Rio de Janeiro, Brazil at the mouth of Guanabara Bay on a peninsula that sticks out into the Atlantic Ocean. Rising 396 meters (1,299 ft.) above the harbor, its name is said to refer to its resemblance to the traditional shape of concentrated refined loaf sugar.

A glass-walled cable car, capable of holding 65 passengers, runs along a 1,400 meter route between the peaks of Pão de Açúcar and Morro da Urca every 20 minutes. The original cable car line was built in 1912 and rebuilt around 1972/1973 and in 2008. The cable car leaves a ground station located at the base of the Babilônia hill, travelling to the Urca hill and then to the Pão de Açúcar.

In the 1979 James Bond film Moonraker, the villainous henchman Jaws (played by Richard Kiel) attempts to kill 007 (Roger Moore) and the agent’s ally, Dr. Holly Goodhead (Lois Chiles), on one of its cable cars. However, Bond and Goodhead escape and Jaws collides with the building at the bottom of the cable car route, demolishing the building but escaping unscathed. 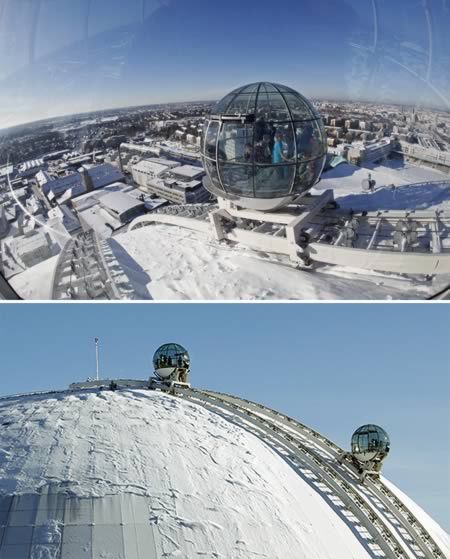 SkyView is the new world-class attraction that takes you to the top of the world’s largest spherical building, the Ericsson Globe, a Stockholm landmark.

From the apex 130 meters (425 feet) above sea level, you get a fantastic view encompassing all of Stockholm. The two SkyView gondolas depart every 10 minutes, and the entire visit takes about 30 minutes. A restaurant, café and souvenir shop are adjacent to SkyView. 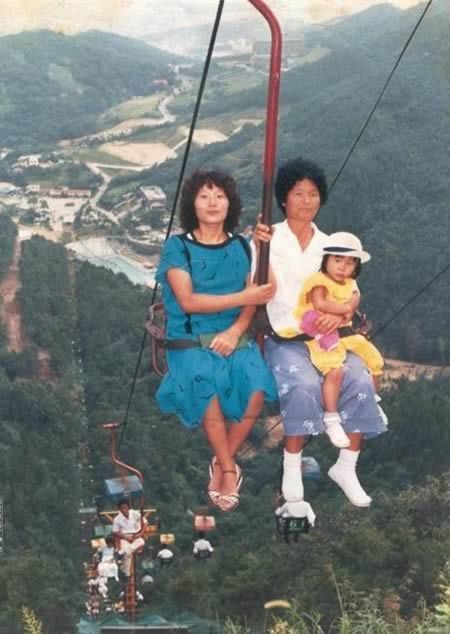 This is Gwangju’s Hotel Mudeung Park Lift in 1984. That’s what I call an extreme cable chair ride.