In the world there are many places that are called "Venice." But the Chinese town of Zhouzhuang is particularly well suited for this definition. Zhouzhuang – is the oldest Chinese settlement on the water. Its history goes back 900 years. City is a series of islands surrounded by water. As in Venice, through which spanned numerous bridges. Zhouzhuang located 35 kilometers southeast of the eastern city of Suzhou, Jiangsu Province is known as China’s first village on the water. It is one of the most famous water townships in China, noted for its profound cultural background, the well preserved ancient residential houses and the elegant watery views. It has been called the "Venice of the East". 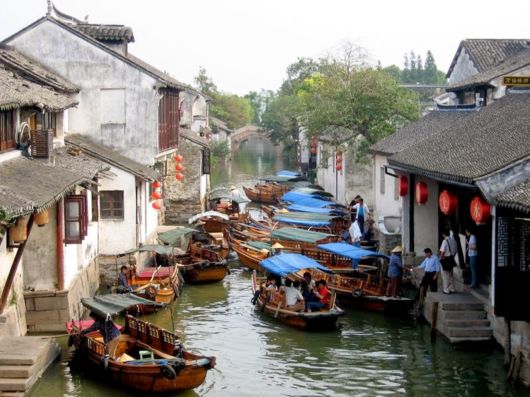 Zhouzhuang is surrounded by four rivers of water that formed it eight streets, connected by a few dozen stone bridges. Bridges are very different, but the most typical are paired Shuangqiao bridges built during the Ming Dynasty. They consist of an arched stone span from one beam and stone. Architecturally unique is the "two-pass bridge," thrown across the two channels. Streets are rivers, passages are connected by bridges, and houses built along the rivers, which are the roads on which the locals are moved by boat. 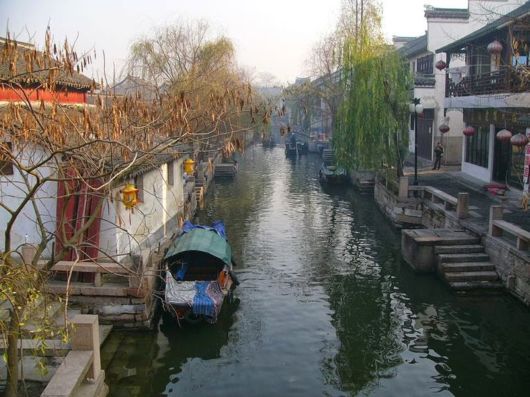 Zhouzhang originated as a village by the name of Zhenfengli during the Spring and Autumn (BCE (770-476) Period of the Eastern Zhou (BCE 770-221) Dynasty. It received its current name in CE 1086 during the Northern Song (CE 960-1127) Dynasty when the village, which had belonged to the fiefdom of Yaocheng, was donated to Zhenfengli’s Quanfu ("Full Fortune") Temple ? also known as Blessed Temple ? by a devout Buddhist by the name of Zhou Digong, who owned this piece of land (note that Zhouzhang means "Zhou Hamlet/ Village). 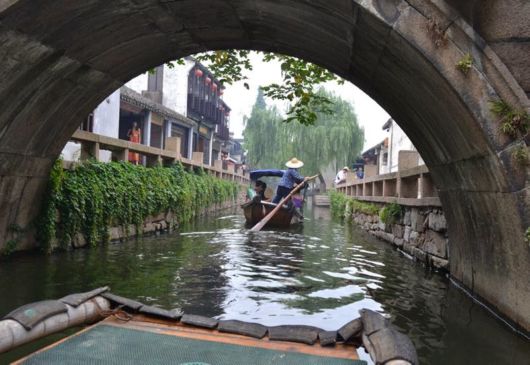 Most of the old houses and bridges of Zhenfengli cum Zhouzhang stem from the Ming (CE 1368-1644) and Qing (CE 1644-1911) Dynasty period, though some are from the Yuan (CE 1279-1368) Dynasty period. Less than 40% of the structures in Zhouzhuang stem from the pre-Yuan era, while a few ? including the town’s new water tower and Quanfu Pagoda, the latter of which was erected in order to conceal the view of the newly erected water tower as much as possible (which explains why Quanfu Pagoda lies in the northwestern section of the town, near the new archway entrance to Zhouzhuang, while Quanfu Temple itself lies in the southwestern section of Zhouzhuang ? stem from the end of the 20th century. 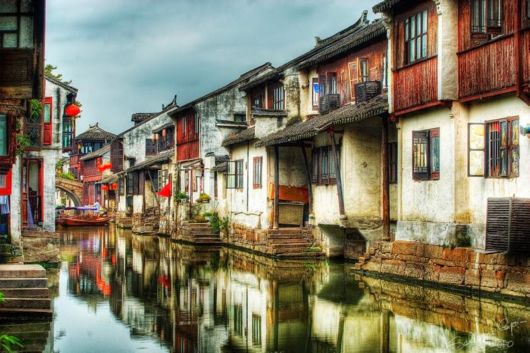 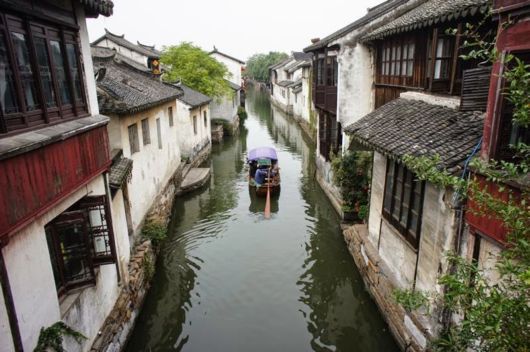 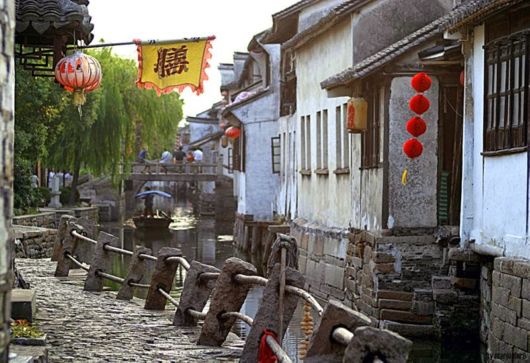 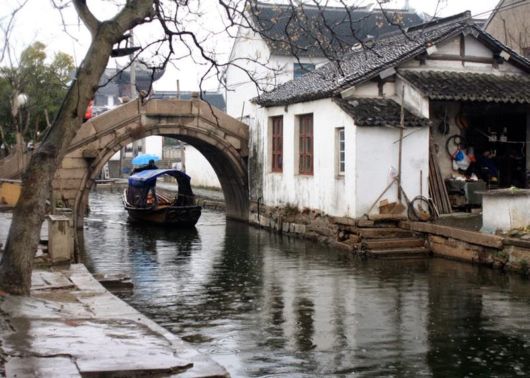 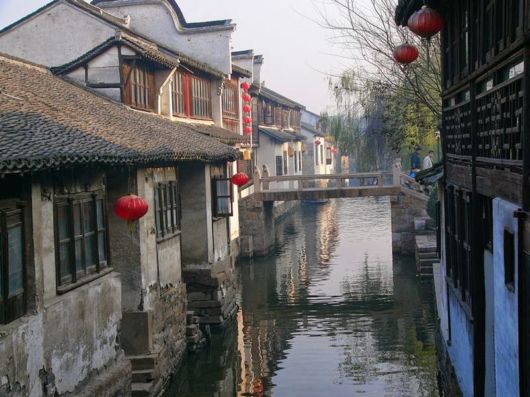 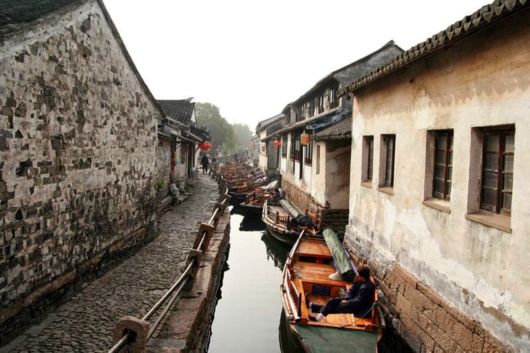 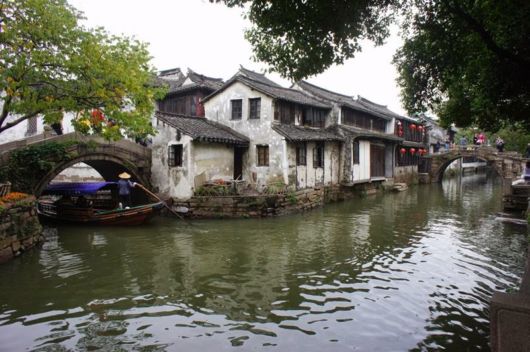 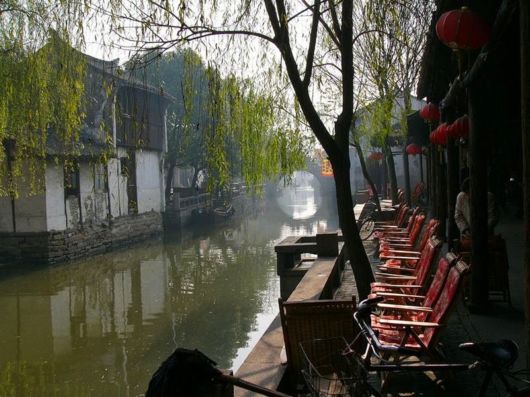 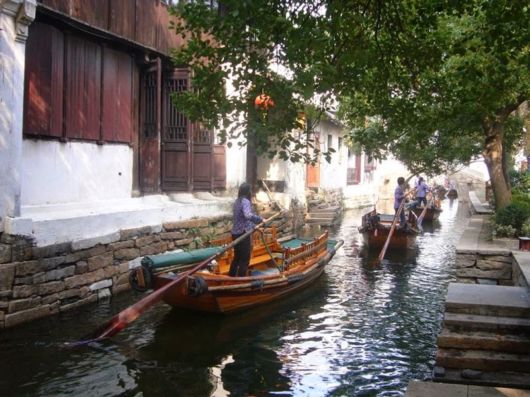 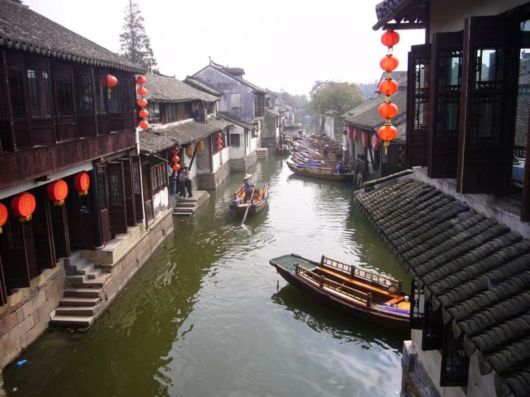 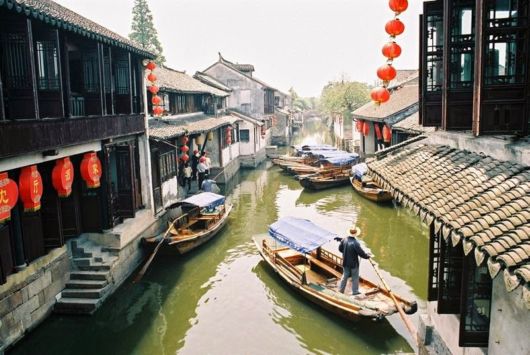 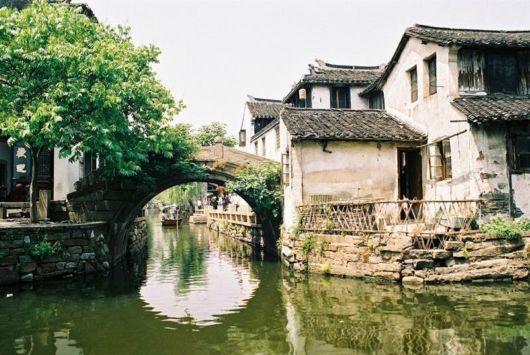 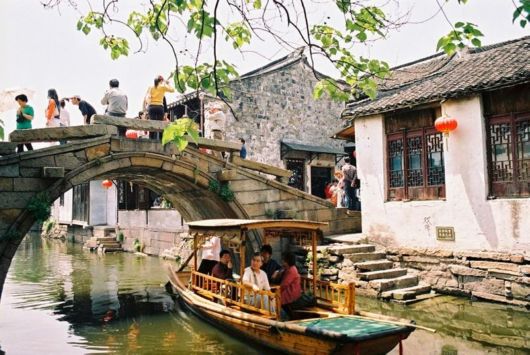 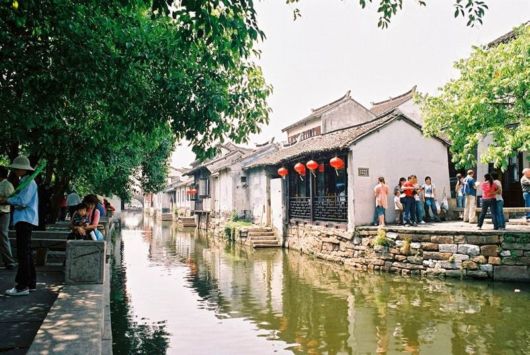 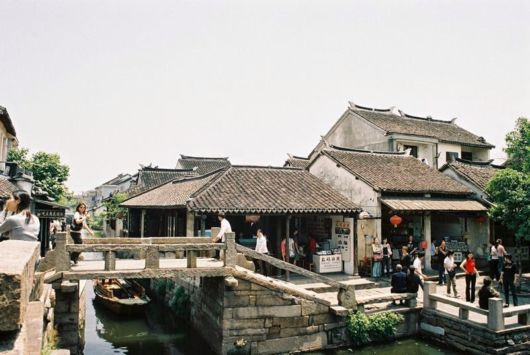 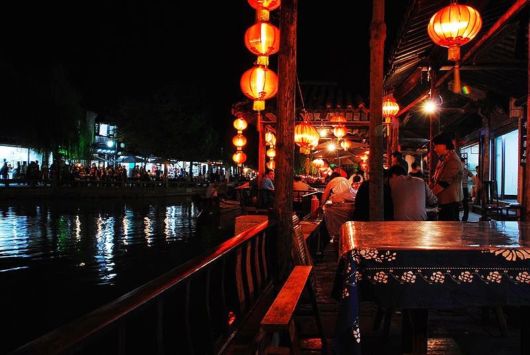 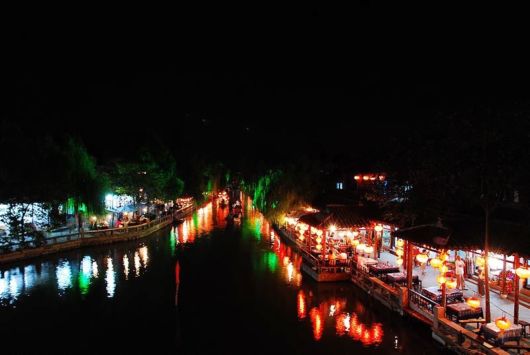 Zhouzhang is a beautiful, picturesque village of willow-lined canals that are contiguous with rows of waterside buildings with whitewashed walls and gray slate roofs, and whose wooden eaves are upturned in the quintessentially Chinese fashion. "Inland" from the canals and the stone arch bridges are streets paved with cobblestones.

Since the 12th century, Zhouzhuang has been connected to the Grand Canal, which extends from Hangzhou in the south to Beijing in the north. This development naturally brought prosperity to the region of Suzhou, and it was thanks to this prosperity that the region in part developed its own scholars and artists, and in part attracted them from outside. Many of these artists and members of the literati were either native sons, or chose to make the idyllic watertowns of the region their new home.