1. Window washer in coma after falling 47 Stories woke up on Christmas day 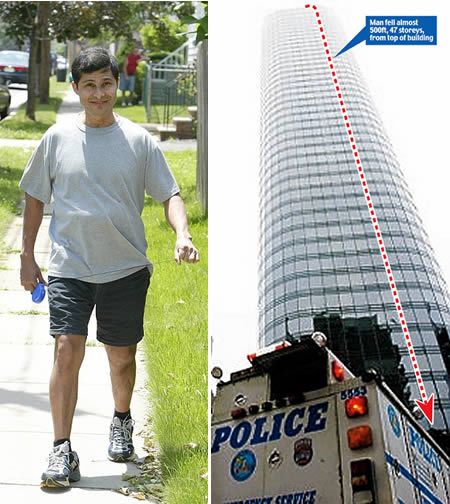 Alcides Moreno, 37, fell 47 stories from a New York skyscraper when a freak accident sent his window-washing platform plunging to the concrete pavement. The accident killed his brother, who was working on the same scaffolding platform, and left Moreno is such a bad state that doctors couldn’t risk moving him to an operating room. Instead, they operated on him in the emergency room, leaving him in a vegetative state for nearly three weeks. Finally, he showed signs of consciousness and spoke — on Christmas day. Less than a month later, he was discharged with the expectation that he would walk again within a year’s time. Considering that the death rate from even a four-story fall is about 50%, Moreno’s survival, thanks in part to some fortunate circumstances, is astounding. 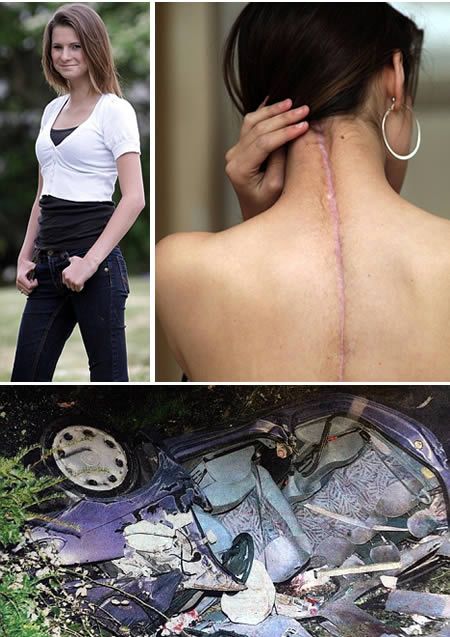 2. Teenage model had her body held together by 11 rods

Katrina Burgess, 17, was told by doctors she may never walk again after surviving a 70mph car crash with a broken neck and back, and a catalogue of other injuries. But after being put back together with 11 metal rods and enough pins and screws to send an airport security detector into overdrive, Katrina was signed up by a modeling agency.

Surgeons saved her life after her car left the M5 and crashed into a ditch as she travelled towards her home town of Weymouth, Dorset. She snapped her back, punctured both lungs and broke her neck, her pelvis, her left leg and several ribs. Surgeons at Musgrove Park Hospital in Taunton, Somerset, said that without surgery to help the bones to fuse, her spinal injuries in particular could deteriorate, risking death.

Doctors inserted a rod from her hip to her knee in her left leg the day after she was admitted to hospital. It was secured inside with four titanium pins. The most risky operation came a week later. They sliced open her back and inserted six more horizontal rods up the length of her back to support her spine. A week after that, they inserted a titanium screw to the top of her spine to support the break in her fragile neck. Only day after the last operation she was able to take her first steps.

Astonishingly, five months on from the crash, the teenager has recovered to the point where she no longer even needs painkillers. 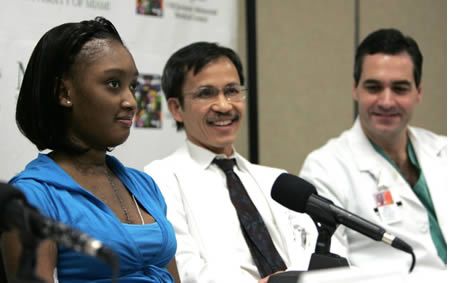 It was supposed to be a great day for 14-year-old D’Zhana Simmons, who received a transplant to replace her enlarged heart. However, her dream turned into a nightmare when the new heart failed to function properly. Doctors had to remove the new organ, but without another heart available and with D’Zhana weakened from the surgery, they had to come up with a stopgap measure: two artificial pumps that kept the blood flowing in her body for close to four months. The feat was newsworthy partially because of D’Zhana’s age and partially because when an artificial heart is used to sustain a patient, the patient’s own heart is usually left in the body. Finally, on October 29, D’Zhana received another heart transplant, and it was so successful that she had a kidney transplant the very next day. 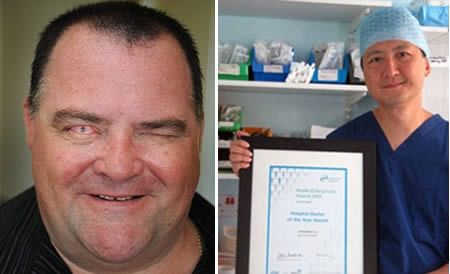 4. Blind man got his sight back after having a tooth implanted into his eye

Martin Jones a 42-year-old builder was left blind after an accident at work more than a decade ago. But a remarkable operation – which implants part of his tooth in his eye – has pierced his world of darkness. The procedure, performed fewer than 50 times before in Britain, uses the segment of tooth as a holder for a new lens grafted from his skin.

He lost his sight after a tub of white hot aluminium exploded in his face at work in a scrapyard. He suffered 37 per cent burns and had to wear a special body stocking for 23 hours a day. He also had his left eye removed. But surgeons were able to save the right eye, even though he was unable to see through it. At first specialists in Nottingham tried to save his sight using stem cells from a donor but the attempt failed.

It was only when a revolutionary new operation was pioneered at the Sussex Eye Clinic in Brighton that he was given a chance to have his sight back. During the procedure, a minute section of a patient’s tooth is removed, reshaped and chiselled through to grip the man-made lens which is then placed in its core. It is implanted under an eyelid where it becomes covered in tissue.

The process requires a living tooth as an implant because doctors suggest there are chances the eye would reject a plastic equivalent. So a canine – which is the best option due to its shape and size – was taken out of Mr Jones’ mouth. A patch of skin is then taken from the inside of the cheek and placed in the eye for two months, where it gradually acquires its own blood supply. The tooth segment is finally transplanted into the eye socket. The flap of grafted skin is then partially lifted from the eye and placed over its new sturdy base.

Mr Jones, from Rotherham, South Yorkshire, was able to see for the first time his wife Gill, 50, whom he had married four years ago.

5. Mother who had to chose to save one twin got to keep both after disconnecting blood vessels

Shannon and Mike Gimbel faced an agonizing choice. Doctors told them one of the twin girls they were expecting needed to be terminated or both would die. Doctors at Swedish Medical Center had diagnosed Gimbel’s twins with Twin-To-Twin Syndrome, or TTTS. It is a condition in which the twins are connected by blood vessels. One twin literally drains the life out of the other. Left untreated, there is an 80 to 90 percent chance that one or both will die.

Shannon and Mike were struggling with the suggestion to terminate the weaker baby when their physician at Swedish, Dr. Kent Heyborne, approached them with another option. He’d made contact with Drs. Robert Bell and Michael Belfort of St. Mark’s Hospital in Salt Lake City, Utah. The Utah surgeons teamed with those at Swedish to perform laser surgery in the womb to cauterize the blood vessels that were connecting, and slowly killing, the twins.

Shannon says she remembers holding her breath as a nurse used an ultrasound to listen for heartbeats after the surgery. One, then another. Both girls had made it. Reese and McKenna Gimbel were born at Swedish two months later.

Jordan Taylor was in a car accident that separated his skull from his vertebrae. There was no connection between the bones of the neck and the head. Doctors call the injury an "orthopedic decapitation" and at the time gave Jordan a one percent chance for survival.

The tissue may have been destroyed, but the faith of Jordan’s family was intact. Word about what happened to Jordan spread to the family’s church and others churches across the country. Jordan’s mother says at one time she knew of at least 20 churches that were praying for her son.

Dr. Roberts reconnected Jordan’s head to his neck with a metal plate, screws and titanium rods. 3 months after the accident, Jordan left the hospital and is now back at school.

7. Wife shot by husband got a new face

Connie Culp is a 46-year-old Ohio woman who has had the first face transplant in the US, and her new look was a far cry from the puckered, noseless sight that made children shrink away in horror, after being shot by her husband.

Culp’s expressions are still a bit wooden, but she can talk, smile, smell and taste her food again. Her speech is at times a little tough to understand. Her face is bloated and squarish, and her skin droops in big folds that doctors plan to pare away as her circulation improves and her nerves grow, animating her new muscles. Culp’s husband, Thomas, shot her in 2004 then turned the gun on himself. He went to prison for seven years. His wife was left clinging to life. The blast shattered her nose, cheeks, the roof of her mouth and an eye. Hundreds of fragments of shotgun pellet and bone splinters were embedded in her face. She needed a tube into her windpipe to breathe. Only her upper eyelids, forehead, lower lip and chin were left.

She endured 30 operations. Doctors took parts of her ribs to make cheekbones and fashioned an upper jaw from one of her leg bones. She had countless skin grafts from her thighs. Still, she was left unable to eat solid food, breathe on her own, or smell. Then, in a 22-hour operation, Dr. Maria Siemionow led a team of doctors who replaced 80 percent of Culp’s face with bone, muscles, nerves, skin and blood vessels from another woman who had just died. It was the fourth face transplant in the world.

No information has been released about the donor or how she died, but her family members were moved when they saw before-and-after pictures of Culp. 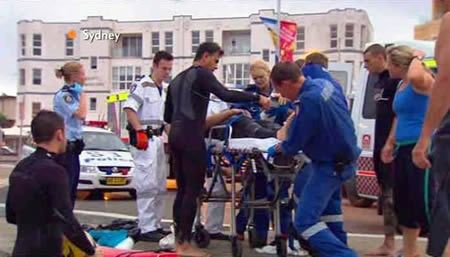 8. Surfer mauled by a shark had his hanging hand reattached

Thirty-three- year-old Glenn Orgias was attacked by a great white shark while surfing at Sydney’s Bondi Beach. He was taken to St Vincent’s Hospital with his hand hanging by a three centimetre piece of skin. Plastic surgeon Dr Kevin Ho never expected that they would be able to reattach the hand.. But given the patient general health and the speed of which he was rushed into the operating theatre made it a possibility that he could have his hand reattached. Dr Ho said leeches were used as part of the effort to restore blood flow to the hand, and he is hopeful that Mr Orgias will regain function in it.

A motorcycle accident almost killed David Blancarte 21 years ago. He was spared his life, but was unable to move his legs. He was confined to a wheelchair for 20 years. But two years ago, he was bitten by a brown recluse spider and was hospitalized for and spent 8 months in physical therapy.

In therapy, a nurse noticed a spasm in one of Blancarte’s legs and run some tests. Five days later David was walking again. 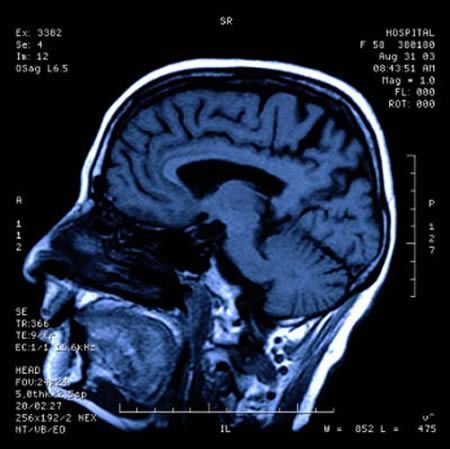 10. Near-vegetative man was back to life after stimulation electrodes were implanted into his skull

A man who was left in a near-vegetative state by a serious assault was able to speak and eat again. The severely brain-injured patient, who is now 38, was unable to communicate, swallow or make coordinate movements for six years, before doctors revived him from this minimally conscious state (MCS) with a revolutionary therapy.

Since his skull was implanted with electrodes to stimulate a deep-lying and undamaged part of his brain, he has improved so dramatically that he can now feed himself, brush his hair and recognize and talk to his parents and doctors. The transformation achieved by the deep brain stimulation (DBS) technique, which is already used to treat Parkinson’s disease and some mental illnesses, has raised hopes that it could offer a way back to consciousness for many people with similarly serious brain damage.