The world is a giant jigsaw puzzle, spotted with both exquisitely beautiful and potentially dangerous places. While you may dream of spending a lifetime in some of the true paradises-on-earth, you should be equally wary of stepping up in some real hell spots for your own safety. But not everyone is fortunate enough to get a cozy and safe home and there are places on earth where people are actually living on the edge of peril.
Here are top 10 such nightmarish places on earth where you would never want to live: 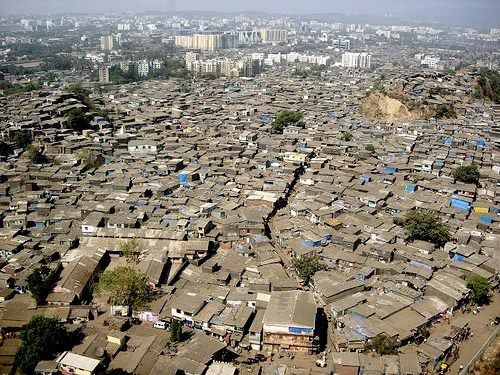 The slums of Mumbai 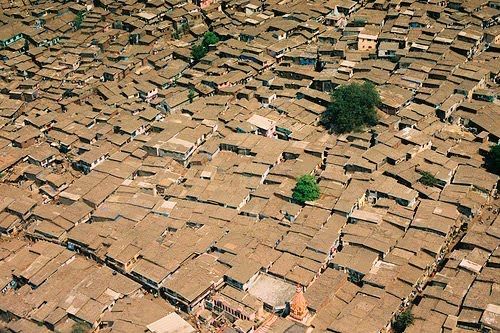 Roughly half the residents of Bombay live in crowded slums such as these.
Photo from bwillen

Sprawling over 175 hectares between Mahim and Sion, Dharavi has emerged as the largest slum of Asia inhabiting a population exceeding 600,000. Dharavi has its rival in Orangi Town in Karachi, Pakistan that has a notorious filth and expanse. Dharavi presents a brighter picture as a cheap pocket in the midst of expensive Mumbai where you could stay for as low as 4 US dollars rent per month. 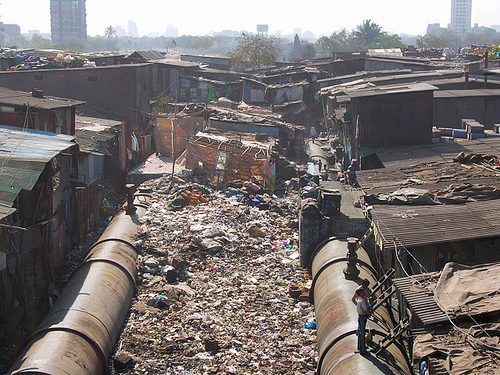 Dharavi, the most biggest slum of the world / Photo from sandrinecohen22

Dharavi is an abode for various small-scale industries like pottery, embroidered garments, leather and plastic goods. Unbelievably the total net income of the residents of Dharavi amounts to almost 650 million US dollars. But Dharavi is no paradise – its inadequate water supply and toilet facilities get worse during the monsoon floods and the unhygienic environment of Dharavi poses serious threats to public health issues. 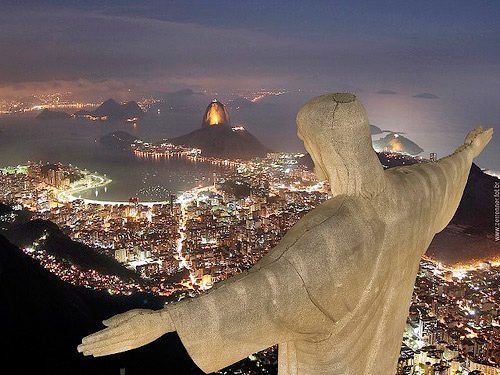 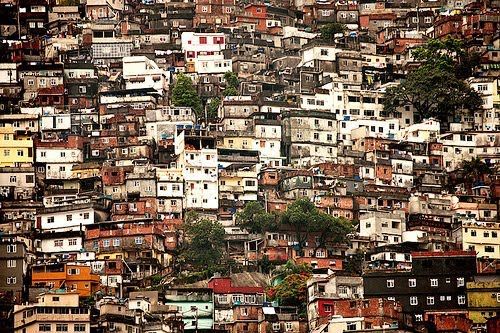 The largest favela (basically meaning shanty town) in Rio De Janeiro. / Photo from -bos[s]-?Situated between the São Conrado and Gávea districts of Rio de Janeiro, Rocinha meaning small ranch in Portuguese is the largest slum or ?favela? in South America. Posed on a hillside within one kilometer of the beach, Rocinha originated as a shanty to transform quickly into a modern slum neighborhood. You will find it better off than many shanties because of its brick buildings, sanitation, plumbing and other urban facilities. 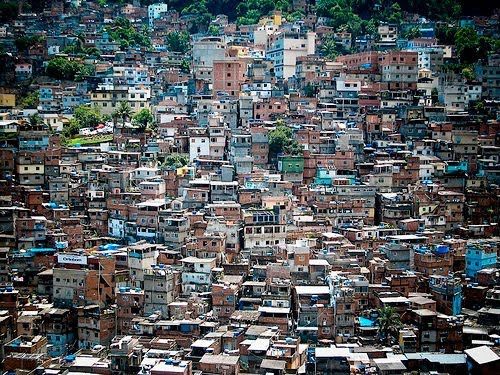 What makes Rocinha a potentially dangerous place to live is the prevalence of a violent drug trade. This leads to endless tussles and encounters between the drug peddlers and the police, giving rise to a dangerous ambiance. The population of 100,000 has a poor economic state and high mortality rates. What is more, Rocinha being built on steep mountain slope is susceptible to landslides, rock falls and floods. 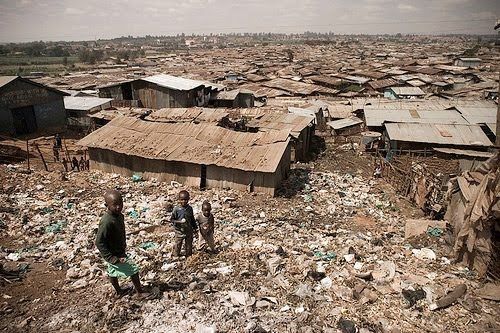 Kibera, meaning ?forest? in Nubian is the home for a million people, which earned notoriety for being the biggest slum in the whole of Africa. Most of the population here are tenants with no rights living in mud-walled shacks owned by landlords who have vacated Kibera. Most of the population is African Muslims, who huddle up eight per shack, often sleeping on the floors. 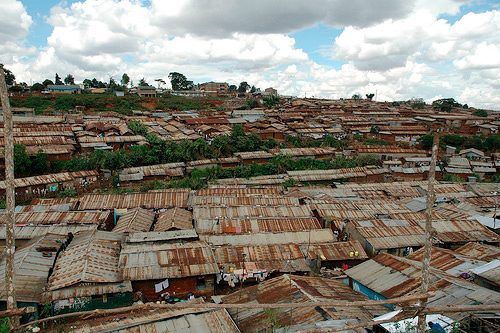 Just 20% of Kibera has electricity and no regular supply of clean water. The dam water that people use is the root to cholera and typhoid, aggravated by poor sewage condition. There is widespread menace of AIDS and the total absence of government medical facilities. What worsens the general livelihood of Kibera is the availability of a cheap alcoholic drink called ?Changaa?.
Faced with rampant unemployment, most of the slum-dwellers resort to Changaa early in life and grow into criminals, drunkards and rapists. The problem is aggravated by the availability of cheap drugs and tendencies of glue sniffing. The result is the rising rate of unwanted pregnancy among girls of all ages who invariably turn to abortion. Some charities and churches are working towards the betterment of the condition. 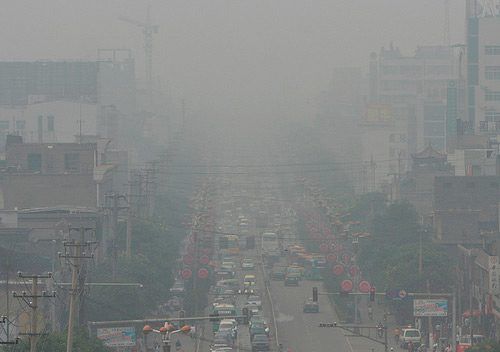 Located right at the center of Shanxi Province of China?s coal region, Linfen is one of the most polluted cities in the world. The air is thick with dust and smoke to a degree that hampers visibility. The three million people who live in Linfen take regular doses of arsenic rich water, further polluted with fossil fuels and poisonous gases through the air they breathe. You can actually catch a lasting stink when you step in Linfen with overflowing sewage everywhere. 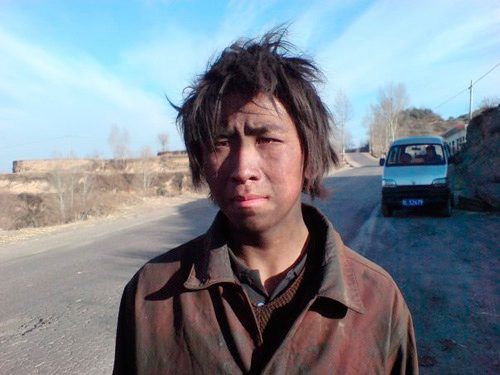 The river flowing by Linfen has its water thickened with oil. No wonder! The inhabitants using this water have high occurrences of cancer. When you look at the trees around the Linfen factories, they present a sad withered picture. It is the last place on earth that you would think of sending someone, even your worst enemy. 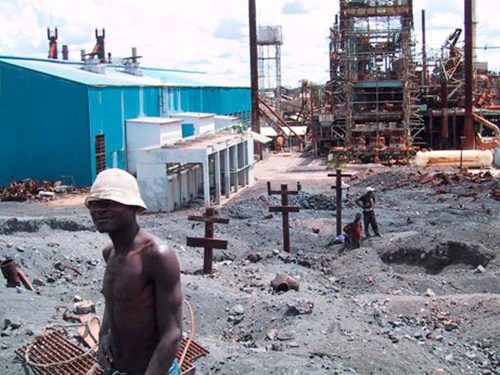 The lead and cadmium accumulations in this former British colony have skyrocketed since their discovery in 1902 when Zambia was valued for a rich lead mine. Although the mines have closed and no smelters are operational now, Kabwe residents have faced the threat of lead poisoning through decades. Blood tests in the children have revealed lead concentrations exceeding 5-10 times the normal limit that could turn fatal any day. Only recently, the World Bank has allotted funds for tackling the problem. 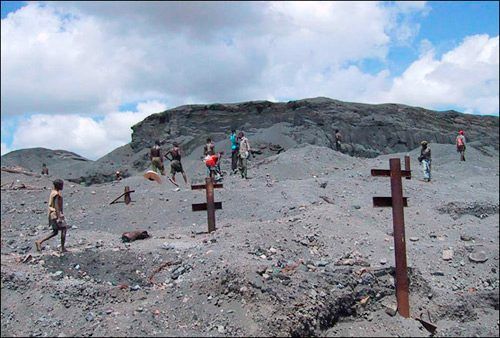 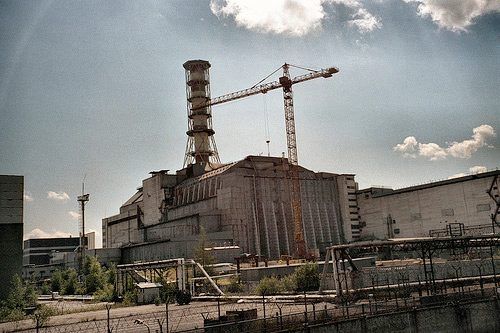 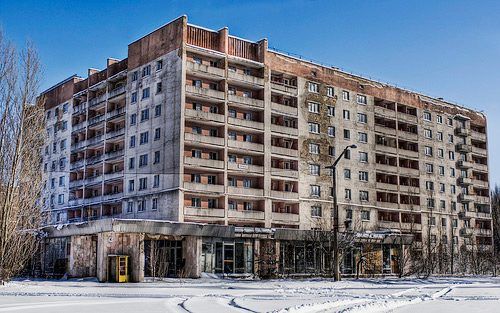 Talking of life-threatening pollution and poisoning, nothing could beat the nuclear reactor accident record set by Chernobyl that has left about 5.5 million people facing the threat of thyroid cancer. The fallout that occurred in April 26, 1986 has led to the leakage of nuclear radiation 100 times more pronounced in volume and effect than that of the Hiroshima and Nagasaki explosions. It is a horror that thousands of Russian, Ukrainian and Belarusian children living close to the damaged plant still cannot escape the radiation impact.

This used to be the public gym, back in 1986. / Photo from philippe simpson 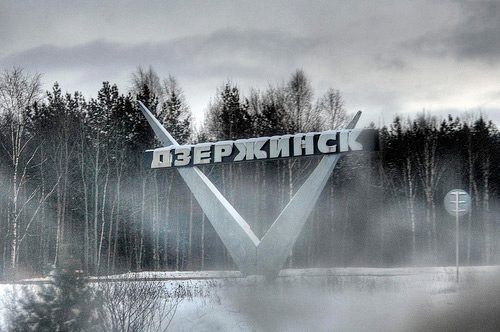 Dzerzhinsk / Photo from Oleg aka Xraboy

Situated beside the Oka River in Nizhny Novgorod Oblast of Russia, Dzerzhinsk is named after the Russian leader Feliks Edmundovich Dzerzhinsky. Right From its inception, Dzerzhinsk has remained a chemical industry hub and has been producing chemical weapons for Russia. It has been labeled one of the worst polluted cities of the world with a staggering death rate. 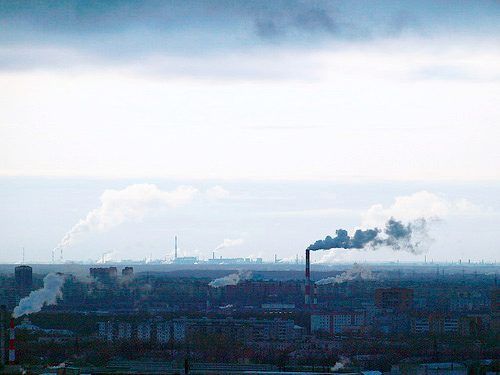 Skyline of Dzerzhinsk / Photo from Spendruleziya

In Dzerzhinsk, the average life of men is just 42 years and women 47 years. Environmentalists attribute such high mortality rate to the ceaseless production of organic chemicals like toxic dioxins, hydrogen cyanide, lead and sulfur mustard. The phenol and dioxin contents in the Dzerzhinsk waters surpasses the normal limit by seventeen million times. 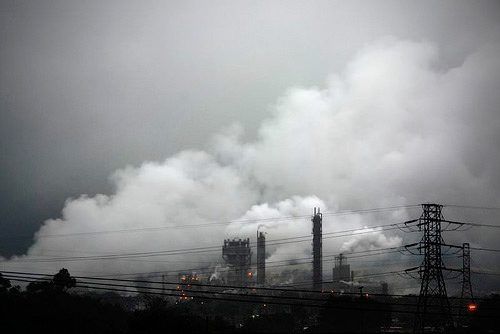 The city of Cubatão extending over 142 square kilometers is more appropriately known as the ?Valley of Death? for its precarious living conditions. It has a high air pollution level that has led to the destruction of forests over the surrounding hills and birth of children with congenital organ defects. 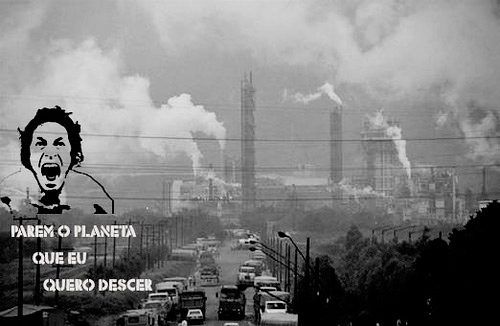 The life threatening pollution took a new dimension in 1984 when an event of oil spill burnt down the town, killing almost 200 people. Only recently extensive steps worth $1.2 billion are being taken to improve the damages caused by organic pollutants. Despite such measures, it is quite impossible to clean the soil and underground water from the spreading tentacles of pollution thus making Cubatão unfit for staying. 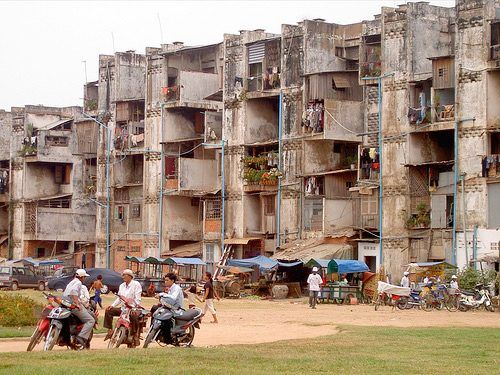 One of the architectural jewels of Cambodia, the innovative apartment complex designed in the early 1960s by Lu Ban Hap / Photo from Rich Garella 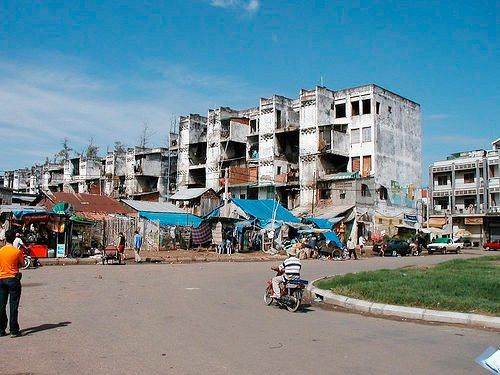 The 300-metre-long Basaac Apartments were built due to the town planning director Lu Ban Hap?s initiative to put up a low-cost social housing project in the 1960s. However, this government-financed housing project has been the home to 2,500 refugees since 1979, when its legal tenants vacated the property because of the onset of decay. The structure made of concrete and brick has now given way to dangerous gaps in between the reinforced concrete walls marked by the ingrowths of parasitic plants. The building can collapse any time burying alive its 2500 residents. 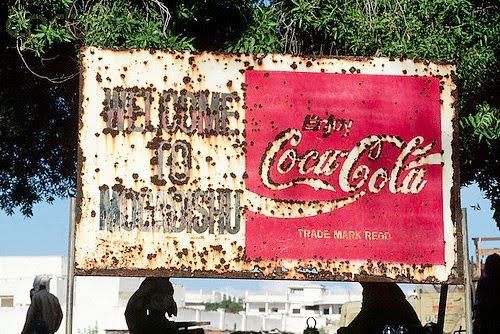 A rusty and bullet-ridden Coca Cola sign gives a telling welcome for visitors to the volatile city of Mogadishu. / Photo from khairi_us 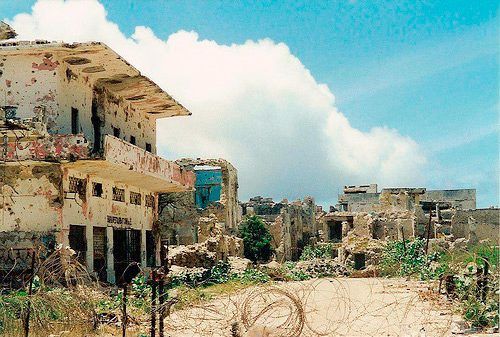 Pictures from an armed convoy trip in Mogadishu / Photo from ctsnow

Mogadishu, an advanced former port has been witnessing the 17-year tussle between rival military camps since the fall of the government in 1991. It turned into the most chaotic and anarchic city of the world, marked by civil unrest and insurgencies. Such disturbances caused its original inhabitants to flee, leaving Mogadishu to be controlled by military factions. Only recently, a new federal government has taken up the reins of control and is trying to re-establish law and order. 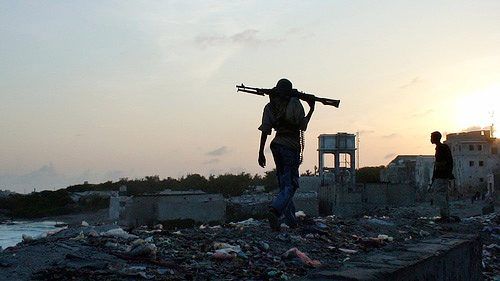 Photo from Kevin Sites in the Hot Zone