A day in the life of the city: Mesmerising photographs capture 24 hours in just one picture 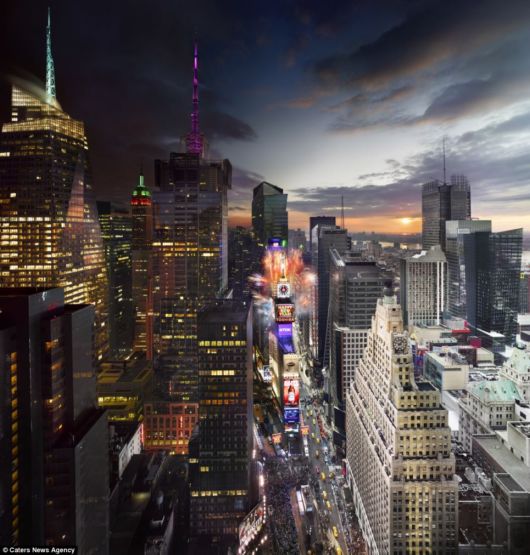 Time Square in New York is given a fresh new look in just one picture. The mesmerising image show the beautiful transition from day to night 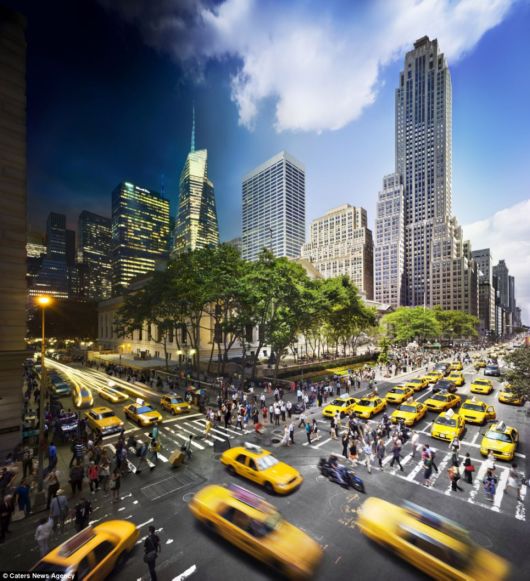 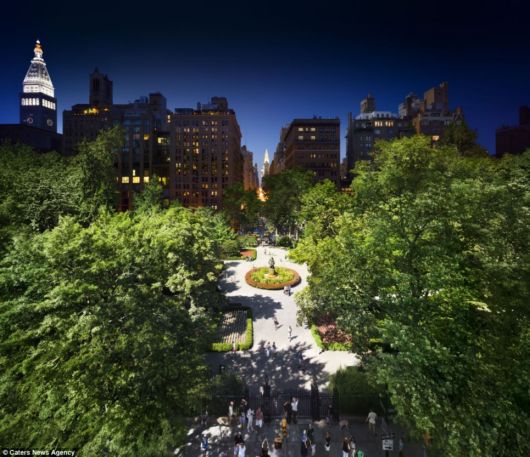 Santa Monica Pier in California has two very difference sides as this images shows – from the bright sandy beach with blue waves hitting the shore in the day to a bustling, illuminated pier at night
The unusual images were taken by photographer Stephen Wilkes who spent up to 15 hours and shot up to 1500 photos to create just one composite image.
The collection entitled Day to Night features 15 images including works from Times Square, The Western Wall and The Capitol.
To create the images, Stephen, 55, from Connecticut, U.S.A., shoots across the entire landscape from sunrise to sunset.
He then returns to his studio to blend around 50 of the best photographs to create one seamless image. Each piece takes around one month to edit. 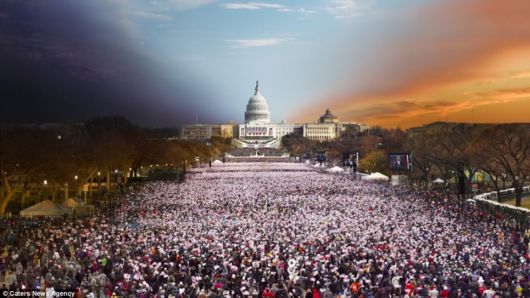 A day in the life of Capitol Hill, Washington DC: Although the crowds remain the same, the photographer captured the beauty of the changing light 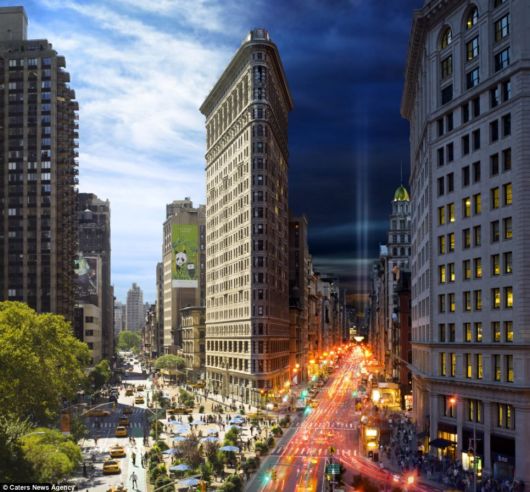 The Flat Iron building in New York looks like it’s dividing two different cities in this composition
Stephen said he first came up with the idea of shooting multiple images across a landscape when taking the cast picture for Baz Lurman’s blockbuster Romeo and Juliet for Life Magazine, in 1996.
But it wasn’t until he was asked to shoot the High Line for New York Magazine that Stephen used this technique to show the passing of time.
Stephen said while he is fascinated by architecture, people and the cities of the world, what he really loves to shoot is history. And he has even shot Day and Night images of President Obama’s inauguration speech as well as New Year’s Eve in Times Square.
There are currently 15 images in the collection but he is currently working on images from Chicago, and hope to add works from London and Paris in the near future.
Stephen wants to add as many images as possible to his collection. 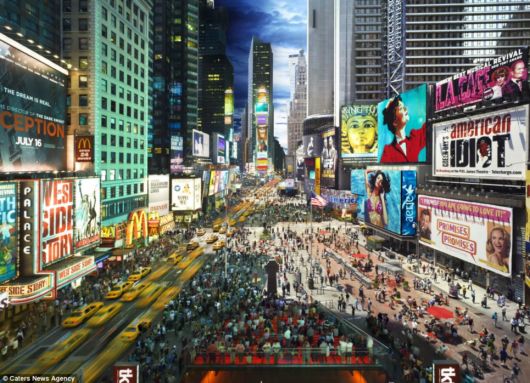 No matter what time of the day it is, New York is always heaving with people and always alight with adverts

Central park in New York shows how the beautiful and busy park can turn spookily quiet in the evening. Mr Wilkes frst came up with the idea of shooting multiple images across a landscape when taking the cast picture for Baz Lurman’s blockbuster Romeo and Juliet 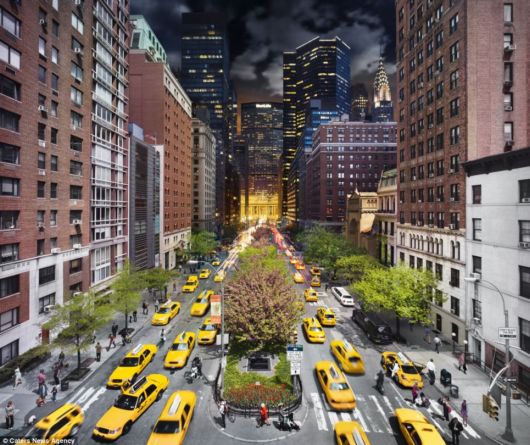 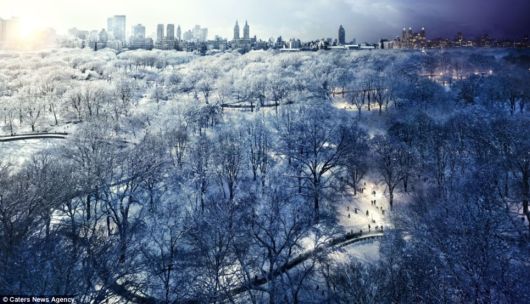 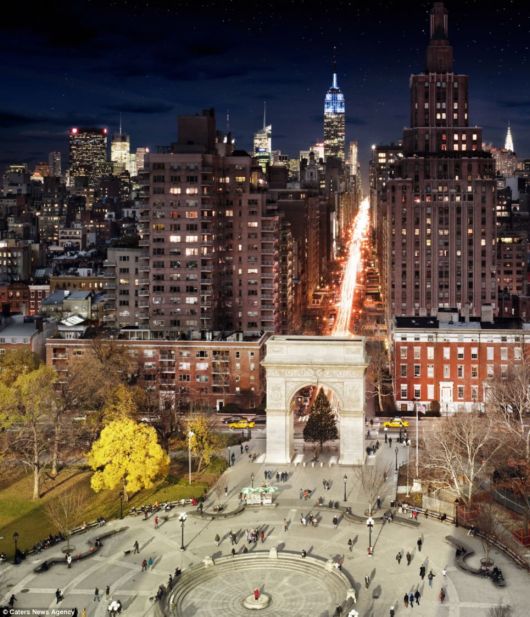 Washington Square Park is caught between the day and the night as part of Mr Wilkes unique way of capturing scenes
He said: ‘I remember saying that New York was very active and busy at lunchtime and very spooky at night.
‘I like to say it’s a labour of love for you to stay 15 hours and shoot 1500 images where most of the time there is no bathroom.
‘I am a street photographer by training and Day to Night is essentially all the things I love about photography; my son describes it as my symphony.
‘The images are so layered; there are so many elements that I love about the medium: Street, history, people environment, narrative, and storytelling.
‘I’m drawn to cities that have not only fantastic architecture, but also fascinating street life.
‘The human narrative is the subtext is in a lot of my photographs, so more you look at it, the more you are going to discover.
‘There is a layered effect so you will discover something new whenever you view it.’

Day to Night is a spectacular ongoing series by fine art photographer Stephen Wilkes featuring urban landscapes that transcend the confines of time by presenting day and night shots of iconic cityscapes in one image. Using up to 1,500 images from a 15-hour shoot day (from sunrise to sunset), Wilkes takes about a month to edit his shots into one composite image that reveals the gradience of time.

Each photo manipulation presents a striking look at a major city from the crack of dawn till nightfall. As natural sunlight washes over the brilliant, booming landscape and recedes to allow the artificial glow of the architecture and streetlights to take over the night sky, we’re given a sense of each city’s appeal throughout the course of a day. There’s also a rich sense of history and culture captured through the passage of time, reflected in each seamlessly transitioning shot. 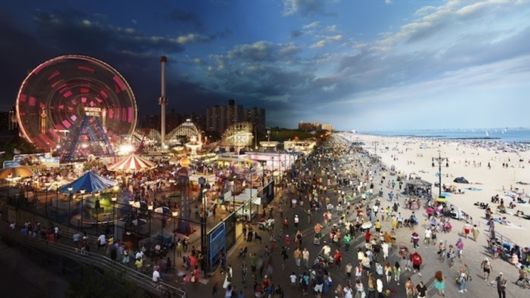 The photographer says,”The images are so layered; there are so many elements that I love about the medium: Street, history, people environment, narrative, and storytelling. I’m drawn to cities that have not only fantastic architecture, but also fascinating street life. The human narrative is the subtext in a lot of my photographs, so the more you look at it, the more you are going to discover.” Having already taken on some of the biggest cities?including New York City, Washington DC, and Shanghai?Wilkes looks forward to adding the iconic cityscapes of Chicago, London, and Paris to the growing series. 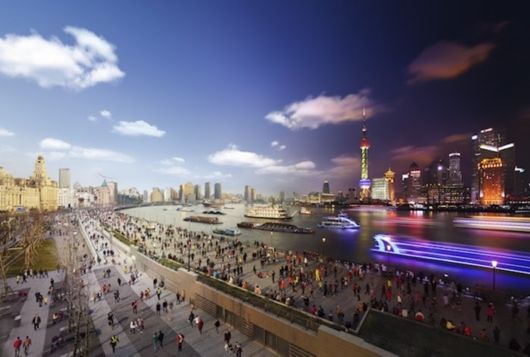