The little boy with the big cat: Heartwarming photos show life behind the scenes at Australia’s biggest animal circus

Some children have a little pet cat – but Braxton West-Smith has a little big cat to play with.

The three-year-old trainee lion tamer is of the latest generation to join Australia’s family-run Stardust Circus.

His best furry friend is an African lion cub called Zimbi, who will one day take his place under the lights of the big top too. 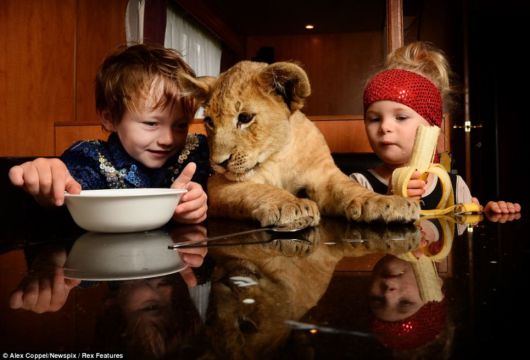 I like milk too! Zimbi the lion cub peers into Braxton West-Smith’s cereal bowl as they have breakfast with Pesaus West in their mobile home. The young trio are part of the family-run Stardust Circus in Australia, which is the country’s biggest animal circus, featuring lions, monkeys, horses and miniature trick ponies 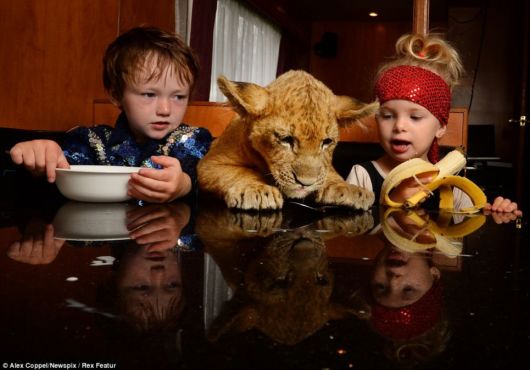 I only wanted a lick: Zimbi appears to peer forlornly at his reflection in the shiny table top. Stardust insist they use only the most humane methods to train their animals 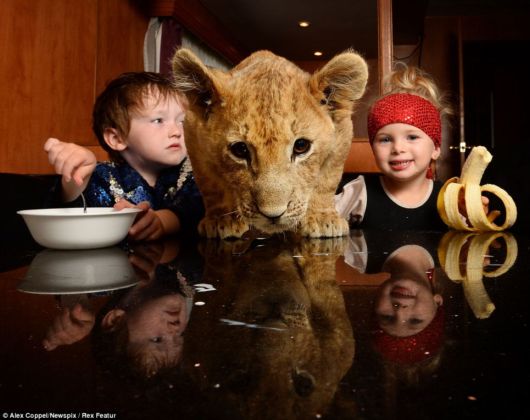 Have YOU got anything for me? Zimbi looks ready to leap right from the frame as he clambers towards the photographer 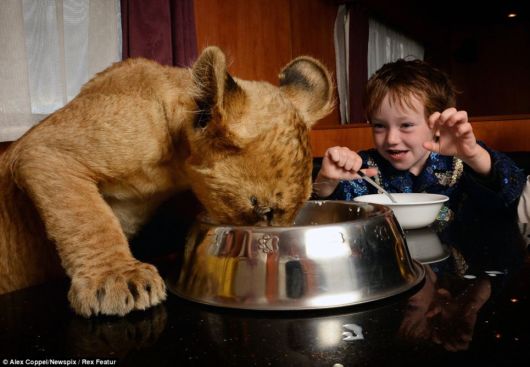 There’s my breakfast! Zimbi chows down while Braxton makes a claw gesture in the background

Stardust is Australia’s largest animal circus, in an era where the use of animals in such spectacles is increasingly under scrutiny.

Travelling across the vast country, from outback towns to coastal cities, they carry with them performing animals including lions, monkeys, horses and miniature trick ponies.

They insist they only use the most humane techniques to train their beasts.

‘Our animals have been trained with the reward method, and are treated as part of this large family,’ says the Stardust website.

As these pictures show, baby animals are treated little different from baby humans by the family-run circus.

Zimbi shares breakfast and playtime with his young human handlers, they train together and, at the end of a long, tiring day, he has his own – rather scratched – armchair to relax in. 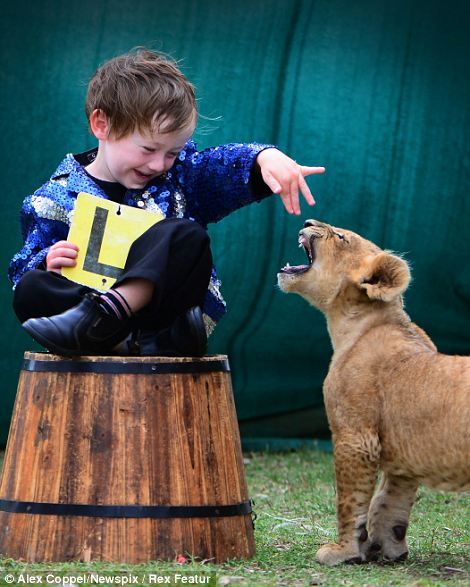 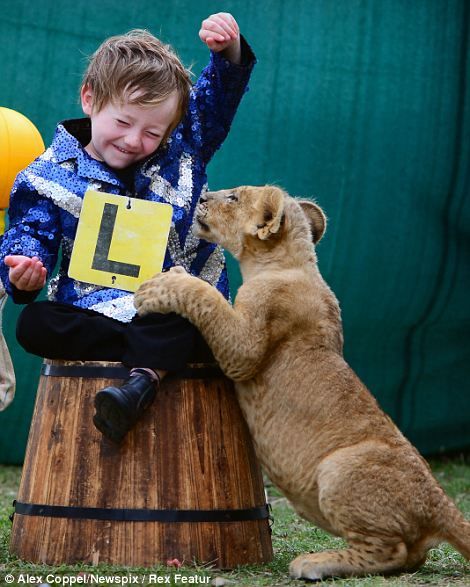 Playtime: Braxton and Zimbi train together. But the boy says he wants to train goats – not lions – when he’s old enough to join his mother and father in the circus 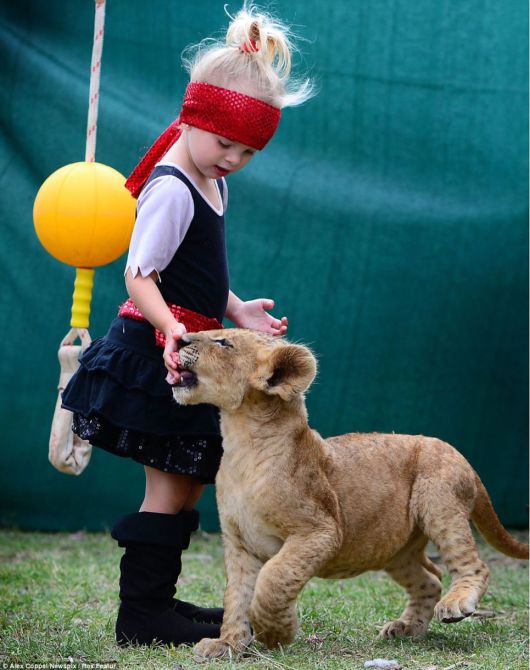 This is how you do it: Fearless Pesaus feeds Zimbi a chunk of meat from her hand

But how long such an existence will continue is uncertain, as opposition to animals in circuses grows in Australia.

Thirty animal activists turned up to a performance of Stardust Circus in Dingley Village, Victoria, just three days ago, and the popularity of groups in the country which opposes animal acts seems to be on the rise.

Rules about circuses vary from state to state, with most requiring owners to apply for permission to exhibit their animals. 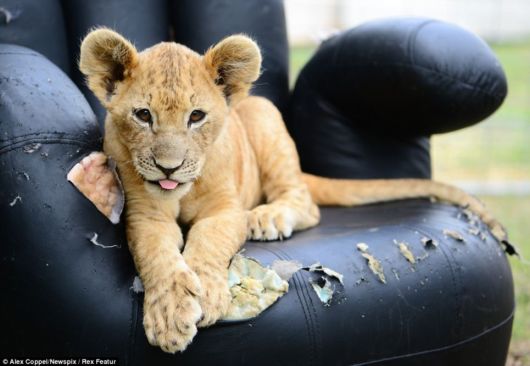 Get that cat a scratching post! Opposition to animals in circuses is growing in Australia and just days ago Stardust faced protests as its performers put on a show in a town in Victoria. Thirty animal activists turned up to a performance of Stardust Circus in Dingley Village

Nevertheless, an activist speaking on an Australian animal rights forum about a visit to Stardust Circus found little evidence that their creatures were being mistreated.

Rana Hales of the Caroline Springs Animal Welfare Network said the owner Janice Lennon was more than happy to show her and a fellow activist around their camp site.

‘On seeing the animals, they all appeared to be well fed and watered,’ she said in the 2009 forum post, before going into details about the manner in which the creatures were kept. 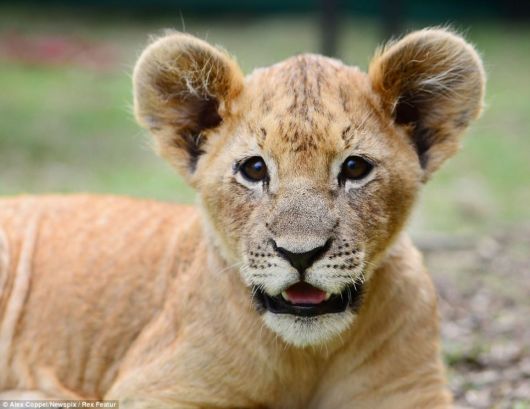 Little savage: Nevertheless, an activist speaking on an Australian animal rights forum about a visit to Stardust found little evidence their creatures were being mistreated

But little Braxton isn’t thinking about the possible future legal environment surrounding his family trade – he just wants to follow in the footsteps of his forebears.

Braxton’s father trains most of the animals at Stardust Circus. His mother performs with the ponies, and also on the trapeze.