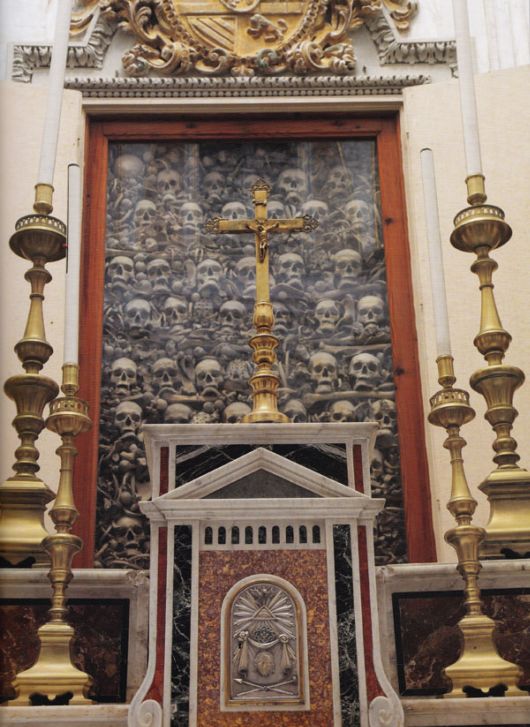 In the Ossuary Chapel of the Cathedral of Otranto, Italy, the remains of the victims of a massacre in 1480 preside over the high altar straddled by rich gold candlesticks. 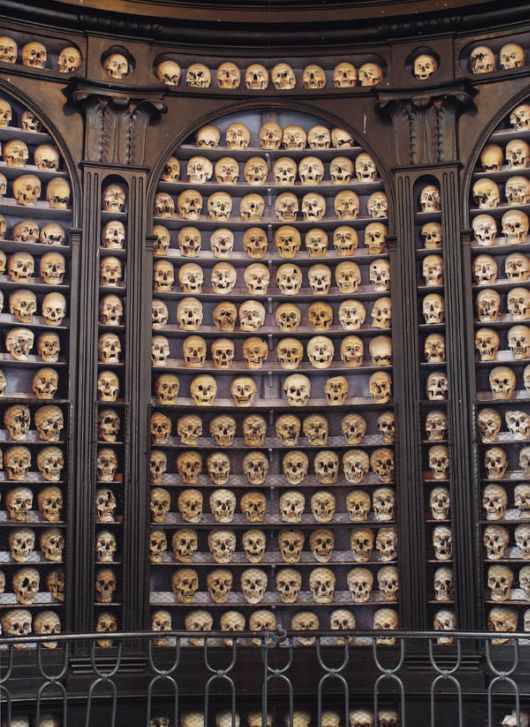 The Ossuary Chapel of San Martino Della Battaglia in Italy is the most ordered of all the bone houses on this list. Row upon row, column upon column of human remains rest in perfect order as if they were books in a macabre library. In all there are 2,619 deceased here with 1,274 skulls. 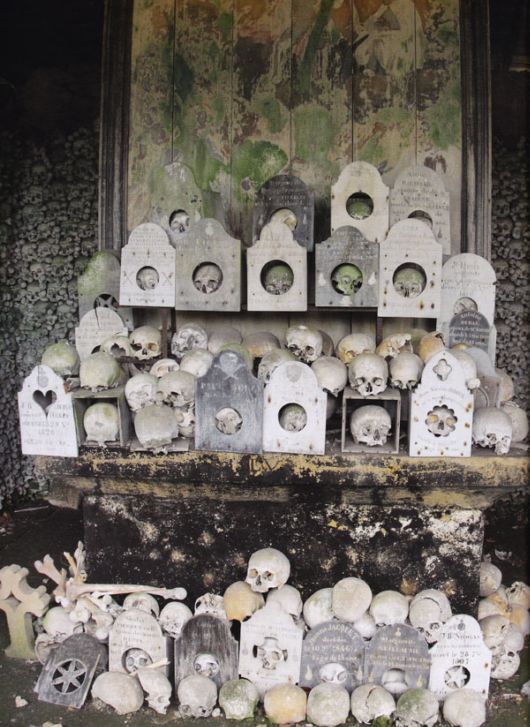 By no means the most extravagant collection of bones on this list, the St Hilaire cemetery in Marville, France gets its beauty from simplicity. It is unique in that may of the skulls are housed in small cabinets inscribed with funerary inscriptions. 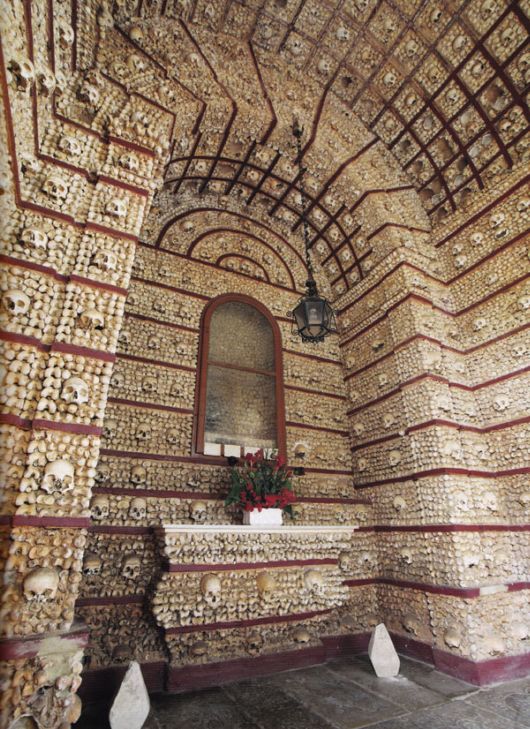 The Chapel of Bones is in the Church of Nossa Senhora do Carmo in Faro, Portugal. In addition to the walls and ceilings of bones of members of the religious Carmelite order, death is even found underfoot where the paving stones are headstones for the deceased priors and local dignitaries. 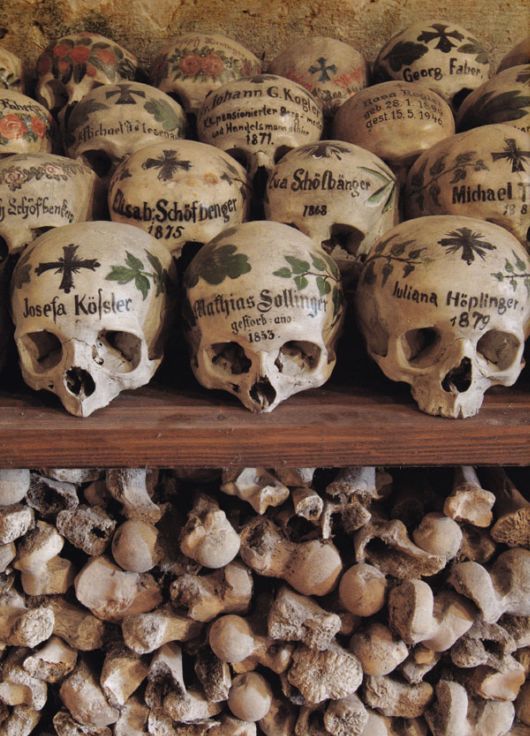 The skulls at the Chapel of St Michael in Hallstatt, Austria are famous for having been painted. The painted skulls are almost all male as they were outlived by their wives who would decorate them. Unfortunately the wives? remains were left to their children who were less concerned with decorating the dead so they remain unpainted. 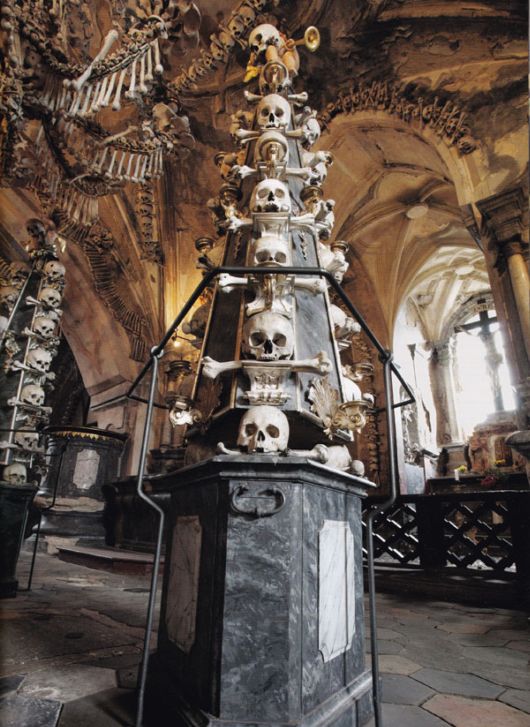 The Sedlec Ossuary (Ossuary of All Saints) in the Czech Republic is one of the most famous bone houses in the world. It doesn?t just lay the bones to rest ? it uses them as extravagant deathly decorations. It is especially famed for the huge chandelier made entirely of human remains ? part of which can be seen in the top left of this photograph. 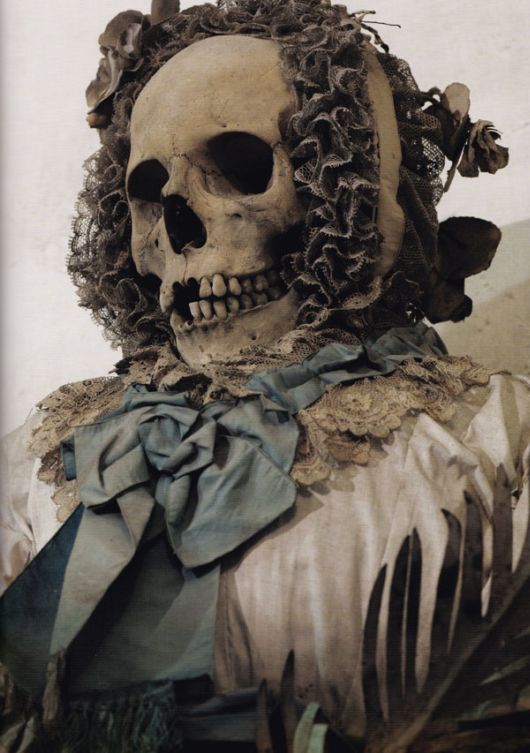 This bonneted lady can be found in the Chapel of Virgins in the Crypt of the Monastery of Santa Maria Della Pace in Palermo, Italy. She is one of four virgins placed on a ledge holding palm fronds signifying the triumph of faith. 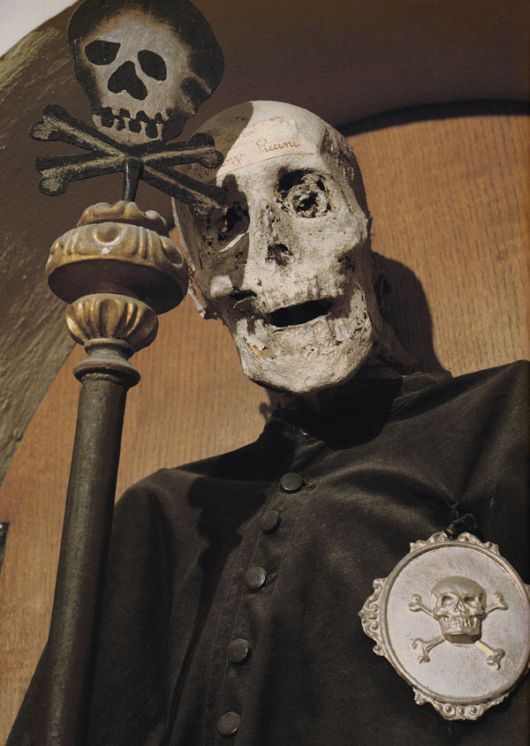 VinceNzo Piccini is the only clothed mummy in the Chiesa Dei Morti of the Confrternity of Buona Morte in Urbania, Italy. He is dressed in the robes of the religious order he was a member of and he wears the silver badge of death. 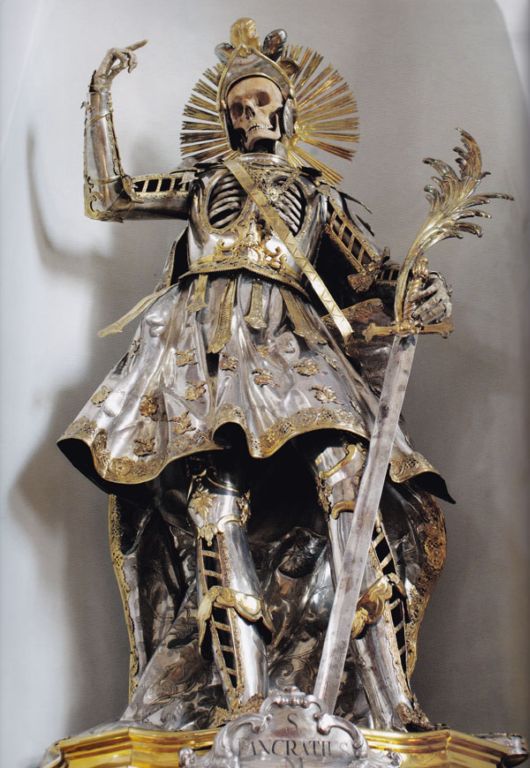 The Bones of St Pancratios are found at the Church of St Niklaus in Wil, Switzerland. He was originally robed in clothes by nuns in the late 1600s but in 1777 ? the centenary of his bones arriving in Wil ? he was dressed in this magnificent commissioned suit of armour. 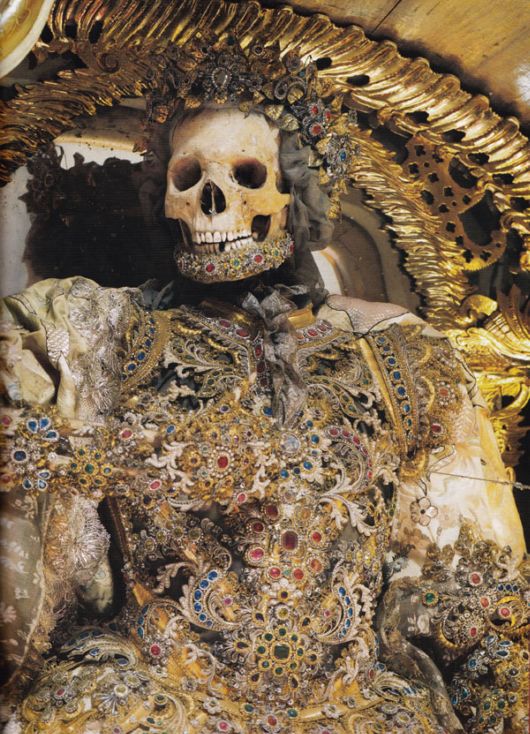 St Gratianos is enrobed in rich jewels and fine fabric befitting his state as a martyr. It is known he died for his faith because his bones stand above a chalice filled with dried blood. His remains are on display in the Basilica of Waldsassen in Germany.