All eyes to the skies: Hundreds of elaborate designed kites fly high above Bristol at international festival

Some of the world’s largest and most spectacular kites filled the air at the Bristol International Kite Festival this weekend.
Now in its 26th year, the festival continues to be a popular and colourful attraction that attracts guests from all over the world.
Giant 3-D creatures such as a dragon, a pouncing tiger and a massive whale joined action-packed ‘rokkaku’ kite fighting battles, synchronised stunt routines, and even parachuting teddy bears. 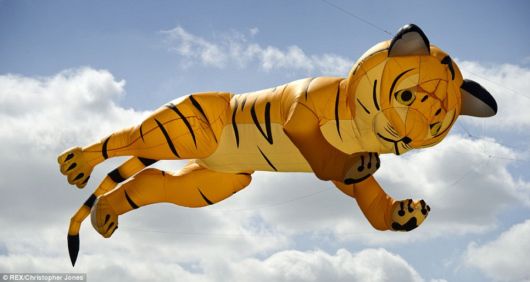 Mid-leap: A tiger takes flight at Bristol International Kite Festival this weekend. The event has been running for 26 years and attracts thousands of people 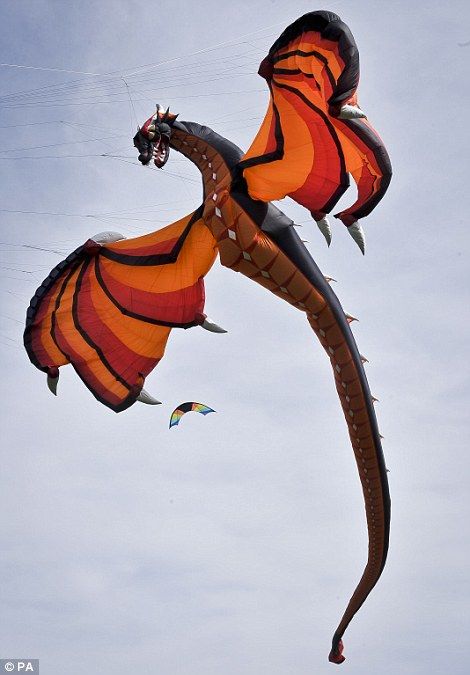 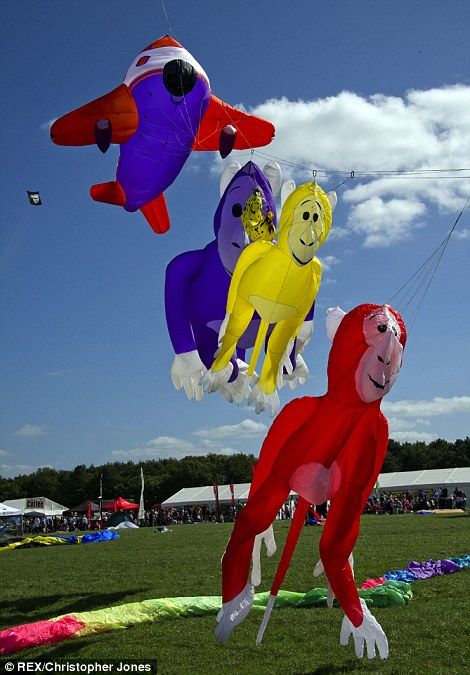 Fearsome: A huge dragon looms over the crowds (left) while a trio of brightly-coloured primates take flight with the help of a plane (right). The festival is known for the painstakingly-crafted kites
Over the years the festival has welcomed guest flyers from America, Australia, New Zealand, Japan, Malaysia, China, Israel, and many countries in Europe, as well as a regular contingent of the best of British flyers and supporters.
This year it featured the official Guinness World Record holder for the world’s largest kite – a colossal 3D Kuwaiti flag the size of an Olympic swimming pool.

When laid out flat on the ground the kite measures 42m x 25m and has a lifting area of 1,019 square metres.
This extraordinary kite was commissioned by the Al Farsi family of Kuwait and made in New Zealand by kite maestro and regular Festival guest Peter Lynn. It is made from over 2,500 sq m of specially woven, high performance rip stop nylon and took 750 hours to build. 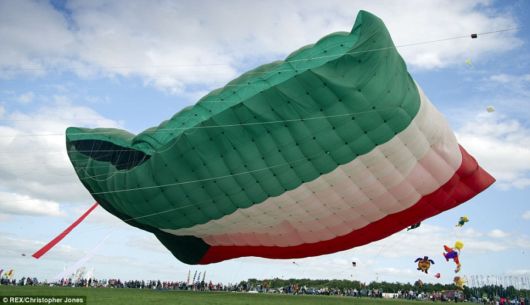 The Al Farsi kite in the colours of the Kuwaiti flag, which is the largest kite in the world, according to the Guiness Book of Records 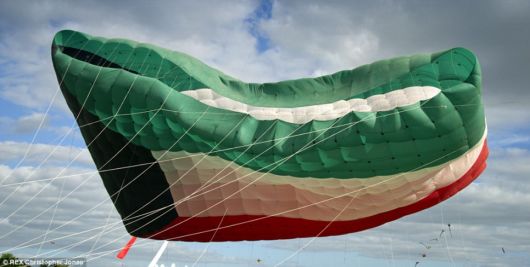 Epic: The kite was made in New Zealand and took 750 hours to build 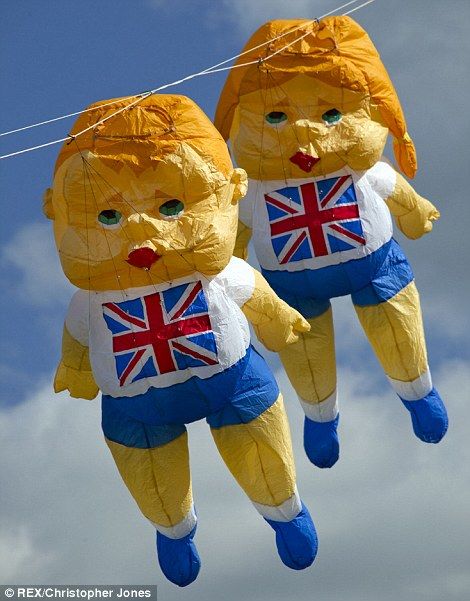 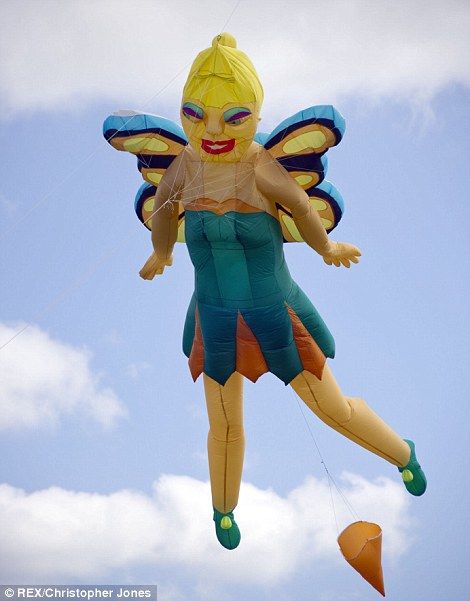 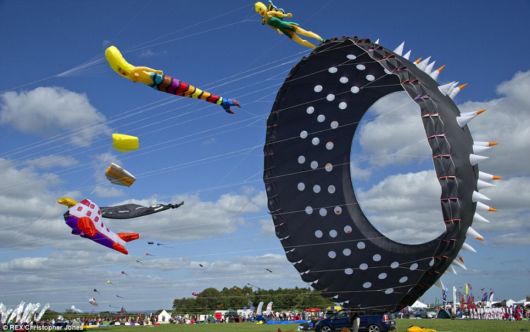 An enormous spiked black dome twirls in the wind on the grounds of the Ashton Court Estate It has no internal spars or frame but inflates with air to take its shape and requires a main flying line that can handle a staggering 20 tonne breaking strain.
Bristol International Kite Festival was the brainchild of three friends, Martin Lester, John Peyton, and Avril Baker. Lester and Peyton were designers and kite enthusiasts who had worked together at Bower Ashton College of Art & Design, in Bristol and Avril was working in public relations and marketing.
Following a successful flying display they put on for a local council event the three decided to stage a proper kite festival. The first event had a budget of £300. It is now one of the region’s biggest events and hosts thousands of visitors.
The event also raises money for the Great Western Air Ambulance Charity and is currently trying to generate £250, 000 for a new helicopter. 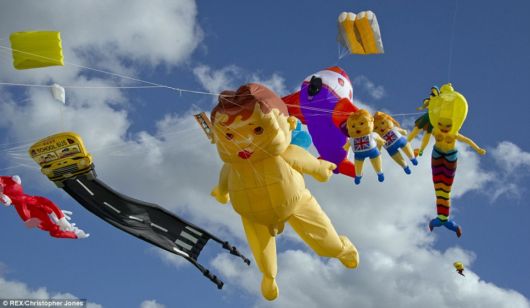 Diaspora: A few of the odder and more risque creations 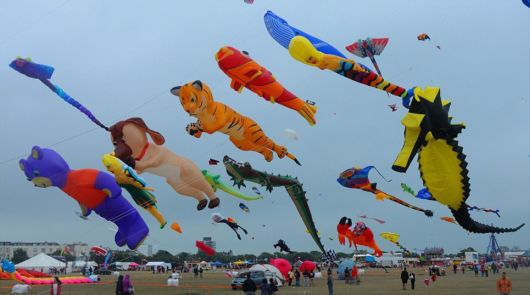 Over the years the festival has welcomed guest flyers from America, Australia, New Zealand, Japan, Malaysia, China, Israel, and many countries in Europe 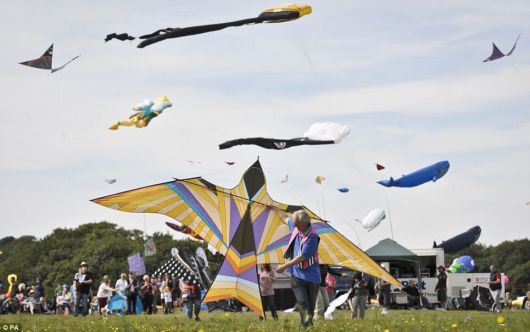 A man prepares to launch a bird-shaped kite at festival, which is one of Europe’s largest kite events 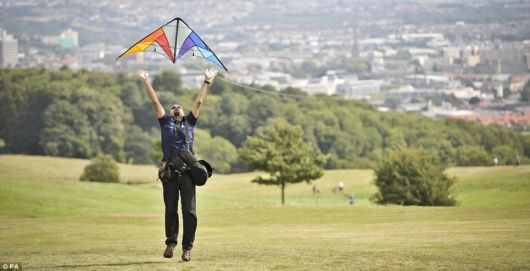