Forget the old joke which starts ‘my dog has got no nose…’ – Duo the Staffordshire bull terrier has two.
Staff at Newcastle Dog and Cat Shelter are having problems finding a home for the three-year-old because of his unique appearance caused by a harelip.
The dog, named Duo by shelter staff, was handed in to them by police after apparently being lost or abandoned.
Staff at the shelter said vets had not seen a harelip to such an extent in a dog before.
Head of fundraising Michelle Pyle said: "We’ve had a few people come and see him and say he’s a freak.
"Duo is not a freak, he’s just unusual. Not many people can say they’ve got a dog like that." 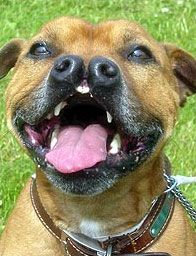 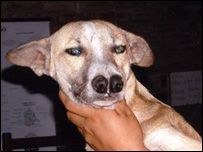 Xingu is said to be intelligent and fond of salty biscuits 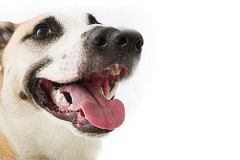 This is Xingu, the two nosed dog, who was found living in a village deep in the Bolivian jungle by explorer Colonel John Blashford-Snell.

He is an Andrean double-nosed tiger hound and is thought to come from a line of hunting dogs used because they have an amazing sense of smell thanks to their dual noses.

Tests on the dog proved that it was not a physical malformation but a specific breed of double-nosed dog.

Colonel Blashford-Snell’s theory is that the dog is descended from hunting dogs found in Spain at the time of the Conquistadors.

"I think it’s highly likely some of these were taken to South America and they’ve continued to breed," he said.

"They’re very good hunting dogs. Xingu was quite an aggressive little chap, about 15" to 16" in height and very friendly with us, and he loves salt biscuits."

Xingu sired two puppies who were born with four noses between them. The puppies unfortunately did not survive.