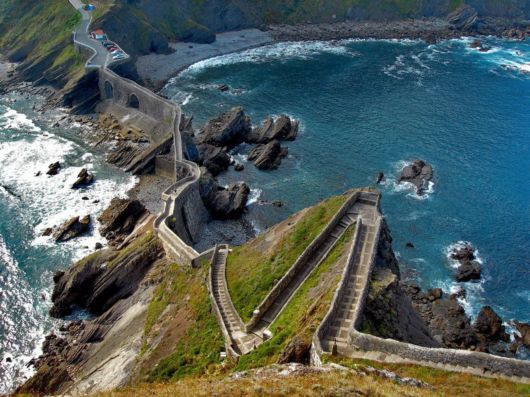 1. On a mountain hilltop Spanish island Gastelugache is an exceptionally beautiful and picturesque staircase of 237 steps. It was built in the tenth century and led to the old hermit’s hut. To fully enjoy the beauty of these places is best to come here in the spring or autumn. In the summer there is usually very crowded and noisy. 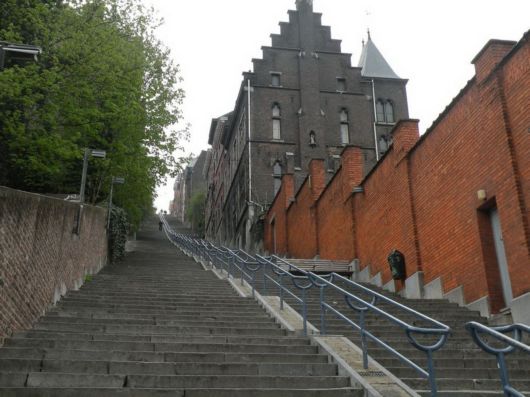 2. "Mount Buren." This title is a staircase built in 1881 in Liege. With the help of her military guarding the city from attacks by the enemy, could safely go down the hill in the center. Stairs perfectly preserved to this day. To those who will master all 374 steps, a splendid view of the city and the river Maas. 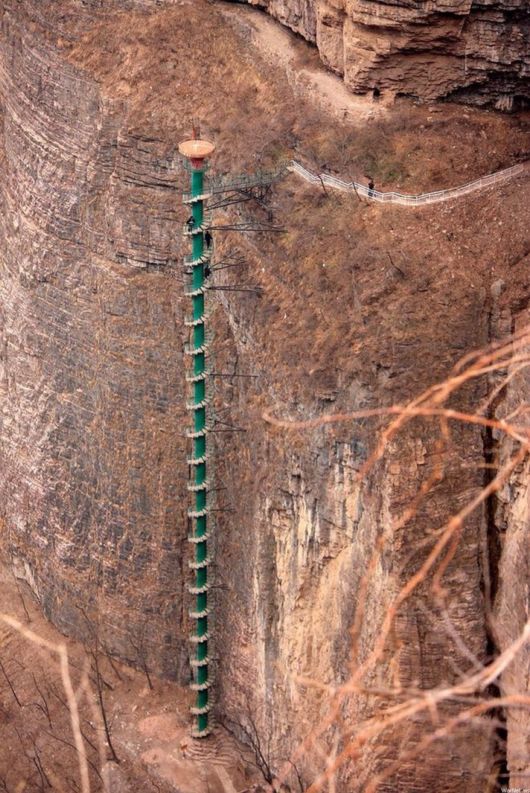 3. Spiral staircase height 95.1 meters installed in China along the mountainside Tyayhan in Linchzhou. Walk the stairs, of course, will appeal to all lovers of "tickle nerves" and novice climbers. But before starting the descent to fill a number of forms and documents that will confirm that you do not yet sixty, and you do not have problems with the heart or lungs. This is done for security and avoid health problems. 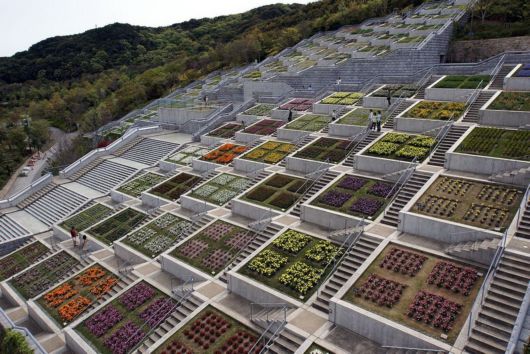 4. Japanese Memorial Greater Hanshin – is a garden with an unusual and complex landscape design. It was set up on the hillside of the island of Awaji and has a height of one hundred levels. At each level there is a beautiful flower bed and stairs. 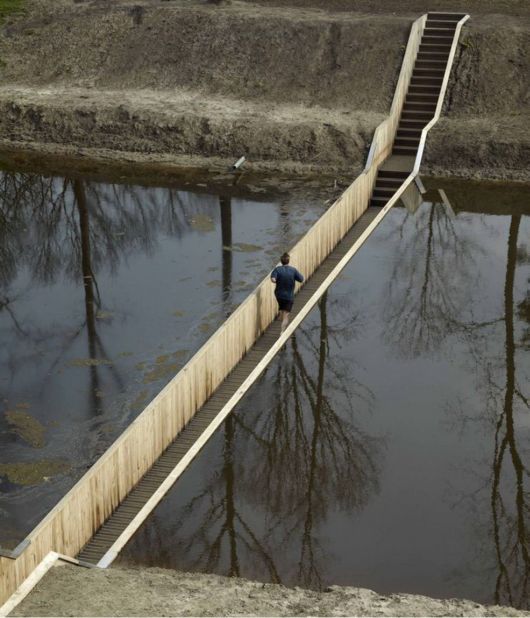 5. Fort de Ruver was built in the seventeenth century. For protection from the enemy trench dug around it, which is only partially filled with water. The depth of the pits was that the boat sank in the mud, but also on foot to pass it was not possible. A few years ago, after the castle was opened to the public to solve the problem with the crossing. To preserve the history of this place and do not spoil the general view of the architects suggested a very original idea – bridge to drown in the water. The edge of the water is almost identical to the upper part of the bridge and makes it completely invisible from a distance. The unusual design was called “The Bridge of Moses.” 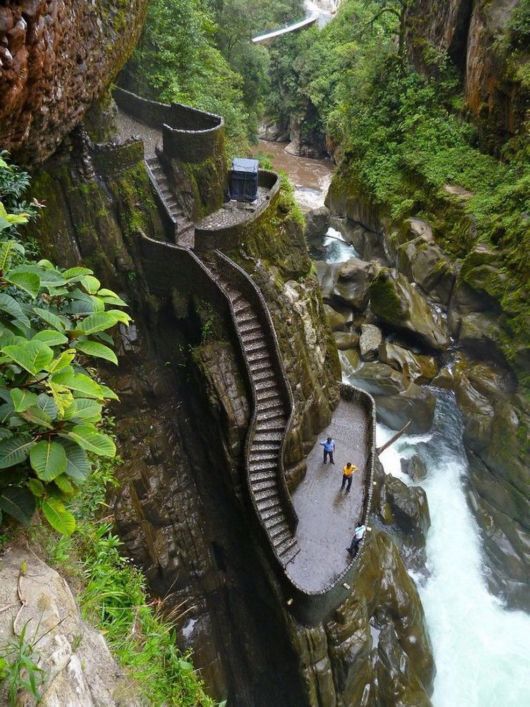 6. The famous staircase leading to the canyon, located near the big waterfall Pailon del Diablo (Ecuador). This is one of the major local attractions. So, if you ever want to visit this country, do not forget about this scenic descent into a thirty minute drive from Banos. 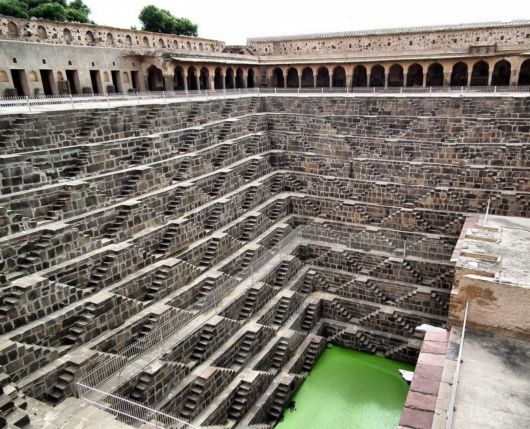 7. In a village near Jaipur Abaneri is unusual ancient well Chand Baori. The building was built in the year 800, and consists of 13 spans from 3500 narrow steps. This area is very dry, so the builders gave the well shaped to maximally preserve precious moisture. At the bottom of the well temperature is always about five or six degrees below, so the locals would often come here to rest during the heat wave. 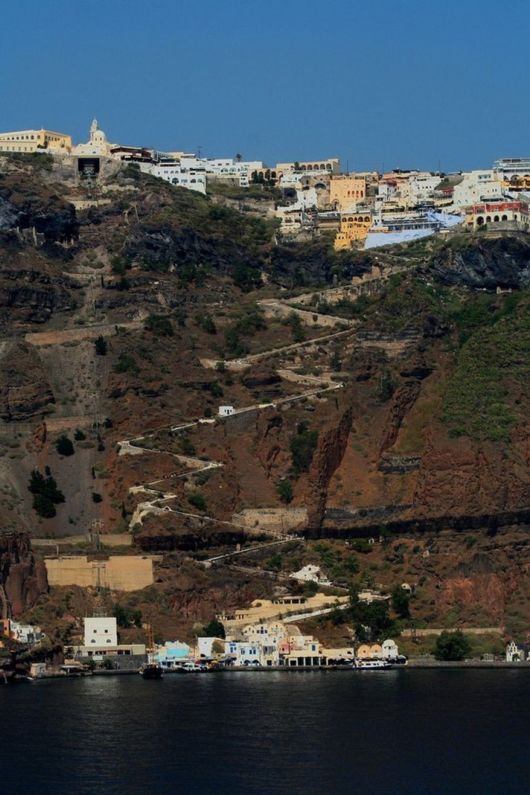 8. To facilitate the way from the coast to the city and back to the people of the island of Santorini in 1715 built a steep staircase directly in sheer hillside. Because of the terrain has turned the whole length of the stairs of 1300 meters. To overcome such a long way under the force was not to everyone, so people usually use donkeys to lift cargo and passengers. In 1979 he was installed rope ladder, but many tourists prefer, as before climbing the picturesque hill sitting on a donkey 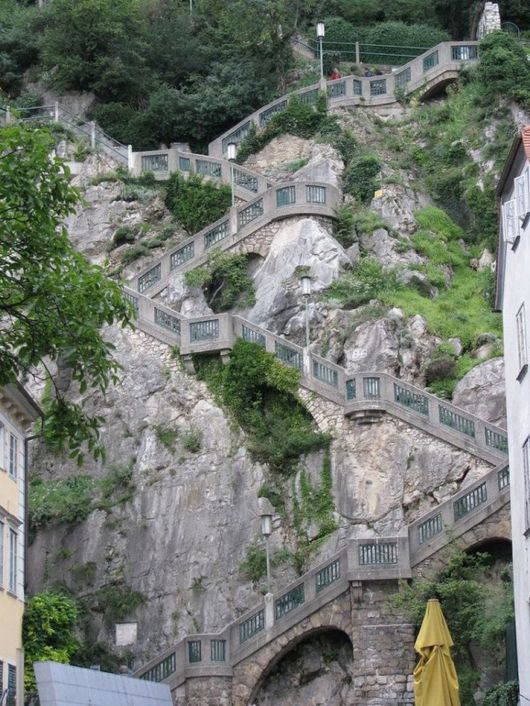 9. From all points of the Austrian city of Graz visible ancient tower Schlossberg. Staircase leads to it an impressive size, carved directly into the rock column. 260 stair steps to overcome the strength to almost everyone, but anyone can take advantage of, and a lift. Before the tourists climb to the top of the mountain, an unforgettable view of the city. 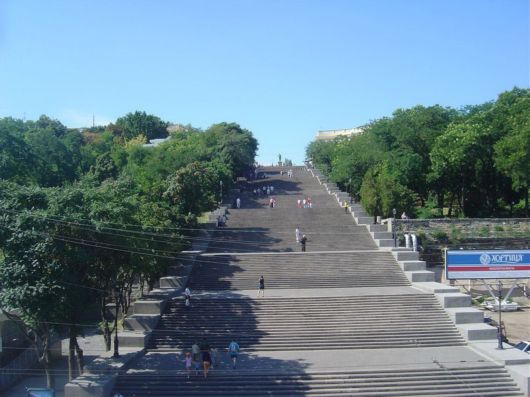 10. Potemkin Stairs – one of the most famous hero-city of Odessa. Originally it was called ladder Richelieu. In many modern guidebooks describe it as a formal entrance into the city from the sea. The total length of ladder 142 meters and a height of -27 meters. 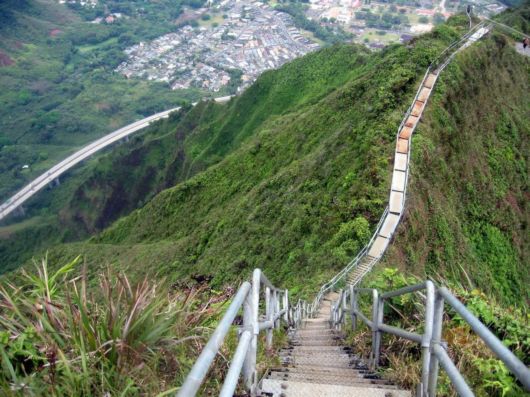 11. Celestial Haiku Stairs is set on the Hawaiian island of Oahu in 1942. Its construction was caused by the need to ensure the uninterrupted line of communication to the naval station, located at an altitude of 850 meters. Restoration of stairs in 2003 cost the local authorities to 875,000 dollars. But for visitors to this facility has remained closed. 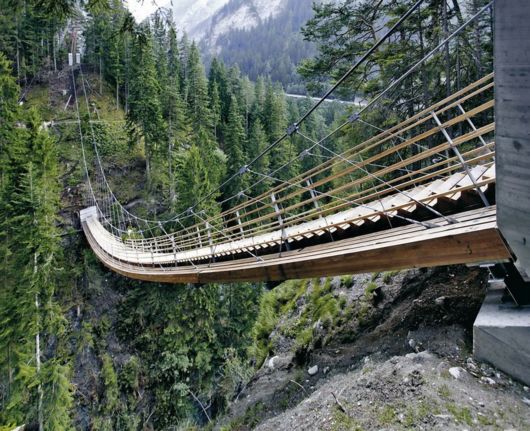 12. Engineers Dzhyurg Konzett and Rolf Bahofner joined multilevel Traversinertobel slopes in Switzerland, has developed a sophisticated in design ladder-long bridge fifty six meters. The difference between the two heights of nearly twenty-two meters. Previously they put together a rope bridge, but it was destroyed by a landslide. 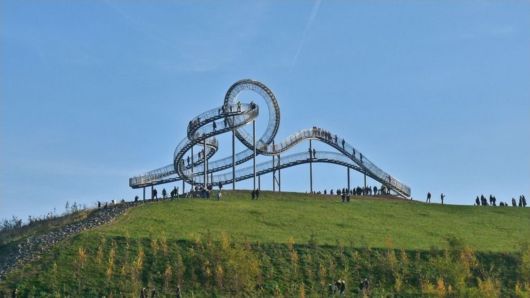 13. Metal staircase with the original name of "Tiger and Turtle" is located on the slope of Duisburg (Germany). The construction of twenty-one meter in height has a complex spiral shape. Visitors can stroll through the maze of stairs, but take it all the way from one end to another will not work. Since the central part is a dizzying “loop.” 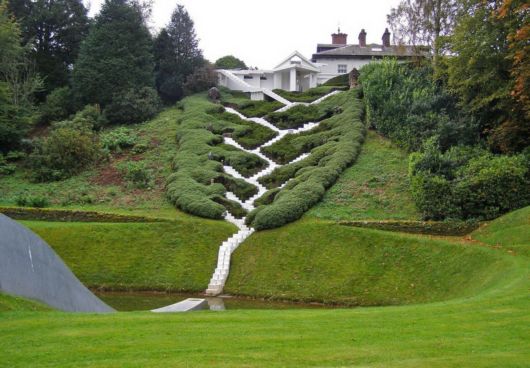 14. On the slope along the gardens of Dumfries in Scotland is the scenic Cascade universe. Big steep steps start right from the pond and lead to a beautiful pavilion at the top. Each flight of stairs separated from each other by a large observation deck with comfortable benches. Here you can relax and enjoy the scenery opening. The gardens are privately owned. Therefore, only once a year, this place is open to visitors.