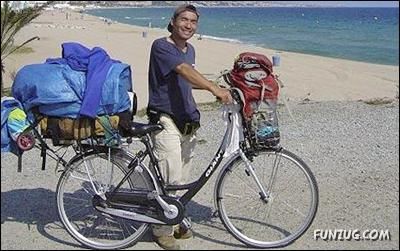 Keiichi Iwasaki travels through 37 countries on just £1. Keiichi Iwasaki , 36, left on his Raleigh Shopper bicycle in 2001 to go on a tour of Japan. But he enjoyed himself so much he caught a ferry to South Korea and since then has cycled through 37 countries without returning home.
He has been robbed by pirates and arrested in India, almost died when he was attacked by a rabid dog in Tibet and nearly married in Nepal. In total Mr Iwasaki has cycled over 45,000km (27,961 miles) on his favourite Raleigh shopper bikes but two have been stolen and two have broken so he now rides his fifth. His biggest achievement is climbing the world’s highest peak Mount Everest, which stands at 8,848 m (29,029 ft), from sea level without using any transportation. Mr Iwasaki, originally from Maebashi, Japan, says that only his ”strong will” has kept him going. He said: ”Most travellers and adventurers need money but instead of giving up an opportunity to travel the world I want to clarify that dream can come true if you have a strong will. ”I have been travelling for eight years and I continue to do so from money I receive from performing tricks. I do not carry a credit card or traveller’s cheque. ”My strong will is very important and I hope this trip will prove that. I wanted to travel the world in my early twenties, but I have not been able to do so until I was 28. ”I thought to myself that ‘My life will soon be over before I do what I want to do!’, so I decided to start this trip. ”I didn’t want to use aeroplanes because I wanted to see and feel everything with my own skin. With bicycle, I can always feel the air and atmosphere of the place.” Mr Iwasaki left home on April 15 2001 with just 160 yen, around £1, in his pocket after he became bored working for his father’s air-conditioning company. He rode around Japan for one year before buying a one-way ticket to South Korea in March 2002. Since then he has travelled the world on his Raleigh Shopper bicycles and funded his travels by performing magic tricks. In May 2005, he became the first Japanese man to climb Mount Everest from sea level without using any transportation. He has also rowed from the source of the Ganges river in India to the sea, a journey of 1,300km which took him 35 days. Mr Iwasaki is currently in Switzerland waiting to climb Europe’s highest peak, Mont Blanc. Following this he plans to travel to Africa, across to South America and then make his way back to Japan for the first time in over a decade via North America. He believes this will take him five years before he begins to write a book about his trip. Countries Mr Iwasaki has visited: South Korea, China, Vietnam, Cambodia, Thailand, Malaysia, Singapore, Laos, Nepal, India, Bangladesh, Pakistan, Iran, Azerbaijan, Georgia, Turkey, Greece, Bulgaria, Macedonia, Albania, Montenegro, Croatia, Bosnia & Herzegovina, Serbia, Hungary, Slovakia, Czech, Austria, Germany, Holland, Belgium, France, England, Spain, Portugal, Andorra, Switzerland. 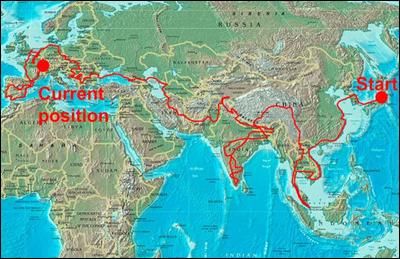 The route taken by Keiichi Iwasaki, 36, who has covered 45,000km in seven years, largely by bicycle. He left on his Raleigh Shopper bicycle in 2001 to go on a tour of Japan. But he enjoyed himself so much he caught a ferry to South Korea and since then has cycled through 37 countries without returning home 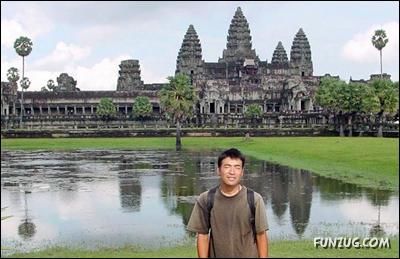 September 2002: He poses at Angkor Wat in Cambodia 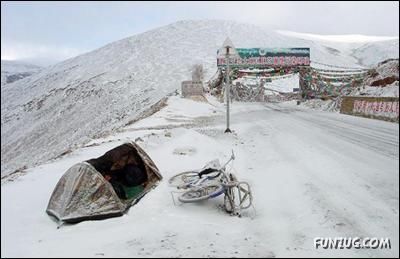 May 2003: Keiichi Iwasaki’s bike and tent on a snow-covered road in Tibet 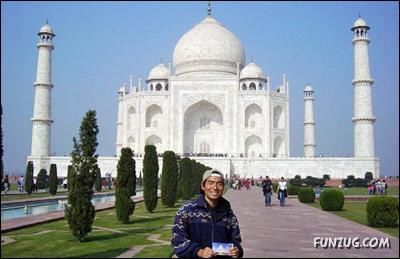 December 2004: He poses in front of the Taj Mahal, India 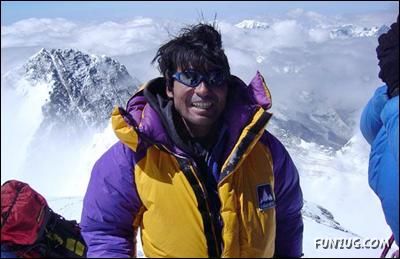 May 2005: Keiichi Iwasaki photographed at 8,848 metres above sea level on Mount Everest, Nepal 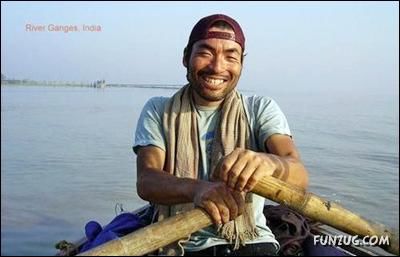 December 2005: Back to India. He rowed from the source of the Ganges river to the sea, a journey of 1,300km which took him 35 days 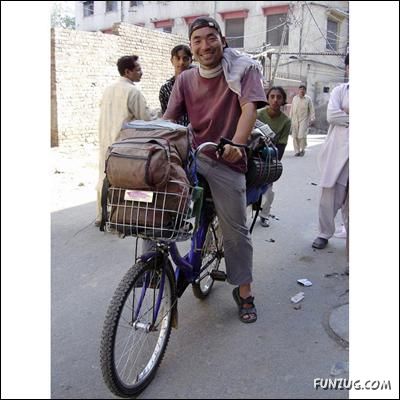 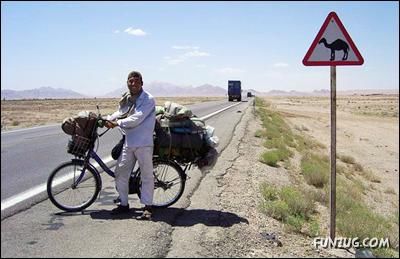 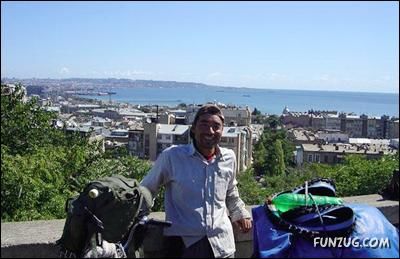 September 2006: He relaxes in the sunshine in Azerbaijan 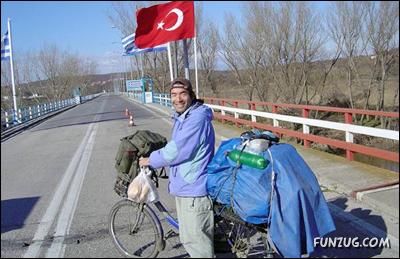 January 2007: Crossing from Turkey into Greece 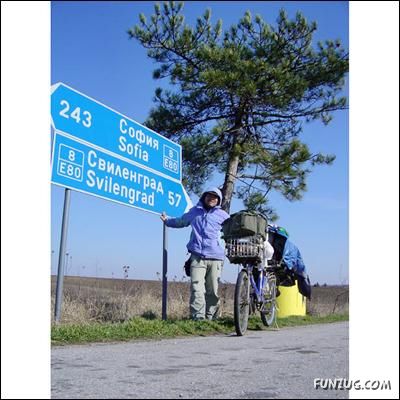 February 2007: He takes a break by the roadside in Bulgaria 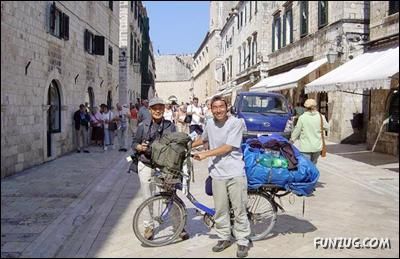 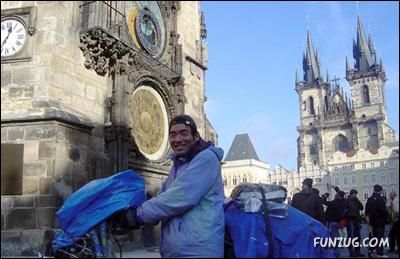 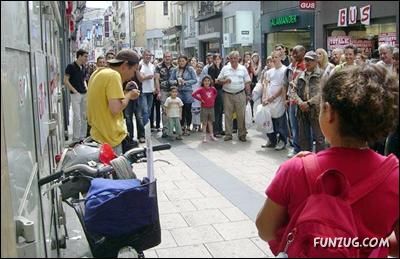 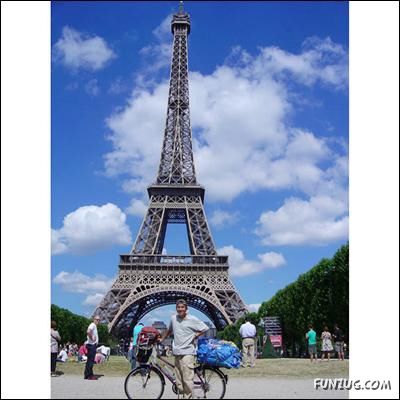 July 2008: Mr Iwasaki poses in front of the Eiffel Tower in Paris 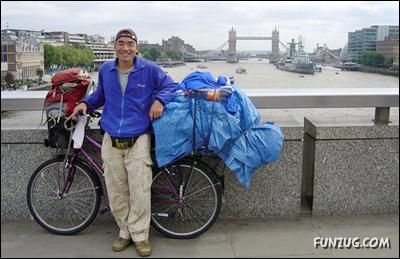 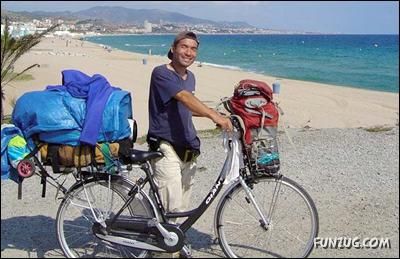 October 2008: Keiichi Iwasaki on a beach in Spain 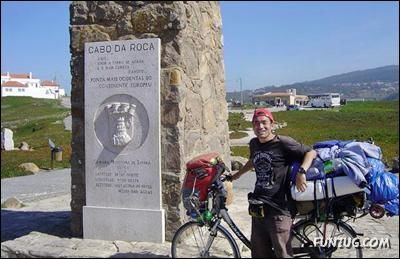 March 2009: He makes it to the western-most point of mainland Europe, at Cabo da Roca… 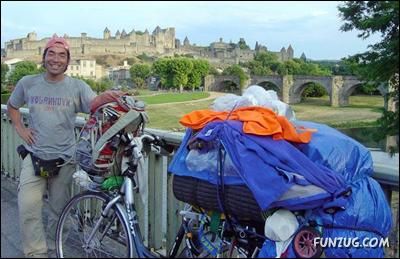 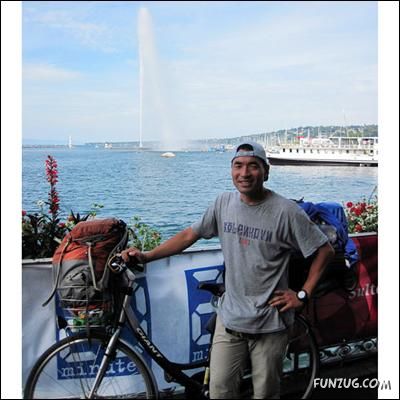 Another photo from July 2009 shows Keiichi Iwasaki in Geneva, Switzerland