The bride definitely wore white as 20,000 couples took part in the largest mass wedding in a decade in dozens of cities around the world.

The ‘blessing ceremony’, held by the Unification Church, was its largest for 10 years and
could be the last at such a large scale officiated by 89-year-old Reverend Sun Myung Moon, the controversial founder of the church.

More than 20,000 people crammed into the Sun Moon University campus in Asan, south of Seoul,
for the main event this morning, with another 20,000 joining simultaneous ceremonies in the U.S. Brazil and Venezuela. 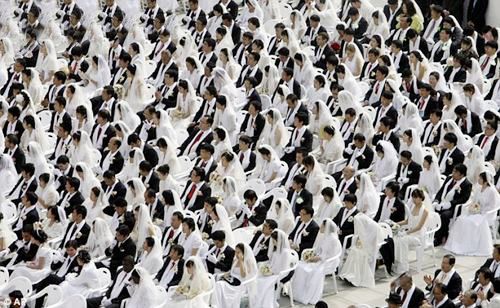 Some of the 20,000 brides and grooms taking part in the Unification Church mass wedding ceremony at Sun Moon University,
in Asan, South Korea, today Some were new couples who met for the first time in recent months in unions arranged by the church,
while others were married couples renewing their vows. The brides wore white veils and wedding dresses, or their national dress.
The grooms wore black suits with red ties, with white scarves wrapped around their necks.

The mass wedding ceremony is meant to mark Sun Moon’s 90th birthday and the 50th anniversary of his marriage to Han Hak-ja,
church officials said. It comes as he moves to hand day-to-day leadership of the Unification Church over to his children.

Row after row of brides and groom – hailing from South Korea, the U.S., Japan, Europe and elsewhere – posed for photos,
sang and practiced shouting ‘Hurrah!’ at a pre-ceremony wedding rehearsal. 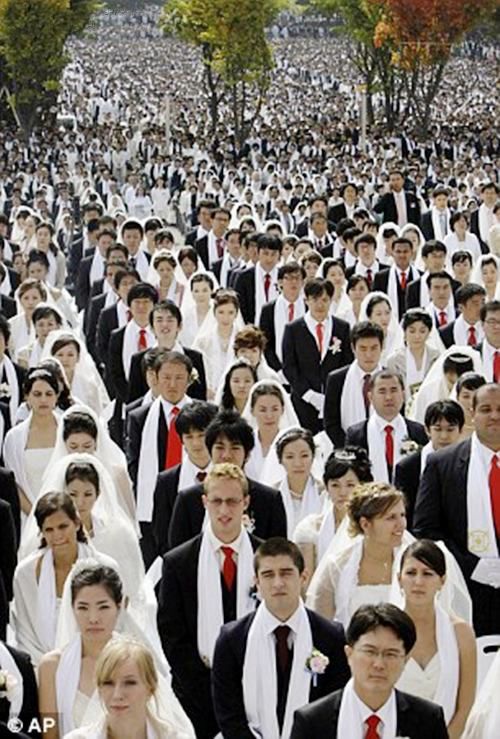 Without a hitch: Brides wore traditional white wedding dresses or national dress and grooms wore black suits and red ties. Right,
the newlyweds pray together during the ceremony. 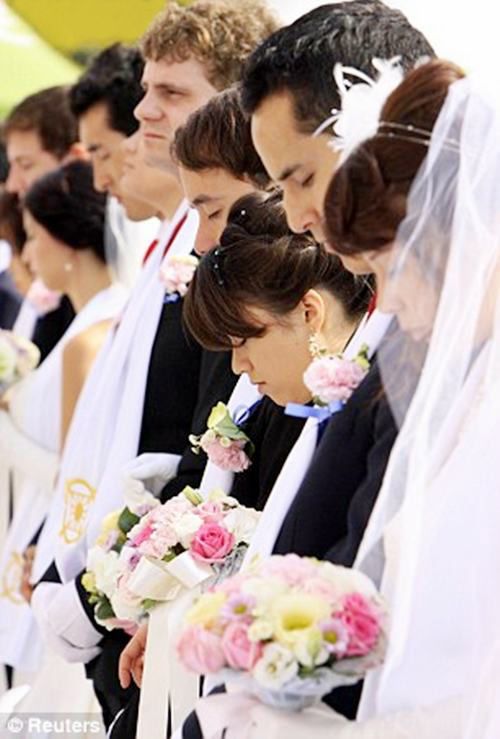 During the ceremony, Moon sprinkled holy water towards the crowd before the couples exchanged rings.
After blessing the newlyweds, he led them in a loud a cheer amid a shower of white confetti.

He said: ‘I pray that you become good husbands and wives, and men and women who can represent the world’s six billion humankind.’

Critics who accuse the Unification Church of engaging in cult-like practices say the mass weddings prove it brainwashes its followers.

In the past, Moon routinely paired off couples, many of whom met for the first time at their wedding.

Now, even arranged marriage couples have the chance to meet at least a few months before the ceremony, church officials said. 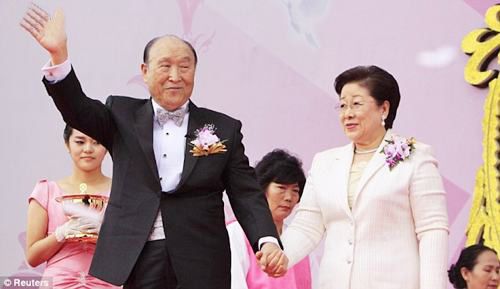 Controversial: Reverend Sun Myung Moon, with his wife Han Hak-ja, blesses the couples during the ceremony

But none of them were being whisked off on their honeymoons. Couples are required to observe a 40-day waiting period before they
cohabitate to prepare for marriage spiritually. Moon, a self-proclaimed Messiah who says he was 15 when Jesus Christ
called upon him to carry out his unfinished work, has courted controversy and criticism since founding the Unification Church in Seoul in 1954.

He held his first mass wedding in the early 1960s, arranging the marriages of 24 couples himself and renewing the vows of 12 married couples.

Over the next two decades, the weddings grew in scale. The first held outside South Korea,
at New York’s Madison Square Gardens in 1982, drew tens of thousands of participants and protesters.

In many cases, Moon paired off many couples from different countries as part of his aim of creating a multicultural religious world.

In his recent autobiography, he said: ‘My wish is to completely tear down barriers and to create a world in which everyone becomes one.’

Special day: One of the brides smiles as she listens to Rev Moon during the ceremony 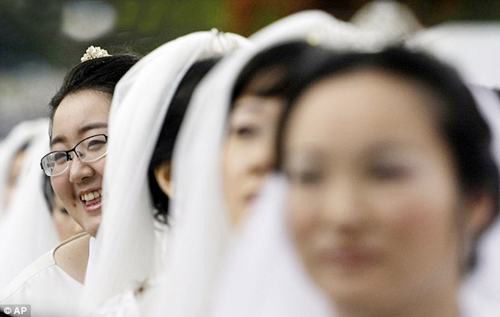 Traditional: Some of the 20,000 people in South Korea wore their national dress to the ceremony

He said: ‘I think my wife is the most beautiful bride here.’

In New York, 22-year-old Krystof Heller said his parents married in a 1982 mass wedding and he has known his new wife,
23-year-old Maria Lee of South Korea, for around four months.

‘It’s not just about a mass wedding, there is the moral emphasis. The big crowd is just the perk.’ 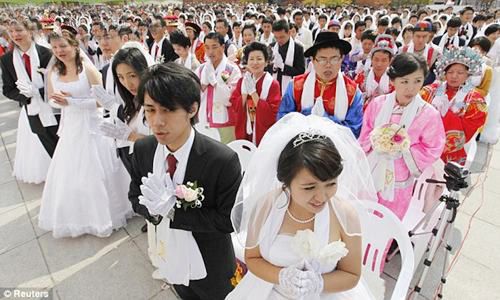 Arranged: One of the brides nods off during the marriage ceremony. Many of the unions were arranged by the Unification Church,
with couples meeting only months before they are wed. 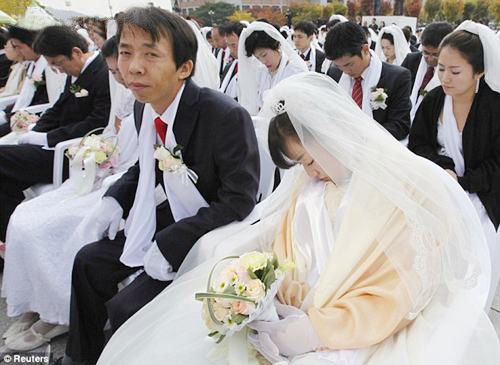 Simultaneous: Couples at a church in Washington join in the ceremony through an internet link

Churchgoers watched the ceremony on a large screen flanked by the flags of South Korea, Japan and the United States in Washington.

‘This is the best way to make peace,’ said Fumi Oliver, a native of Japan who married an American, the Rev. Zagery Oliver, 12 years ago.

Hundreds of brides and grooms gathered in churches in Australia, said Enrique Ledesma,
Australian director of the church-affiliated Family Federation for World Peace and Unification.

The ceremony in Honduras marks a new start for the movement in the Latin American nation, said Omar Valle,
president of the Unification Church in Tegucigalpa. He said 25 couples will renew their vows.

And in Brazil some 2,000 people in 40 cities took part in the ceremony via simultaneous broadcast. 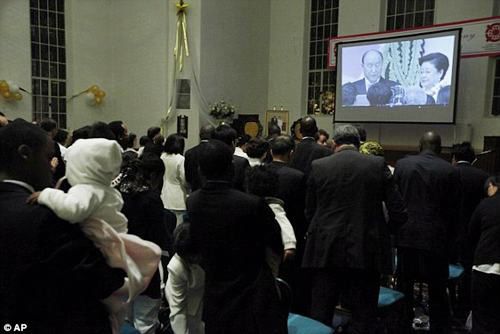