Nileen Namita, a 49-year-old artist and mother of three from England, undergone 51 cosmetic surgeries to achieve her dream of looking like Queen Nefertiti. Spurred by her belief that she was Nefertiti, the sun-worshipping wife of Egyptian pharaoh Akhenaten — Namita has spanned more than 20 years and paid around £200,000 (approximately $360,000). The 51surgeries, including eight nose jobs and three face lift plastic surgery, have all been on her face, and there are additional nose and lip tweaks on the horizon.

The grandma who spent U$ 16,000 to look like Jessica Rabbit 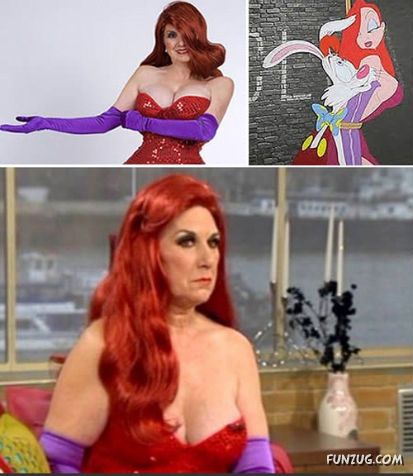 57-year-old great grandmother Annette Edwards, spent £10,000 ($16,000 USD) to make her look like cartoon character Jessica Rabbit, from the film ?Who Framed Roger Rabbit.? According to her, she had always loved rabbits and wanted to appear like her fictional cartoon idol. Annette had her operations performed in London’s Harley Street – world famous for itscosmetic surgery clinics. Over a week surgeons carried out a number of procedures on her including a boob job, brow lift and £600 worth of Botox injections.

The mother who had surgery just to look like her daughter 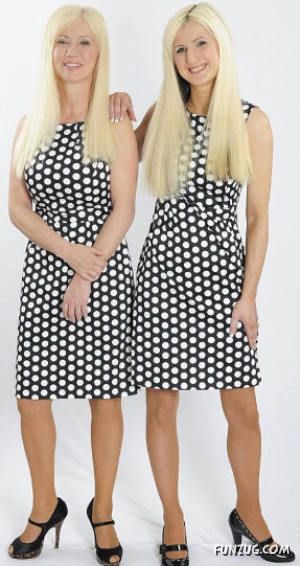 If you look to this picture you might think that Janet and Jane Cunliffe are twins. But they are not, they aren’t even sisters. They are mother and daughter! Janet spent more than $13,000 onplastic surgery in a desperate effort to bridge the 22-year age gap between herself and her daughter. They now have flowing blonde hair, hourglass figures and slender, toned legs.Mother and daughter both weigh in at 8st and, save for a couple of inches in height (at 5ft 6in, Jane is two inches taller) and different eye colors (Jane’s are brown, Janet’s are blue) they are virtually identical.

The twin sisters who paid £60,000 on surgery to look completely identical 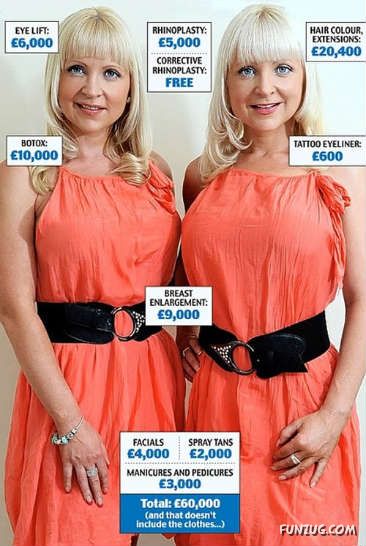 Some identical twins do everything in tandem, from coming down with chickenpox to donning tutus for ballet lessons. But Jo and Kerry Burton have taken this fact to a whole new level. When Jo decided to have cosmetic surgery on her nose, Kerry followed suit. And since that day, the sisters have spent £60,000 on a host of operations – all carried out at the same time by the same doctors – to ensure they cannot be told apart. They even had to have their initials written on their bellies so the surgeon knew who was who. At age 34, they both have had a breast enlargement, eye-lift, permanent make-up tattoos and Botox jabs. 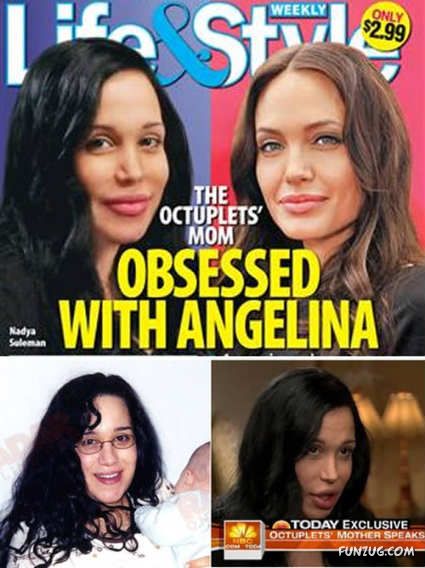 Nadya Suleman, the woman who recently gave birth to octuplets, is said to be morphing into Angelina Jolie. According to plastic surgeon Dr. Anthony Youn, the similarities between Nadya and Angelina are uncanny, their brows are almost identical, and they both have nice smooth foreheads. Youn, who obviously has not treated Suleman, said the megamom appears to have undergone surgical procedures, including lip augmentation and rhinoplasty, which make her resemble Jolie. The similarities are more than skin deep. Both Suleman and Jolie are 33. Both are raising large broods of children (Angie’s is only up to six, but she says it’s still growing.) 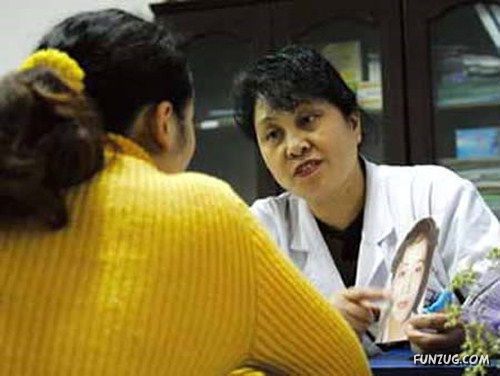 A man in China has convinced his new wife to undergo plastic surgery so she could resemble his dead first wife. Zhao Gang, 32 from Chongqing city, China, lost his first wife in a car accident three years ago and now wants his new wife to look exactly like her dead wife.
Zhao said he only got married because his new bride looks a bit like her and he wanted to have a chance to make up for his mistakes. Now, he wants his new bride to undergoplastic surgery so she would really resemble his dead wife. Fortunately for him, his second wife agreed to his suggestion. His unidentified wife told the newspaper, "I feel conflicted. I don’t want to become another’s shadow, but I also don’t want to lose the family. Now I only hope the surgery will not make me look ugly." Zhao said, "Maybe it’s more or less unfair to her, but she has agreed and I will embrace her with all my love."

The female impersonator who spent $ 16,000 to look like Michael Jackson 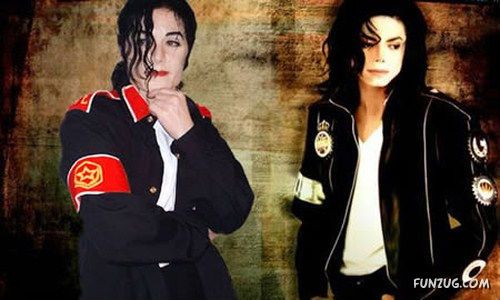 UK mother of three Miki Jay has proven that you don’t have to be black or even a male, to be a professional Michael Jackson impersonator. Jay has spent £8000 (about $16,000) onplastic surgery to look like Jackson, getting her nose, chin and cheeks remodeled. "Most people know I’m a woman but it doesn’t bother them," says Jay, who claims to earn £120,000 ($240,000) a year as an impersonator. Mikki, 39, became obsessed with the King of Pop after winning a talent show in 1991. 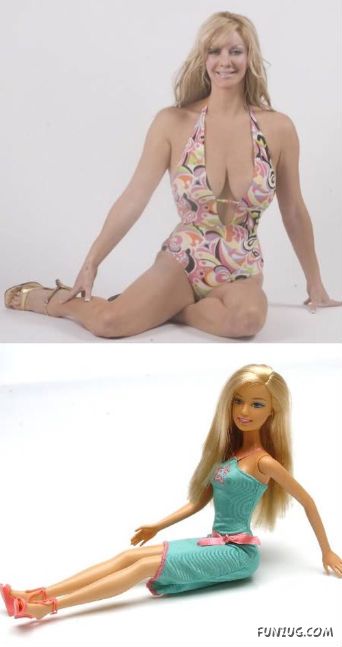 Former Bunny Girl Sarah Burge spent half a million pounds turning herself into a real-life Barbie doll. The 49-year-old housewife and beautician from St Neots, in Cambridgeshire has spent £539,500 transforming herself ? breaking the world record previously held by American Cindy Jackson, who also wanted to be like the famous doll.
The half-million pound costs include: £32,000 have her whole face lasered to remove a layer of skin to give it a more youthful look; £26,500 on perfecting her bust ? including having it reduced and the nipples moved; £30,000 keeping her jawline firm; nearly £15,000 on her tummy; and £14,000 on keeping her bottom pert. The mother-of-three has undergone more than 100 surgical andcosmetic treatments. Her passion for going under the knife having started after she had reconstruction surgery to her face after being beaten up and left for dead.

The dying woman who is spending £40,000 on plastic surgery to look like Demi Moore 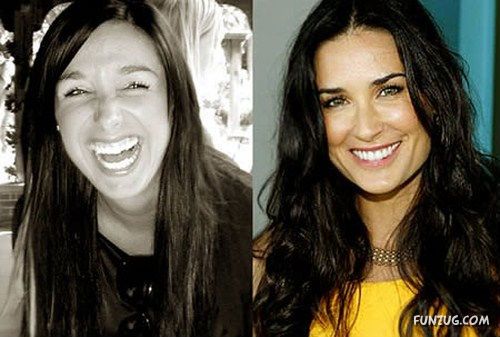 A woman with an inoperable brain tumor is spending £40,000 on plastic surgery ? so she can die looking like movie star Demi Moore. Lisa Connell, 29, will use the money her mum Angela had saved up for Lisa’s wedding to pay for her new look.
Despite being a stunning brunette, Lisa has never been happy with her appearance and is convinced the surgery will make her look as beautiful as Demi, who is no stranger tocosmetic surgery herself. In a race against time, Lisa will undergo liposuction, a breast enhancement and eyebrow lift, plus work on her skin and teeth to fulfill her dream.
Lisa was just 27 when she was diagnosed with an inoperable brain tumor known as a meningioma.