Honestly, no Photoshop. Cathie Jung?s tiny waist measures just 15in (38cm), making her figure distinctly hourglass. The Queen of Corsets, as she has aptly named herself, has worn tight-fitting corsets for years to get there, and appears in the 2007 edition of the Guinness Book of World Records. Whilst she currently holds the record for the smallest waist on a living person, the record for the smallest waist ever goes to Ethel Granger who had a wasit of just 13″. 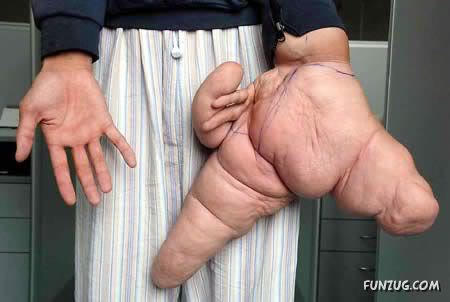 Chinese man Lui Hua suffers from a rare condition known as macrodactyly. When he was hospitalized in Shanghai on July 2007, his left thumb measured 10.2 inches and his index finger measured close to 12. On July 20 surgeons undertook a seven-hour operation to reduce the size of Liu’s fingers and thumb. Doctors removed 11 pounds of flesh and bone in the procedure. A second surgery is scheduled to take place.

German schoolgirl Annika Irmler has licked her way into the Guinness Book of Records with her whopping seven centimetre tongue. The twelve-year- old from Tangstedt, near Hamburg, can lick the ice cream from the bottom of a cornet – while her friends have to use their fingers.

4. Lee Redmond: World’s Longest Fingernails –until she lost them on a car crash 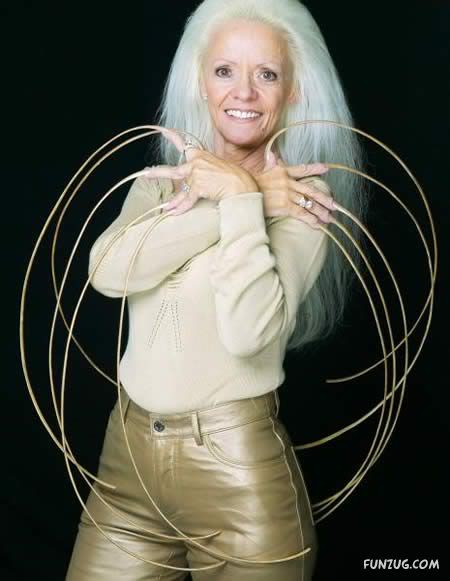 Lee Redmond, a woman from Utah who has not cut her nails since 1979, had grown and carefully manicured them to reach a total length of 8.65 m (28 ft 4.5 in), and was listed in the Guinness Book of World Records as the world’s longest fingernails. Sadly, on February, 2009, she lost them in a car crash. 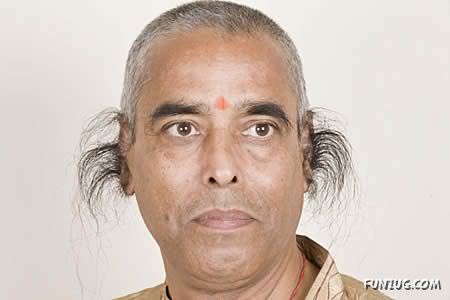 Indian grocer Radhakant Baijpai certainly has a goal in life: make sure that he has the longest ear hair in the world. Radhakant was crowned the official Guinness world record holder for the longest ear hair back in 2003, when his aural fronds were an already-impressive 13.2cm long. But that didn’t stop him pursuing his goal of ever-longer hair on his ears. After several more years of carefully cultivating and caring for the ear-hair, Radhakant’s tufts now stretch an astonishing 25cm. He is now waiting for Guinness adjudicators to confirm that he has set a new high, hairy bar for his chosen field. 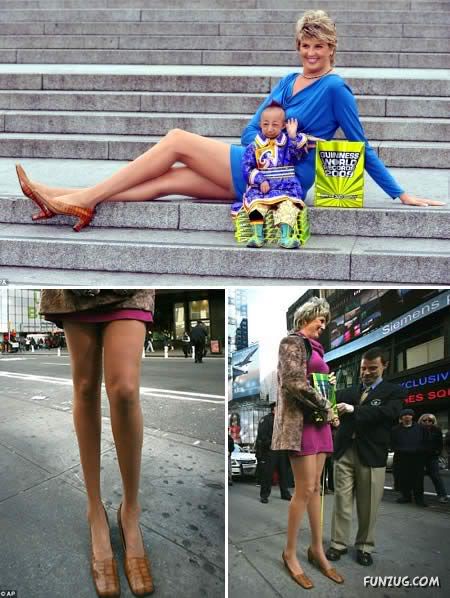 Russian woman Svetlana Pankratova has, according to Guinness World Records, the longest legs of any woman in the world. While she is not the world’s tallest woman, her legs are 132 centimetres (4 ft 4 in) long. Because her upper body is of much more typical dimensions, she is 196 centimetres (6 ft 5 in) tall. She has also very large feet, size 13 (US) / 46 (EU), making shopping for shoes difficult. From 1992 to 1995, Pankratova played women’s basketball in the USA, and on 2008 she appeared in Trafalgar Square in London on September 16, 2008 with He Pingping, the smallest man in the world, to promote the 2009 edition of the Guinness World Records. 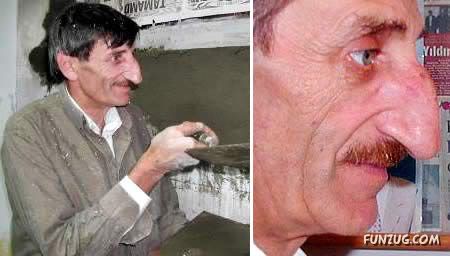 Mehmet Ozyurek, born in Turkey in 1949, has been confirmed as having the world’s longest nose. His nose measured 4.5 inches (8.8 cm) when it was last measured on July 06, 2007. He currently lives in Artvin, Turkey. 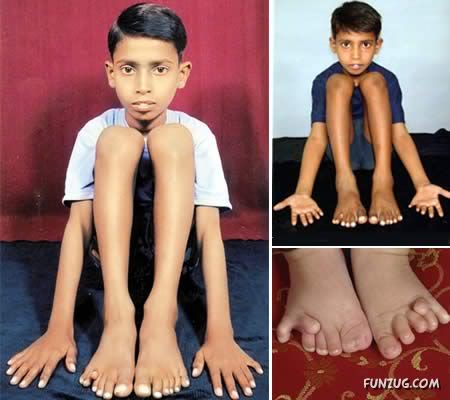 Along with Pranamya Menaria, Devendra Harne shares the title of the person with the most Most Fingers and Toes, they are both indian and have 25 in total (12 fingers and 13 toes) as a result of the condition polydactylism.

Frank Ames of Saranac in New York earned his place in the Guinness Book of World Records with a pair of bushy brows measuring 9.6cm. He decided to go for the title on 2003, only to discover it didn’t exist. After calling officials, he set up and claimed the hairy new record. “I don’t know why it grows like that, it just always has,” he told reporters.