It’s hard to believe everything you see on the internet. With the graphic skills we have developed today, pictures could be manipulated to make you believe anything unreal. This collection of photos will give you this same impression, but, you may want to take a second glance… these pictures are not trying to fool you at all! 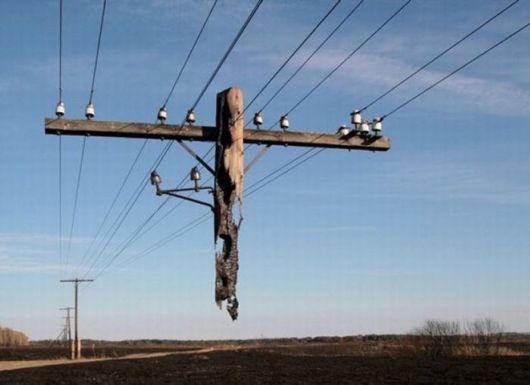 The hanging pole: This photo of a hanging pole looks rather unbelievable after more than half its height was burned off completely, leaving only the upper part visible. It now hangs by means of the wires it was meant to be supporting. 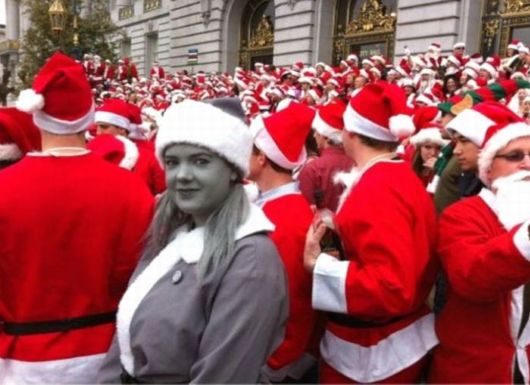 Black and white Santa: If you think there’s no way this photo isn’t manipulated, think again. It might not be entirely natural, but this girl really looks like a greyscale version of Santa. The clothes, makeup and hair color were purposely chosen to create this bizarre effect. 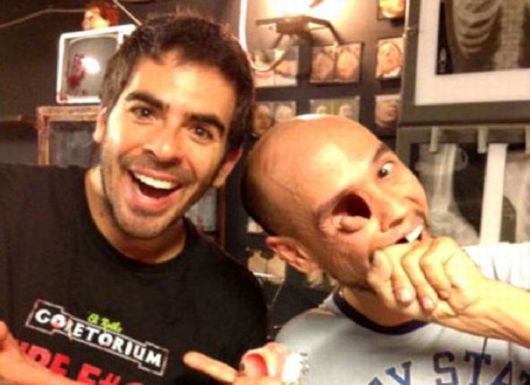 The one-eyed man: This photo may look oddly unrealistic, but it’s also shocking news. This man, named Billy Owen, once suffered from sinus cancer, which cost him to lose his right eye. Luckily, this man dealt with this situation positively, as he now works in movies as a zombie! 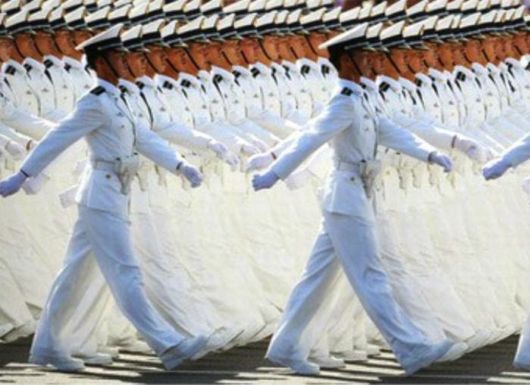 United Forces: It seems as though someone used a mirroring effect on these marching soldiers. Apart from looking identical in their white clothes and hats, they are perfectly synchronized in their marching, resulting in one crazy illusion. Look closely at the photo, and you will be able to see some differences. 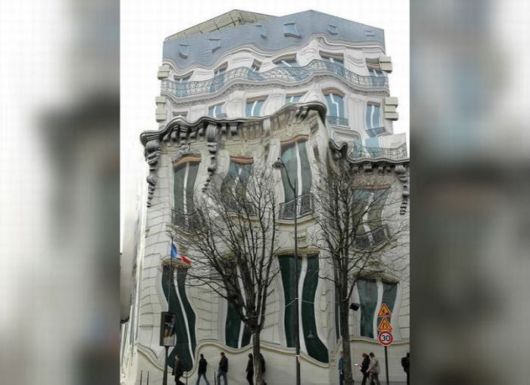 Distorted building: The sight of this building, found in Georges V Avenue, Paris, France, gives the impression that it is melting. In fact, this is the ‘Melting Building’, for which an artistic technique was used to create one incredible optical illusion. One can see that the photo is not manipulated by looking at the undistorted trees and the normal-looking part of the roof that shows at the top. 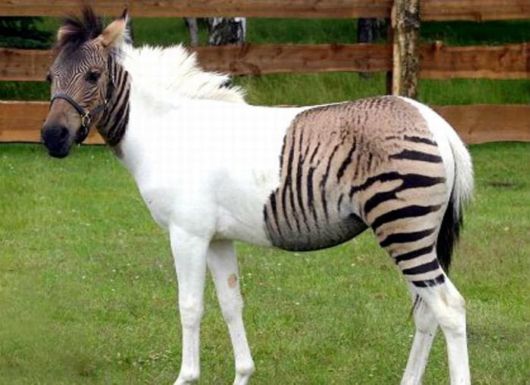 The Zony: Ok, unicorns don’t exist, but zonies (or zebroids) do! This is what a cross between a zebra and a pony looks like. And once again, we’re not joking! 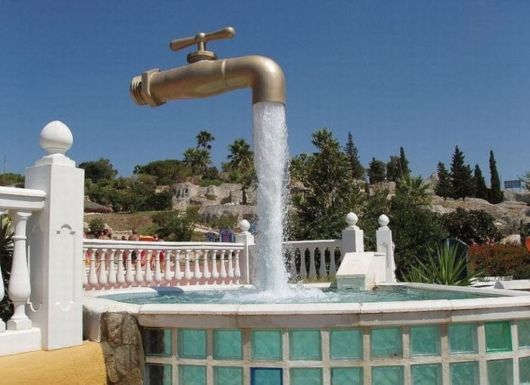 The floating faucet: I found it hard to believe this ‘Magic Tap’, found in Spain’s Aqualand, is a real fountain. How can the water possibly be coming out of a faucet suspended in mid-air? Well, apparently there’s a transparent tube doing the trick, which clearly, is very well-hidden. Can anyone see it?! 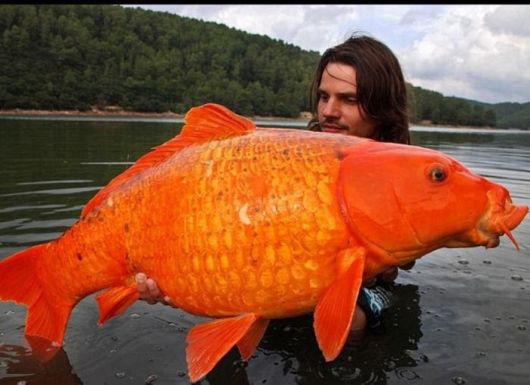 Goldfish beast: Did you know goldfish can grow this big? This man has definitely found the answer! Raphael Biagini was on his search for this gigantic goldfish in southern France, and it took him an unbelievable 6 years to finally find it! 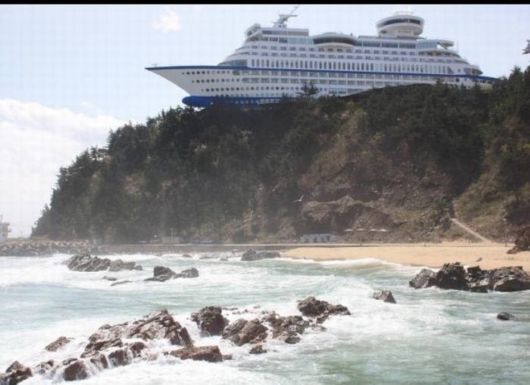 The real Noah’s Arc: If you’re wondering how this yacht could have possibly ended up on that cliff, you’re certainly not alone. This is actually a Sun Cruise Resort built on top of a cliff in South Korea, with its shape purposely resembling a yacht to make it more innovative. 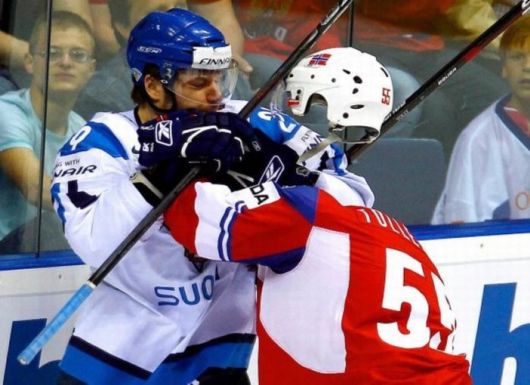 The headless hockey player: This photo looks normal, until you realize that the hockey player in red is headless! Of course, there’s no way a hockey fight could have ended up that bad. In reality, the photographer who took this photo managed to capture the helmet in mid-air while the two players were in action, giving the impression that the head had been edited out. 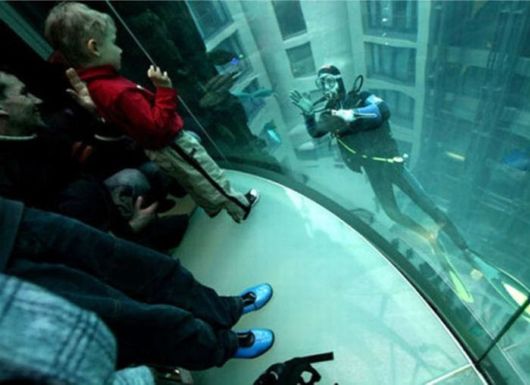 The flying frogman: Can you imagine yourself looking out of a window and spotting a flying scuba-diver? Well, this is not an unusual sight at the Radisson Blu Hotel in Berlin, where one can visit an 82-foot high AquaDom, the world’s largest cylindrical aquarium. It holds a million liters of salt water, and has quite a number of colorful tropical fish living in it. 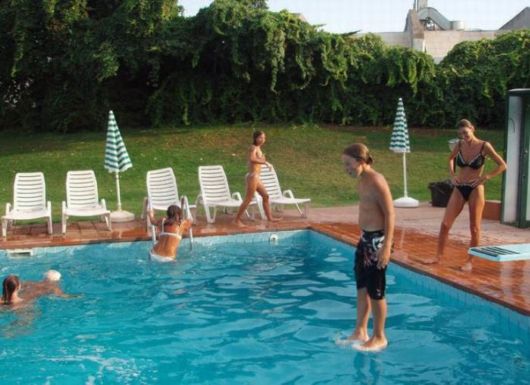 He who walks on water: This picture of a boy jumping into a pool must have been perfectly timed when it was taken. While it looks as though this boy is standing still on the water, he is in fact about to get in. Baffling much? 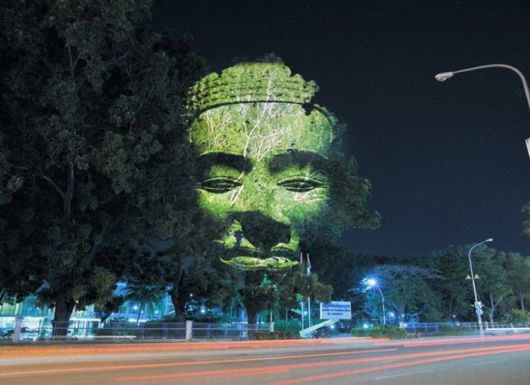 The face of nature: This photo doesn’t look realistic to me at all, but when I looked closely for a moment, I could understand what it was. The illusion you get is actually the intention of a French artist Clement Briend, who created illuminating 3D faces on trees by using several large projectors. 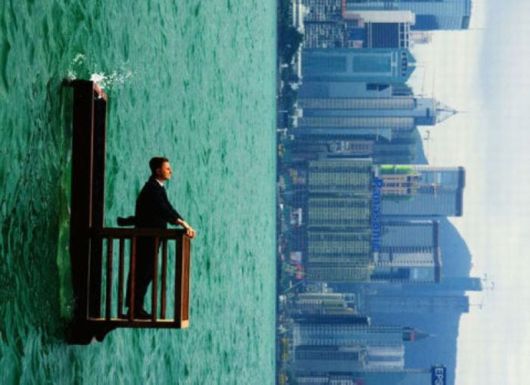 Another beautiful day: This photo was taken by the talented photographer Philippe Ramette, whose work is never Photoshopped, although it may be hard to believe. This artist believes that nothing inart should ever be faked, and this leads the viewer to feel more perplexed than ever when viewing his work, including this remarkable image of a man in a sideways balcony in the middle of the sea. Did you tilt your head over just like I did?