When Regina Mayer’s parents dashed her hopes of getting a horse, the resourceful 15-year-old did not sit in her room and sulk. Instead, she turned to a cow called Luna to make her riding dreams come true.

Hours of training, and tons of treats, care and cajoling later, the results are impressive – not only do the two regularly go on long rides through the southern German countryside, they do jumps over a makeshift hurdle of beer crates and painted logs.

Regina joked while sitting on her brown and white, grass-munching bovine companion: ‘It’s incredible really, she thinks she’s a horse.’ 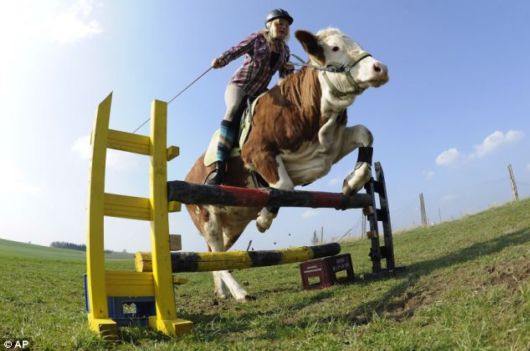 Regina started slowly and steadily in training Luna the cow, and only tried to ride her after six months 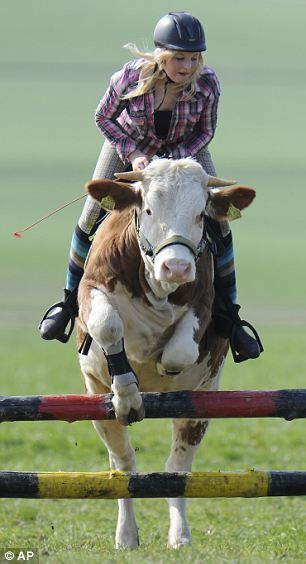 Luna expertly vaults another jump while guided by schoolgirl Regina

The pair’s unlikely friendship started about two years ago, shortly after Luna was born on the Mayers’ sprawling farm in the hamlet of Laufen, close to the Austrian border.

They started off with walks in the woods, then Regina slowly got her cow more accustomed to human contact and riding equipment.

About six months later, it was time to see how Luna would respond to a rider on her back. Regina sat in the saddle and all went as planned – at least at first.

‘She was really well behaved and walked normally,’ said blonde Regina. ‘But after a couple of metres, she wanted me to get off. You could see that she got a bit peeved.’

Luna and Regina are now best friends, spending most afternoons together once the teen – who aspires to become a nurse – comes home from school.

Now, Luna understands commands such as ‘go’, ‘stand’ and ‘gallop’ – if she feels like it.

‘When she wants to do something, she does it, when she doesn’t, she doesn’t,’ said Regina, who proudly says Luna thinks of her as her mother.

‘And she’s often very headstrong but can also be really adorable.’ 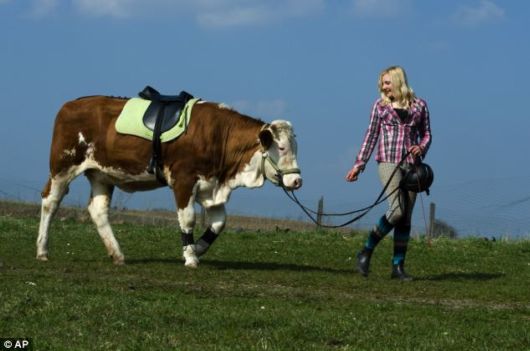 Regina spends an hour after school with Luna, and has even got her to understand several spoken commands

Anne Wiltafsky, who trains cows near the Swiss city of Zurich, said Luna’s talents are not particularly surprising and that, historically, it was quite common to ride cows and use them as workhorses.

‘Cows are lovable companions because they are easygoing, have strong nerves and are ‘unbelievably devoted’ to people they like.’ 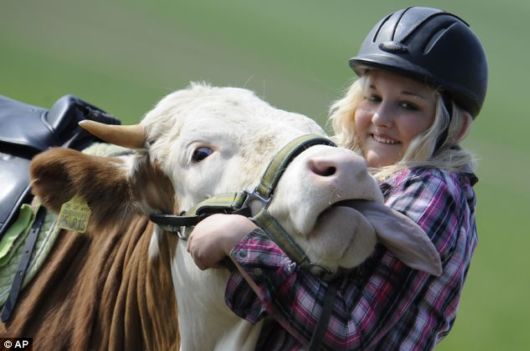