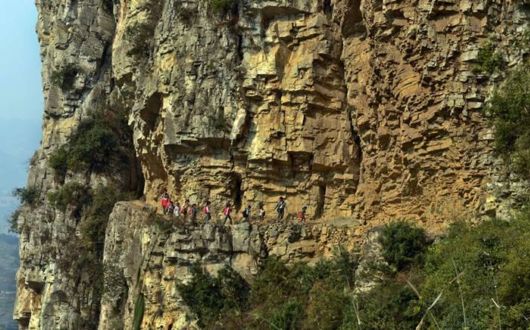 Children walk along a narrow mountain road to get to school in Bijie, southwest China’s Guizhou Province. Banpo Elementary School is located halfway up a mountain and each day students from the nearby Genguan village have to climb a narrow winding footpath cut into the mountainside… 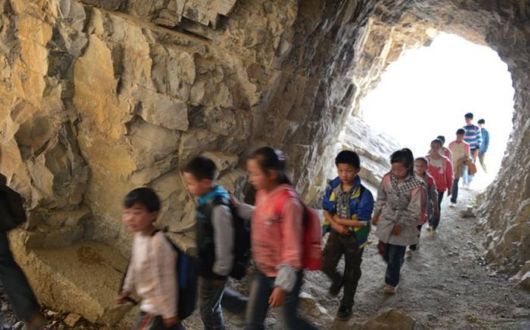 The footpath is cut through the cliff face at points. It is less than 0.5 metres wide in places so the children have to walk single file and press themselves into the side of the mountain is someone wants to squeeze past. According to headmaster Xu Liangfan the school has 49 students. 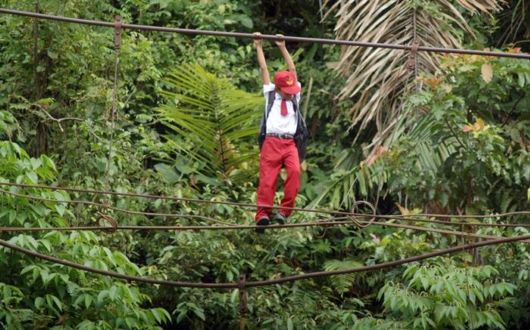 A boy climbs a wire across a river to get to school in Pintu Gabang, Indonesia. These children have to tightrope walk 30 feet above a flowing river to get to their class on time and then walk a further seven miles through the forest to their school in the town of Padang…Picture: Panjalu Images / Barcroft Media 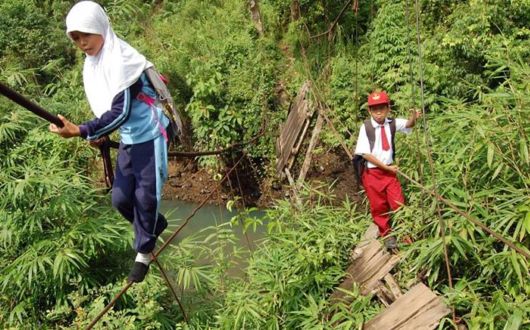 Each day 20 determined pupils have to cross the local river like circus performers after the suspension bridge collapsed in heavy rain.Picture: Panjalu Images / Barcroft Media 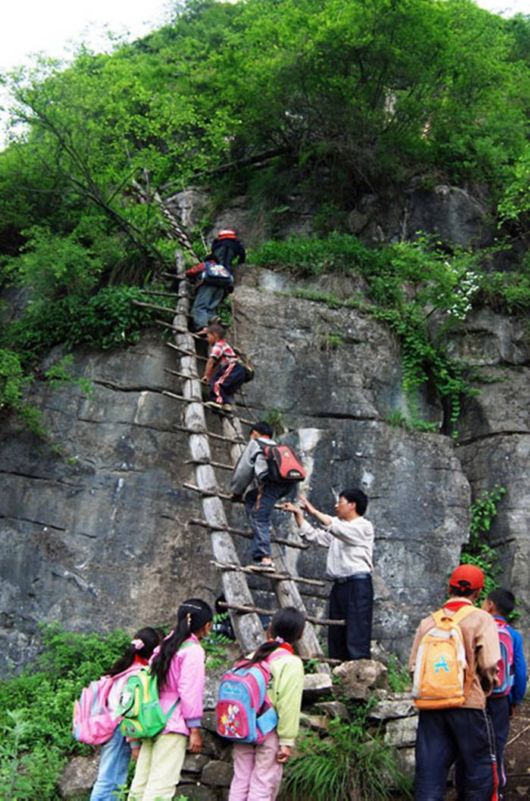 Teacher Li Guilin helps children climb one of five rickety wooden ladders to reach their school on a cliff 2,800m above sea level, in Gangluo County, Sichuan Province, China. The children would spend the week at the school before repeating the dangerous journey in order to get home for the weekend…Picture: Quirky China News / Rex Features 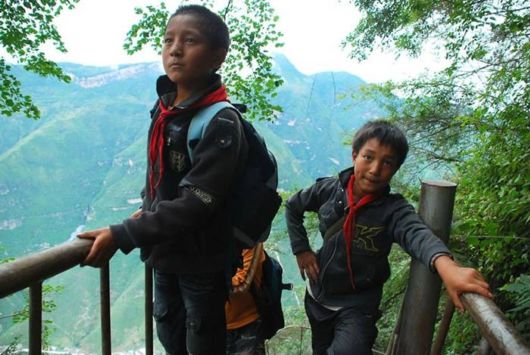 The wooden ladders on the approach to the school have been replaced with a metal staircase that makes the ascent much easier and safer.Picture: Quirky China News / Rex Features 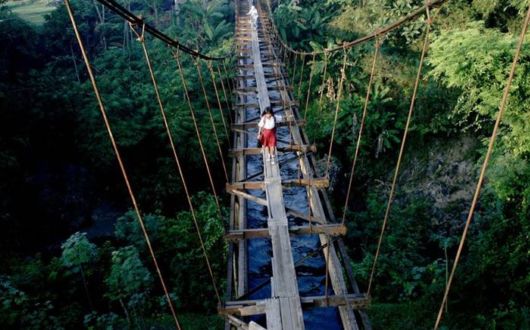 A school child crosses ane aqueduct that separates Suro Village and Plempungan Village in Java, Indonesia.The children decided to use the aqueduct on their journey to school as a shortcut, even though it wasn’t made for people to walk on…Picture: Panjalu Images / Barcroft Media 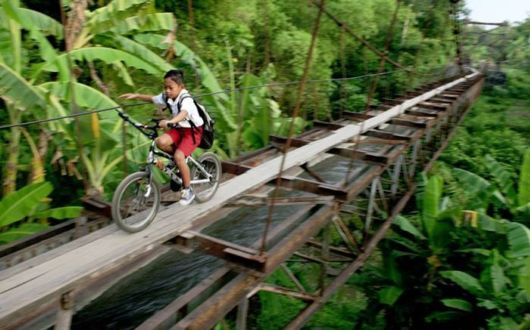 Even though it is dangerous, the children say would rather use it than walk a distance over six kilometers.Picture: Panjalu Images / Barcroft Media 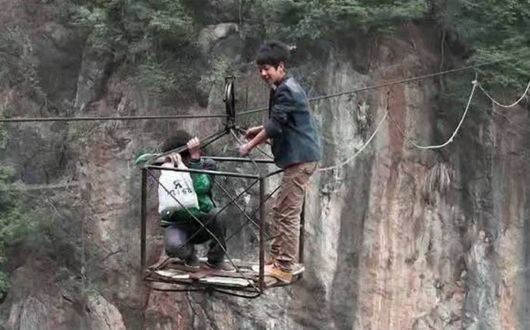 To get to school each day children living in a mountainous village in China have to cross a valley hundreds of metres deep on a rickety, homemade cable car. Villagers who live in Decun village in southwest China’s Guizhou Province used to have to make the journey on foot, which took five hours, but in 2002 local man Hui Defang built a simple cableway.Picture: Quirky China News / Rex Features 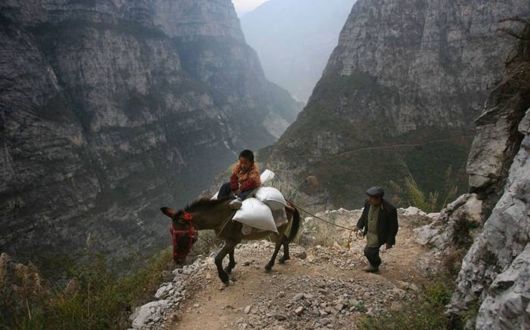 Gulu Village Primary School pupil Shen Qicai rides a donkey as his his grandfather accompanies him. Gulu is a remote Chinese mountain village located in a national park filled with canyons, sheer precipices and overhanging rocks. Posted in gals-group Group.The village’?s primary school is probably the most remote in the world. Lying halfway up a mountain, it takes five hours to climb from the base to the school…Picture: Sipa Press / Rex Features 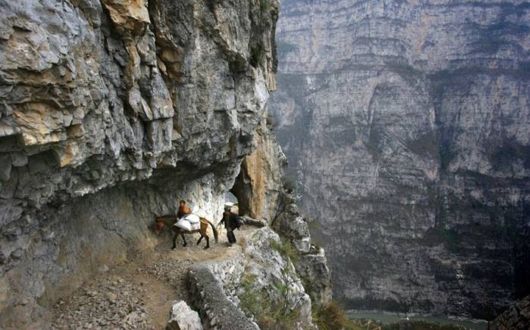 The children who attend the school face a dangerous journey to reach it and must traverse a path that is only 1ft 4ins wide and which has a sheer drop on one side.Picture: Sipa Press / Rex Features 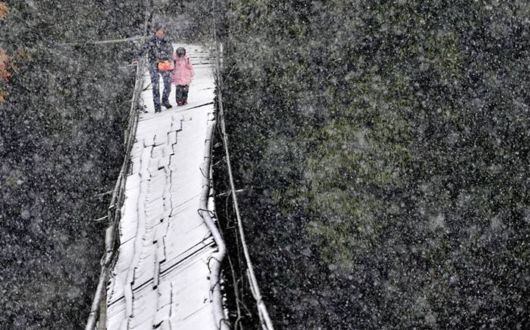 Zhao Jihong and her four-year-old daughter Zi Yi cross a broken bridge in the snow to get to school in Dujiangyan, Sichuan Province, China. Posted in gals-group Group.Shawan village’s only connection to the outside is a wooden bridge. However, this bridge was damaged by flooding, leaving it extremely precarious and leaning dangerously to one side.Picture: Quirky China News / Rex Features 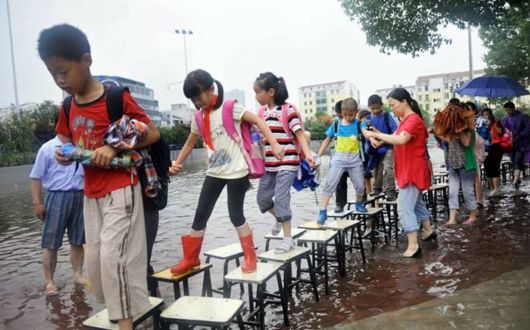 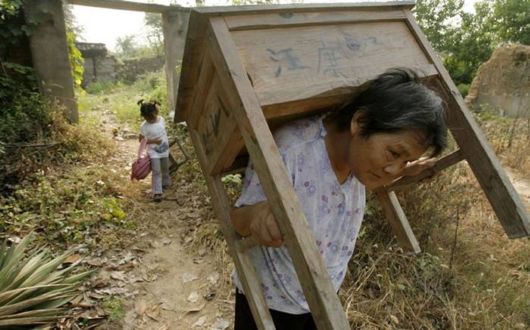 A woman carries a desk while a young girl carries a chair to school in Macheng, Hubei province, China, where primary school pupils have to bring their own desks and chairsPicture: Imaginechina / Rex Features 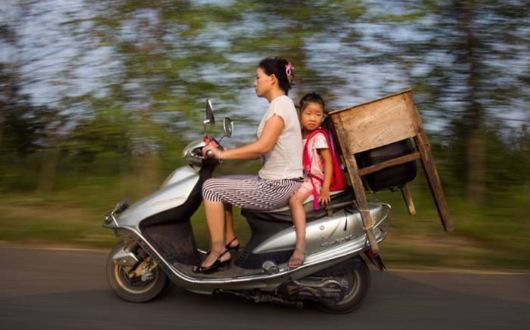 Five-year-old Lu Siling rides with her desk on the back of her mother’s motorbike on the first day of school in Macheng, China. There are 5,000 pupils at the schools in the town, but only about 2,000 desks. So more than 3,000 children have to go to school with desks and chairs, like their parents’ generation. Some children even use their parents’ old desks.Picture: China Foto Press / Barcroft Media 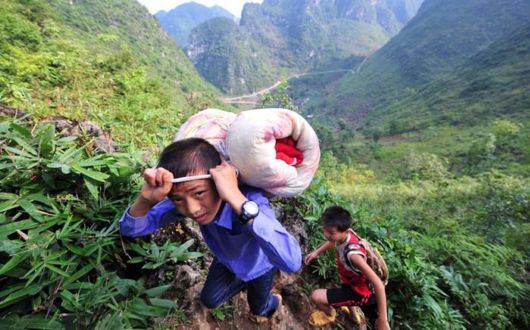 Students carry their belongings as they trek back to school from home on a rugged mountain path in Dahua Yao Autonomous County, southwest China’s Guangxi Zhuang Autonomous Region. As the children live in mountains far away from the village school, Posted in gals-group Group.most of them stay there during the school year and return home for the summer and other holidays.Picture: KeystoneUSA-ZUMA / Rex Features 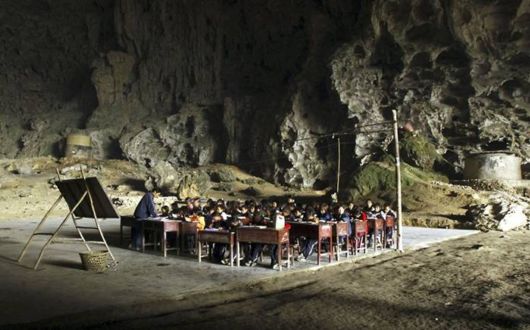 Children attend class at the Dongzhong (literally means in cave) primary school at a Miao village in Ziyun county, southwest China’s Guizhou province. The school is built in a huge, aircraft hanger-sized natural cave, carved out of a mountain over thousands of years by wind, water and seismic shifts.