These images are not immediately obvious, but some people may never consider them. Maybe the whole thing in the faith of people. But that’s exactly it – with a beard and thorns wreath. And God only knows why he appeared on the tube is my home. I hope this does not begin to blame the crowd of pilgrims, "- words of a woman found in her home image that resembles the face of Jesus Christ.
This collection is devoted to the phenomenon of holy images of ordinary people. 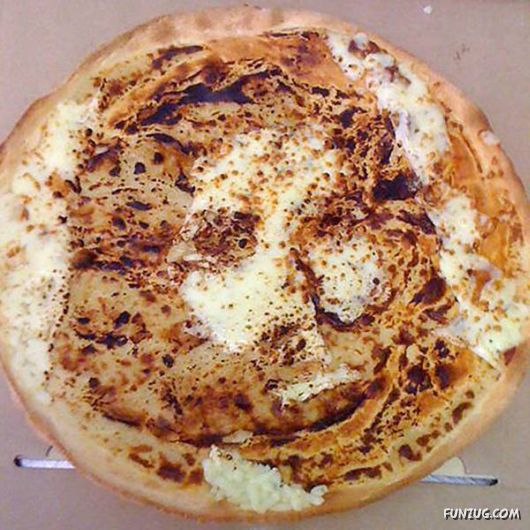 1. Posh Pizza Pizza in Brisbane boasts the image of Jesus on his pizza, discovered in April 2011. Some people, according to Mary Phelan, called this pizza "cheese icon." Pizza was placed in a vacuum package and sold at a charity auction for £ 98. (Rex Features) 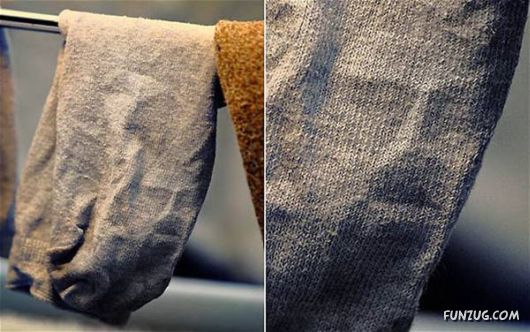 2. 38-year-old Sarah Crane, who lives in Orpington (Kent), in December 2011 saw the face of Jesus as he is usually portrayed in the bends of the lines drying socks. Guy Sarah agreed that the lines on the toe look like the face of Christ. The image of him disappeared when the couple tried to move a toe. (Caters) 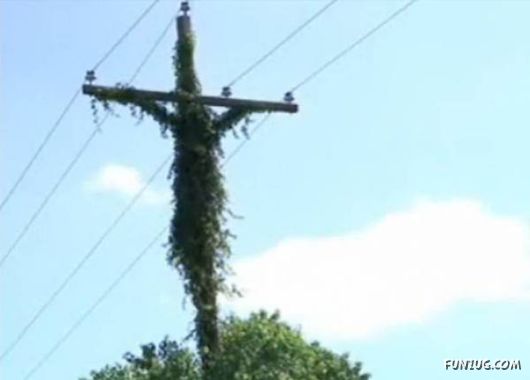 3. The driver Ricky Navarre, a passing on the highway 26, found that the telegraph pole, entwined stems, like the image of Jesus on the cross. On his find, he said in an interview in September 2010. (YOUTUBE) 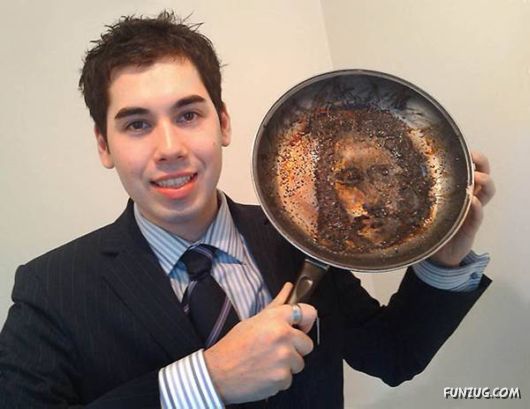 4. Toby Ells shows the pan with the image of Jesus Christ. According to him, the image appeared in a frying pan after he lay down to rest and forget that put the pan with the bacon on the stove. After Toby awoke, he discovered that the room was filled with smoke. The image of the pan, according to Ellsa – evidence that about him after all someone cares. (CATERS NEWS) 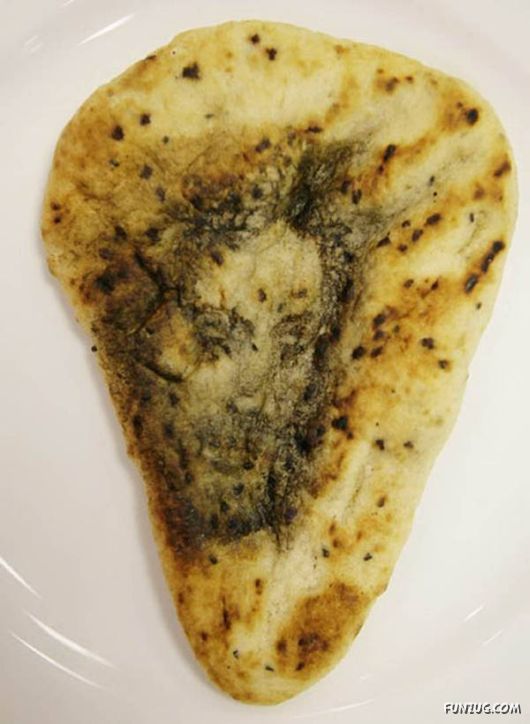 5. This cake was handed a 34-year-old David Howlett at an Indian restaurant in Esher, Surrey. (SWNS) 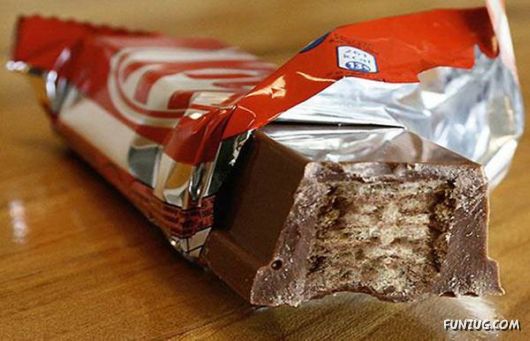 6. This photo is Kit-Kat bar with the image of Jesus was placed on the Dutch site NU.nl. Its author claims that take a bite bar, find the person of Jesus. However, not all share the opinion of the author. One commentator noted that the image looks more like Darth Vader. (EUROPICS [CEN 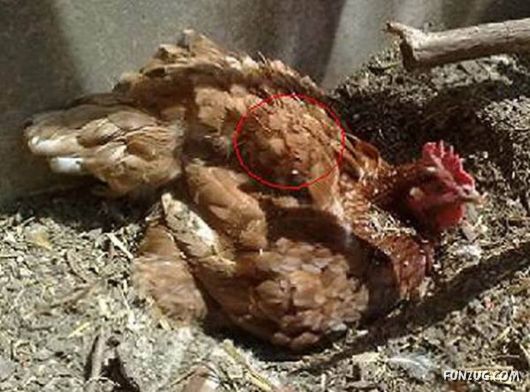 7. Mitchell Rowley Regis from Granger says that if you look closely at a photograph of his chicken Gloria, you can see the image of Christ. What he discovered in July 2010. (REX FEATURES) 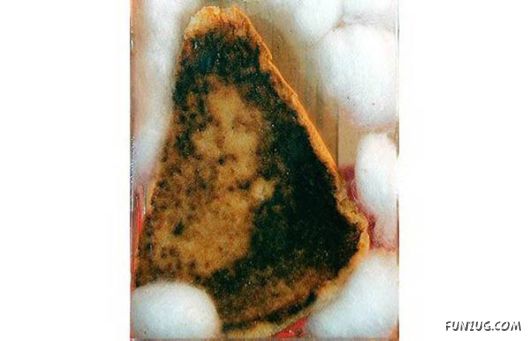 8. Another auction lot eBay – cheese sandwich with the image of the Virgin Mary. In November 2004, it bought the online casino GoldenPalace.com for 28 thousand dollars. (AP) 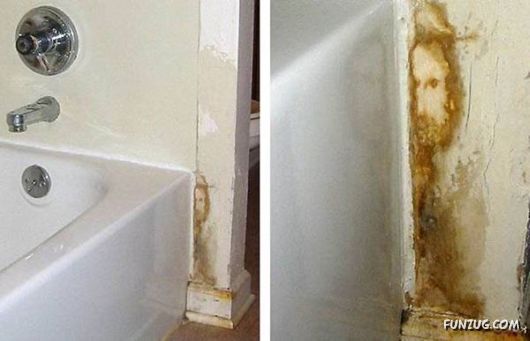 9. A piece of plaster from the image of Jesus Christ, so also was transformed into a casino property for $ 1999.99 GoldenPalace. 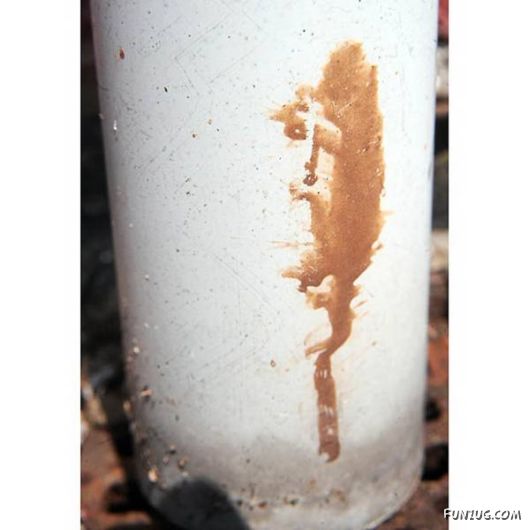 10. According to nurse Alex Cotton of Coventry, God gave her a sign, he reveals his image on a drainpipe of her home. Alex even invited the Pope to see the vision. The nurse believes that the opportunity to see the image depends on the degree of human faith, and hopes that her house will not bring down a crowd of pilgrims. (CATERS) 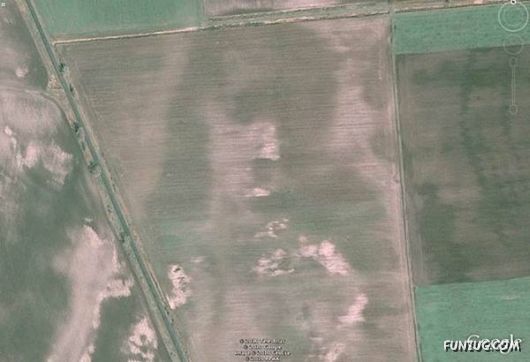 11. 26-year-old Zach Evans from Southampton noticed that one of the fields in Hungary on the map in Google Earth resembles the image of Christ. (GOOGLE) 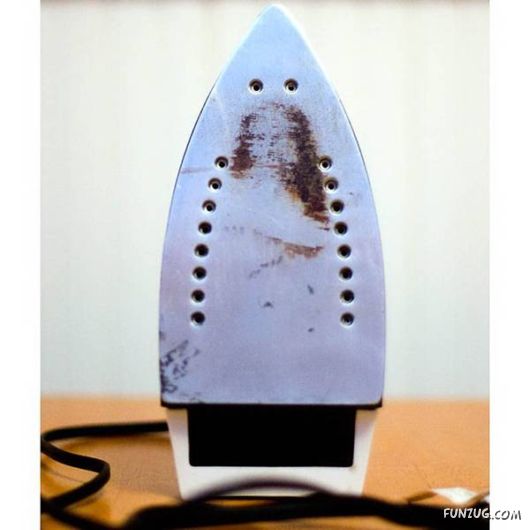 12. Steam Iron Mary Jo Cody from Metyuena (Massachusetts). Mary argues that the image was displayed on its iron, assured her that "everything will be fine.(AP) 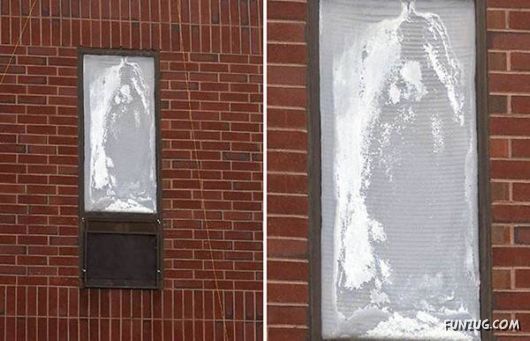 13. Crowds of curious came to Milton Medical Center in Boston to see the image of the Virgin Mary, created by water between the glasses in June 2003. 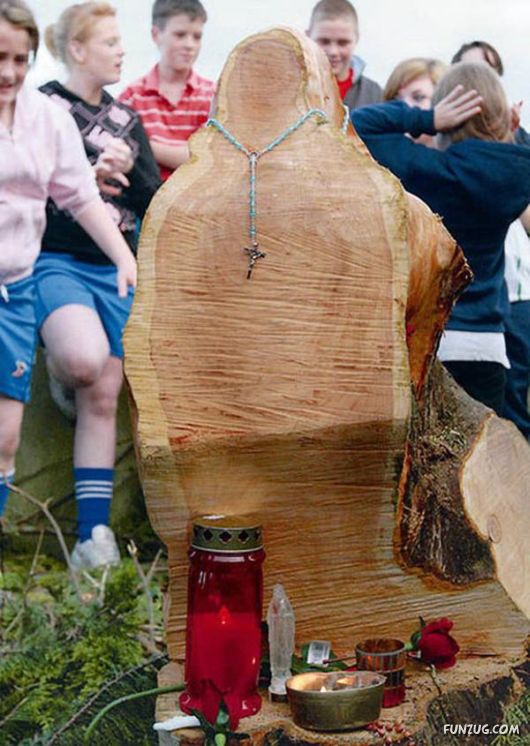 14. Working from County Limerick, in Ireland, found the image of the Virgin Mary on a tree stump sawn in the churchyard tree. (PA) 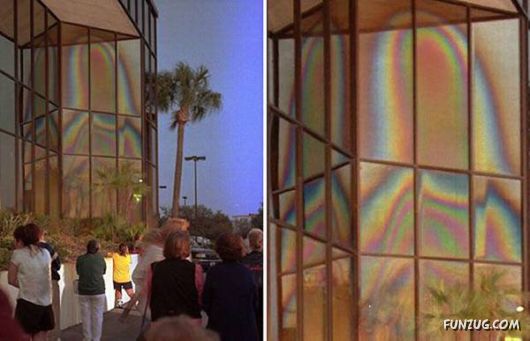 15. The image of the Virgin Mary in Clearwater (Fla.) collected a crowd of people in December 1996. (AP) 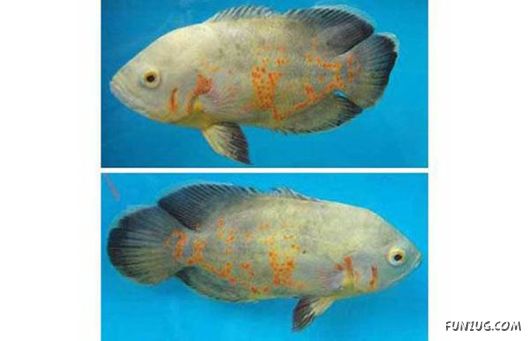 16. This astronotus swims in an aquarium in Rossendeyle, Lancashire. On one side he wrote, "Mohammed," and another "Allah". 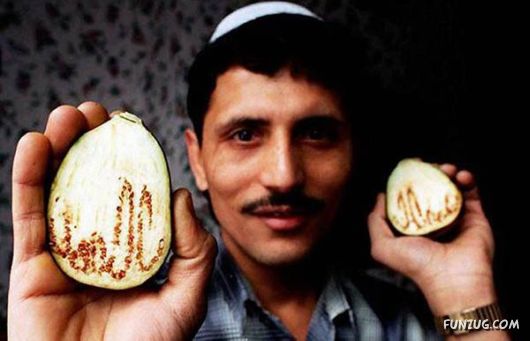 17. At the eggplant in the hands of Salim Patel can read the inscription "Allah". Photo taken in March 1996. (PA) 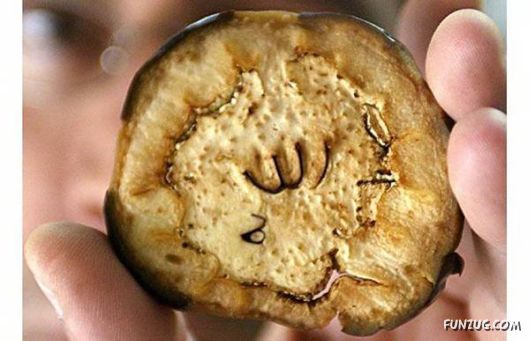 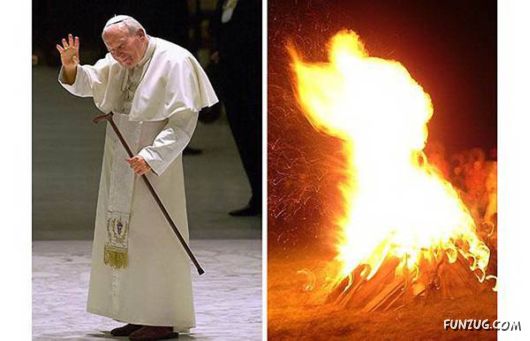 19. Photo taken April 2, 2007 Grzegorz Lukashik in Poland during the night service in honor of the second anniversary of the death of John Paul II. It is clear that campfires resembles the silhouette of the Pope John Paul II. The data from the camera show that photo was taken at 21:37:30. At the same time the Pope had died. (AP) 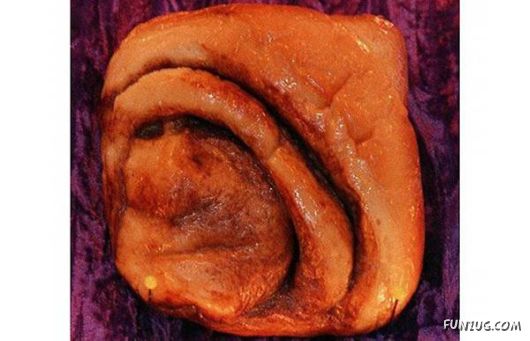 20. Cinnamon rolls from the Bongo Java coffee shop in Nashville (Tenn.), resembling the image of Mother Teresa. This roll was stolen shortly after the photo was taken. (AP)