This may look like another steampunk creation cooked up by someone desperately trying to keep the trend alive, but it?s not. The Apache gun was an actual weapon produced somewhere between 1870 to 1900. As we all know, advances in pocket technology only reached their stride sometime after 1915, so before that time the only way a man could carry all three of these weapons at once was to combine them into a single contraption known as the Apache. At least I?m pretty sure that?s why it was created.

Oddly enough, when folded up the Apache measures just 1.5 inches across, making it almost impossible for a grown person to actually use it as a set of brass knuckles. And that bayonet is even shorter, so if you wanted to inflict some actual damage with it you not only had to be close to your target, but extremely persistent as well. In fact many gun collectors still aren?t really sure what the designer of the Apache was thinking, but that doesn?t mean it?s any less desirable. According to Hell in a Handbasket, the surviving examples are considered valuable antiques and usually start around $4,000. 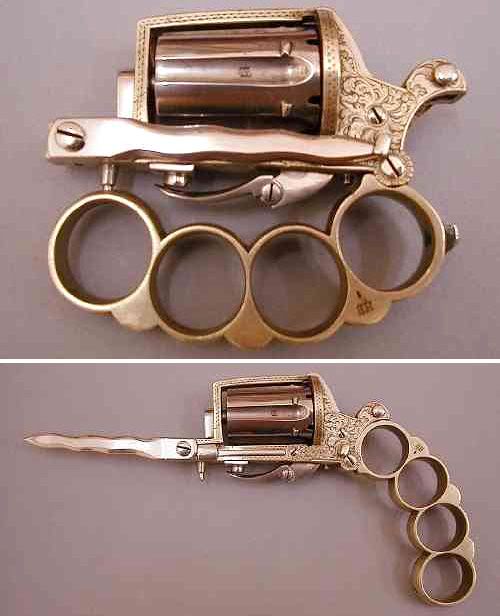