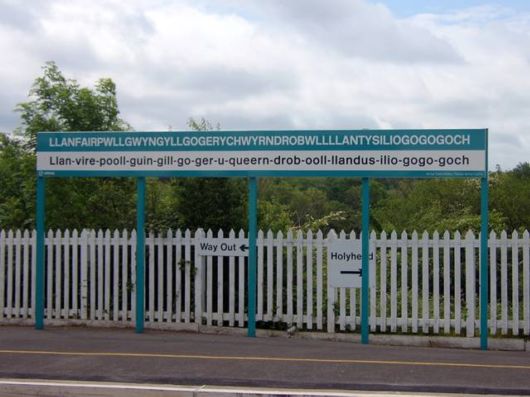 Llanfairpwllgwyngyllgogerychwyrndrobwllllantysiliogogogoch (57 letters) is a large village and community on the island of Anglesey in Wales, situated on the Menai Strait next to the Britannia Bridge and across the strait from Bangor. This village has the longest place name in Europe and one of the longest place names in the world. The short form of the village’s name is Llanfairpwllgwyngyll, also spelled Llanfair Pwllgwyngyll. It is commonly known as Llanfair PG or Llanfairpwll.

According to the 2001 census, the population of the community is 3,040, 76% of whom speak Welsh fluently; the highest percentage of speakers is in the 10?14 age group, where 97.1% are able to speak Welsh.[citation needed] It is the fifth largest settlement on the island by population. Visitors stop at the railway station to be photographed next to the station sign, visit the nearby Visitors’ Centre, or have ‘passports’ stamped at a local shop. Another tourist attraction is the nearby Marquess of Anglesey’s Column, which at a height of 27 metres (89 ft) offers views over Anglesey and the Menai Strait. Designed by Thomas Harrison, the monument celebrates the heroism of Henry Paget, 1st Marquess of Anglesey at the Battle of Waterloo.

The long form of the name is the longest officially recognised place name in the United Kingdom and one of the longest in the world, being 58 characters in length (51 letters since “ch” and “ll” are digraphs, or single letters, in the Welsh language).

The name means: [St.] Mary’s Church (Llanfair) [in] the hollow (pwll) of the white hazel (gwyngyll) near (goger) the rapid whirlpool (y chwyrndrobwll) [and] the church of [St.] Tysilio (llantysilio) with a red cave ([a]g ogo goch).

The name is also seen shortened to Llanfair PG, which is sufficient to distinguish it from the many other Welsh villages with Llanfair in their names. Other variant forms use the full name but with tysilio mutated to dysilio, and/or with a hyphen between drobwll and llan. In Welsh, the initial Ll may be mutated to a single L in some contexts. 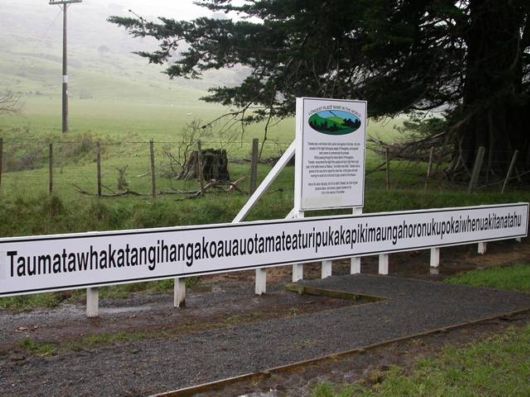 The name would be often shortened to Taumata by the locals for ease of conversation. The New Zealand Geographic Placenames Database, maintained by Land Information New Zealand (LINZ), records the name as Taumata­whakatangihanga­koauau­o­tamatea­pokai­whenua­ki­tana­tahu".[1] It has gained a measure of fame as it is the longest place name found in any English-speaking country, and it is the second-longest place name in the world, according to Wises New Zealand Guide and reported in the New Zealand Herald.

Meaning
The name on the sign that marks the hill is Taumata­whakatangihanga­koauau­o­tamatea­turi­pukakapiki­maunga­horo­nuku­pokai­whenua­kitanatahu which translates roughly as "The summit where Tamatea, the man with the big knees, the climber of mountains, the land-swallower who travelled about, played his nose flute to his loved one”. At 85 letters, it has been listed in the Guinness World Records as the longest place name in the entire world. 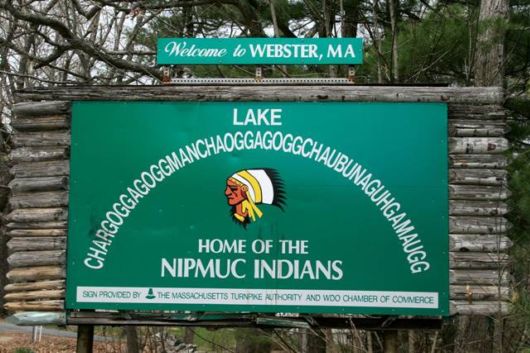 Lake Chaubunagungamaug, [Chargoggagoggmanchauggagoggchaubunagungamaugg, (45 letters)] also known as Webster Lake, is a lake in the town of Webster, Massachusetts, United States. It is located near the Connecticut border and has a surface area of 1,442 acres (5.84 km2).
Name
The lake’s name comes from Nipmuc, an Algonquian language, and is said to mean, ?Fishing Place at the Boundaries — Neutral Meeting Grounds?. This is different from the humorous translation, “You fish on your side, I fish on my side, and nobody fish in the middle”, thought to have been invented by the late Laurence J. Daly, editor of The Webster Times.

Lake Chargoggagoggmanchauggagoggchaubunagungamaugg a 45-letter alternative name for this body of fresh water, is often cited as the longest place name in the United States and one of the longest in the world. It is not spelled correctly on the sign bordering Connecticut.

Today, ?Webster Lake" may be the name most used, but some (including many residents of Webster), take pride in reeling off the longer versions.

This lake has several alternative names. Lake Chaubunagungamaug is the name of the lake as recognized by the U.S. Department of the Interior, however, many area residents, as well as the official website of the town of Webster, consider the longer version correct.

Algonquian-speaking peoples had several different names for the lake as recorded on old maps and historical records. However, all of these were similar in part and had almost the same translation. Among other early names were ?Chabanaguncamogue? and ?Chaubanagogum? . Early town records show the name as ?Chabunagungamaug Pond?, also the name of the local Nipmuc town (recorded in 1668 and 1674 with somewhat different spellings). This has been translated as ‘boundary fishing place’, but something close to ?fishing place at the boundary? or ?that which is a divided island lake? may be more accurate.

?Manchaug" is derived from the ?Monuhchogogoks?, a group of Nipmuc that lived by the lakeshore. Spellings of the long name vary, even on official signs near the lake; in 2009, following six years of press reports, the local Chamber of Commerce agreed to have the spelling corrected on its signs, where a 45-letter version of the name arrayed in a semicircle was used. It did not correspond to any of the two dozen variants in the GNIS.[9] Webster schools use one long form of the name in various capacities.