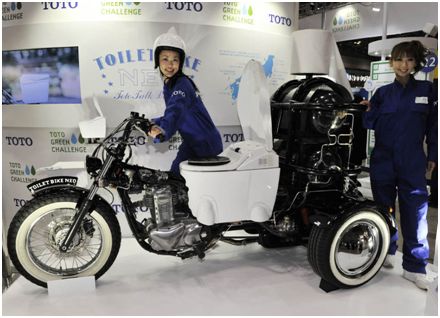 We all need them; we all have them; and we all get a sudden urge to use them the second our film starts in the cinema. Since the inception of modern plumbing and waste disposal, toilets have become that one inescapable object that we will re-visit time and time again. 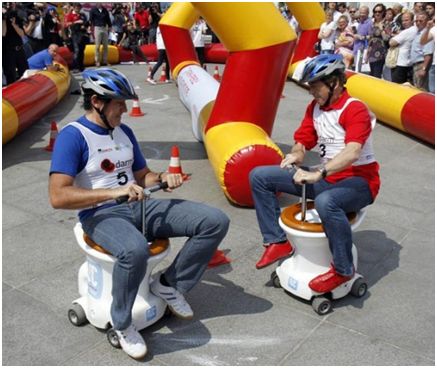 The Armitage Shanks F1 team had a long way to go.

Most are monotonously dull affairs; white porcelain with faux silver features that are hardly worth a second look. Some, on the other hand, have been designed by stalwarts of form over function ? and why not? If you are going to stand in the same place for a couple of minutes, you may as well have something unusual to look at.

So here they are; the 7 most bizarre toilets the world has ever seen. 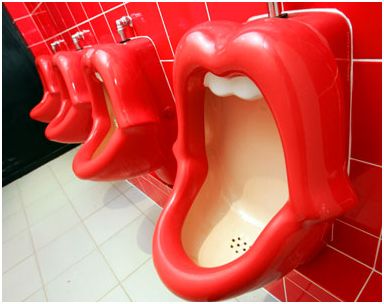 The Rolling Stones merchandise was just starting to get plain weird

The world of glamour and relieving oneself are usually about as far apart as humanly possible, and for good reason. Here, however, they have been fused into something that is both disturbing and overwhelmingly daft. 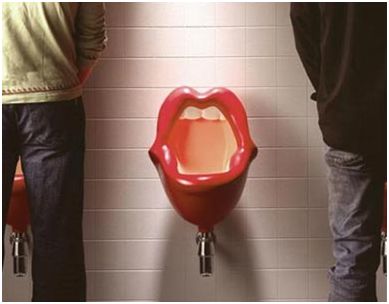 Post Death -Pete Burns mouth was put to good use.

It?s only plastic, but still? those teeth are very off-putting. 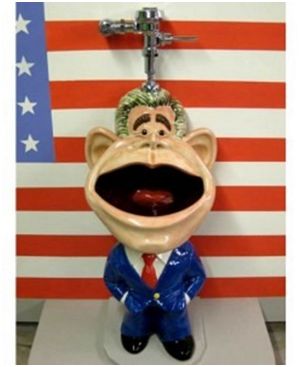 Not exactly everybody?s favourite ex-leader of the free world, George ?don?t call me junior? Bush Jr. has been lovingly re-created here by Clark Sorenson. I can?t tell you for certain, but I imagine one of these resides in the majority of Taliban hideouts? and probably a fair few American bathrooms too. 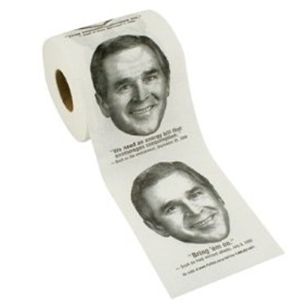 Not pictured ? the George toilet Brush. Google it.

If you?ve not had your fill of George ?I mean it now, don?t call me junior? Bush Jr. related ?memorabilia?, you may want to consider this piece. God bless America. 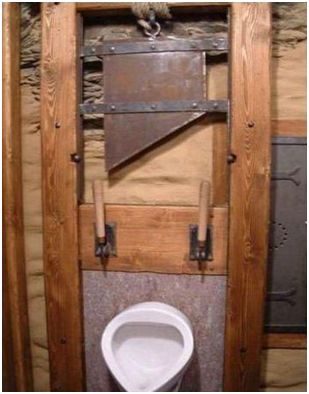 Words are starting to fail me. We imagine the creator of this monstrosity was a rather ill individual who had too much time and a spare guillotine on his hands? as you do. Even though we?re certain it is deactivated and perfectly safe, we still wouldn?t chance it, no matter how good the photo opportunity was. 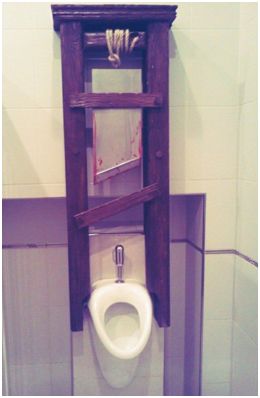 Why are there hotdogs all over the floor? wait a minute.

Some ideas are so good they are copied and improved upon. The design of the original guillotine urinal was so? unique, that it was replicated and daubed with fake blood. It is fake, right? 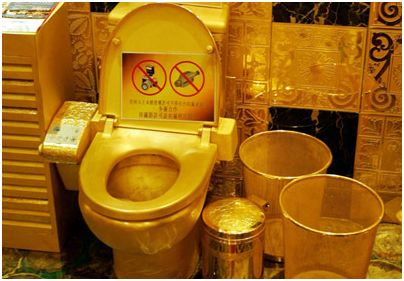 That?s right, a gold toilet. Half the population of Earth wake up and eat nothing, and you have a gold toilet; how gloriously demure.. 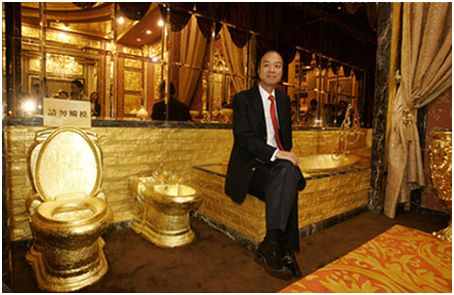 I imagine this is seen as the height of Crapitalism. BOOM BOOM.

Created by Lam Sai-wing, who lead the Hang Fung Gold Technology Group, the precious 24-carat potty was calculated to be worth $5.8 million and has probably never been used. Still, doesn?t he look chuffed with himself. 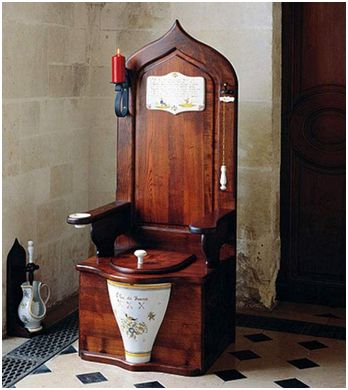 A famous book once stated ?everybody poops?. May we be privileged or impoverished, we all gotta go. Just how we go is sadly determined by our status, and we imagine the owner of this first-class crapper was someone very important. Not ?Werther?s Original? very important either; we?re talking servants and scepter important ? Snoop Doggy Dog important. 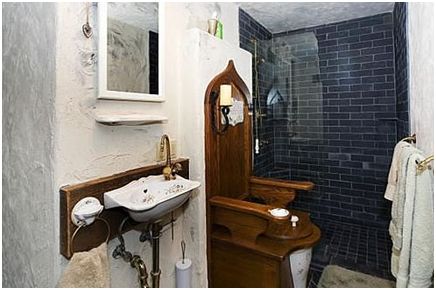 It?s very in keeping with the room?s aesthetic.

The Herbeau Dagobert Wooden Toilet Throne will set you back about $11,000 and is made from a (once rather beautiful) ash tree. If you want to pretend you?re Henry VIII, then nip down to your nearest medieval B&Q and pick one up for yourself. 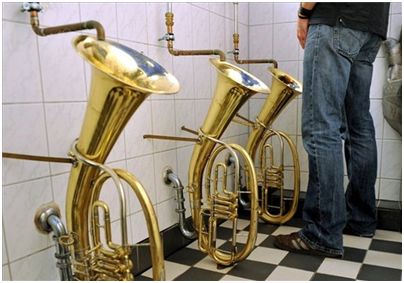 A little appreciation for all the music lovers (and haters) who need to go now, as these urinals have given us the opportunity to express our feelings about Andrew Lloyd Webber and classical music, once and for all. We?ll wager these are a cleaners favourite. 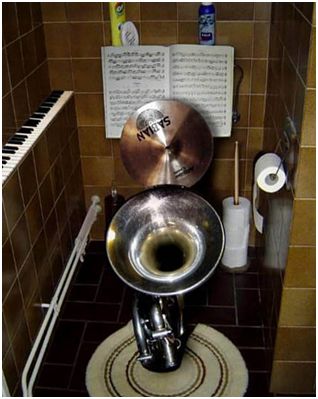 Is that a splash cymbal?

The owner of this bathroom has developed the trumpet toilet and designed his whole bathroom around the concept. You can even have a tinkle on the ivories while you?re in there. 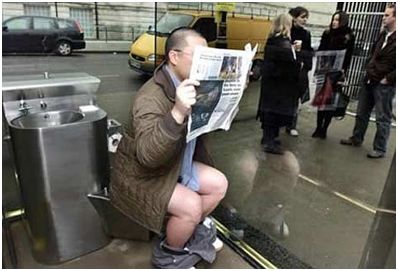 This, believe it or not, is an art installation by Monica Bonvinci and features a toilet cubical set in a cube of one way glass. So, as you do your most private of private business, you can still see the world passing by, whereas they remain utterly oblivious. 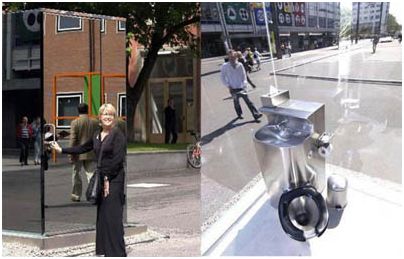 It might not be ideal, but it?s still better guillotine loo.

The piece is called ?Don?t Miss a Sec? and was created to give the user the chance to still feel integrated into the world while relieving themselves. I?m sure that if that toilet could talk, it would tell you some stories.

So, there you have it; seven of the world?s most bizarre toilets. I suggest you rush out and try to find them all. If you?ve enjoyed checking out these crazy crappers, you might be interested to know that in Korea a house has been created in the shape of a toilet. 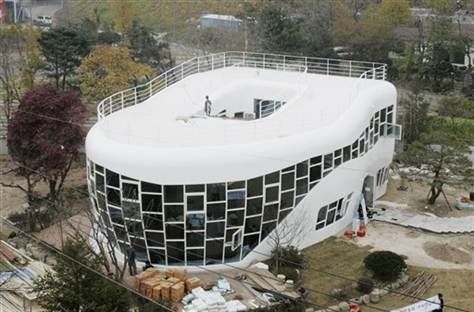 The obesity crisis was starting to get out of hand.

Bet that just made your day. Happy flushing!